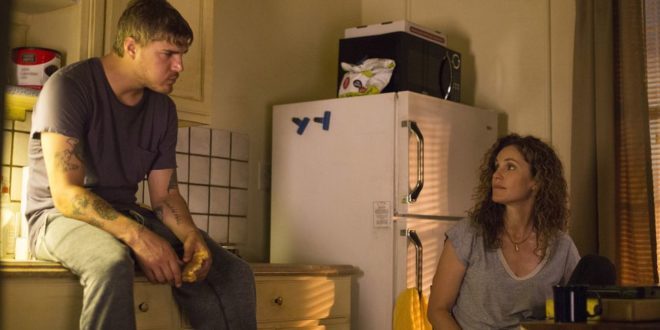 The Leftovers: “Off Ramp” Review

“Why are we losing?”
“Because they’re giving them something…”

“Off Ramp” was a great return to form for The Leftovers and, so far, my favorite episode of the season. Rounding out our check-in with the Garveys, this episode focused tightly on Laurie (Amy Brenneman) and Tom (Chris Zylka).  The mother and son pair reunited at the end of last season following disillusioning partings with the beliefs and practices of both the Guilty Remnant and “Holy” Wayne Gilchrest. In an effort to rebuild their lives and free others from falling under cult influence, the two embark on a campaign to infiltrate Guilty Remnant chapters and deprogram its followers. Tom acts as the mole and identifies potential defectors, while Laurie facilitates their rehabilitation. On the side, she’s developing a manuscript depicting the Guilty Remnant’s operations from the inside, how she fell under their sway and the pain it inflicted on her family.

Even more so than last season, The Leftovers is putting a focus on the myriad ways in which the Sudden Departure has been commodified. So far, this has been exemplified by all the commercial activity surrounding Miracle, ranging from selling small trinkets at farmer’s markets to high stakes bidding for housing in Jarden. The name of Jarden itself may even be a subtle layering of this theme, given that in the real world The Jarden Corporation is a Fortune 500 company, which produces everything from Rawlings baseball gloves and Yankee candles to crockpots and playing cards.

In “Off Ramp” we see some different examples, like a call center hawking “Departure Insurance” – which could actually be fairly practical – and the more abstract effort to sell Laurie’s story. The latter incident comes on the heels of Laurie learning that one of her recent defectors killed herself, and her family, in the wake of returning to a banal life that insufficiently acknowledged the departure.

The first clue to how bad this meeting is going to be starts with “I think this is going to be the next What’s Next?,” referring to an opportunistically published self-help book about moving on from the departure. For Laurie, her writing went beyond a crass attempt to cash-in; it was a cathartic confessional that aimed to prevent similarly distressed leftovers from making the same mistake she did. Amy Brenneman is wonderfully emotive here, transitioning from subtle expressions of irritable disappointment, to full out rage. The editor-in-chief of her would be publishing company (Mark Harelik) is transparently rapacious at the prospect of selling this story and his fumbling attempts to recount her narrative – that he likely read only half of – with the suggestion it needed more clarity around her feelings and emotion releases the anger Laurie’s kept simmering below the surface the entire episode.

Of course not all the profit is financially oriented. There’s no shortage of characters in The Leftovers whose new sense of self in a post-departure world is wrapped up in exploiting their perceived abilities or knowledge, and the influence it affords them. After this week’s episode, Laurie’s Guilty Remnant protégé Meg Abbott (Liv Tyler) may prove to be the most disturbing example yet of these figures. Having lost her mother the day before the departure, she was denied a personally oriented grief, feeling powerless and cheated, as it was subsumed by the world’s larger loss. We saw this anger gestate last season, expressing itself in fits and starts. Now, as the Guilty Remnant’s presumable new leader, that fury has melded with a lust for maintaining power. Her rape and threatened immolation of Tom are aggressive rebukes to Laurie’s efforts, which inherently threaten her new standing.

“Off Ramp” ends with Laurie and Tom crafting a messianic persona for the latter Garvey, something they believe can help fill the void in recently deprogrammed defectors. It’s a fairly shortsighted move from two people who should know how badly an appeal to the basest human insecurities could play out. Having said that, it’s not quite what I would have expected and in a world where NCIS is the number one rated drama, that’s more than enough to satisfy me.

A content junkie of the highest order. New Jersey native transplanted to San Antonio. Will watch anything with Abe Vigoda.
@flynndonjohnson
Previous The Walking Dead: “JSS” Review
Next ‘Dancing With the Stars’ Review: Nobody Puts Bindi in the Corner

In "The Cause and the Cure," HBO's 'I May Destroy You' gets fully aware of what family vs. friends mean... in spite of all them.