‘Dancing With the Stars’ Review: Nobody Puts Bindi in the Corner

Oh, what a fantastic week on Dancing With the Stars! It was “Iconic Dance Week”, where the couples did modern recreations of famous dances from films, TV, and music videos. This was unbelievably entertaining, and featured show favorite, Leah Remini, filling in as co-host for Erin Andrews this week. It also featured the icon Olivia Newton John sitting in as a guest-judge, and loads of wonderfully inventive choreography. But before we get to this week’s episode, last week, I was unable to fulfill my duties as your trusty TV reviewer, due to a prior commitment. So, here now, for your reading pleasure, is a one-paragraph highlights version of what happened on last week’s show:

Guest judge Maksim Chmerkovskiy showed up with oddly 1980’s feathered hair. Stars were put with different pro dancers, voted by audience, for “Switch Up” Week. Host Tom Bergeron returned after being home the week before to be with his ailing dad. Hayes went through puberty live on the show when his voice cracked like Peter Brady over and over. Bruno used the term “Kangaroo-ish”, to describe someone’s dancing style. Paula Deen was a  pain in the butt with her new pro dance partner Mark, immediately demanding hugs and love and patience from him. Paula then flashed the judges by lifting her skirt/dress up, and they almost fainted. Bruno told Alek to “caress” the Rumba. Tom Bergeron asked “Can we keep Bindi for next season too?” Tom Bergeron ended the show by saying that this was his dad’s favorite show and he never missed an episode, and he would like to think “that he is still watching now.” We are so sorry for your loss, Tom.

Hayes / Emma: They were assigned Grease, and Hayes literally said “What’s that?” OH MY GOD. Whats that?? Whats that??? Are you serious, kid? I know you are 2 years old and know nothing about anything that happens over 6 seconds, but how do you not know this play or film or SOME version of it? How have you never even heard of it, ever? Ugh. Anyway, they recreated the famous last scene from the film, to the song “Youre the One That I Want”. The set and costumes were pretty much right on, and it was a great recreation. Olivia said “you kept in all the elements, great job!’ Horny Carrie Ann told Hayes “you are such a stud!” Um, relax there, lady. He is FIFTEEN years old, and besides, he can only do things for 6 seconds before he peters out. Get it? That was a VINE joke. Backstage, Leah said the word “amazing” literally 14 times. Scores were 8/8/8/8. Len woke up from his nap he was taking last week, just in time for this weeks show. Upon seeing Hayes and not knowing who the hell he is, he promptly fell right back asleep. 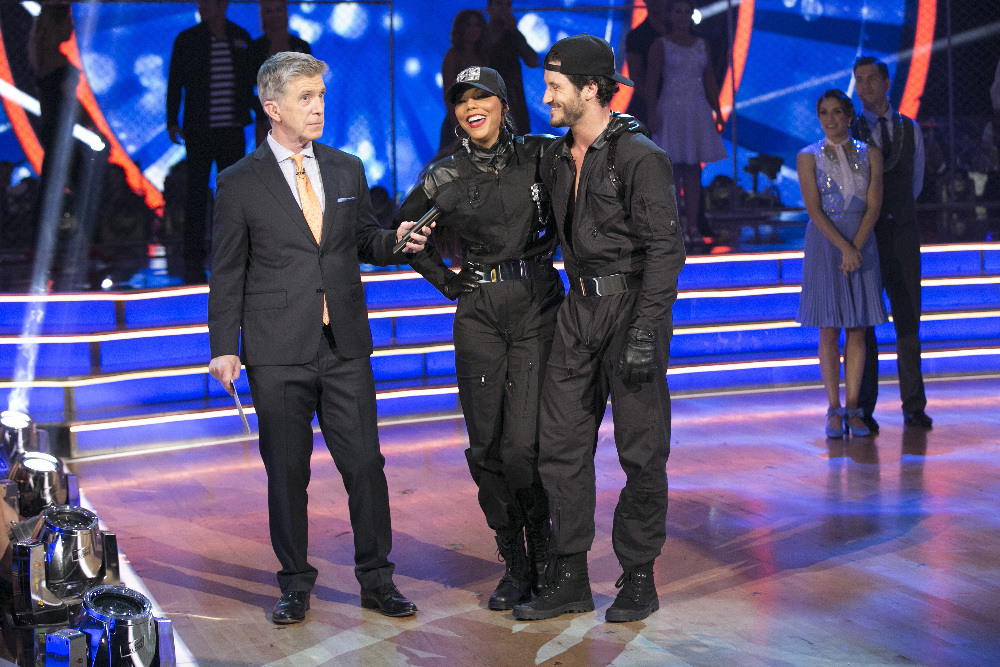 Andy / Allison:  This was probably my favorite dance of the night, personally, just because it had so many elements, and I loved the way Allison’s choreography managed to include so many different dance moves and moments from the film, all in one dance routine. She included the raincoats, the couch, and even two sets of stairs for them each to dance/walk up and down as part of the number. It was awesome. The song, was, of course, “Good Morning”, from the famous and wonderful film Singing In the Rain. The couple had the honor of meeting Gene Kelly’s widow, Patricia, for some tips and history on her husband’s legacy. So cool. Julianne told Andy “the other guys need to watch out!”, while Carrie Ann said it “felt just as good and fresh as the original!” Backstage with Leah, Andy said: “If you’re listening, Gene, I had a great time getting to know you this week. It was an honor.” Very sweet. Even sweeter were the perfect scores. 10/10/10/10. Len was at home dancing around his living room with a bottle of prune juice. 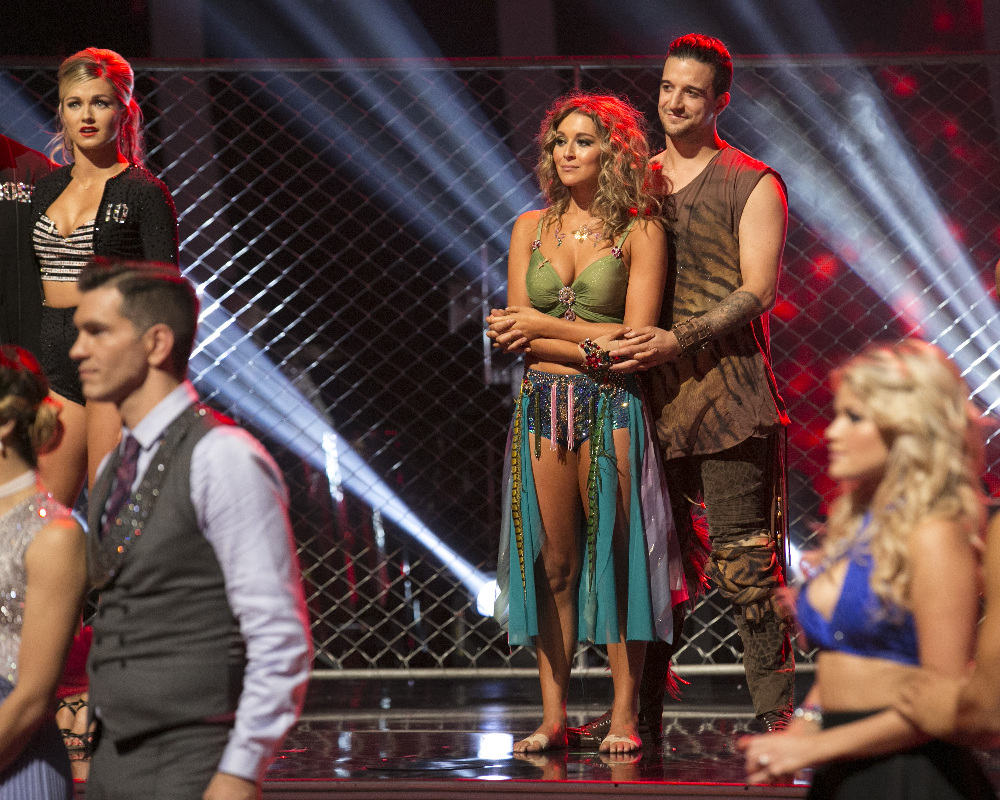 Alexa / Mark: They did the famous Britney Spears performance from the Video Music Awards, of “I’m A Slave 4 U.” This, of course, includes a real live snake, which I’m actually surprised they pretty much forced upon Alexa. Cant they just use a fake one? Is it really necessary to make this woman dance with a live snake around her neck? I’m sorry, but if I was on the show and they said I had to dance with a snake, I would be runnign so fast for the door, you wouldn’t even see me. During rehearsals, Mark said “the most important thing is to not upset the snake.” How about the most important thing being DONT USE A SNAKE!!!!??? Bergeron hilariously said: “Say hello to their little friend!” Mark worse the worst wig of all time for this dance, and apparently the judges didn’t find the dance as sexy as it was supposed to be. Carrie said “you missed the essence of Britney with that” Leah said backstage that people online had already started a drinking game to drink each time she says “amazing.” So it wasnt just me noticing that. Scores were not quite as amazing at 8/7/7/8.

Bindi / Derek: “Nobody puts Bindi in the corner”. That is what Derek said to Bindi, upon learning they would be re-creating the classic, iconic “Time of My Life” dance from Dirty Dancing. And to help them out a bit with the all-important lift above the head, was the original “Baby”, Jennifer Grey. In footage, Derek said he had never been more nervous for a dance in his life, because lifts are not his specialty. But just like in the film, the two took to the water to rehearse the lift again and again, and they got the dance down to perfection. I felt like I was watching the movie all over again. Olivia called Bindi “enchanting”, and Bruno stood up and screamed “My little star has gone SuperNova tonight!” Alrighty then. Scores were perfect at 10/10/10/10. Len changed the channel at home to “Murder She Wrote.” 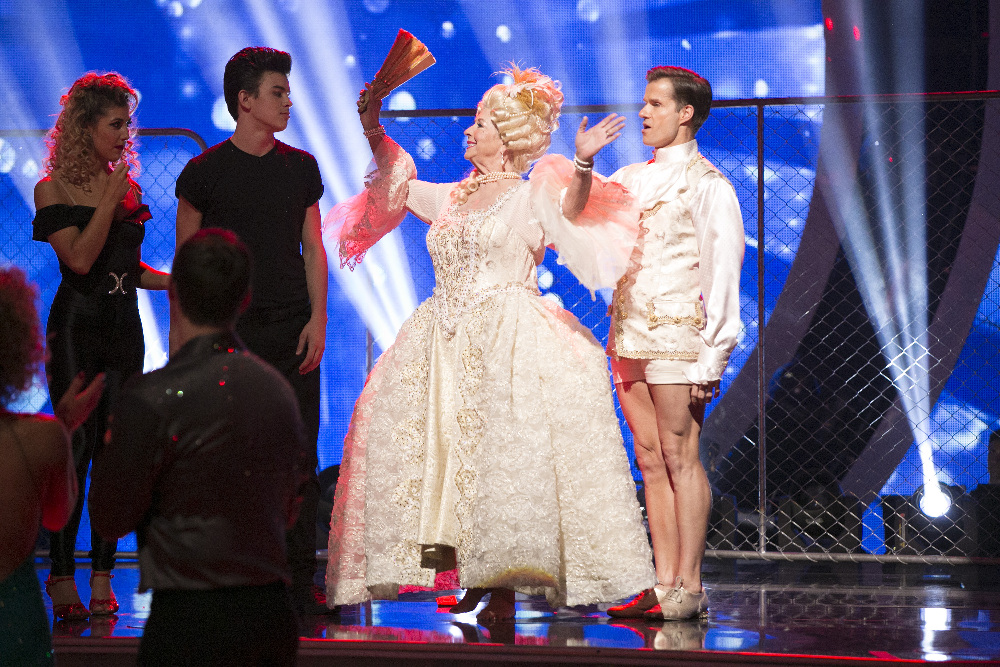 Paula / Louis: I don’t know about you, but whenever I think Paula Deen, I think MADONNA! It’s almost like they are the same person … except not at all. Whoever gave her “Vogue” for her song must have been high on lead paint at the time, because even SHE knew it was a bad idea. “We don’t have one thing in common, y’all. I don’t wear cones or pose in the nude. Nothing.” Also, she dances, while you are forcibly dragged across the dance floor in your bloomers. Basically, they recreated the performance from the MTV Awards, so Paula was able to hide in the larger than life costumes and the many people performing with her She did lots of hand movements – her wrists got a good workout, and her legs shuffled along as usual. Tom Bergeron hilariously mocked Louis’s short tight shorts by announcing “men’s shorts now available at stuffasockinit.com “. The judges seemed speechless at this point, Paula kept cracking up laughing at absolutely nothing, y’all, and backstage, she screamed about 7 times in a row to nobody: “We did it! We did it! We did it! We did it!” Did what? Walked across the dance floor to music? Also backstage, when Louis randomly went underneath Paula’s dress and poked his head out during the Leah Remini interviews, Leah yelled “Yeah Paula!  Ride it! Ride it!” Paula then motioned physically as if she were … well …. riding Louis. It was even more disturbing than it sounds. Why? Just …. why? Scores were 6/6/6/6, and Len turned the channel back just in time, then promptly upchucked in his vegetable soup.

Carlos / Witney: So, their assigned song was from the film Magic Mike, and it was the song “Pony.” As Carlos so poignantly said in the footage: “It’s a song about a bunch of dudes stripping.” He was very hesitant to do this at all, because he felt uncomfortable with the graphic nature of the song and lyrics and movements he was doing. He brought up having a strong faith and God in his life, and how it felt wrong to be so raunchy. Witney convinced him he is playing a character, and it would be fine if he embraced it. The dance was pretty darn hot, as he thrusted about shirtless and oiled up with a few other male dancers too. Bruno was on his feet and experiencing a standing ovation in his pants, if ya know what I mean!!!! “On your knees and beg for forgiveness. Repent!!!” I don’t know about you, but you’ve answered MY prayers!” He is hilarious Julianne said he nailed it, and Olivia joked that maybe he missed his calling and should have been a stripper. Backstage, Leah opened by saying: “So, whats up with church tomorrow?” So funny. Scores were 10/9/9/10, and Len had to have his eyeballs removed so he could no longer see such shocking things on TV.

Nick / Sharna: This couple got to re-create the epic dance number from Saturday Night Fever, to the song “You Should Be Dancing”, by the Bee Gees. I gotta say, the live performance , both singing and musically, by the show’s band, was right on with this one. It’s not easy to recreate Bee Gees songs, and they did it in the exact tone of the original. This dance was a total blast, and again, it felt like I was watching the movie all over again. Nick loved playing Travolta’s role, and he did great with it. Carrie Ann said some crap about him going in and out of character, which I did not see at all. Julianna called it a “true reinvention of what that was. Outstanding.” Bruno simply called it “brilliant.” Scores were 9/10/10/10, because Carrie Ann is a party pooper.

Alek / Lindsay: They were assigned Elvis Presley’s “Jailhouse Rock”, which was another classic scene, and in this number, Alek did capture the look of a young Elvis. The dance itself felt a bit low energy, or it seems like he isn’t as into being on the show ever since the Oregon shooting. And who could blame him? I could be wrong here, but he just seems off somehow. Scores were 8/8/7/7.

Tamar / Val: This was so beyond cool. Their assignment was the awesome music video version of Janet Jackson’s “Rhythm Nation.” Aside from the drama that always seems to come from Tamar, (this week she was sick all week-long ), this was really cool on many levels. The judges loved it, and Bruno told her that he couldn’t tell her apart from the actual pro dancers – it felt like she was leading. Scores were perfect ten across the board.

GOING HOME: Sadly, or maybe not so much, it was Paula Deen who was sent home this week, y’all. Her parting words, other than to laugh like a hyena for no apparent reason over and over, were “Ummm soooo excuuuuhhhted ” (that would be “I’m so excited ” in Paula-speak). “I get to go see my grandbabies!!!!” Okay then Paula. Enjoy those grandbabies. Be well.

COMING UP NEXT WEEK:

@theworkprint
Follow
Previous articleThe Leftovers: “Off Ramp” Review
Next article‘Room’ Review – “It’s Still Just You And Me And That’s Okay”