Eleanor and Tahani’s friendship continues to blossom while trying to save Eleanor from The Bad Place and Michael learns the truth about Jianyu in last week’s episode “What’s My Motivation.”

The “Save Eleanor” dream team has convened in Michael’s office with their brand new shiny member Tahani. Tahani has made it her mission to ensure that her new best friend is not sent to eternal damnation in The Bad Place, and nothing stops Tahani when she is on a mission. She devises the perfect plan: Eleanor will perform good deeds in The Good Place to increase her “Good Deed” points and prove that she belongs. Michael has even constructed a point tracker fit bit so Eleanor can see how close she is to hitting The Good Place average of roughly a 1,000,000 points. The only downside though is that her current point total is at -4,008. 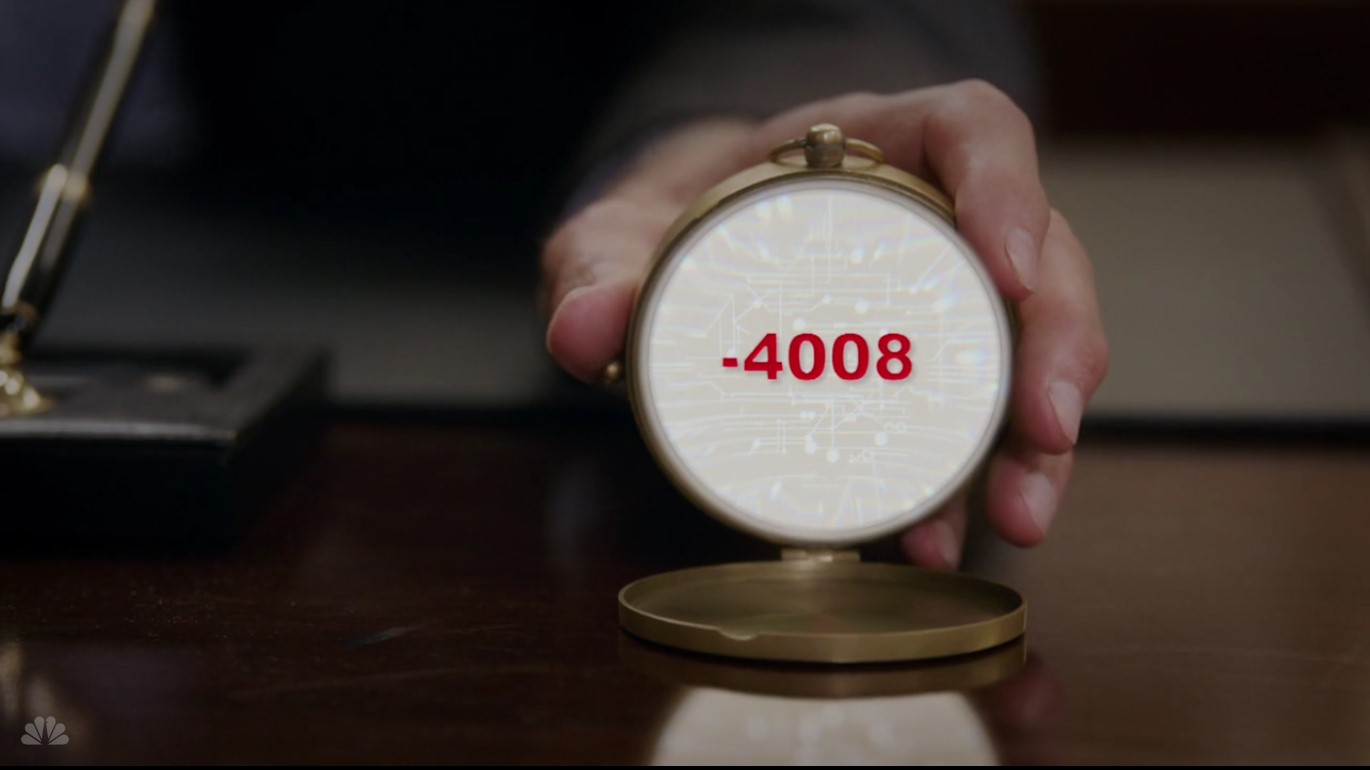 Tahini leads Eleanor to the Yogurt shop to commence the “Eleanor Good Deed Tour” by greeting all of the Yogurt Shop Patrons:

Eleanor: “There has to be something bigger I can do than holding the door and waving. There’s no way every Walmart greeter is in The Good Place.”
Tahani: “Wal….mart?”
Eleanor: “It’s a place regular people go. You haven’t heard of”

After holding the door for a dozen or so people there is no increase in her total score. Tahani correctly concludes everyone hates her and therefore she is receiving no points (I really do not understand this logic here). Tahani has the perfect plan to remedy this: a focus group.

So I know Tahani calls this gathering a “focus group” but in no way shape or form is it a focus group. A focus group would be having a group of people discuss with each other, and a moderator a specific topic where there is a structured or semi-structured outline of questions. This was basically an open forum for the neighbors to air their grievances over why they hated Eleanor. One resident is upset because she flew into a dead turkey carcass during the trash storm; another is angry because the sinkholes destroyed her cafe twice; a third man is upset because he also fell into said sinkhole.

This time Eleanor comes up with a plan to fix her problem, she is going to throw a party to remind the neighborhood of how good The Good Place was before she screwed it all up. That night she invites everyone to a lavish party at Tahani’s place to apologize for the pain she has caused. But before she speaks to the masses, Tahani delivers an amazing introduction:

Tahani: “She’s kind, she’s humble. She’s the Walmart of friends. (to Eleanor) Did I use that word right?”

Eleanor takes the stage to apologize, yet again, but no one seems to be accepting her apology. One woman even asks “What can you possibly say to us that will make up for your actions.” Eleanor has no good response to this, and with a shrug of her shoulders and an awkward smile replies:

Someone in the back lets out a giggle and just like a slow clap the laughter spreads across the room and all of Eleanor’s transgressions are forgiven. Even with this blanket forgiveness, Eleanor’s point total has barely increased. Finally, it hits Eleanor, any good deeds she performed were for naught because her motive was corrupt. At the core, she was only being nice to people so she could stay in The Good Place, and therefore they were not true good deeds. The only way that Eleanor can get those good deed points is if she leaves The Good Place. 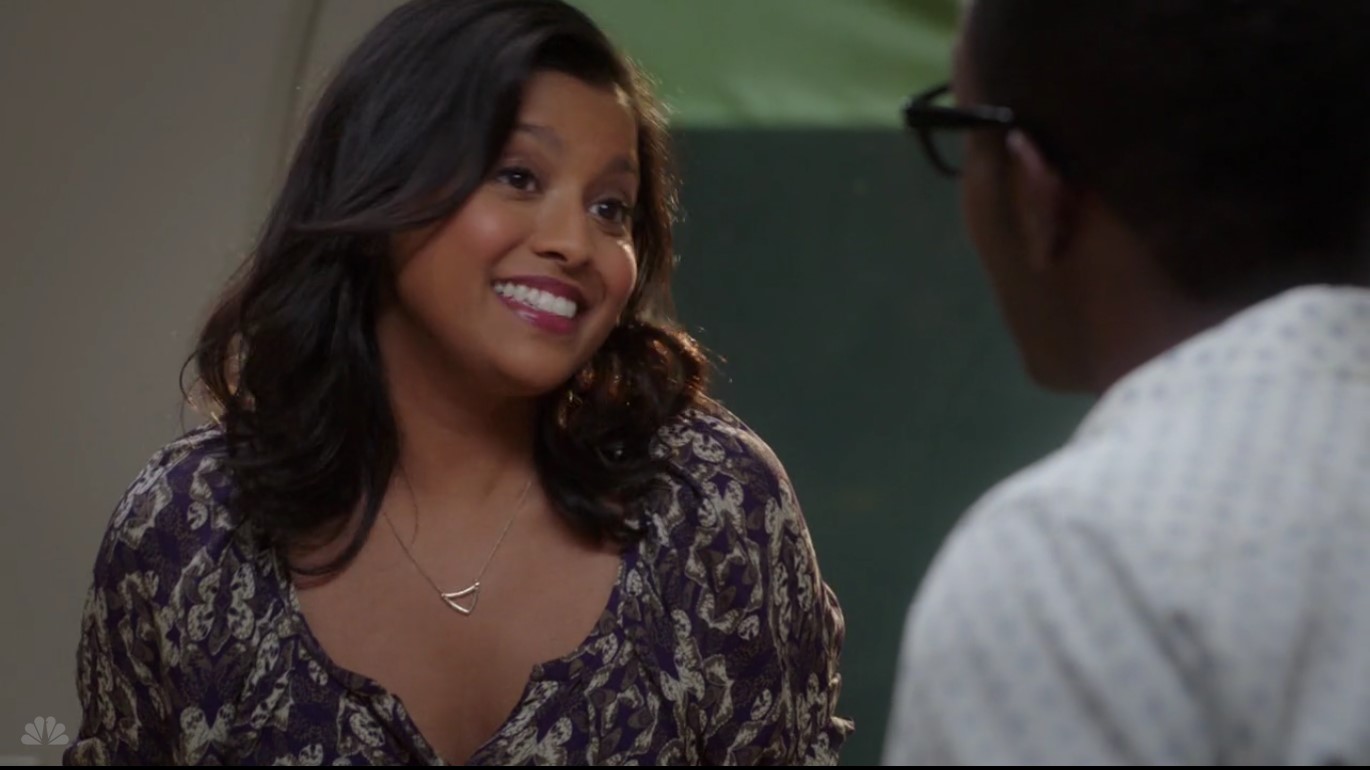 This was a yawnfest of a subplot. It all begins when Real Eleanor disrupts her daily morning ritual with Chidi by placing a note saying “I Love You” inside of her soulmates soft-boiled eggs (maybe it’s medium boiled, I have no idea). After she explains that it is she, not the egg, that loves Chidi he begins to freak out.

He goes straight to Eleanor and explains his whole dilemma starting from the very beginning of time:

Eleanor: “Dude, if you do the Chidi thing where you have to re-explain the entire world before asking a question, we are both going to grow old and die again”

Chidi is having a moral dilemma about whether he actually loves the Real Eleanor or if him assuming that she is his soul mate is clouding his judgment. I think it is safe to say that after this interaction, Real Eleanor was NOT his pick for soulmate at the end of last week.

Jianyu is upset because he doesn’t want to hide his love for Janet.

Jason: “I wish we were in Florida, kissing outside near a swamp. With some old tires in it, watching a flamingo trying to mate with somebody’s old gun. I want us to have the life we deserve.” 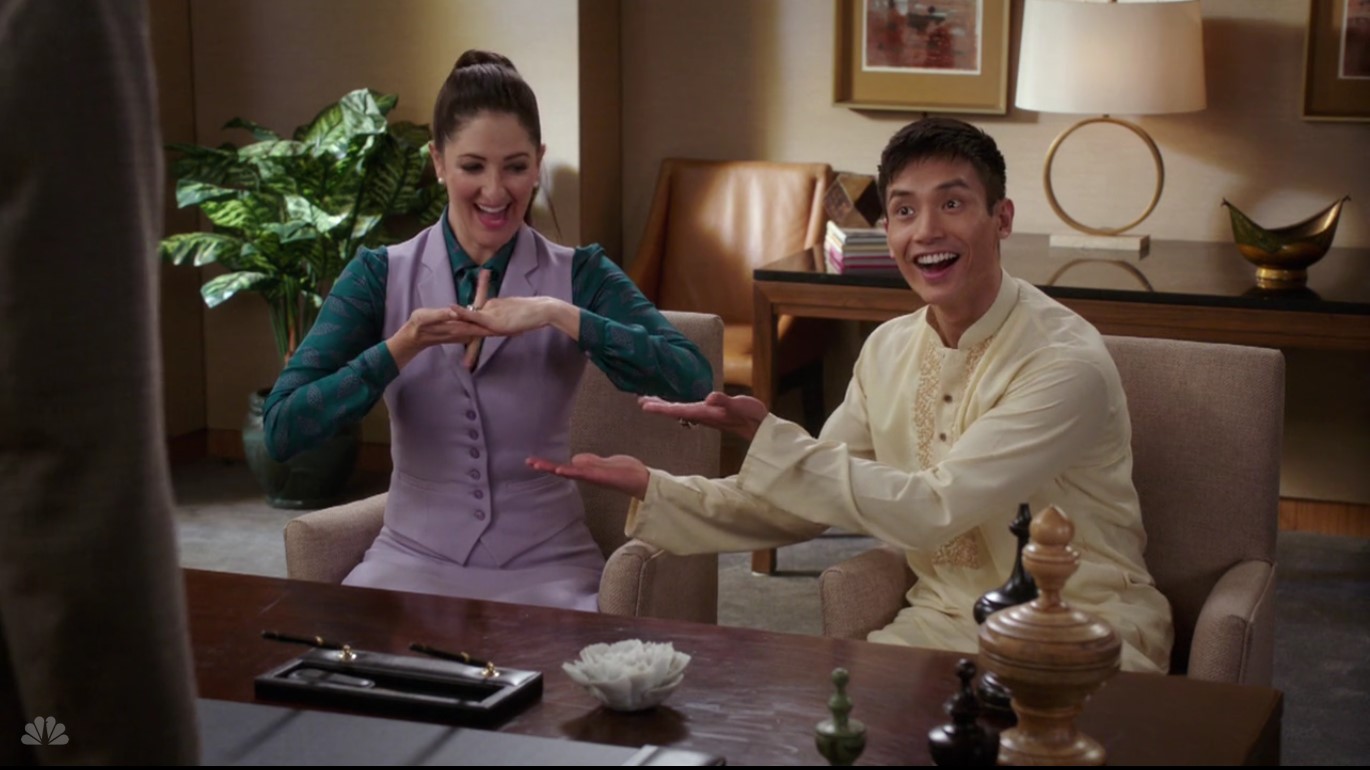 Just like the life he deserved when he was alive and living in his hometown of Jacksonville, “one of the top then swamp cities in Northeastern Florida.” Jason knew that if he wanted to become more than a “pre-successful DJ” he would have to move down to Miami, but that would require some dough. So, Jason devises a foolproof plan with his buddy Pillboy to get said money. Here is the plan: First, Jason will hide in a safe that the pair somehow acquired. Second, Pillboi will pose as safe installing Mario wannabe and install the safe in the office of a pizza joint.

Pillboi: “Just point to where the guacamole man is and I’ll install the safe.”

I am not sure exactly how they planned to steal the money or anything after that because their plan is thwarted when the cashier calls the cops. And sadly for Jason not only did his plan not work, but he suffocated to death while waiting in that safe. (I have to say, Pillboi posing as a safe installer cracked me up all of the five times I rewatched that scene.) 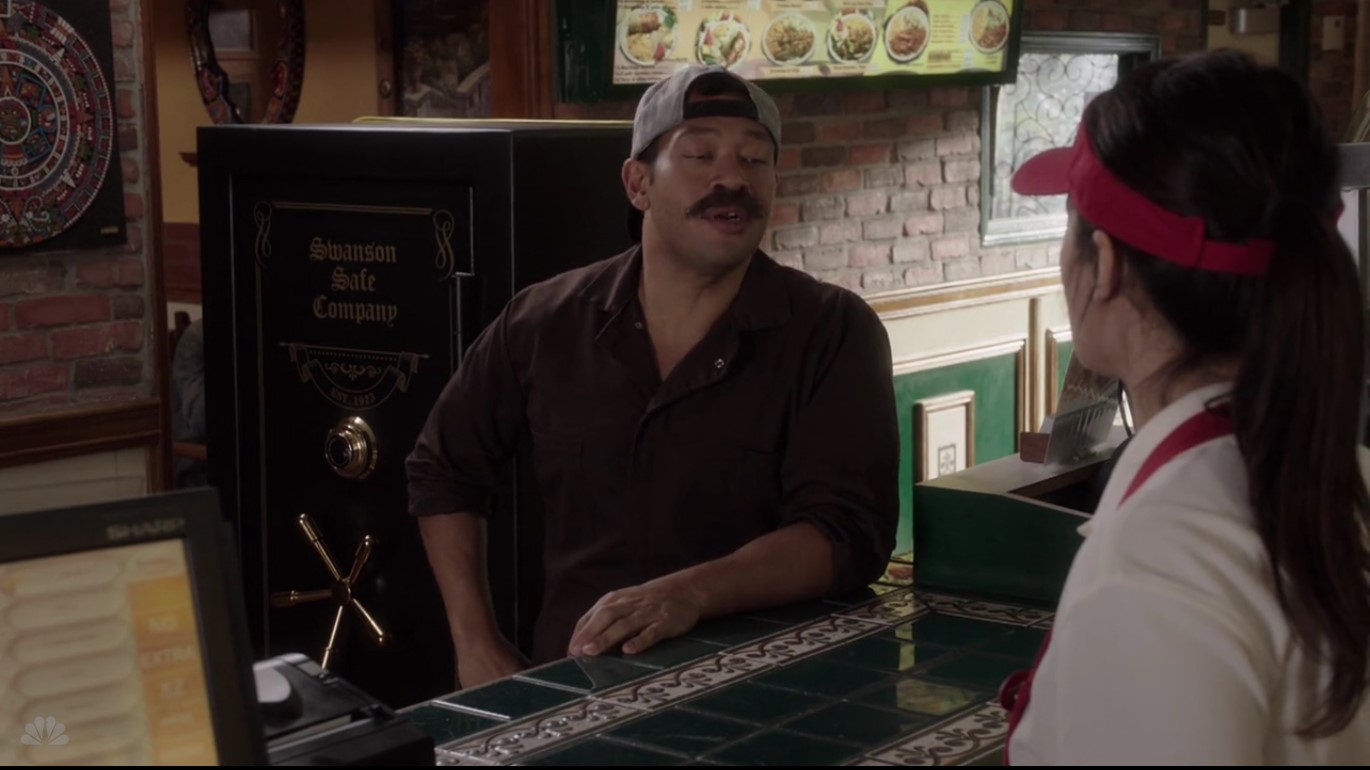 But Jason wants to make the most of his time in The Good Place and he convinces Janet that they should tell her “dad” Michael about their marriage. Michael does not take the news well at all. He is confused, upset, angry and trying to understand both how this could happen and how he could be such a huge failure. He makes it clear that he in no way supports their union and after threatening to reboot Janet again, the Jason and Janet decide to make a run for it.

Jason and Janet arrive at the train station where they find Eleanor who is also trying to run away. Janet reveals that there is actually a neutral place, outside of both The Good Place and The Bad Place where Mindy St. Claire lives. That is where the three of them should escape to. During this revelation, Shawn the Judge disembarks from the train and Eleanor and co. take this opportunity to hijack his train and steer it straight to Mindy St. Claire’s.

@theworkprint
Follow
Previous article
Nintendo Switch – Why the hate? Just wait!
Next article
Explore The Magicians Hall of Magic, You Won’t Regret It