‘The Fosters’ Review: More Than Words

This week’s episode of The Fosters was jam-packed as “More Than Words” tackled trans, race, and LGBT youth issues. It also served a very bland side dish of Mariana.

Mariana is still trying to dodge Wyatt’s incessant texts, where he asks if he did something wrong. If getting your ex-girlfriend’s sister drunk and then sleeping with her is wrong, then the answer is yes. Out of nowhere though, Mariana’s actual boyfriend, Matt, waltzes into her room for a surprise visit. He ditched his band for the weekend to drive down the entire west coast to be with his boo. Mariana does not know how to handle Matt being back and just acts like a bitch to him the entire time. It was pretty much a Mariana bitchfest. She complains that all Matt wants to do is have sex (which was not true). She also tells him she doesn’t want to feel guilty about Matt not sleeping with other people during his rock tour. Mariana, I’ve got cheese and crackers to accompany your whine. Please shove them in your face so you can stop talking. 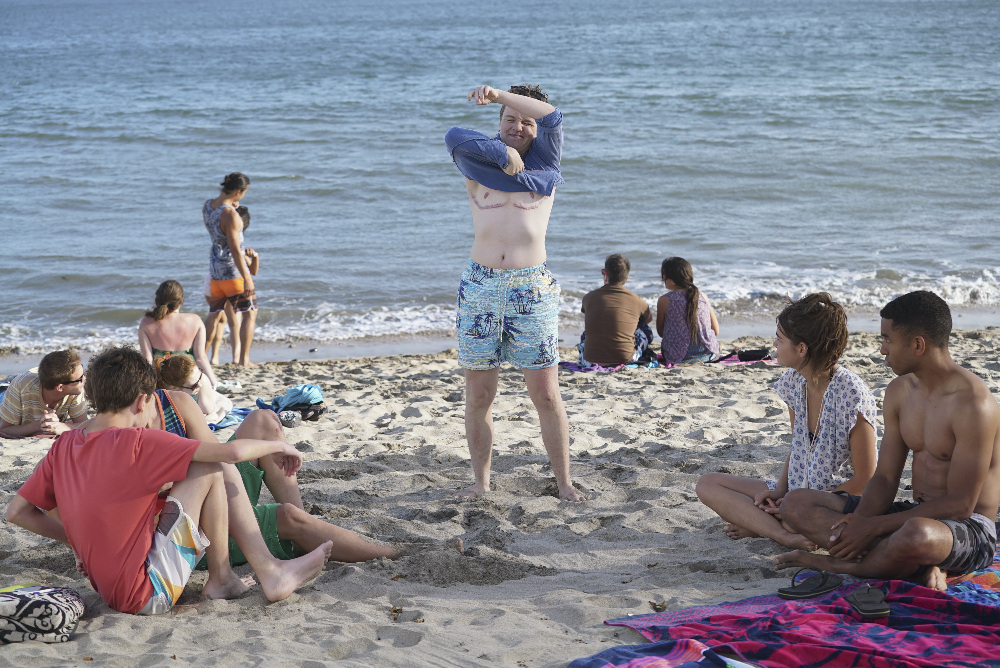 All the kids decide to head to the beach because thankfully they have Saturdays off from Summer school. While sunbathing they run into the one and only Cole! Yay, Cole! Cole joins the Adams-Foster gang, and tells them all about the LGBTQ prom that he is planning for that night. Callie invites herself as Cole’s date, and tells Jude and Connor they are coming.

What makes this scene special is Cole. Tom Phlean, the actor who plays Cole, is a transgender male, and he is one of the handful of trans actors that actually plays a trans character. The fact that they had him take his shirt off, and not show an ounce of self-consciousness when everyone saw the scars on his chest was amazing. Out of the handful of shows that have a transgender male character, I am unable to think of a single one that has shown him take off his shirt and have visible post-operative scars. The visibility that The Fosters gives to the LGBTQ community as a whole never ceases to amaze me.

Later that evening, everyone gets ready for prom and arrives at Lena and Stef’s house for the pre-prom photoshoot. Callie even found this spectacular dress a vintage store while strolling home from the beach earlier. Wait what? Callie just randomly happened upon a dress that fits perfectly, and looks super expensive, while walking home from the beach. Either that is the dress version of the Traveling Pants or I am calling BS on Callie’s story. Callie looks hot, which everyone points out, and it is obvious that Cole is smitten. Sadly, Callie has to put Cole down easy, and tells him that she is only into guys that are her foster brothers.

Jude and Connor are not having the time of their lives at the LGBTQ Prom. Jude is still struggling with being labeled as “gay” or being labeled as anything for that fact, and being at a function that is partially defined by labels is not helping. What also doesn’t help is that they run into these two assholes to start off their night:

After Connor introduces himself to these strangers as “Connor, gay,” it is Jude’s turn. Jude introduces himself as “Jude”since, you know, that is his name and that is how most people introduce themselves. Lenin gives him a quizzical look and responds “Hey Jude. So, um, what are you?” Seriously, Lenin? Who/what the fuck are YOU? The whole point of an alternative/LGBTQ prom is for it to be inclusive for all people period, especially those who are left out of the mainstream prom culture. And here Lenin is, forcing this young, fourteen year old boy to define himself in order to be in your presence.

Jonah proves that he is officially the worst person ever when he pulls Connor aside to tell him that Jude not liking labels equals Jude not being sure if he is gay because, and I quote, “If a guy can’t say he’s gay, that means he’s not sure he is.” Who does this guy think he is, the gay whisperer? If a guy can’t say he is gay, he is not gay, and therefore will break your heart? There is SO MUCH bi-phobia oozing from this guy. How do bisexual individuals fit into this airtight theory Jonah has concocted. He is essentially saying that if a guy is unsure that he is only attracted to males, or attracted to both males and females he will break your heart? But, moreover Jude is a fourteen year old boy. He is in love with another boy but trying to figure out who he is as a person because he is a teen! A fourteen year old boy does not need to define himself yet!

Cole pulls Jude aside and the two have a truly insightful and thought-provoking discussion about labels. Cole admits that while labeling yourself may feel constraining, for many people it is liberating and creates a form of community. Cole’s label is what got him into a LGBT group home where he finally could just be himself. Jude realizes how lucky he is to be living in a super liberal  two mom household, and starts to understand the power of labels. 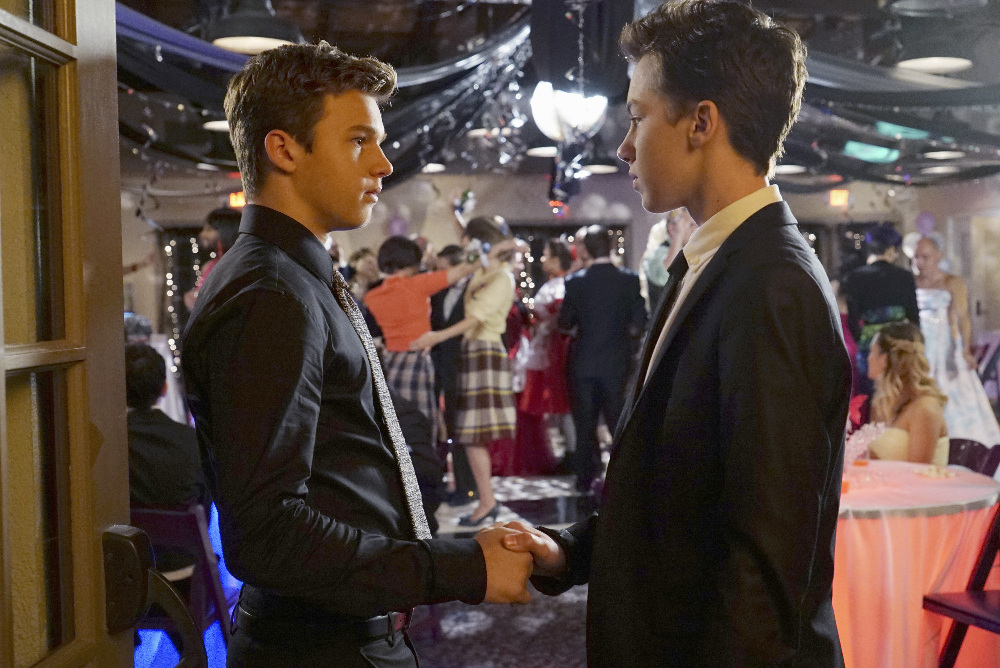 Brandon is still struggling to produce the perfect fugue for Kat, the diva, to perform. After realizing Kat will literally call everything that he hands to her shit, Brandon decides to type “unknown Bach Fugue” into google and have Kat play that for the Dean of Music. Upon first viewing, it seemed like Brandon was trying to pull off the most half-assed plagiarism plot in the world, but Brandon is actually much smarter. He purposely did this to show that Kat would even call Bach’s music shit if she thought it came from Brandon. While this is a really smart move, it also still just stinks of plagiarism, whether or not Brandon did it to show his partner up. What I am most amazed at is that Brandon googled “unknown Bach fugue” and picked a piece that he assumed was unknown. No matter what you type into Google, if it comes up on the first page of results that shit is very known. The Dean has had enough of the Kat and Brandon fighting, and they are both kicked out of band camp.

Lena’s mom and dad are back in town this week. Due to some technical difficulties (aka Stephen Collin) Lena’s dad, Stewart, has had a face transplant since we last saw him at the wedding. Also in town is Lena’s half-brother Nate. Lena  has not talked to her brother in about twenty years, since the day he called her mother the N-word. It is a huge matter of contention between Lena and her mother, Dana. Lena also discovers that Dana never told her father about what Nate had said. Dana wants to let the past stay in the past, and is willing to forget it ever happened so Nate could be back in their lives. Lena is not having it. She cannot understand how her mother can be so blasé when it comes to Nate. Lena refuses to have a relationship with her brother until he apologizes to her mother.

Lena sets up a dinner party at her house, to ensure maximum confrontation time with Nate. She is upset when she learns that Nate is bringing his new girlfriend to dinner, and is even more upset upon learning his  girlfriend is black. As expected, Nate is an ignorant jerk, and Lena ends up storming out of the dinner party. When her mother follows her, Lena finally convinces her Dana to confront Nate for the hurtful comments he made twenty years ago. When she does confront Nate, he denies everything, saying  that it never happened, and starts whining about how his dad always chooses Dana and Lena over him. This actually made me feel sick during. Nate is a grown ass man, and it has been twenty years since the incident. Be an adult and admit you did something wrong instead of whining to your father about him condemning your racist comment. Stewart kicks his son of the Lena’s house, and hopefully that is the last we ever see of Nate.

On some lighter news the episode, I am really warming up to AJ, and actually am rooting for him and Callie to become an item. I am just not sure what the rules are about hooking up with your step-foster brother. I never thought that a characters on a show could have more confusing relationships than The OC, but I think The Foster’s  has them beat.