Hello fellow Challenge Heads, and welcome to the season finale of the DIRTIEST season ever. I know that this review is up super late, so you guys all know who the winner is. JK, we don’t find out who won the season until Tuesday’s reunion. (Hard eye roll coming from behind the computer). If the reasoning behind this decision was to prevent leaks on the winner, I guess I can understand that, but it made for a pretty anticlimactic finale. This was a pretty underwhelming final challenge. There was no suspense, there was no umph, and that was largely due to the constant stopping and starting at each stage.

We left off last week as the three teams were lugging heavy stones down an Argentinian maze. Jordan and Camila were are able to play smarter not harder by finding a shortcut and come in first place for the initial stage with Cara/Derrick seconds behind them and CT/Tori not far behind.

For Stage Two, the players must throw bolas, which is an Incan weapon that was used to hunt Llamas with (poor llamas). The goal is for each pair to throw the bola onto a cactus shaped apparatus some distance away. Each time the pair misses the cactus, they have to take a shot of fermented llama’s milk. I actually had to close my eyes and then walk away because I started gagging watching this.

The players compete in the same pairings as Stage One and since Jordan/Camila came in first they have the power to assign one team a second bola and they give it to Tori/CT. Jordan and Camila crush the challenge yet again. Even though CT/Tori had two bolas, they come in second because Derrick/Cara couldn’t throw those bolas for shit.

On to Stage 2: PUZZLE TIME! It is also time to shuffle up these pairs…. kind of. Jordan and Camila get to choose the female and male they would like to compete with in the next leg of the race. Jordan picks Tori and Camila chooses CT, forcing Derrick and Cara Maria to pair up for the third time in a row. 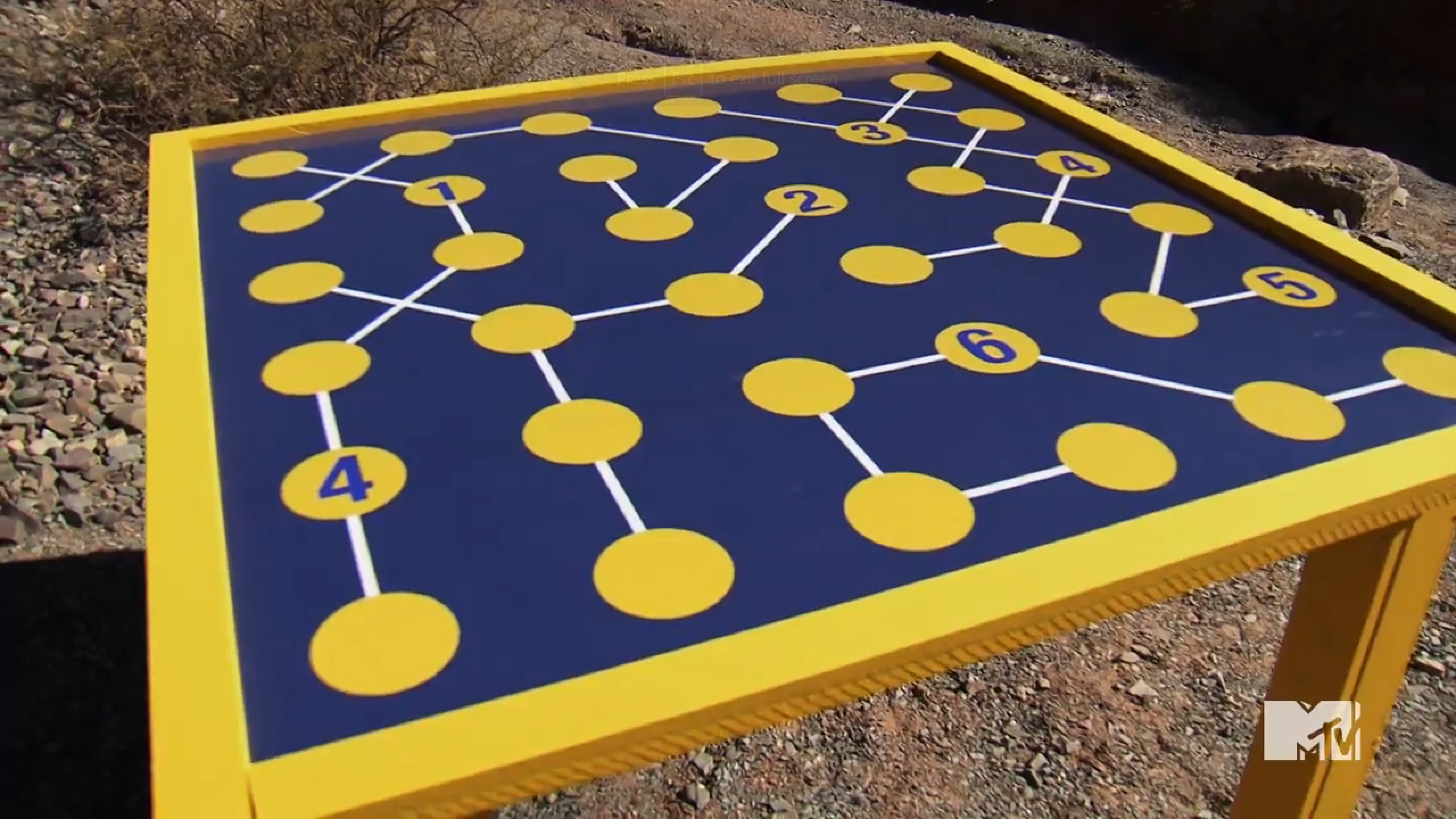 Each team has to run up and down steep hills to pick up their puzzle pieces. I was having sympathy knee pains watching Jordan run down those hills on his jacked up knee. I am also convinced that Jordan may not be human. Derrick/Cara get to the “Sudoku on steroids” puzzle first, but this doesn’t really do them much good. Derrick is bad at puzzles, this is nothing new. I don’t like him any less for it. But it does mean that Cara Maria has to do the puzzle all by her lonesome, which allows the two other teams to finish the puzzle first.

Finally, each player is competing individually. The goal here is to build a totem after completing a bagillion steps.

First, the competitors have to run up and down and through the mountains until they reach a cliff with climbing gear. There are only three climbing setups, so only three players can go at a time, but there is no penalty to being the last three to arrive. Instead, the players’ time is paused until it is their time to climb. This stopping and starting of time is so disruptive to the flow of the episode. Anywho, Derrick, Jordan, and Camila are the first to arrive at the climbing gear so they are the first to climb. And cue Camila’s first freakout/tantrum of the finale. 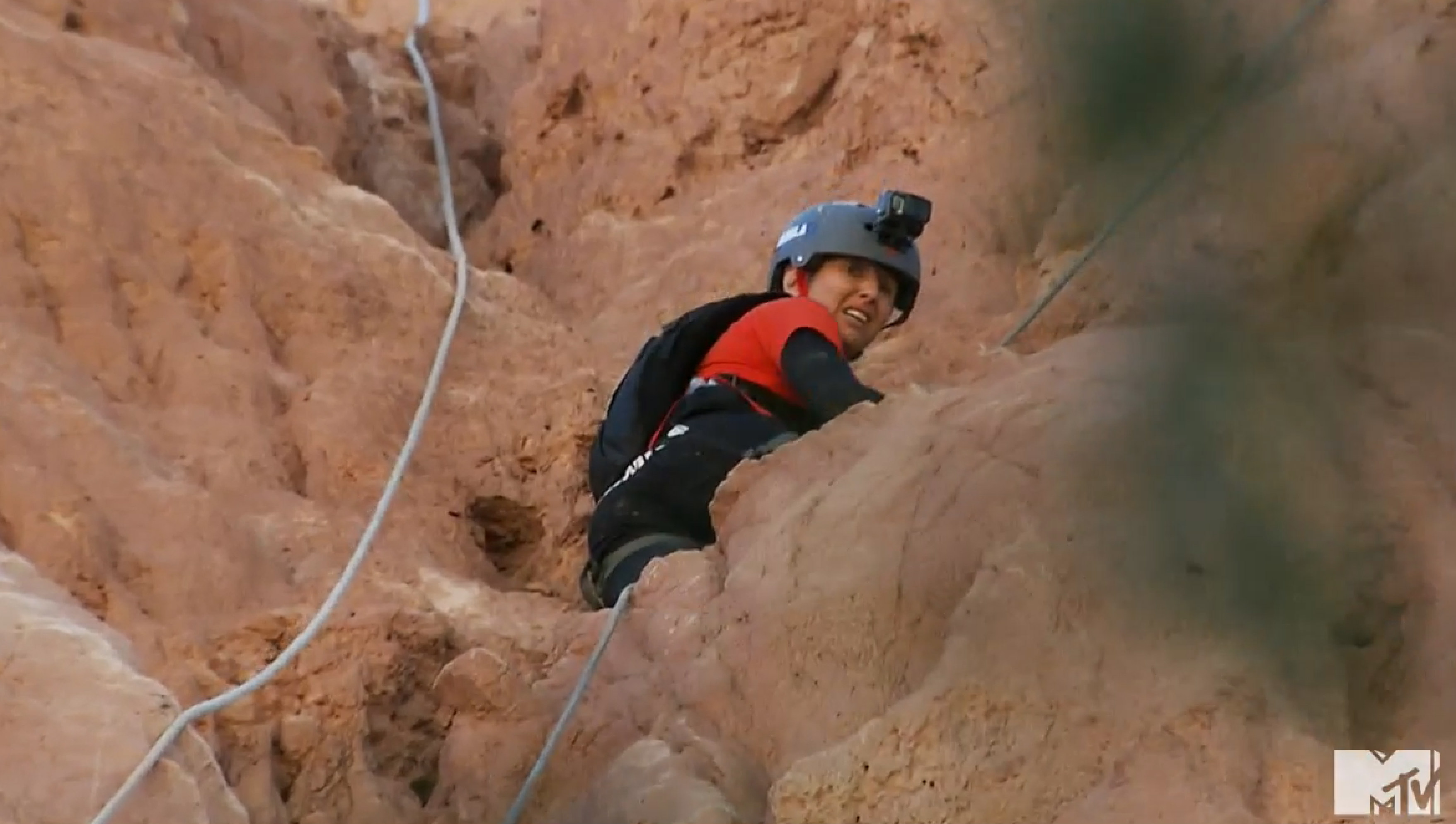 She starts screaming and crying that her rope is “pulling her the fuck down.” Tori just sits back and watches because the more Camila freaks out, the smaller her lead gets.

Tori: “Camila’s having a fit right now, and…. It’s fucking awesome to watch”

The second group of players climb there way to the top without an emotional breakdown, and now it is time for everyone to run across the ridge of the cliff and build the totem, the actual point of this stage.

While running, Jordan notices the large Totem Pole (again the NAME of the stage) and quickly commits it to memory. Apparently, Jordan is the only one to even notice that totem. Good thing Derrick is right behind Jordan and copies his Totem before he knocks it down. And then CT copies it from Derrick, and Cara Maria from CT and so on. The only person who wasn’t smart enough to cheat was Camila and she is forced to run back to the original totem before a second building attempt.

Derrick is My Hero Stage

I forgot to write down the name of this stage, so I just made one up.Since Cara Maria came in first in the Totem Recall, she takes this opportunity to work with CT on the next stage. This leaves Derrick to work with an incredibly grumpy and irritable Camila.

When the players approach this stage there is a huge explosion. An explosion that has nothing to do with the challenge at hand. For this fifth stage, the pairs must run into a smoke-filled tent and decipher a word on the wall (snake). All three teams got the word “Snake” right on their first try, with Jordan/Tori coming in first by 20 or so seconds and CT/Cara and Derrick/Camila only seconds apart.

Derrick, who knows he sucks at puzzles, had one goal for this challenge: stay out of Camila’s way. Camila was not happy with Derrick’s game plan. From the second they write “Snake” on the chalkboard, Camila starts bitching at Derrick. He tries to give her a high five and say “great job” but she isn’t having it. She just keeps saying that she had to do everything herself. Derrick agrees, apologizes, and follows it with “You did it all alone and you crushed it.” Not even playing to Camila’s vanity will work for Derrick in this scenario and eventually, Derrick just gives up.

Derrick: “You did awesome, I’m gonna walk away now” 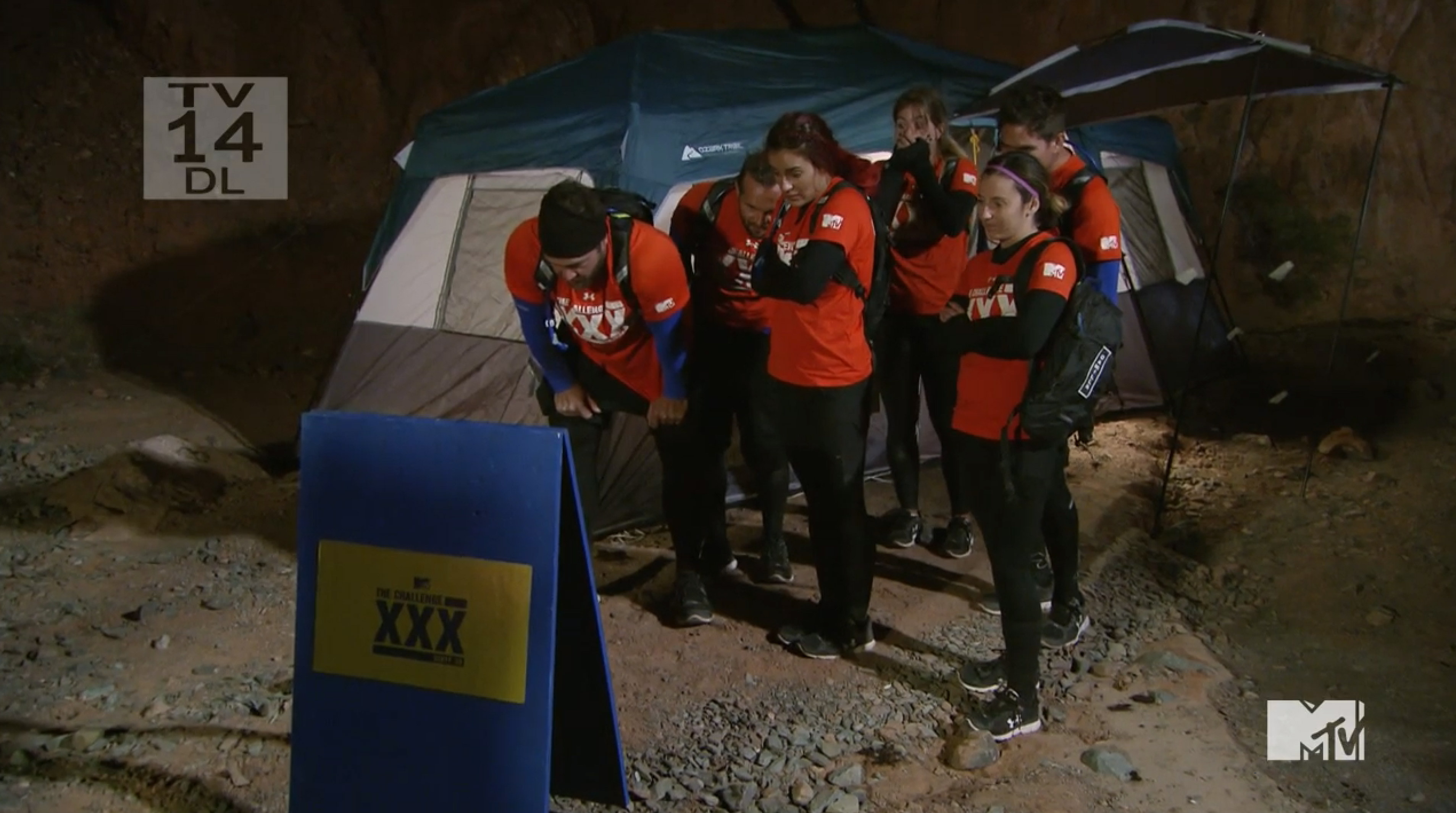 It is time for bed, and there is a nice warm tent with nice warm blankets inside of it. Except there are only 4 sleeping setups meaning that the Stage 5 winners have to pick one girl and guy to sleep outside on the dirt. Jordan’s choice is a toss-up because no one really knows what place Derrick and CT are in, but in the end, he chooses Derrick. Tori’s decision, well it was a no-brainer. She chooses Camila for the same reasons she chose her in the double-cross. Next comes one of my favorite/ most bizarre moments of The Challenge ever. This is Camila’s response to Tori’s decision:

Camila:“You guys might have beds, but you might just have to sleep next to some Camila shit. Oh, I know where I’m pooping tonight”

WHAT?!? That is hilarious, and scary, and gross, and amazing, and insane. I can’t. Who says that? What is going on in this girl’s mind?

For the last leg of the final, the competitors arrive at a salt field 14,000 feet above sea level where they will have to hold onto sled attached to a truck as it drives over the salt field. Once the truck stops they have to run to the finish line. Also, bursts of fire are going to go off randomly as they are sledding on this salt field.

In the end, the inhuman Jordan, with his bum knee sprints to the finish line minutes ahead of the rest of the pack. I think it is safe to say that Jordan is the male winner. Even with the five extra double-cross minutes, he was first in every stage except for the Sudoku puzzle. The girl’s winner is a little harder to predict, but I am pretty sure it is Tori. Camila’s five-minute penalty plus her totem climb freakout really ate into her time.

@theworkprint
Follow
Previous articleTeriah: ‘The Young and The Restless’ Ship You Should Be Watching
Next article‘The Shannara Chronicles’ Recap: Magic is Here to Stay