I can safely say that I had no intention of getting invested in a slow burn female pairing on a soap opera and yet, here I am. Several months ago, I’d heard rumblings that The Young and the Restless was going to be, at long last, doing a queer storyline. Mariah Copeland and Tessa Porter were supposedly going to fall for one another. Never mind that Tessa was dating Mariah’s brother and both women were, up until this point, straight. I didn’t think much of this news and pushed the rumors into the back of my mind, instead focusing on actual wlw (women who love women) stories. Jump ahead to August when I learned that this storyline seemed to actually be taking shape because Mariah and Tessa had kissed! Queue me setting my DVR to record Y&R on a daily basis. 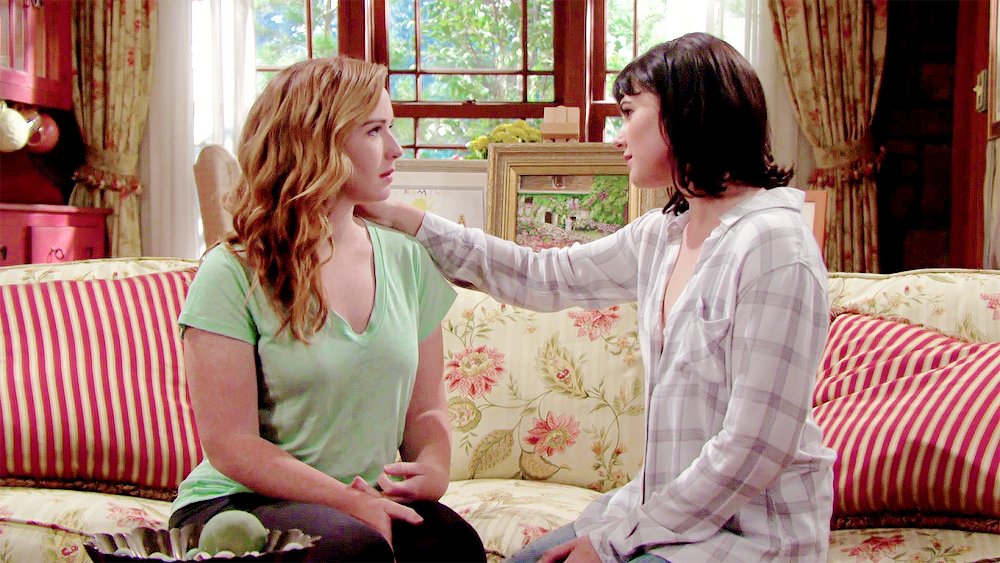 As someone who loved watching Bianca Montgomery go from scared closeted teenager to an out and proud lesbian on All My Children (in spite of some of the less than stellar storylines) I was thrilled to learn that the world of daytime television was adding another same-sex pairing, and so far I have not been disappointed!

Mariah, played by the incredibly talented Camryn Grimes, has been on the show since 2014. Camryn herself has been around much longer having previously played Cassie Newman who was, in true soap fashion, Mariah’s dead twin sister. Mariah was raised in a cult and is the secret twin no one, not even her parents knew about. At one point she even developed a crush on her adoptive father, Nick. Tessa, played by Cait Fairbanks, is new to Y&R as of 2017. She’s a singer-songwriter, in real life and on the show, who is now dating Noah, Mariah’s brother. Soaps are wild.

Now that we’ve had a quick round-up of the ladies of “Teriah” let’s talk about where we are in their story. Mariah is dating Devon, Tessa is dating Noah, and in spite of their boyfriends, things look like they ramping up for our ladies. The longing looks that they’ve been throwing at each other are getting harder to hide and three weeks ago (I think, time is confusing on soaps) Mariah tried to get Tessa to talk about her feelings regarding the kiss they shared. Mariah’s getting good at this lesbian processing thing! Tessa, who looked like she wanted to sprint out of the room at the mere idea of that discussion, used the standard “the timing isn’t right” line in order to put a stop to anything. However, when they hugged after that conversation, she clutched Mariah as though she was a life raft.

Then. Last week. My heart was blown wide open. Sharon, Mariah’s mother, called her daughter out after she overheard Mariah stating she was feeling “physically ill” before leaving the Halloween party. Sharon didn’t realize why her daughter was feeling ill but knew something was up. This confrontation leads to one of the most incredible scenes I’ve seen in a very long time. Mariah eventually unloads her feelings for Tessa onto Sharon, and Camryn’s portrayal is a thing of beauty. The anguish in her eyes, the fear on her face, the utter turmoil she’s feeling. It’s all there. After Mariah’s confession, Sharon tells her daughter that she must go to Tessa and be honest with her. The November 2nd episode ends with Mariah coming clean with Tessa, and Tessa acknowledging that their kiss did, in fact, mean something. But, for now, all Tessa wants is to be is friends.

It’s rare that a storyline rips me open the way this one has, and I can honestly say I wasn’t expecting any of this. Soap operas aren’t where I tend to go for my wlw stories but this one, in spite of its soapiness, has resonated deeply with me. To hear Mariah say “But all day long, I am playing this part. I am so… I am so tired of pretending” is incredibly powerful.

It is something that so many queer people have felt, and we don’t get to hear it said nearly enough. Couple that with Camryn’s delivery and I was a pile of uncontained feelings on my couch. I haven’t cried at a coming out scene that hard in a long time. To see this coming out scene followed up with a discussion between Mariah and Tessa, where you start to see Tessa’s façade crack, is the icing on an already delicious cake.

I have no idea how Teriah’s story will play out. Rumor has it this slow burn will take a year, and I have no idea what they’re counting as the start, but let me tell you I am firmly all in. I know the odds of a happily ever after are slim, but that doesn’t change the fact that this could be one incredible ride.

You can catch The Young and the Restless weekdays on CBS.