For a Judd Apatow comedy movie made about making a movie during the pandemic… the comedy seems in poor taste.

The Bubble is a Netflix original movie directed by Judd Apatow starring Karen Gillan and an ensemble of A-list actors, such as Keegan-Michael Key, Leslie Mann, David Duchovny, Pedro Pascal, and Samson Kayo. It is a parody of Covid-19 lockdown conditions, where a group of actors are forced to live in an isolated pandemic bubble together and are driven to the edge due to isolation, human neediness, and the desire to escape their oppressive Hollywood film shoot. That despite being paid millions, the actors are meant to be the victims due to the unruly demands of a Hollywood studio that seeks to profit off yet another unwarranted franchise sequel.

In The Bubble, Karen Gillian plays Carol Cobb, an actress returning to the Cliff Beasts franchise that made her career. This is after doing a distasteful move called Jerusalem Rising, in which, she made a career-ending portrayal of a character so far removed from her own nationality that it offended both Palestinians and Jews.

She returns back to the Cliff Beats franchise in an effort to revive the films that made her career, and at the same time, reunite with her more than upset at her cast members, who’d never really forgiven her for leaving. The group is forced to live under bubble-like lockdown conditions to keep safety covid protocols and the movie is a parody documentary told much in the style of Tropic Thunder. 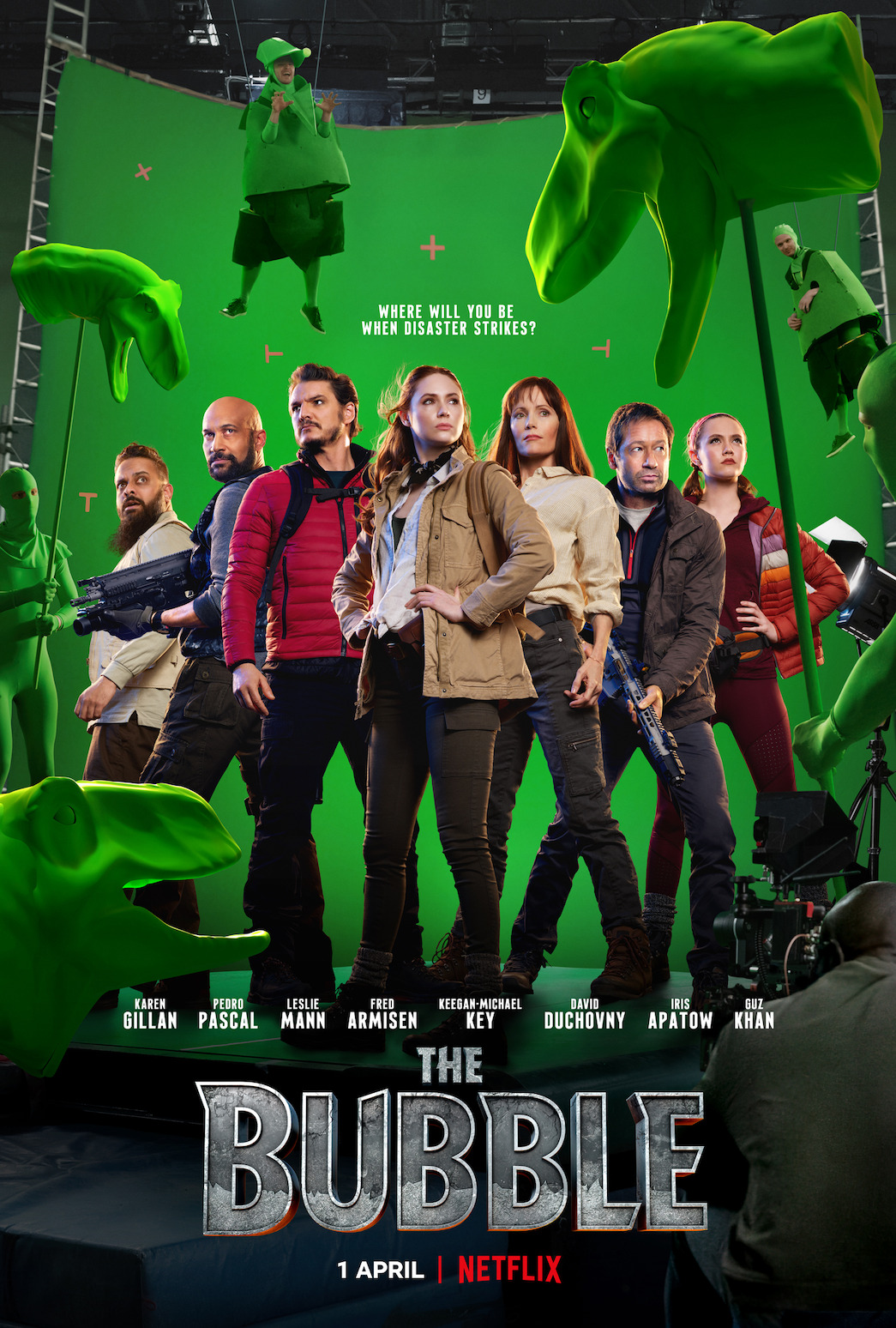 What works for ‘The Bubble’ is that it delivers on the promise of its premise in that it makes a lot of uncomfortable commentary about lockdown conditions, the need for human connection, sex, drugs, and weed. Because… why not? It’s the entertainment industry.

Perhaps more importantly, The Bubble villanizes a recurring Hollywood franchises’ studio sequel model–a parody of what’s likely the Jurassic Park franchise–poking fun at a tone-deaf of the pandemically privileged Hollywood, without ever looking at itself: as being just as guilty of this entitlement.

At best, the Meta-comedy works as a critical self-take on celebrity self-indulgence inflated by its own grandiose set of importance. For a movie that’s meant to be a parody documentary about a throwaway action film in the story; it’s ironic that this is also, as a Netflix film, very much a throwaway comedy. And while it’s filled with silly gags, obscene moments of shock, and  stellar performances of its cast, there’s just one glaring issue that bombs the film:

It belittles the dangers of Covid-19. Nobody seems to die from the disease. The biggest antagonist of the movie seems to be the bubble itself.

Where ‘The Bubble’ then fails as a film then, is that honestly, nobody wanted a pandemic-themed parody as a form of entertainment right now. Not while we are barely past the latest wave back in January, with historic Omicron waves just behind us and, as many such as myself fear: the possibility of another wave right in front of us soon to come thanks to Omicron stealth variant cases on the rise worldwide.

Why anyone would think this movie would be a good idea is beyond me as 2021 had a larger death rate in the Covid-19 era than 2020.

Now, this is not to say that you couldn’t poke fun at the pandemic. I think Mythic Quest did a fantastic job of it. I think, with some distance and some actual signs of hope, then yes there can be a pandemic-themed movie or event again. But now is not that time. Not with the country divided with what the past few years have even meant, and especially, not through the voices of some privileged Hollywood actors who’d never really lost much due to the pandemic in the first place.

That said, let’s focus on the positives.

The actors in this movie are stellar. Everyone does their part well, including Iris Apatow, who plays a social media influencer-driven celebrity that does everything she can to upkeep her public image, or else be shunned by her mother/agent. Part of me wants to argue that the entire reason this movie was made was to help launch Iris’ career, but she does a great job in her role as a Gen-Z’er where I can’t really say this was outright nepotism. There are enough laughs and moments of awkwardness where Iris Apatow delivers outside of her family’s reputation. the Apatow family is pretty powerful in Hollywood.

I also think Karen Gillian plays a decent every woman you’re supposed to understand, but not sympathize with, in terms of beginning to age Hollywood actress doing all she can in the prime of her career before the industry, unceremoniously, ages her out.

Mann and Duchovny have a fun Hollywood couple relationship with multiple levels of complicated, Keegan Michael-Key is a fun fake-positive health guru, and easily the best performer: Pedro Pascal, fills in what likely was going to be the James Franco role in that he’s a hyper attractive sex addict looking for vices of indulgence, but is only able to find: romantic love in Annika (Maria Bakalova, who is stellar again, just as she was in Borat 2).

There are moments of funny in the movie. I think when the actors are given room to play into their roles, meaning their arguing, improving lines, and working together: the film works. Surprisingly really liked Duchovney and Leslie Mann. Absolutely loved Karen Gillian as the lead. What doesn’t work, however, is the actor’s progress with their own individual story beats, as the jokes don’t hit well, and in so many ways, these ‘character arcs’ are just a means of forcing the plot forward and raising ‘stakes’ that feel entirely forced?

This movie is fun seeing the actors play off each other but horrible when it comes to deriving any sense of meaning from their struggles.

Again, the problem is that they antagonize quarantine without ever showcasing the cost of breaking it. And, if we’re going to rip the band-aid off entirely if you’re doing a covid-19 movie? You probably should have killed a few people from Covid-19 in the story? Or at least, talked about the riots or race issues or government overthrow. Really, just highlight, any of the innumerable amounts of bad things that have happened in two years that revolved around the pandemic and could’ve easily been poked fun at.

Instead, we’re supposed to empathize with overpaid celebrities about getting to work in a dream industry? All while watching them live in a luxury hotel, do drugs, bang each other, get served whatever they want, and crack jokes?

But you know… we’ll throw a TikTok reference so you know it’s a movie for the youth.

The Bubble is available on Netflix

Previous article
5 Adorable Critter Comics Exclusive To Marvel Unlimited
Next article
After The Slap: Will Smith Left, But Nobody Cares About People with Alopecia