The Art of Self-Defense Review: Buckle Your Belts for this Ridiculous Ride

The Art of Self-Defense is a new, dark comedy that attempts to digest the awkward journey of one’s identity through the ancient practice of Karate.

Jesus, what did I just watch?

The Art of Self-Defense was one of the most awkward, darkest, hysterical, and amazing films I’ve seen in a while.

I came into this movie knowing nothing except that it was a dark comedy with Jesse Eisenberg as the lead. What I came out of this movie knowing was that I had witnessed a film crafted to examine the perception of “what a man is in society.”

Casey Davies, a socially inept mild mannered accountant, is attacked during the middle of the night by a random motorcycle gang, hospitalizing him. Afraid to walk the streets at night, he joins a local dojo to learn the ancient ways of Karate so he can defend himself. In the process, he steps into a dangerous world led by a strange Sensei, played by Alessandro Nivola, and must figure out if this is where he belongs and who he is.

In what critics and viewers can claim is a typically Eisenberg role, Jesse uses this opportunity to flex his acting chops and put in a strong performance as we follow his character’s journey as he is confronted with hyper-masculinity. This has been a personal favorite of mine when it comes to Eisenberg’s career.

The film is well-paced and does a fantastic job of allowing you to feel out the situation. When Casey’s awkward personality interacts with confident individuals not afraid to express themselves, we are placed in those moments, letting it sink in. The narrative dimension of Karate being the driving force in this movie adds to the overall ridiculousness  The rest of the cast also does a great job providing stellar performances, with the pack being led by Nivola and  Imogen Poots as Ana, an experienced Karate student/teacher. Nivola is arguably the most entertaining performer on the screen, with his dedication to the art of Karate being showcased to use as Gospel. 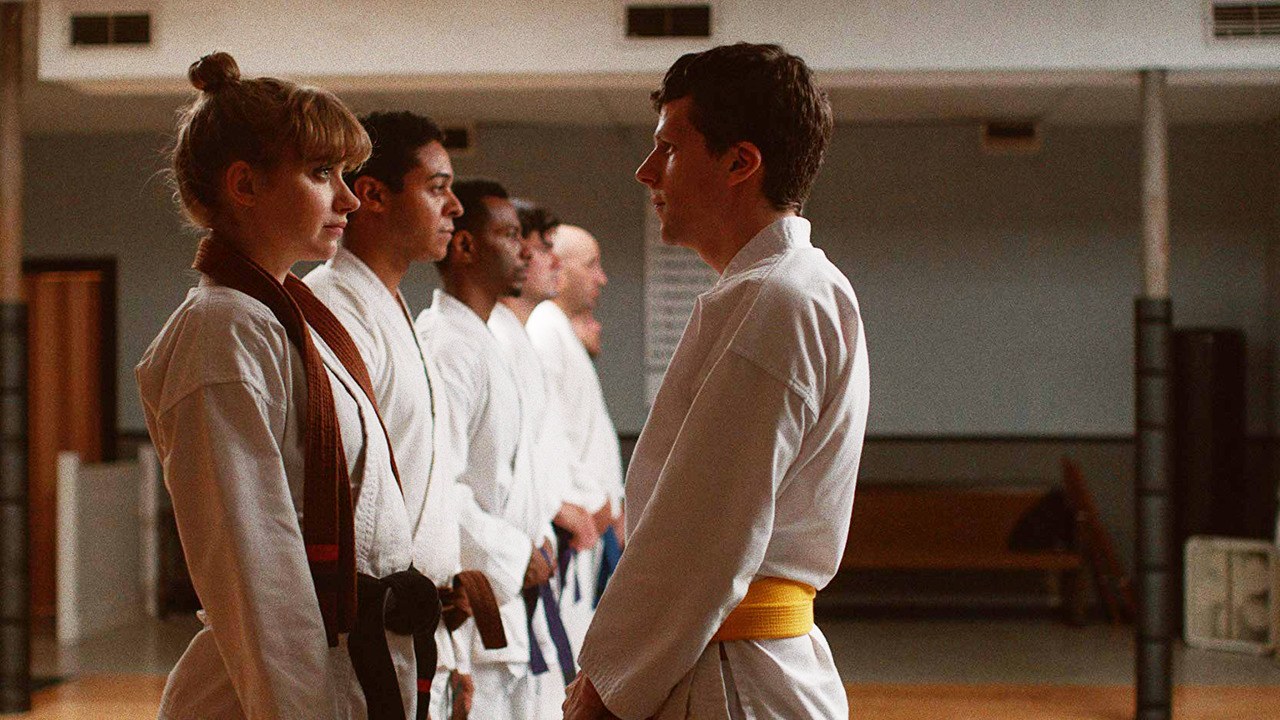 Riley Stearns, the writer and director, excels in balancing the tone of this film (Office Space meets Fight Club) with its critique of toxic masculinity. The movie seems simplistic in its presentation, but the subtle choices in his characters and the world they live in helps set the mood for the audience. The intentional choices of color plays an essential part in the narrative while reflecting the characters that don them. The stylistic choices extend to the distinct camera choices, aided by cinematographer Michael Ragen, who alternated between static compositions with slow-motion action sequences that heighten the humor.

This movie was a blast, and it was refreshing sitting in the theater laughing at such a strange movie while constantly acknowledging how ridiculous The Art of Self-Defense is.

Since the narrative is relatively focused on a handful of characters, each of the main players gets a share of development. The vibe of the film almost feels like a period piece with some of the technology used in the film. It feels like the story is stuck in time, which acts as another critique on the antiquated idea of masculinity.

A warning: this film gets very violent and, at some points, graphic. It also doubles down on awkward comedy so those that may be uncomfortable by this should be weary.

Final thought – If you can appreciate a movie that is very dark, uncomfortable at times, and laugh at the ridiculousness of it all, go check out this movie and support it in theaters, as you should with smaller release, independent movies.

P.S. Once you see the movie, go and enjoy their interactive website. Glorious!