I can’t remember the last time a television show kept me on the edge of my seat like The Americans. It’s so subtle, too, but the writers and actors keep winding the tension tighter and tighter until I’m honestly not sure where it started and I’m more than a little afraid of where it’s going to end.

This week, the main thing that’s forcing my hands into fists and my eyes to beg me to look away from the screen is the seemingly inevitable moment when Philip (Matthew Rhys)  is going to have to sleep with a fifteen-year-old girl. Kimmy (yes, really, because knowing she’s fifteen isn’t enough – her name has to be Kimmy and she has to look like she’s twelve and act like a clueless flop), still has no clue that her absentee father is in the CIA and even less of a clue that her new, older boyfriend James is a KGB agent looking to slip a microphone into her father’s briefcase. She’s got major daddy issues and apparently the only thing that’s going to fix them is in Philip’s pants.

Even though the Jennings’ spend a good portion of their time sleeping with other people in service to Mother Russia, Elizabeth (Keri Russell) doesn’t seem any more keen on Philip defiling a girl their daughter’s age than he does.

Their daughter, of course, remains a major point of contention in the household. Paige (Holly Taylor) goes through with her baptism and seems at peace with her choice. Her whole character really emerges with poise and confidence as the seasons of the show wear on and whether or not she decides to follow in her parents spy-sized footsteps, it’s becoming clearer that no one – not her mother or her father – has the influence over her that they would like to think.

In a sort of random, I’m-not-sure-where-they’re-going-with-this scene, we meet Stan’s new girlfriend from the support group thing at dinner, then later get to watch them consummate their fledgling relationship. At the end of the episode, Stan (Noah Emmerich) learns that several FBI agents, including a good friend, have died in the line of duty, His ex-wife and estranged son comfort him over the loss while he uses the moment to try to get her to go out of town with him to the memorial services. Could this be the beginning of a reconciliation? Or just more disappointment for Stan on that front? I’m guessing the latter. Maybe I’m just hoping the latter because that poor woman is just so clearly better off without him. 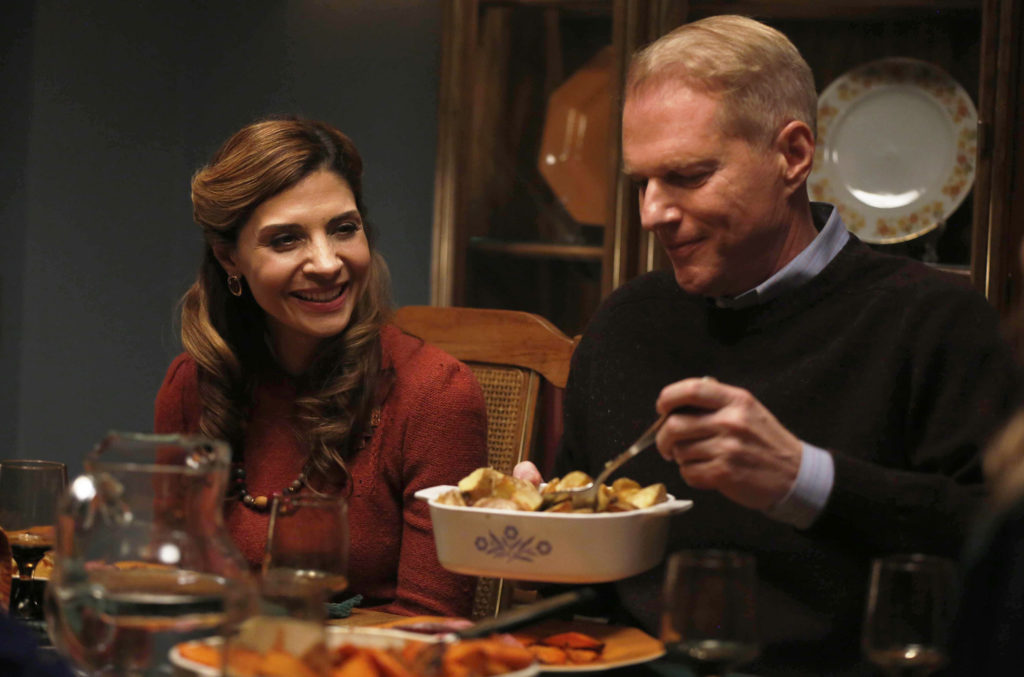 But enough of Stan.

Philip goes to see Gabriel and learns that, even though he got out of sleeping with Kimmy by proclaiming a new and profound love for Jesus Christ, it’s not going to last. They need to be able to get into the CIA agent’s house once a week, which means his relationship with Kimmy needs to be serious and rock solid (pun intended). In addition, he tells Philip that Irina has been found, captured, and extradited and that his son – or the boy she claims is his son – has enlisted in active military duty. Philip asks if Gabriel has told Elizabeth about the illegitimate child and he replies no, but we all know it’s only a matter of the most advantageous moment for him.

Philip and Elizabeth have a sweet moment of camaraderie – smoking a joint and laughing about believing in Jesus – that have been too few and far between this season. I don’t know if I am alone in rooting for them as a couple but my heart just wants them both to have a safe place to come home to.

We can assume all of that is going to blow up now, since after Gabriel points out to Elizabeth that nothing has been initiated as far as Paige, she takes her daughter out for a serious talk. Elizabeth tells her about her younger days, about fighting for things that matter, how sometimes doing the right thing isn’t as easy as signing petitions and picketing with signs, and begs Paige to believe that the two of them are more alike than different, The groundwork is being laid, the charges set, and this storyline is sure to explode sooner than later.

Elizabeth recruiting Paige. Paige finding out who her parents really are and what they do. Philip eventually having to sleep with Kimmy. Philip and Martha and the whole baby thing. Elizabeth and her AA lady friend, the new college boy they’re following. Stan’s office still looking of the Russian spy couple. There are so many irons in the fire that the chances of one or more of them burning our couple are slim to none and I’m biting all of my fingernails off in fear and anticipation.

Oh! I almost forgot about Nina (Annet Mahendru), which is silly because I adore adore adore this storyline they’ve got going on with her. She began on this show as a weak woman, at the mercy of the many men in her life, but slowly but surely we’re seeing her turn into a fierce spy in her own right – a woman who will take care of her own interests first and maybe kick a few asses in the process. This week, she finished her job with Evi, getting the information the KGB wanted, and coldly ignoring the girl’s screams when she realized she’d been betrayed.

I don’t know what kind of person it makes me, but I loved it.

Previous article
HBO May Be Coming to Apple TV In April
Next article
‘Man Seeking Woman’ Review: Adopt-a-Bro or We’ll Euthanize Them