Iron from Ice from Heartache

Note: this article will discuss spoilers through season four of HBO’s Game of Thrones. However, I will not spoil any details surrounding the game’s plot. I’m nice like that.

“Patience” is a word Game of Thrones fans know all too well. A season on HBO comes and goes in the blink of an eye and we, the sweet summer children, are forced to sit through yet another winter of waiting. Book readers know the agony of waiting better than anyone and the fact that we STILL don’t know anything about the Winds of Winter release date makes me want to put nipples on a breastplate and then cut them off with a hot poker.

Thankfully, the blood of our blood, Telltale has helped us satisfy that Westeros itch with a new installment set in our favorite world of murder, betrayal, and ripped smallclothes. Like all of Telltale’s other games, Game of Thrones is to be released over the course of six episodes, each coming out once a month or so. Which feels a bit like Bolton tease, doesn’t it? They fill the void and then take it away. But alas, it is better than nothing. 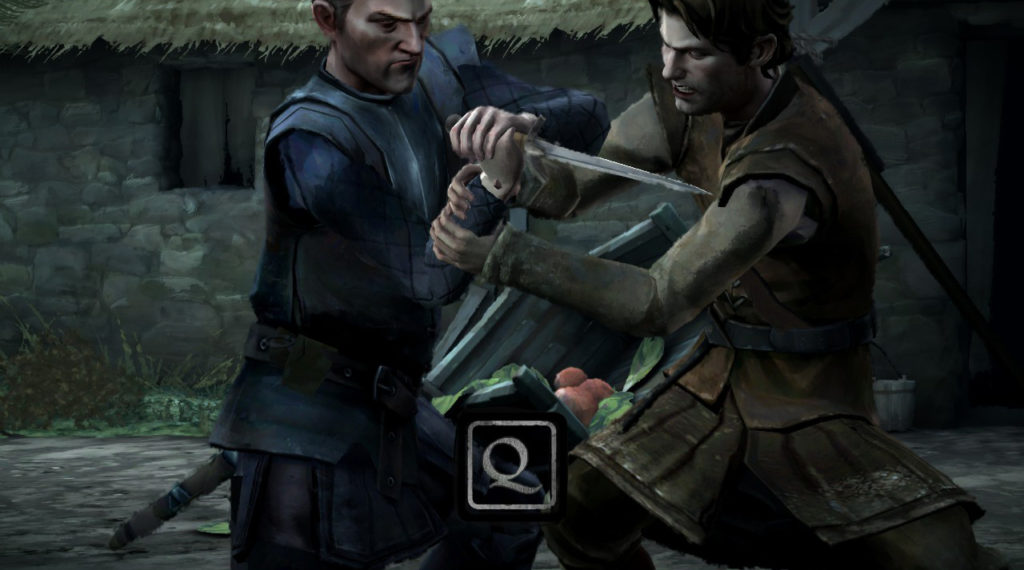 Each episode consists of around two hours of gameplay, or rather, point-and-click choose-your-own-adventure play, interspersed with a few quick time events to keep your fingers warm. Telltale games don’t focus on innovative combat or stunning graphics (not that they’re lacking in the latter). Instead, the focus is on the writing and the choices you, as the main character, make in Westeros.

The first episode, Iron from Ice, follows three main characters who are all connected to the noble House Forrester, loyal bannermen of the Starks (RIP): Gared, a squire for the Lord Forrester; Ethan Forrester, a young lad who is thrust into the role of Lord; and Mira Forrester, Ethan’s elder sister who is in King’s Landing as a handmaiden to Lady Margaery Tyrell.

If there’s one thing I’ve learned from playing this game it’s that I am unfit to rule in any capacity. I debated every dialogue choice, knowing all too well that I needed to play the “game to win or die,” but I failed at every turn, and I don’t think I’ll be allowed to skip a wedding any time soon. I’m the Oakland Raiders of Westeros. But that’s the beauty of a Telltale game. Every choice feels integral to the story. No matter that the character died before my eyes, he said he’d REMEMBER that, and dammit, if he comes back as an Other, I need him to know that I am loyal and I carried out my word.

Telltale did their homework with the plot. Nearly everything felt canon as the story followed the timeline of events immediately after the Red Wedding. Even the lesser known and new characters were developed right from the beginning and fit perfectly into an already established world. Time is of the essence in Game of Thrones, so we as players need to be able to get an understanding of those around us quickly and thankfully, Telltale isn’t lacking for interesting, devious, and flawed characters. Heck, a few of our favorites from the show even make appearances, voiced by their respective actors: Cersei Lannister (Lena Headey), Tyrion Lannister (Peter Dinklage), Margaery Tyrell (Natalie Dormer), and Ramsay Snow (Iwan Rheon). Being the Cersei fangirl that I am, I immediately recognized Lena Headey’s voice, but the squeeing happiness only lasted a few seconds because as a character, Cersei is TERRIFYING and I definitely did not want to anger my BFF. Girl can be crazy. Surprisingly, Telltale even managed to match the master of brutal murders, George R. R. Martin, with a few surprising deaths of its own.

However, I did have a few issues with the game. For starters, exploration and item snooping wasn’t as easy to navigate as The Walking Dead or The Wolf Among Us series. It’s a little thing, one I mostly overlooked, if only because I put the entire blame on the font choice. Similarly, the timer for dialogue choices seemed insanely short, and maybe it was the small font, or likely my overly panicked state coupled with a need to GET EVERYTHING RIGHT BECAUSE LIVES DEPEND ON IT, but there were several instances where I didn’t get a chance to answer. And in a game where you’re told repeatedly that choices dictate the coming events. it’s frustrating to not be able to answer the way you want to.

Yet, the most frustrating aspect of the game goes completely against its main selling point. As I’ve mentioned, Telltale games pride themselves on offering the gamer meaningful choices, but in spite of this,  at the end of the episode, I felt as though my choices didn’t matter. No matter what I did or said, I could not have changed the overall story and in the end, it was kind of a letdown to the spectacular twist. (I really was shocked.) I appreciated the journey Telltale provided and I won’t knock them for the fantastic narrative they are building, but in the future I do hope to see more consequences for my (terrible and indecisive) choices.

Overall, Iron from Ice is a solid introduction to what I hope to be an entertaining six-part series. Though the narrative sagged slightly in the middle, I found it to be compelling and exactly what a Game of Thrones fan suffering from withdrawal needs.

Besides, how could anyone dislike a game that hates the Boltons as much as the rest of us? 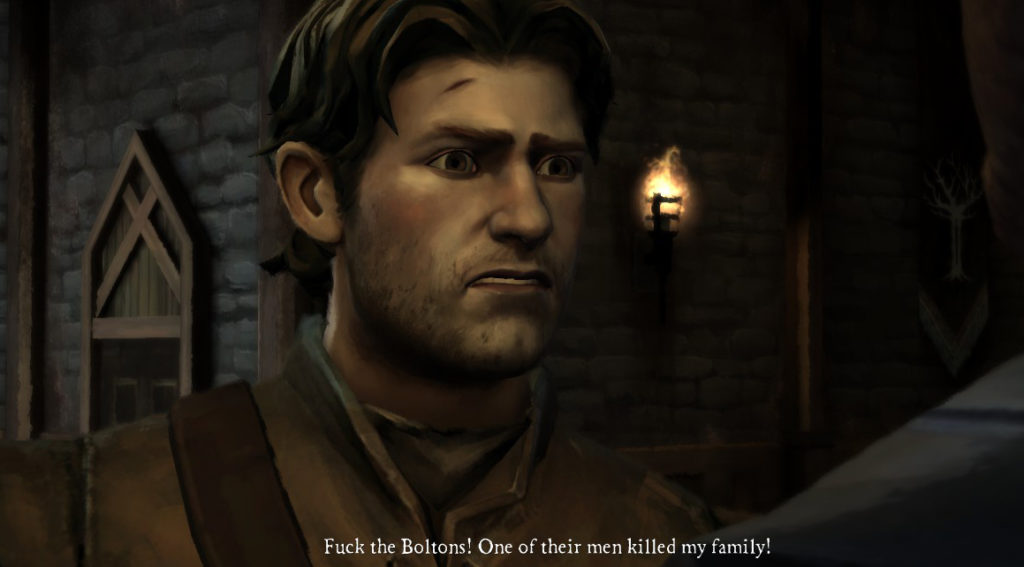 Previous article
‘AGENTS OF SHIELD’ Recap: “What They Become”
Next article
Brring brring — Amy and Tina Just Called With the Golden Globe Nominations