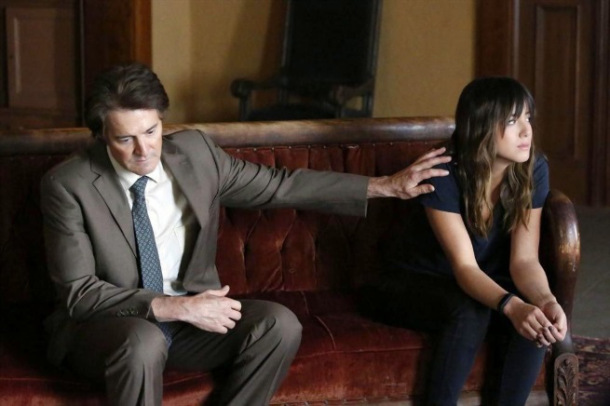 ‘AGENTS OF SHIELD’ Recap: “What They Become”

So…how’s about that mid-season finale, huh?

When we left off with last week’s episode, it was clear that Agents of S.H.I.E.L.D. was building towards something big. How big? Let’s just say that “What They Become,” an explosive bombshell filled with non-stop action and answers to some of the season’s biggest mysteries, was the cap to a pretty awesome first half of the season. More importantly, it set the stage for a back half of season two that promises to up the ante even more than we’ve come to expect.

The top half of the hour focused on the immediate fall-out of the events of last week: namely, Simmons and Bobbi feel guilty that they couldn’t save Mack (though for different reasons, respectively), while May feels guilty about not taking better care of Skye. Simmons does deduce that there’s a chance Mack didn’t die after all in the cave – rather, whatever he was infected with transformed him, and is now controlling him. Fitz points out that the city’s defense system could act like the Obelisk, and despite the fact that the tension between the two is still there it almost feels like we have our Science Bros back.

Elsewhere, Ward brings Skye to see her father, The Doctor – aka Cal, one of the big name reveals of the night. Nothing S.H.I.E.L.D. gives us is ever random, and neither is this: Cal in the comics is known as Calvin Zabo, a supervillian and mad scientist with superpowers thanks to a serum that he passes onto his daughter. He’s also known as his alter-ego: Hyde. (Now think about how The Doctor has been introduced…works pretty well, right?) The whole meeting is extremely awkward, with Cal trying to be the model parent who just wants to make things right, but Skye is having none of it. Case in point: “Are you serious? I was kidnapped off a plane at gunpoint, and that’s all you have to say?” I don’t blame you, Skye. I’d be the same.

We do find out more about Cal though, in an expository info dump that thanks to a tense standoff and Kyle MacLachlan’s acting, doesn’t feel nearly as tedious as it could be. He tells her about his past, that she’s “special,” he tells her where she was born and how he worked in a clinic, where he was an actual doctor before he became…well…the person that we’ve seen in the last few episodes. “This is your destiny,” he tells Skye, who at this point has pretty much had it, because according to her, he’s nothing more than a monster and a murderer. Cal at least corroborates that, before admitting that the only reason he became the way he did was because he lost her. He never wanted to work with Whitehall, especially because he’s the reason her mom was murdered – all he wanted an “in” so he could find his daughter, and then murder the man who had destroyed his family. The whole thing is a nice sentiment, and I believe most of it, but it’s certainly not going turn things around fast enough for Skye to start hugging him in forgiveness. (Nope, not even when Cal starts humming the lullaby that he used to sing to her when she was a baby.)

Bobbi has taken Lance with her to San Juan to look for Diego. They find him talking to Hydra and in a spur of the moment improvisation, Bobbi pulls Lance in for a distraction kiss Natasha Romanov style. (Bets on if Natasha learned that from Bobbi, or vice versa?) The move works – they’re inconspicuous enough that Diego manages to slip Bobbi a piece of paper as he walks by, which details the address of a temple that sits right on top of the city. I really love everything the show has done with Bobbi and Lance this season – from setting up their relationship to navigating their history (making it just enticing enough to hook us in), to showing even in a short time how they’ve grown by reconnecting with each other. I’d venture to say Lance Hunter and Bobbi Morse are my MVP Couple Of The Year, and we still have half a season of the show left. But truthfully, Nick Blood has really come into his own and Adrianne Palicki is a gift, and I can’t wait to see where we go with both of them when the show returns.

As the team re-groups, Coulson orders the Koenig brothers to stay behind, while Tripp, Simmons and Fitz attempt to figure out some old Howling Commando gear – manual detonators that Tripp has come across that should still work in the city. The three get ready to go after Mack in the cave where he disappeared, while Coulson and May prepare to infiltrate the Hydra safehouse where Whitehall is holding Skye.

We get to see Skye embrace part of her “destiny” when Whitehall gives her the Obelisk to hold, which she unsurprisingly touches with no problem, even using it to kill a guard. He also finally reams out Ward for his actions on The Bus, while Ward reveals the fact that Skye’s just insurance. Raina calls him out on his lie, though, insisting that he’s taken Skye because he still cares about her.

As a thoroughly brainwashed Agent 33 holds Ward hostage, he tries to relate to her with tales of his own brainwashing (aka Garrett.) Ah, to be bonded by terrible experiences. Whitehall is focused on Skye and Cal, goading and torturing them until BAMF!Coulson breaks in to save them. And when I say BAMF!Coulson, I mean BAMF!Coulson.

Sure, he’s got May with him. And I’ll spare you the repetitive gushing that I’ve done about Agents of S.H.I.E.L.D. and the fight scenes/stunt sequences this season by saying that Clark Gregg has had a lot of moments to shine, but this was one of the best. I mean, he even attempted the signature Black Widow thigh chokehold! No one can be Natasha Romanov, but you gotta give the guy credit for trying.

Unfortunately, the cause of BAMF!Coulson comes from the fact that he interrupted Cal’s golden moment of killing Whitehall (in a rather boring way, all things considered.) Cal’s pissed, and Cal’s going to beat Coulson up because of it, but Skye gets free and manages to get her two fathers to stop fighting by calling Cal “dad,” which seems to snap him out of his anger. When Cal responded by saying, “he took something from me,” I immediately thought he was referring to Whitehall’s murder of Skye’s mother all those years ago. But the more I think about it, it seems like a line that encompasses a bigger meaning – he’s talking about his past, but he’s also referencing his current anger towards Coulson, towards the fact that Coulson’s role as Skye’s “surrogate father” meant that she continued to get taken away from him. You gotta admit that you felt a little bad for the guy.

Ward, who escaped his capture but was shot by Skye (and then saved by his bulletproof vest) appeals to a distraught Agent 33 for help, while Cal calms down enough to agree to leave without harming anyone. He hauntingly mentions he’ll be waiting for her “after she changes.” Bzuh? “I will always love you, Daisy,” he tells her next, and there it is: Skye’s last name. Skye’s identity. Skye is really Daisy Johnson.

Just who is Daisy Johnson? She’s a Level 10 agent (notably, the only agent to have Level 10 access aside from Nick Fury and Natasha Romanov.) She’s theoretically, according to today’s comics, a director of S.H.I.E.L.D., appointed as such by none other than Captain America. She has the nickname “Quake,” due to acquiring earthquake-causing powers at a young age. She’s technically not an Inhuman – her powers are gained through her father’s genetics (remember that Cal passed on a mutation to his daughter through the experimental serum.) But it seems as though S.H.I.E.L.D. is going to go there anyway, if no other reason than the fact that “mutants” are pretty much banned within the MCU, and they’re going to need some way to explain how she got her powers. It’s pretty clear that Daisy’s here to stay, though it’s not quitedetermined how she’ll fit into the larger scope of the Marvel Universe yet. (Does this mean we get Chloe Bennet in future films? It’s all connected, and given that we have Civil War and a third Avengers on the way, well, let’s just say I wouldn’t be surprised if there’s some early groundwork being laid.

After a brief but sweet Coulson/Skye moment, she runs off to the Temple to get the Obelisk (in her defense, it was her upset over Coulson’s state that prompted her to be reckless.) There’s just one problem: she can’t find it, because Raina has already stolen it. While Raina finds the Temple (with a nice conveniently placed pedestal in the center), Tripp returns underground to save his friends, even though he doesn’t have his protective suit anymore. While he starts removing the detonators, Skye finds the Temple, and also Raina. Just as Tripp removes the last detonator, the Temple begins to more or less “react,” and Tripp finds himself trapped inside the room with the two ladies. The Obelisk opens and something crystal-like emerges, causing Raina and Skye to become frozen in the way we’ve seen when other people have been affected by the Obelisk. Interestingly, Tripp is seemingly unaffected – that is, until he destroys the crystal and ends up taking a shard to his stomach. Soon he’s the one petrified, while Skye returns to normal in a pretty dramatic fashion that signifies she has become “her destiny.” Tripp, on the other hand….well, remember what Raina said last week about only people who are worthy entering the Temple? Yeah. He’s not so lucky.

I’ll admit, it hurts. Tripp was someone that came into the show when it was still in the early stages of trying to find itself, when S.H.I.E.L.D. was very much fused together by certain relationships and characters. He was, in some ways, the individual that helped break the show out of its mold by showing us there could be more to this team. He was a welcome breath of fresh air, a dynamic addition, and he provided a lot of growth for characters — namely Simmons and Skye. (And come on – we never got any more information on his Howling Commando background? Agent Carter, I demand some history!) Yes, I agree that he was underused, but he made the most of what he had to work with and I really was looking forward to seeing him grow within the team. I’m sad we won’t get a chance to. Mark it down…like I said, this one hurts.

(The only redeeming factor about this whole thing is that we get a nice FitzSimmons moment as the two embrace in the aftermath of the whole experience. It’s brief, but they’re healing, and it’s the first step to getting back to where they belong.)

Because this is Agents of S.H.I.E.L.D., the end of an episode never really means the end of an episode – especially when it’s a big episode. And so our tag is a man finding another Obleisk in his study, a man with no eyes, who makes a phone call and asks if they’ve seen this “something new.” So who is this “Faceless Man?” Your guess is as good as mine, but The Reader (another Inhuman) seems like the most logical place to start.

And with that, we’re ushered into two long, painstaking months of theorizing, questioning and waiting. Ah, Marvel. You’re too good to us.