It’s been over two years since we last saw Clementine in Telltale’s The Walking Dead. The captivating story of the young survivor in the zombie apocalypse served as a launchpad for countless franchises for Telltale, and after a long overdue hiatus, the series has returned with its third season, The Walking Dead: A New Frontier.

Telltale has done a fantastic job allowing players to craft their iterations of their story in its take on The Walking Dead universe. Even if you are not a fan of the show or comic book, you can find your own little niche here in your own little world. With the launch of season three today, fans are in for a treat.

Unlike most action-driven games in the current day, The Walking Dead continues its point-and-click, choose-your-own-adventure play, interspersed with a few quick time events to keep your fingers warm. Telltale games don’t focus on innovative combat or stunning graphics (not that they’re lacking in the latter). Instead, the focus is on the writing and the choices you, as the main character, make in this world that is The Walking Dead. 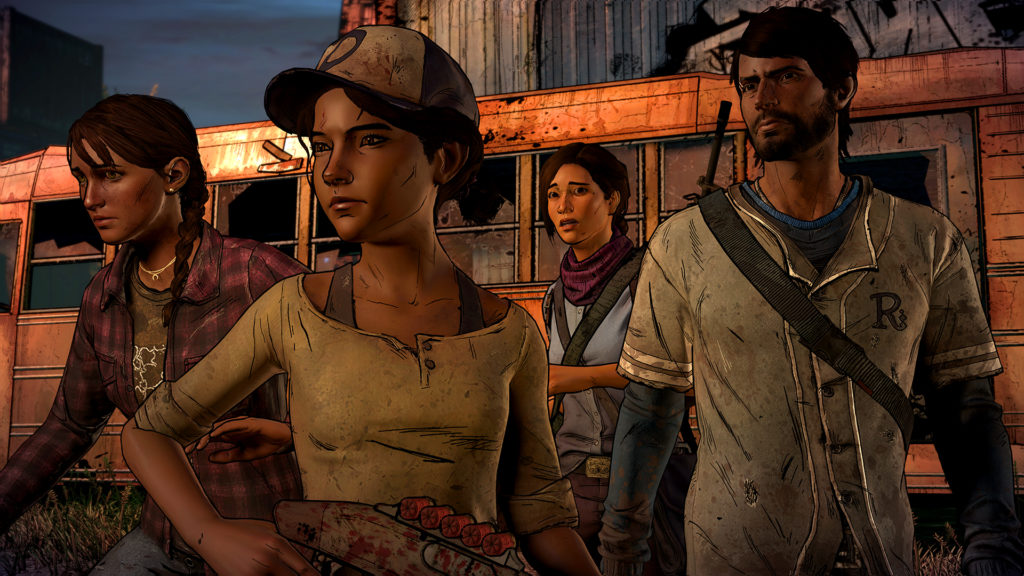 The graphics have not changed much from the first two seasons but it feels more refined. Fans who have played the first two seasons will easily fall back into the groove with gameplay staying roughly the same. A New Frontier itself is smooth and I ran into no bugs occurred during my playthrough of either episode. What has changed, though, is the player’s point of view. Instead of seeing the world via the eyes of Clementine, players now take control of newcomer Javier Garcia as his post-apocalyptic story propels him into Clementine’s life.

The story so far has been intriguing. With the introduction of Javier comes a brand new cast of characters. Clementine does make an appearance and if you have played through the first two seasons, I do not have a doubt in my mind that your decisions may be swayed by her dialogue.

Episode 1 was very much packed with a ton of backstory. Due to the fact that there is an introduction of a new cast, Telltale needed to fill us in on what has been going on with them. Veterans of the game may be a bit disappointed by this due to our bond with Clementine. Fear not, as Telltale certainly recognizes this and satiates our thirst via flashback scenes with Clementine.

Episode 2 focuses more on moving the plot forward. The story though does give enough foreshadowing that makes certain events less surprising. This takes away from some of the suspense, but it does prove effective. The folks here at the Workprint, who pride ourselves as avid moviegoers, were mixed as to what we could and could not predict. Certain things came very obviously to some people and other things were missed. Regardless the plot has definitely been built and we here at the Workprint will wait through these long winter months for the arrival of Chapter 3.

P.S. – THIS ONLY GOES TO SHOW YOU WHY YOU NEVER MESS AROUND WITH MARRIED WOMEN!!!!!

@theworkprint
Follow
Previous article‘Gilmore Girls: A Year in The Life’ Is All Quirk, No Heart
Next articleTelltale’s ‘The Walking Dead’ Season 3 and The Problem with Episodic Games