‘Tales from the Borderlands’ Review: Life Lessons From Crime

Spoilers for Tales from the Borderlands: Episode One.

So you want to hear a story about vaults? Wait, you don’t? You want me to listen to the story and then tell you whether or not it’s worth sitting down and playing the story yourself? Well…I have some free time.

Enter, Tales from the Borderlands (Episode 1: “Zer0”), another offering from Telltale Games. In the same fashion used previously to take players into Westeros and the zombie apocalypse, TTG takes us to Planet Pandora in all the cell-shaded, over-the-top glory that is the Borderlands franchise. Now, I should interject here that games in this vein are not my traditional fare. I tend to stick to games that allow me a great deal of freedom to do what I want, when I want, but I’ve loved the Borderlands franchise for years, so it was an easy hook to get me to branch out. (Ed. Note: And I nagged you into it. – Jen)

Tales from the Borderlands stars the dashing protagonist, Rhys, a Hyperion corporation desk jockey, desperate to make a name for himself and become the biggest, baddest asshole in a company consisting entirely of assholes of various sizes and intensities.

Along with your trusty sidekick, best friend, and Google Glass beta tester, Vaughn, you set out to take on your arch-nemesis, Vasquez, in a power play years in the making, the specifics of which happen before the game starts, and are glossed over pretty heavily. Vasquez, voiced by Patrick Warburton, provides us with an easily recognizable voice early, which makes it appropriate that he collects his check for working the first five minutes of the game, and then goes on break for the foreseeable future.

Turns out Vasquez has already made his move, eaten all of your cookies, and worst yet, actually has sleeves. While he lavishes in his new corner office, enjoying the warmth of his torso AND arms, you uncover his plans to buy a vault key from a shady dealer on Pandora. So, while Vasquez takes a smoke break to go be someone’s paraplegic neighbor, you set off with a briefcase full of money (“borrowed” from the Hyperion coffers) to snipe the vault key from under Vasquez, and the second protagonist, Fiona.

Fiona, with her sister Sasha are a thief duo reminiscent of Wichita and Little Rock from Zombieland.  Their adoptive father-figure-who-definitely-won’t-betray-you-for-his-own-benefit, Felix, has carefully crafted an imitation vault key, and you make contact with August, who then makes contact with Vasquez, who mistakenly makes contact with Rhys, who makes contact with August, and they both make contact with the vault key, which makes contact with the ground. Got all that? The false vault key breaks, and when August is about to start making main characters die of acute lead poisoning, the deal is crashed by full-time bandit king and part-time DJ for-fire, Bossanova. Bossanova and his crew are being pursued by our old friend Zer0, the assassin from Borderlands 2, and during the scrum, Bossanova makes off with the money to his home base at “Definitely-Not-Thunderdome”, and the PCs all pile into the Mystery Machine and follow the cash.

The episode wraps up in a spy caper style infiltration of Definitely-Not-Thunderdome that allows for the gang to split up and make their attempts at getting the money back in various ways. Rhys and Sasha make their way in the sneaky way, and Fiona and Vaughn immediately get caught and end up impersonating bandit drivers in the race to win a very familiar Hyperion briefcase full of money. After what seems like 153,000 quick-time events to avoid dismemberment in one fashion or another, a fight between Zer0 and Bossanova that RUINS EVERYTHING, and the inevitable betrayal by a member of the team (definitely not Felix), the heroes are left without the money. Lucky for them, the Dungeon Master’s mom shows up to pick him up from the comic shop, so he hastily gives them all their experience points and treasure, the latter coming in the form of experimental Atlas Tech, including what looks suspiciously like a REAL vault key…fin. 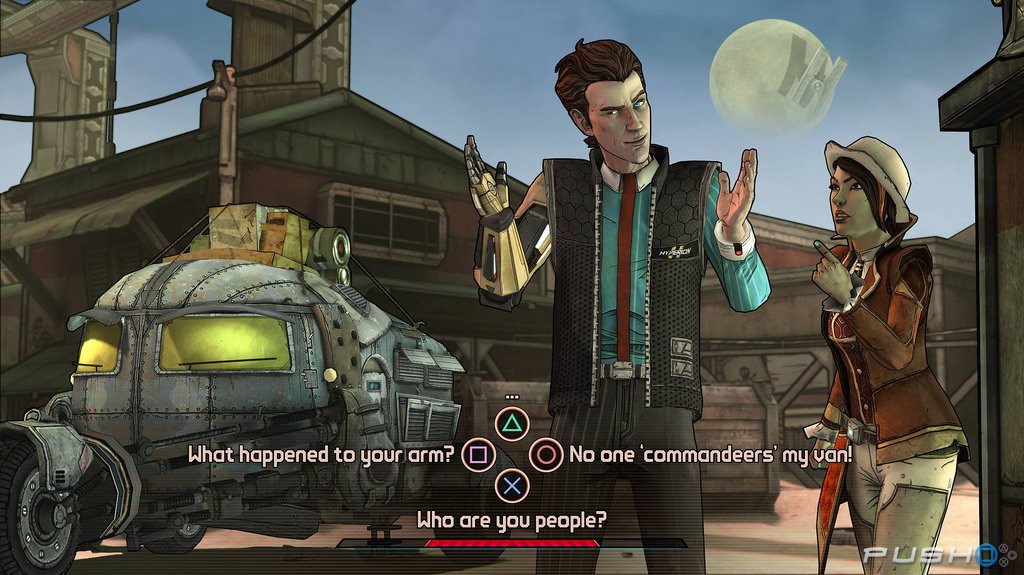 The conversations and dialogue are well done, and feature the Telltale Games choose-your-own-adventure system that turns every conversation into a quick-time event. The bonus to me, as someone who does not frequent these types of games, is that the Borderlands setting provides me with options that are, frighteningly, exactly what I find myself wanting to choose. Typically, my complaint about video games that limit your choices is that I find the choices boring. If you even get an actual choice in many games, it’s limited to “bad guy does A, good guy does B”, or, in the better productions, “let’s see if we can trick the player into doing something they really didn’t want to do.” The Borderlands setting, in all its unique glory, offers us another path: absolute chaos. If you’re familiar with Pandora from the Borderlands games, you should find the dialogue choices organic. During a jump scare moment, I found myself shouting “ASSHOLE!” at the screen, and was pleasantly surprised that the dialogue options included Rhys shouting “ASSHOLE!” and not just a boring startled noise. This is indicative of the rest of the conversational choices in the game, and it allows for a greater degree of immersion than the NPC interaction I’m used to.

Other quick-time events occur during the “action” in the game, including investigating your surroundings and taking part in aspects of combat, but to me it didn’t lend the same feeling of control as the conversations. Unlike the dialogue choices, the investigation into people and objects around you as you move through the environment seems less like actual gameplay and more like a “click until there’s a cutscene” time sink. The QTEs tend to be very simple and easy to pass, but are inconsistent with their placement and length, and carve up the “action” sequences in a way that didn’t enhance the storytelling at all for me. This could be a matter of personal preference rather than poor design, especially considering I was particularly bitter to have to clean chocolate off my keyboard when, while opening a Reese’s Cup during what I thought to be an appropriate time, I had to suddenly smash the ‘Q’ key to prevent some manner of violence from being inflicted upon my character.

I also found that the game seems to struggle to make environmental choices carry the same weight as dialogue choices. You get to click your mouse on plenty of objects and people in the environment, but rarely does it feel like you’re making an actual choice, and it reminds me of coming across the shotgun in Resident Evil 2 and being asked, “Take the shotgun?” with a Yes/No prompt following. Anyone who responds “No” in that situation should be put on a list.

Graphically, the game is standard Borderlands fare, with cell-shading, hard lines, and tons of gore. I did notice some shading issues and artifacts towards the end of Chapter 1, but did not investigate them too much, as they didn’t impact the actual gameplay at all. As is to be expected with a game in the style of a Borderlands game, some of the animations are choppy, and characters and objects tend to clip a bit during the action. It’s nothing too significant, and it’s what I expected from my experience with Borderlands, but I do think that, in a game with significantly less mobility and more emphasis on the cinematic quality, a little more work could have gone into smoothing the animations.

TL;DR: Despite this game not being my traditional fare, I enjoyed playing it. I wasn’t a huge fan of the execution of the quick-time events or the environmental interaction, and I thought the animations could use just a little polishing, but the dialogue options, characters, and storytelling overall made it a good experience.

7.5/10
Tales from the Borderlands was reviewed on the PC. 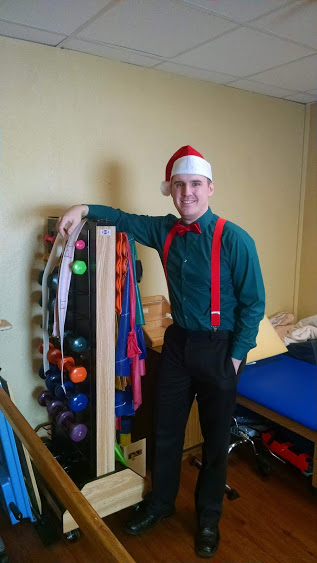 Josh Lemis
Josh is a full time pediatric therapist and part time game enthusiast, dog lover, and cook. He was recently voted "Most toxic League of Legends player to not receive a ban" by a group of his peers, and he has successfully managed to team kill his closest friends in over a dozen co-op games with friendly fire disabled. Josh can be reached on Steam via the handle "Ogion".

Previous article
Has ‘Jane the Virgin’ Finally Made Her Decision Between #TeamMichael and #TeamRafael?
Next article
‘Human Resource Machine’ Review: Coding Made Easy