This week on Supergirl: Alex deals with new emotions, J’onn learns the truth about M’gann, and Supergirl pays a visit to Cadmus.

Supergirl has had its highs and lows this season: Alex has clearly been the highest of highs for me and I absolutely love how the writers are handling her arc. James’s Guardian plot and Cadmus have been less than stellar and that feeling was solidified in “The Darkest Places.” However, we DID finally get a legitimate family with food apartment scene at the end of the episode. Here’s hoping they continue that trend some more. Or maybe they’ll just give me a full episode of the characters just being happy. One can dream, right?

James has been a vigilante for all of ten seconds and already he has a copycat on his tail. I’ll grant James his smug attitude because he’s has had a rough go of things lately: losing Kara, being named CatCo CEO, and basically being edged out of his role by an alien invader named Mike. I like James Olsen. I always have. I want good things for him, so I don’t begrudge him reveling in his successes, even when it’s mildly irritating. 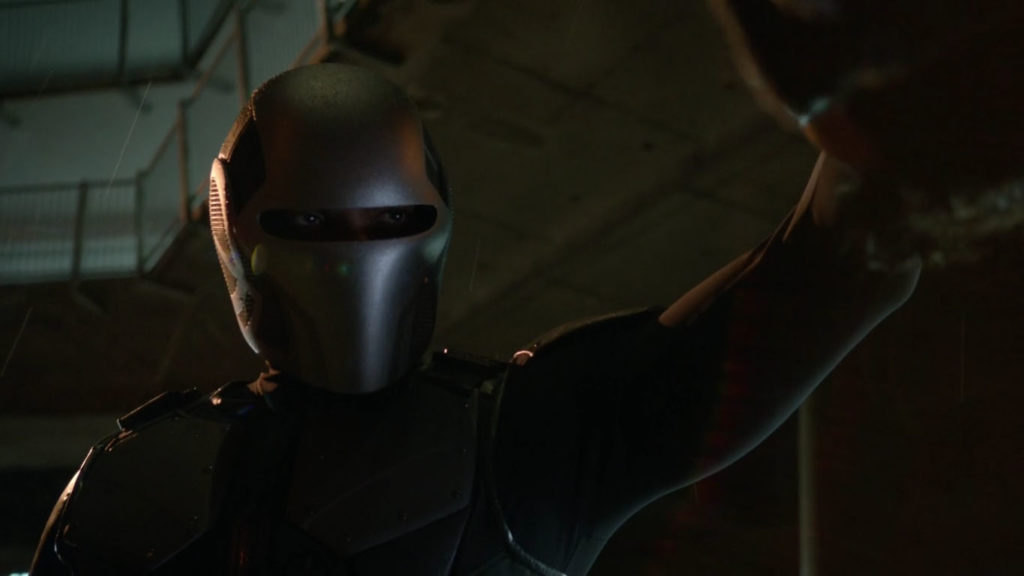 How-to-the-ever, here’s my issue with James in the role of Guardian: none of it makes sense to me. I know that it was mentioned in an earlier episode that James is a blackbelt and I buy that because the dude is ripped. (Even though I don’t know when he learned to fight with a shield.) But before that point, we never saw James even defend himself. He never put those skills to use in any situation and instead let Kara take the reins. And you know what? I’m okay with that, because if there’s one thing Supergirl succeeds at more than any other, it’s that it reminds us that not every hero helps by throwing punches. One of the best things about Cat Grant was her ability to offer honest opinions and bring about real change by using her media. James tossing that influence to the side in favor of a suit and shield because it’s the more direct approach in solving problems bothers me. Stopping crime through brute force seems like a “masculine” way of fixing the issue and I would have liked to have seen James instead step into more of a confident leadership role instead.

Then, of course, there’s the issue of him skirting his responsibilities as CatCo in favor of being a vigilante. We’ve seen on Arrow that you can’t have both and unless this means Cat is set to return to take back her job, I’m not okay with James running CatCo into the ground. The BIGGEST issue with James as a vigilante is that he refuses to tell Kara and for the life of me, I can’t understand why. Maybe it’s because he wants to win her back on his own terms, I don’t know, but it’s irritating that now with Alex learning the truth about James, everyone knows but Kara.

In the end, James puts a stop to the fake vigilante on the lose in National City with Winn’s help. They earned Kara’s begrudging respect and were able to get the media and the NCPD off Guardian’s back for a while. It wasn’t a bad storyline and I do enjoy the James/Winn dynamic, but with all the times we’ve seen this happen on Arrow, it’s kind of mundane. I’m not complaining because like I said, I do want James to be more active in the overall plot, but I have questions about him donning that suit.

Cadmus Is A Big Fat Hypocrite

At the end of last week’s episode, we watched Mon-El do stupid Mike things and get caught by Cadmus. If you aren’t sure by now, Cadmus is this season’s big bad and while I don’t love how things are playing out, I’m happy we’re finally seeing them in more of a villain capacity. They’re a bit too wormy for my tastes, but hey, maybe they’ll surprise me.

Kara falls into their trap and stupidly ignores Jack Donaghy’s advice and follows the hippie to a second location. She doesn’t give anyone a heads up as to what she’s doing, presumably because she believes Cadmus has somehow infiltrated their comm devices (which is a huge issue that maybe she should mention to someone). She fights the original Hank Henshaw who has clearly been working out during his sabbatical from the DEO. He’s a smidge angry about the whole “aliens are acting as heroes on my planet” thing and he’s funneled that rage into becoming Cyborg Superman. (Yes, Bilal, I know it’s a stupid name.) Mama Cadmus shows up and asks Kara about the nature of her relationship with her daughter, Lena. She spouts some nonsense about Superman abusing his power and getting Lex into trouble. Clearly, she’s delusional. But I want to point out here that the moment that Kara thinks Lena might be involved with Cadmus, she loses her composure. Even Mama Cadmus has to stop her villain monologue to ask if everything is okay. I know the show is trying hard to ship Kara with Mon-El, but that quick moment was enough for me to fuel the S.S. SuperCorp for another few episodes. TOOT TOOT.

Mama Cadmus then does some experiments on Kara in which she stupidly doesn’t fight back. Honestly, Kara, you are SUPERGIRL. You have a bajillion powers at your disposal. Mama Cadmus is a relative unknown in terms of abilities, but TRY to fight back against her and the TWO DUDES holding you captive. You’ve fought worse. You’ve seen what they’ve done to other humans. DO. NOT. LET. THEM. TAKE. YOUR. BLOOD. GIRLFRIEND.

But she does (ugh) and then she and Mon-El share a heart to heart moment. I know I’m supposed to hate Mon-El for being such a Mike and all, but dammit if he isn’t growing on me. The real star of the cell block tango scene is Kara; in particular, when she talks about Alex. Any time the sisters talk about one another, their eyes shine, and I don’t have anything intelligent to add other than I LOVE THEM OK.

In a turn of events, Jeremiah Danvers shows up and Kara is all, “DAD! We were TOTALLY just looking for you.” Jeremiah saves Mon-El from his lead poisoning and then scurries the both of them out of Cadmus before giving Kara a heartfelt goodbye. Now, I’m not some naive spring chicken. I know a twist about to occur when I see it and gosh darn it, folks, Jeremiah Danvers is about to flip some heads. He’s been at Cadmus for fifteen years as a prisoner and you mean to tell me he overheard that Supergirl was imprisoned, knew it was Kara, and then escaped, stole a key card, and spirited her ass out of there? No, no, no. We know from earlier in the episode and how Hank played Mon-El that Cadmus isn’t above “using” the heroes’ sentimental sides against them. Jeremiah only looks like Jeremiah. I can almost guarantee that he’s not the man Kara and Alex once knew, which breaks my heart because of the look on Alex’s face when Kara told him her father was alive: 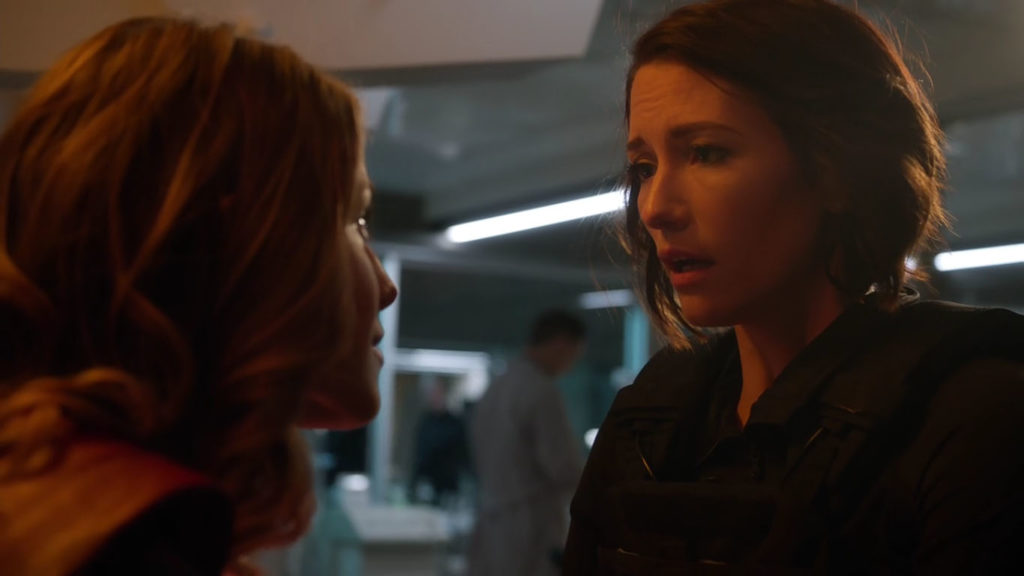 There are so many “potential” relationships happening on Supergirl right now. I’ve already touched on Kara and Mon-El and I think that’s the one that will come to light the soonest, but there are two slowburn relationships in the works and I want to talk about them more. First up, is the relationship brewing between J’onn and M’gaan, which is an odd sentence for me to say since I still think of M’gann as J’onn’s niece. Last week, M’gann saved J’onn’s life by giving him some of her blood, but since he’s a Green Martian and she’s a White Martian, there are some side effects, like hallucinations.

It’s amazing to me how quickly J’onn goes from affectionate, borderline creepy, to aggressive and hateful where M’gann is concerned. Yes, she’s made some mistakes and she’s lied to him about her true self, but I would think that J’onn, of all people, would be more compassionate about someone keeping a secret about their true identity. Supergirl has really laid on thick the fact that heroes like J’onn and Kara can be, and are, prejudiced against other races. The pair of Martians fight and J’onn eventually captures M’gann, imprisoning her at the DEO, but then she drops a bomb on him that her blood is turning him from Green Martian into a White Martian. He’s becoming the thing he hates.

The second relationship is the one I can’t stop talking about, the slowburn of all slowburns, Alex and Maggie. Last week, Alex put her heart out for the world to see and Maggie inadvertently smashed it to pieces. Alex is, understandably, upset with Maggie and dodges all of her calls in an attempt to free herself from the pain. Maggie doesn’t want to lose Alex because she values her as a dear friend, so she keeps trying to bring Alex out of this dark hole she’s found herself in. Alex lashes out at Maggie and explains why they can’t be friends anymore:

Alex: “I was sure of one thing and that was my feelings for you. Initially, I was terrified, but ultimately I was proud to come out because it wasn’t just some concept, it was about my feelings for this amazing woman. But now, I don’t feel liberated or like I’m on some great journey. All I feel is pain because you don’t want me.”

It would be really easy to hate one or the other in this relationship, to take sides and declare Alex as angry or Maggie as intentionally hurtful, but I have to applaud Supergirl with how they are handling both characters. It’s one of the few relationship struggles on television where I can genuinely empathize with both sides. It doesn’t mean it’s not breaking my heart, but I get it. That being said, I’m still not convinced that Maggie doesn’t have feelings for Alex. I think that Maggie is engaging in a little self-preservation where Alex is concerned, but she fights SO hard to keep Alex in her life that it’s hard not to read into it a little. 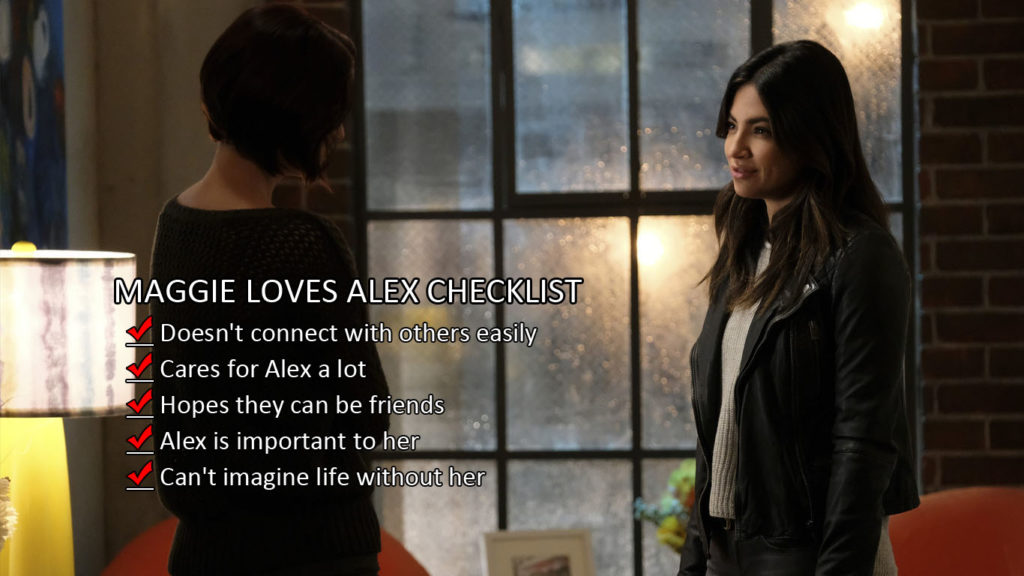 Maybe next week we’ll hop back into the friendship and subtext when the two meet up to play pool.

Cadmus wants to end alien life on this planet…while using their technology? What a bunch of hypocrites.

SERIOUSLY WHY IS JAMES KEEPING GUARDIAN A SECRET FROM KARA.

Chyler Leigh and Floriana Lima really enjoy teasing the hell out of us, don’t they? 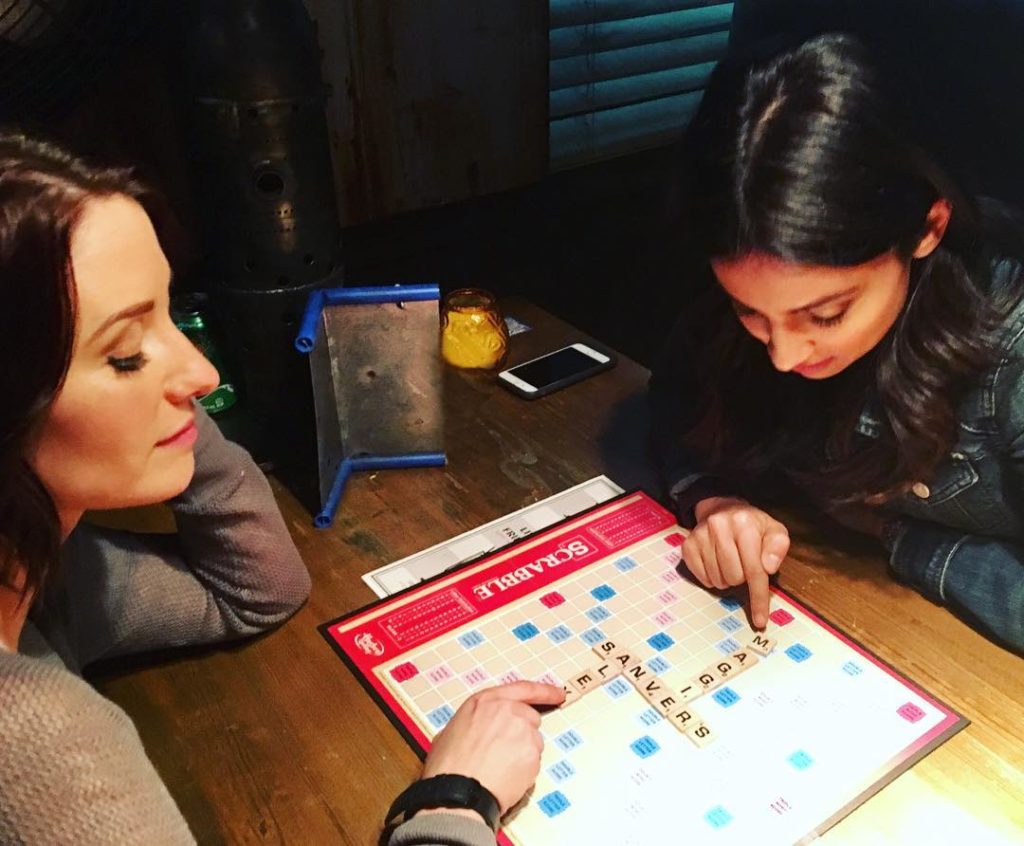 Previous article
‘How To Get Away With Murder’ Review – “Who’s Dead?”
Next article
‘Supergirl’ Review: Kiss The Girls You Want to Kiss