Eric Wright (AKA “Eazy E” – played by Jason Mitchell) walks into a house in the middle of South Central Los Angeles ghetto. He’s selling Dope to the residents of the neighborhood. His buyers try to screw him and say that he’s short on the delivery. Eric wants his money and doesn’t have time for games. The half dozen men and women of the house, high as kites, surround him. The Second Amendment is heard clicking and loading from every direction. They tell him to get lost or face the consequences. Eric shows no fear. He has a reputation in these parts and he tells them that if he leaves with no money, they’ll all be very dead, very fast at the hands of his colleagues. It’s nothing personal. This is his business. This is what he does. But before we get down to business, the L.A.P.D. crashes the party. While the residents of the house freak out and hide contraband as quickly as they can (a moment that’s almost darkly comical: they do this as if they’ve been running weekly drills for just this sort of situation), Eric runs as fast as he can in the other direction, escaping the wrath of the law.

These are the opening moments of “Straight Outta Compton” and they’re about as brutally honest and genuine as it gets. These are the moments in the film that work. This sort of raw, visceral emotion and behavior was the driving force behind the infamous “N.W.A.” (AKA, “Niggaz Wit Attitudes”) who, for better or worse, revolutionized the world of hip-hop and rap. 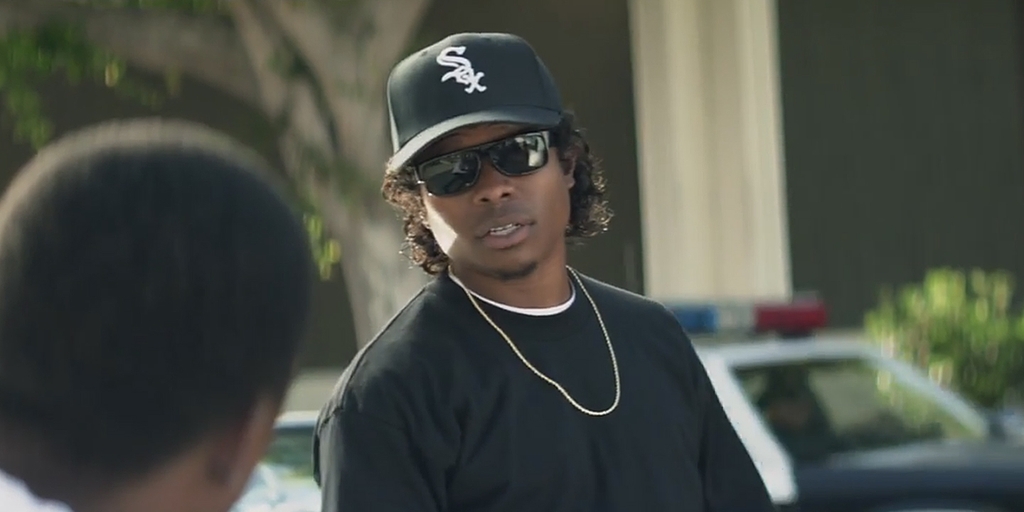 Eric is the central figure in the film. Known as “Eazy E”, he’s brash and arrogant and puts up the money to fund the group at the suggestion of Andre Young (AKA “Dr. Dre” – played by Corey Hawkins). Andre is portrayed as a musical romantic, mixing together the styles of the old school soul/jazz movement in Marvin Gaye, James Brown and even Duke Ellington to give his listeners music they’ve never heard before. The group’s writing is all done by O’Shea Jackson (AKA “Ice Cube” – played by Cube’s son, Jackson, Jr.), giving their audiences a glimpse of their lives in Compton, California. Even as they quickly gain fans, they also manage to attract the ire of local and federal law enforcement due to the fact that they’re “sexually obscene” and “promote violence”. Also, it could be that their song “Fuck tha Police” might have something to do with it. The media does them no favors, presenting N.W.A. as antagonists for the sake of being antagonistic. Little do they realize that these men grew up in a society full of corrupt cops who have nothing better to do than harass Compton residents, something the movie never lets you forget, beating you over the head with police characters who only have three lines: “get on the ground”, “hands on your head” and “we don’t have to tell you what we’re looking for.” 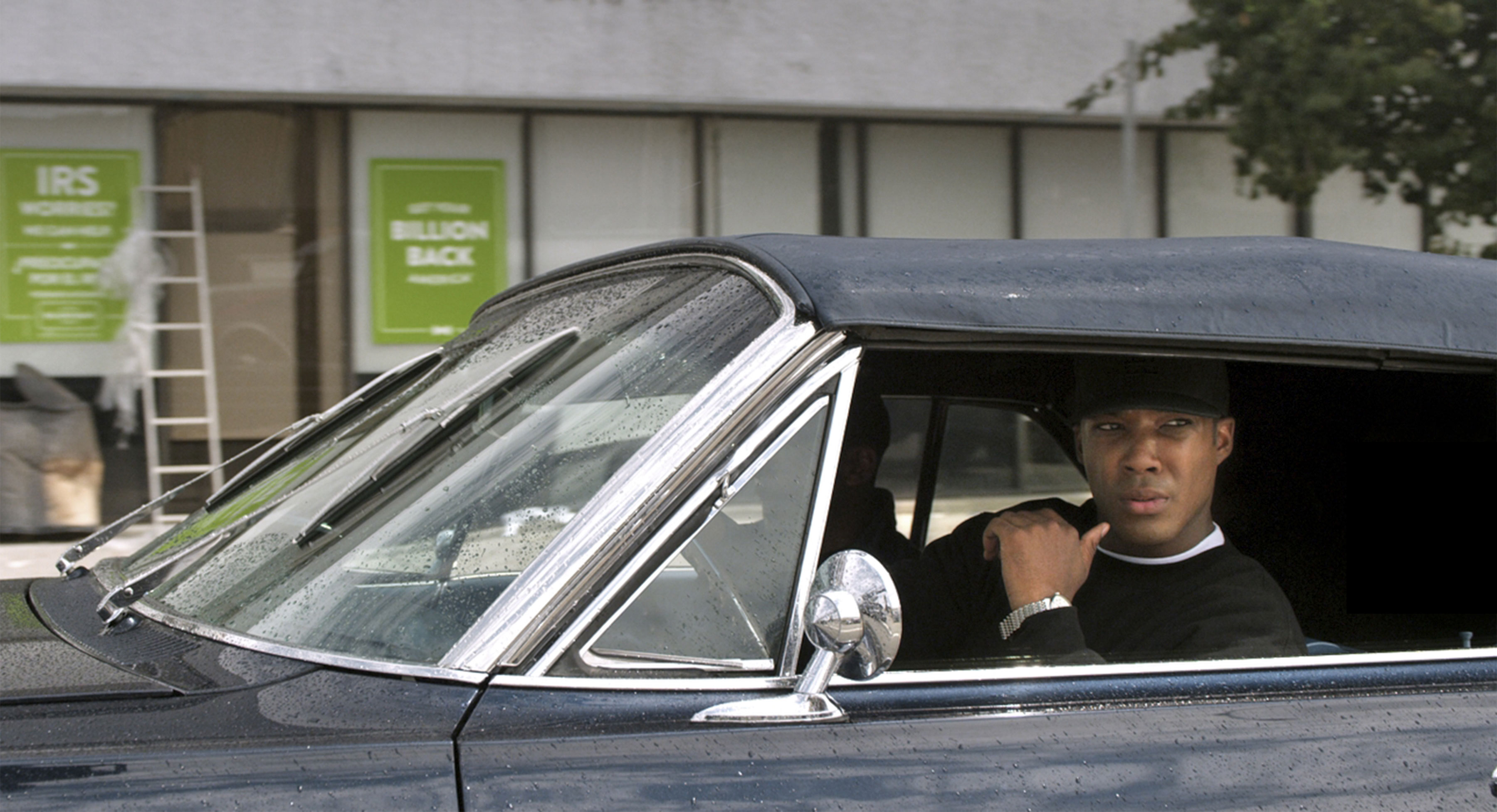 Together, the group creates “gangsta rap”, where the lyrics are hard and angry, telling stories of life on the mean streets of L.A.’s worst neighborhoods. The group’s unlikely rise to stardom is due, in part, to Jerry Heller (Paul Giamatti), an agent who E reluctantly brings on despite the fact that every artist he’s represented saw their peak popularity in the 70’s. Heller is intrigued with E and does his best to represent his interests — something the rest of the group takes exception with. This drives a wedge between E, Cube and Dre and they eventually go their separate ways. Cube forms a successful solo career and then branches out into the film world while Dre signs with the menacing, borderline psychotic Suge Knight (R. Marcus Taylor), a man who beats people up just for accidentally parking in the wrong spot in the parking lot.

It’s not entirely difficult to tell a story like this and director F. Gary Gray is probably one of the more logical choices to helm the proceedings, having worked with producer Ice Cube on Friday and his music video, “Today Was a Good Day”. After a recent string of flops (Be Cool, Law Abiding Citizen, A Man Apart), this is a welcome return to form. The problem is that he keeps things far too simple and doesn’t really give us anything groundbreaking or profound to latch on to. The script, written by World Trade Center scribe, Andrea Berloff (and newcomer Jonathan Hermah), is surprisingly bland. Even the dramatic bits don’t give way to any deeper meaning or pathos. Racial tension is limited to various bouts of police harassment which are so overly-theatrical and hokey, they come across as unintentionally funny. The film touches on the L.A. riots following the Rodney King beating — but nothing much is explored here, except for N.W.A. taking a ride through the city as it falls apart around their ears. This is very surprising to me, given the nature of the group and what they stood for, as well as the current racial climate in the United States. This movie could have been a statement to that effect. One gets the feeling that the film wants to say something, wants to add a voice to the growing social commentary — but, strangely, it seems restrained. Thus, the aspirations to be the Next Great Docudrama are dashed and the film continues its course into ordinary monotony, broken up with the occasional burst of overwrought embellishment, that it’s less Ray and more Fear of a Black Hat without the jokes.

For what it’s worth, Gray is blessed with one hell of a cast. The cast that makes up N.W.A. are all brilliant. They not only have the mannerisms and voices down, they all have an intensity. This goes double for Giamatti’s performance as Jerry Heller, a role that he can play in his sleep. He brings an emotional nuance to the part, serving as the agent holding his team together as well as a surrogate father to Erick — who actually listens to what Heller has to say despite his rebellious nature. Taylor’s “Suge Knight” is also exceptional, portrayed as The Devil to Heller’s white-haired angel. When Taylor looks at a character, you can almost see him envisioning ways to end their life. He’s truly frightening and intimidating and you hate him for it. It’s fascinating to watch each of these people grow as the movie progresses. While E is rap’s Peter Pan, the ghetto kid who never grew up, Ice Cube and Dre break from that world. Cube becomes a family man, raising children, writing movies and looking back on his rap days with happy sentimentality while Dre becomes the consummate businessman, building his own label and selling his own brand of headphones. You’d swear that they aged in front of your eyes, the performances are that good. 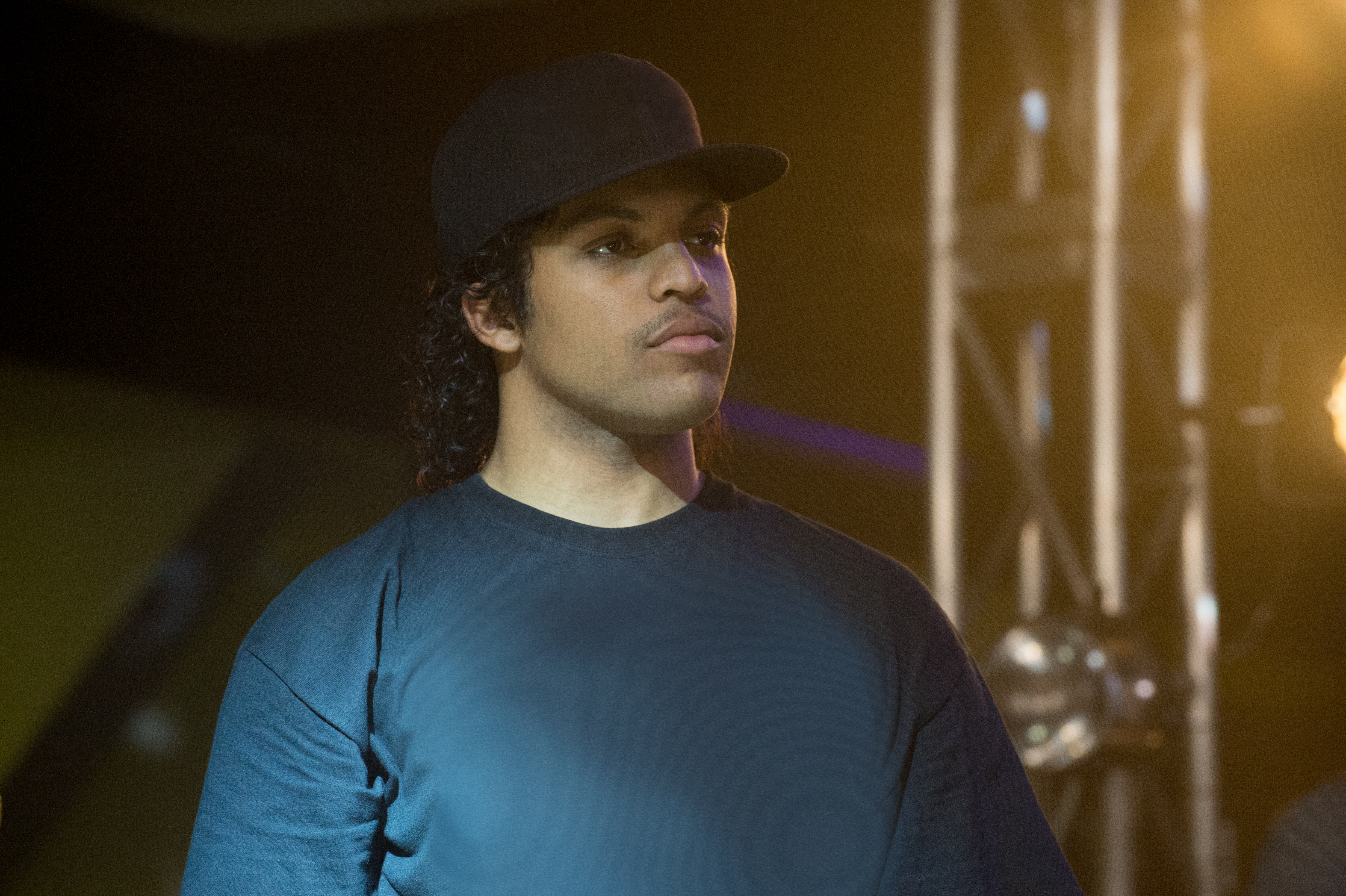 As far as the controversial subject matter, there’s just no getting around it. The movie does try to be as straight with the audience as it can, pulling almost no punches from the group’s intensity to their complete disregard of the rules and the law and their lack of respect for women on the whole. Of course, that doesn’t mean that it’s confession time for all involved. Certain inalienable truths remain off-screen like the time E used $250,000 of his illegal drug sales to initially fund the group or DJ Yella quitting the business to produce porn for the next 12 years or Dre’s abusive behavior toward both cops and women — most notably, slamming a woman’s head into a wall and throwing her through a glass door — but who’s interested in something like that, huh?

Overall, the film simply plays out like your usual biopic and, despite its run-time, it feels hurried, almost becoming a Grand Theft Auto video game based on the group’s Wikipedia chronology and a YouTube compilation of their greatest music videos. Sure, it’s entertaining and, at times, fascinating, but ultimately hollow.

“Straight Outta Compton” is in theaters nationwide as of August 14, 2015.