In Stargirl’s “Brainwave” and “Brainwave Jr.” we learn a lot about the meaning of family… Full Review.

If I were to sum up Stargirl as a series, I would describe it as a campy teen melodrama about a family of superheroes and villains. A classic tale of good versus evil, Stargirl is surprisingly, about families. People living in Blue Valley who had lost loved ones on both sides of the JSA vs. ISA war.

I missed last week’s review due to my own personal familial responsibilities. Thankfully, I got back in time to review these very family-centric episodes, about the supervillain Brainwave and his son Henry (aka brainwave Junior). And just like the legacy passed down from Dr. Ito to Shiv and their twisted daughter/daddy relationship, this episode focuses on much of the same concept: the legacy — and gifts — bequeathed from Brainwave senior to junior.

And like a small hangover, this arc is rather exhaustive, naughty, indulgent, and brought along by its own sense of daddy issues. Which is to say: it’s pretty entertaining. 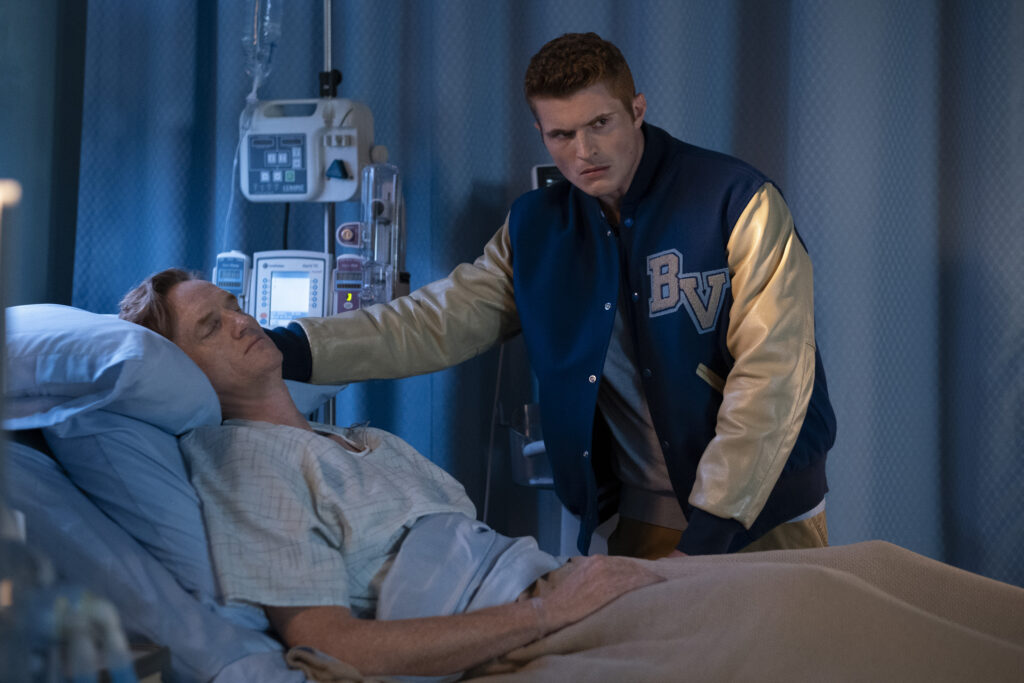 This episode saw Courtney seeks out to try and recruit Henry, even though he’s somewhat of a bully and much-hated antagonist of the new members in the Justice Society. He’s slut-shamed Yolanda (who confronts him about it later in a half-hearted attempt at contextualizing her story arc), dated Cindy/Shiv, and is himself, the son of a supervillain, all red flags as to why this is a bad idea.

Still, the episode follows Henry’s story as he gets to know the deep secrets and abilities of his father, Brainwave. This episode sees Henry fast-track his training, as he watches hundreds of tapes of his father and how he learned how to utilize his powers and cope with his abilities over the years (an odd convenience to have that many tapes recorded and lying around?). He also learns, much like his father before him, that humanity is awful. As the Brainwaves are tormented with their telepathy. Reading the vile thoughts that litter everyone’s minds. Deducing that at their core, all people are monsters.

Meanwhile, Pat shares more bits of history including his and Starman’s time with the Seven Soldiers, a superhero group they were a part of before the JSA (and a likely plot-point later. We’re looking at you Mr. Janitor) At this point, it’s obvious that Pat’s history reveals are more plot conveniences than any real sort of build-up, though Pat does struggle in this episode in wanting to share his secrets with Barbara, much to Courtney’s dissuasion. Ironically, the issue becomes forced upon them, as we get a ‘Guess who’s coming to diner’ plot (like in Sam Raimi’s Spider-Man) where icicle arrives for dinner with his family.

Also, they may be Norwegian Ice Trolls…

It’s a reveal which would be surprising, except for the fact that Stargirl does this all the time, and at this point, we’ve sort of accepted all forms of superhero conventions, ridiculous coincidence, and supernatural abilities.

And while we’re at unsurprising conventions, I’ll also throw it out that we finally learn the ISA’s big plot… which is the same plot almost every villain has in every story ever: world domination. I won’t go over the full method, but I will say: it’s pretty stupid. No, to be honest, it is really stupid. But I don’t think the audience cares why the villains are plotting this, so long as the characters have payoffs and motivations. A solid episode for its tension though lacking in terms of originality. 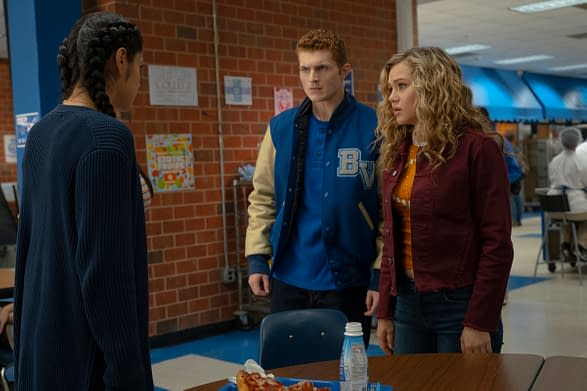 So this episode was so good that it makes me give Stargirl a full endorsement. To begin with, we finally get to see Pat and Barbara interact in extended scenes together and finally build-on a relationship that we’ve thus far have been ‘told’ is one but haven’t fully ‘seen’.

Well, that changes over a banana split here and it’s cute. I personally loved it and am glad we finally see Pat and Barbara not just together, but working together. It sells them as a couple really well in this episode, especially, towards the backend where we see both he and Barbara grow as characters.

Meanwhile, we get more Henry Jr. as he becomes a better psychic especially now that his father is awake. We learn some motivations and some tragedy, especially regarding his mother and the blood ties of his family to another superhero, which coincidentally, ties into the larger story again (I say again because this happens A LOT in this series. Everyone is related. Everyone wants to avenge or prove to each other’s parents).

As a result of all these avenging the family type of quests (seriously, with the exception of Beth, it’s oddly almost everyone in the series), we finally see the JSA take on the ISA and proactively hunt down and stop them in person, with stellar action scenes where we see everyone do a little bit of everything in terms of both fighting and sleuthing.

However, things did not go the direction I expected. Minus the spoilers, this episode had what was easily the most shocking conclusion in the series to date. It’s something Stargirl does incredibly well: gives us the tropes and campiness and setups so we think we know what’ll happen, then blindsides us with some crazy arcing narrative twists.

Suffice to say, this was my favorite episode of the series. 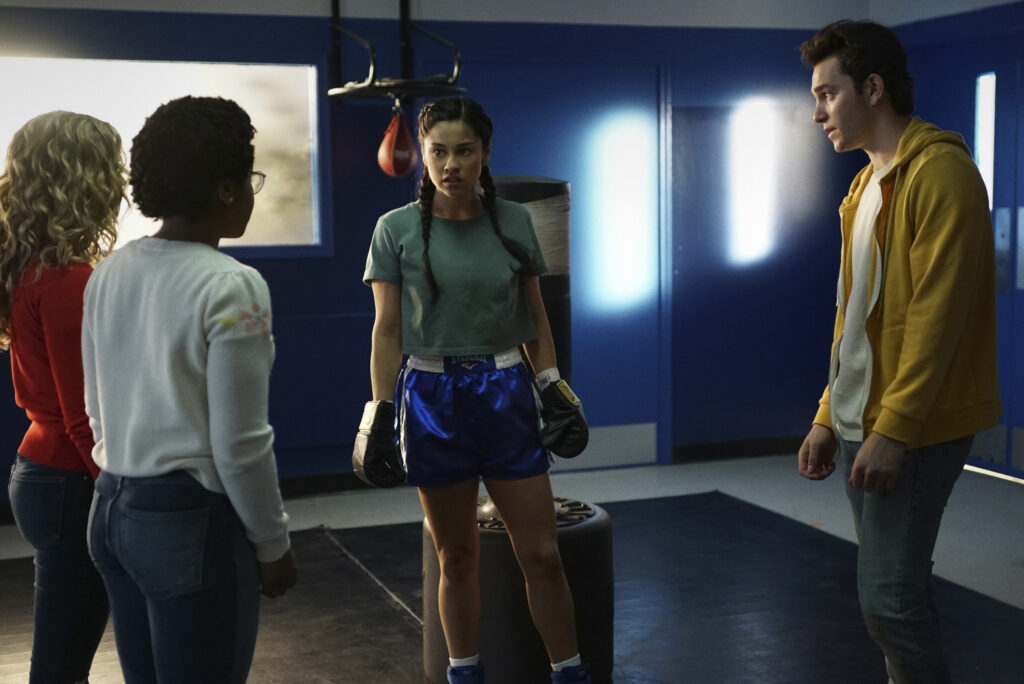 This show hits its stride when it can assemble the team in an organic way that gets everyone going. What I loved about these two together, was how it built up to that conclusion which hit super hard. I did not see that coming, nor do I think the audience will either.

In particular, the Brainwave family is pretty messed up. I’d always liked them as distant villains, though I always thought they’d be a throwaway arc. Maybe a minor role to be brought back towards the backend of this season (Which seems to be Hourman’s role now). I was wrong. Not just about them but about everything. This episode was superb, a stellar message of hope, redemption, and the nature of evil.

I think the Brainwave episodes let me honestly endorse this series without shame. Whereas before this was a guilty pleasure watch for me, and at best: campy fun, now I’ll honestly say: Stargirl is a pretty interesting show worth the watch.