You’ve seen this scenario in every slasher film. It’s a late evening in a cabin by the lake, where a group of teenage girls — dancing freely, half-naked, without a care in the world — indulge in some provocative vices: alcohol and Mary Jane. They gossip about sex…and boys. They do the things which every teenage boy of the era imagines girls do at slumber parties.

But there’s something amiss. A perverse voyeurism in the distance. Just as we the audience watch this unfold from the male gaze, so too, does a man lurk from the shadows. An eeriness beyond the vale we’ve been too distracted to see. A merciless serial killer who arrives to murder everyone and everything, showing audiences immediately what’s at stake, and more importantly, reminding us not to gaze…for fear of what’s behind you.

This is the formula for almost every slasher movie ever created. It is also, the very beginnings of the new Slumber Party Massacre, a modern SYFY Network rework of the horror classic from the 1980s. Whereas the original was a feminist parody of the slasher genre directed by the great Amy Holden Jones (Mystic Pizza) and co-financed by the legendary Roger Corman (the reason the original series was male-gazey with its nudity), this remake takes a lot of what worked about the original and runs even further with it. Doubling down on its focus on its female leads while creatively taking a new approach to the final girl trope in unique ways.

Feminist filmmaker Danishka Esterhazy continues this legacy, by brilliantly poking fun of some of the well-known slasher-movie caricatures of women. The weirdly long and close-up takes of the female anatomy. The…why not have a dildo while attractive half-naked girls dance and eat unrealistically large slices of pizza, all while debating topics about superheroes (quite literally, the movie’s opening scenes). Almost everything about the early slasher genre in its early days was crafted to indulge in a teen boy’s fantasy. This is why, how Esterhazy remakes Slumber Party Massacre is in acknowledgment of its past, but more importantly, its subversion of expectations; knowing full-well the tropes portrayed in horror media for the past 30 years.

Without spoilers, I’ll say the movie hits all the right beats in terms of its horror. The kills are gruesome and more so creative than cringeworthy. The plot likewise, hits all the right creative turns, and the character motivations are honestly pretty on par with some of the best teen horrors out there such as Happy Death Day or even Esterhazy’s last movie for SYFY The Banana Splits. But what’s beautiful about this movie, something that absolutely made me laugh out loud at everything with an in-on-the-joke kind of way, is how great the pivot is regarding the slasher film meta, going in an entirely different direction. 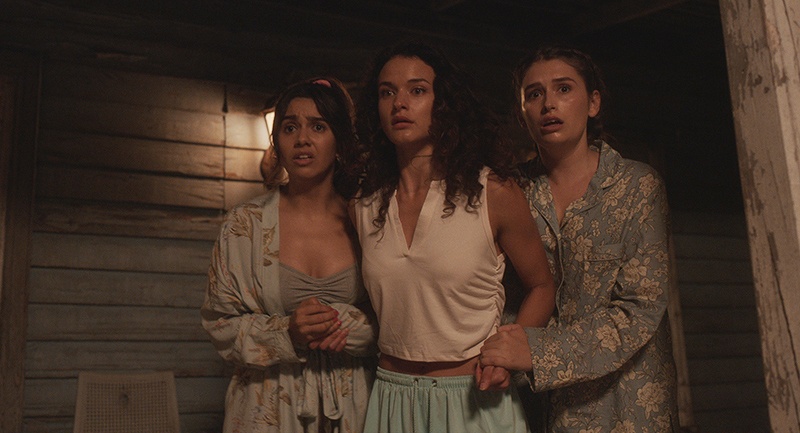 Yes, the script gets flipped. And it’s pretty damn hilarious. Without context or spoilers, you really are going to want to see the clever ways this story flips everything we’ve established, by using the men as the objectified sex objects this time. A “what if” situation where instead of gratuitous female skin moments, we sort of replaced it with ditzy dude-bros, who are just as incredibly fit as they are stupid. Doing things like engaging in pillow fights while showcasing their eight-packs or having slow-motion shower moments in the most ridiculously kinky censored-for-cable-TV close-ups. That’s one of the best things about this film: that the movie looks at toxic masculinity and the male gaze and completely flips the script by making it about sexy objectified boys.

For what it is, I also thought the cast did a fun job. Every actress was spot on and even the intentionally bad moments, were intentionally placed there for hilarity. When you finally accept the movie’s more parodic themes, just like the original, it’s an entertaining and silly enough ride. With enough relevance where it feels woke enough to know that it’s poking issues within the genre just like its predecessor. My only personal complaint: is the horror didn’t surprise me, but I do watch a lot of horror.

I think most importantly, the thing most audiences will take away from this movie, is that the metanarrative really sells this story well. Previous knowledge of slasher movies and how this sort of takes a different approach, is the best place to set the bar of expectations. Also, I really liked that the women do a great job of supporting each other in this movie; as this is not one of those: women-against-women films where they vie for a man’s attention. Screw the male gaze. Which honestly, is exactly what Slumber Party Massacre should be.

Previous article
Three Episodes in…Ordinary Joe
Next article
‘What We Do In The Shadows’ Recap: The Wellness Center