As is often the case this season, those at Pied Piper usually end up being their own worst enemy. Whether it’s Dinesh wanting to build the server room and blowing out the power grid, or the gang revealing in-depth secrets to their rivals at EndFrame; their misfortune is usually the byproduct of their own actions.

This continues in “White Hat/Black Hat” as Richard’s conscience, still reeling from his actions in the previous episode, leads him to meet with Seth Lee – the recently fired security employee from EndFrame. During their meeting, Richard’s best intentions to put Seth’s mind at ease creates the opposite effect. As Seth, irate over his unjust firing and Gilfoyle’s incessant torment, leads him to put a pox on those at Pied Piper and their system. This leads Richard going down a rabbit hole of paranoia, worried that they’re now exposed on multiple fronts to an imminent hack from Seth. Gilfoyle and Dinesh assure Richard that Seth will not, and cannot, do anything to their system. Still paranoid of an impending attack, he schedules a meeting with Seth yet again to reason with him. However, as is Richard’s main character flaw, his big mouth betrays him and he infuriates Seth even more. That night as the transfer from Intersite initiates Richard is a wreck. He paces nervously, constantly questioning Dinesh and Gilfoyle about the security – and then there’s a knock at the door. 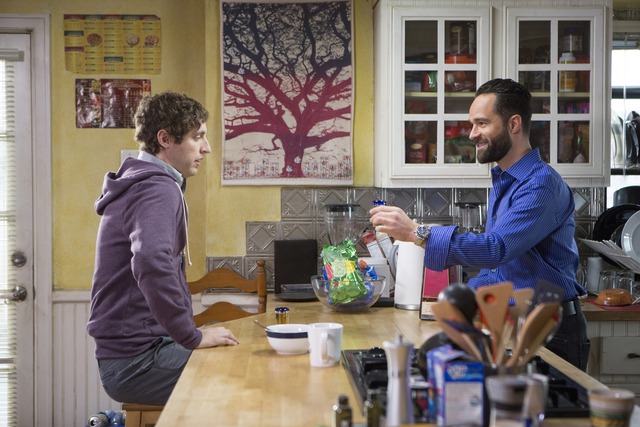 Now although the threat of getting hacked turns out only to be an adult themed ‘Boogey-Man’ the real threat – as is often the case – comes from within. Despite knowing the vulnerability of their system and locking down the house (literally and virtually), Richard reluctantly lets Russ into his house. He’s there to pick up their celebratory drinking session, but Richard finally puts his foot down, snapping on him for not giving them their promised funding. This leads to an absurd scenario where Russ shows them his reacquired MacClaren, when (predictably) everything goes to shit. Files are disappearing off Intersite’s server and neither they nor Pied Piper know why. Richard presumes that it’s Seth getting retribution, until Russ lifts his Tres Commas tequila bottle off one of the laptop’s ‘Delete’ key. Yet again Pied Piper was – to quote Erlich from an earlier episode – “hoisted by their own petard.”

This trend of self-destruction, can be fun (albeit nauseating) to watch, but it’s getting a bit tired. I can no longer enjoy any headway the group makes as I know newer, more serious pitfalls, will eventually arise. Now, some might call this storytelling, and while I agree that the show does a great job placing new obstacles in their way while continually raising the stakes, I feel that their characters aren’t learning from these misfortunes and that sheer luck is the only thing keeping them above water. It’s this “one step forward, two steps back” method of storytelling that wears on my enjoyment of the show.

Early in this season Pied Piper was up against external factors, coming chiefly from Gavin Belson. But after that UFC debacle, he’s aware of how terrible an operating system Nucleus. Thus his attention is focused elsewhere as he fends off adversaries of his own – manifested as the big bad Hooli Board of Directors. During one of their meetings, he dismisses the extensive marketing campaign as “in the box”, touting Nucleus’ revolutionary capabilities should be shrouded in mystery until its release. He also courts Bannerchek again, bringing him in as scapegoat for the devices pitfalls. After seeing the device, Bannerchek literally flees “doing 73 in a 25” to get as far as he can from Belson and his ruse. 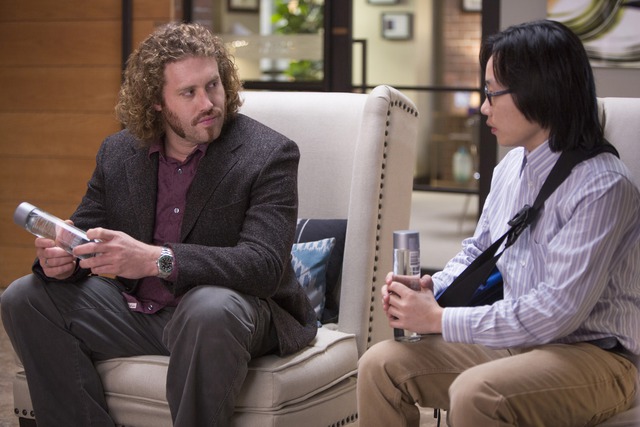 This episode’s subplots were more entertaining – possibly because they didn’t induce nausea like the main plot-line did. Other than Belson’s maneuverings, Erlich brings his other “incubee” Jin Yang to meet with Monica regarding his playground app. On their way inside, they find her smoking a cigarette – something that is highly frowned upon in Northern California. This leads to Erlich (yet again) delivering the best line of the episode. (“-this is Palo Alto, people are lunatics about smoking here. We don’t enjoy all the freedoms you have in China.”) The entire interaction between Ehrlich and Monica is refreshing as he’s usually accompanying Richard when they interact and playing second fiddle in the scene. This pairing of Jin-Yang and Erlich is always fun, and even though this isn’t a catch phrase style show, I’m still waiting on Erlich to shout out “God damnit, Jin Yang” at least one more time before this season ends.

My criticism of this show is all rather nitpicky, as I look forward to the episodes week in and week out. The dialogue continually wavers between good and excellent and the best lines are spread out evenly among the cast. I’m merely beginning to fatigue over the pattern of unfortunate circumstances that continue to befall them, but I have no doubt that I’ll be going through withdraw after the season finale in two weeks.