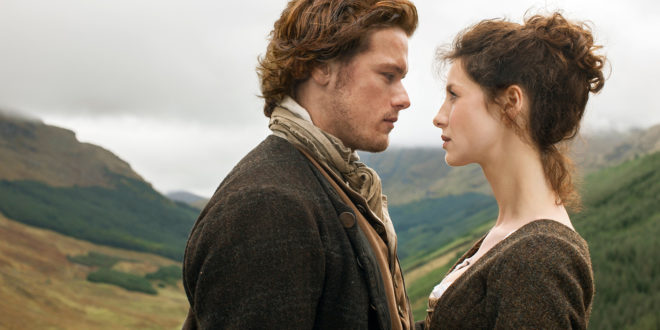 The Show That Promised Smut, ‘Outlander’ Is Back With a New Trailer

See, Starz, this is exactly what I meant when I complained about the significant gap between the first and second half of the Outlander season. Too much time has gone by and I’m too excited about the return of Game of Thrones to get invested in Outlander again. But hey, the trailer looks good?

I mean, I’m not entirely sure about the plot, but Claire loves Jamie now so I suppose that means she doesn’t want to get back to Craigh na Dun or die trying, which also means, I hope, less Caire-ation. And no matter how pretty Sam Hueghan is (and oh boy, is he), I can’t get over the fact that the episode on April 4th will have to feature that scene. You know which one I’m talking about. Everyone who’s ever read the book or come in contact with fans of the series knows about the scene. It causes more division than the rape scenes in Game of Thrones, than Jacob/Edward/Bella/Mike/MarySue, or even which “Star” is better–Wars or Trek. Fans of the series argue historical accuracy and dissenters shout about romanticizing domestic abuse. After spending eight episodes building the trust between two main characters, then taking an extended break, I find it absolutely ridiculous that Starz would bring the series back with that scene.

Outlander returns April 4th. Jen will be watching, but she can’t promise she’ll be happy about it.

Don't let the fancy nerd duds deceive you; Jen’s never been described as “classy.” You can find her on Twitter where she stalks all of her favorite celebrities: @jenstayrook. Or you can find her on Steam or Xbox dying in every game she plays as "Rilna." Email: jen.stayrook@theworkprint.com
@jenstayrook
Previous ‘Selma’ Review: More Depressing Than Not
Next The CW Renews ‘Arrow’, ‘The Flash’, ‘Jane the Virgin’, and Five More

‘Outlander’ – “All Debts Paid”: Prison Comes In Many Forms

‘Outlander’ – “Surrender”: Jamie Gives Up Everything to Stay Jamie

‘The White Princess’: Romance and War blossom in “Burgundy”

“What have they done to us? We are their creatures.” This week on The White …