Fin Shepard (Ian Ziering) fires a gun at a storm — and it changes course. The storms are more dangerous than ever, assuming the natural life force of what ever it runs across. Oh, hey! Welcome back to another sequel in the Sharknado franchise. It says something that even though SyFy’s Asylum features aren’t really meant to be judged by the same merits as, say, “The Force Awakens” (for some reason, that film was on my mind; don’t ask me why), the film still manages to be ridiculously stupid.

Fin Shepard and his family have been living in the country, virtually off-grid and away from anything that could be construed as a Sharknado. “Astro X”, a space-tech company has found a way to rid the world of them anyhow (they fire upon stray sharks, which are still alive and well, in space) so nothing bad could possibly go wrong again. Ruh-roh, a dust storm in Vegas whips up and heads toward a new high-tech hotel with a shark theme with a 20-story shark tank built in the very front.

You can see where this is heading.

Look, there isn’t much plot here and no good can come from me repeating the phrase “they run near, shoot at, then run away from the Sharknado” every single paragraph. The truth of the matter is that this is a movie franchise which insults its audience by just repeating the same scene over and over while inserting arbitrary natural elements into each Sharknado just so a member of the cast or Al Roker (only here because SyFy and NBC share the same bed) can yell “It’s now a COWnado!!!” It, literally, gives you every type of “nado” until you’ve rolled your eyes so far back in your head, you might actually travel back in time to when this movie was fun.

It’s also a movie where one of the actual members of the Chippendales fights off a shark with a pelvic thrust. 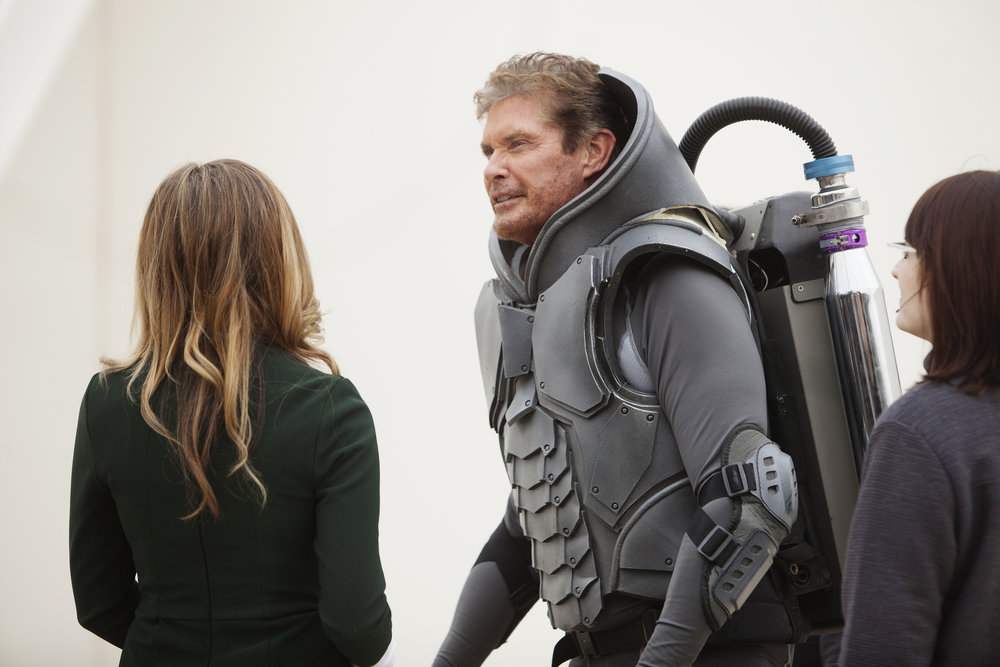 The movie’s title is a play on “The Force Awakens” and only seems to exist for the sake of amusing the Internet geeks it’s playing to. For a movie to include such a title is ballsy, and perhaps I expected too much from this series, but I thought there’d be more in common with the Star Wars franchise aside from the cheap laughs the movie goes for instead. Everything having to do with that series totals in less than a minute of fan service.

For example, a character has had some modifications done to their body. On top of having super-duper strength, they also have machinery and stabbing weapons grafted inside their arms. One of the weapons? It’s called “The Force”. To be honest, it’s a Lightsaber. Except it’s a terrible looking Lightsaber. I know the flick didn’t have a huge budget, but I’ve seen fan films made with no money which include better Lightsaber effects.

This doesn’t stop this character from looking smug while saying, “May the Force be with you…”

Some favorites return such as David Hasselhoff as Fin’s father, Gil, and Gary Busey joins the cast as a crazy scientist who’s in league with him but, ultimately, even Busey is wasted. Can you believe that? Nobody can out-crazy-stupid Gary Busey, yet Sharknado 4 manages to out-crazy-stupid Gary Busey. The mere possibility of this may cause an unnatural chain reaction which could create a Buseynado…wait. Don’t. Just don’t. Don’t get any ideas.

All of this comes together into a climatic battle near Niagra Falls that attempts to top the first couple of movies in the most insanely awful manner and which cheaply sets up for a sequel deriving from a completely unnecessary and out-of-left-field “plot twist” which makes no sense to anyone except maybe to the screenwriters who seemed to toss it in at the last second so SyFy would throw more money at them to make another tired sequel.

The big problem with “Sharknado 4” is that the initial novelty has long since worn off. The idea behind this franchise was ludicrous enough, but had that mysterious street credit once assumed by films like “Snakes on a Plane”. The first film was a true original that was actually fun to watch because it felt like the filmmakers were being as genuine and honest as they could. As the series has twisted on, however, the product placement, gratuitous cameos, cringe-inducing dialogue, and repetitive, monotonous action have taken precedence over any “quality” the franchise might have had and we’ve been given us a movie that’s not only incredibly dumb even by its own standards, but also too stupid for the audience it’s geared toward.