‘Scream’ review: A party at ‘The Orphanage’

Emma knows the truth about Audrey’s link to Piper and both girls are a big, bad mess on “The Orphanage”, the ninth episode of the second season of MTV’s Scream. Most of the episode surrounds this reveal and deals with the fallout.

The episode gives us a cute little fake-out involving Emma stabbing her friends after the swarm her in the kitchen, concerned about her well-being. Noah dies, Audrey dies, Keiran dies — only to have Emma’s mom (who, I swear, lives in the fucking kitchen cabinets when she’s not hanging out with the Sheriff) wake her from a murderous sleep-walking binge. It’s even weirder when Ms. Lang awakens from sleep only to scream bloody murder when she sees Emma hovering over her bedside. What does it all mean? If I’m reading the intentions of the showrunners correctly, we’re to think that Emma’s behind everything and her “murderous” side is under several deep layers of psychosis, hence the weird sleepwalking murder thing and the dreams she’s had. Is anyone else tired of the constant use of “it was all a dream” on this show? I know I am.

Little by little, small little truths come to light on all sides.

Emma and Keiran are lead on a merry chase when The Killer leaves a mini audio cassette (I didn’t know people still used those things but only Noah’s allowed to be tech-savvy on this show, so we’re going with it) hanging in Emma’s locker by a lock of what’s presumably her hair. They even leave a message written in lipstick which reads, “PLAY ME” just in case Emma had no idea if she was supposed to eat the cassette or wear it around her neck. It’s times like these when the show just fails to be creepy. Anyhow, the contents of the tape reveal that Ms. Lang doesn’t exactly trust Emma and thinks that she’s partially insane.

She may not be far off because she shoves Audrey against the school lockers in a fit of anger after Audrey attempts to extend an olive branch. The scene, for what it is, is well-executed despite the fact that Willa Fitzgerald is so stiff, that she can barely convey the emotions necessary for the audience to believe she’s actually pissed off — but Bex Taylor-Klaus saves the day once again by selling Emma’s rage with a reaction which is equal parts hurt and fear. Her portrayal of Audrey has long been the best thing on this show and this episode is no exception. 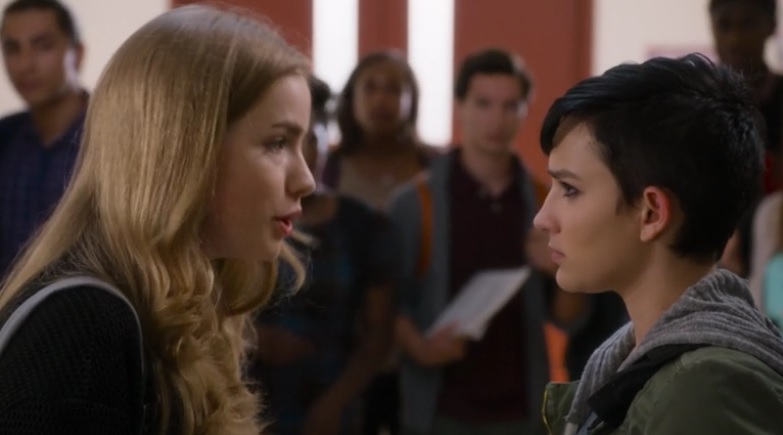 Cornered and pacing, she tries to think of each and every way the dreaded audio file got into Emma’s hands which, of course, leads to the telegraphed feud between her and Zoe which, inexplicably, leads to the moment everyone’s been waiting for (or dreading, depending on who you are): Noah getting laid. The sex scene is, ironically, the steamiest the show has ever gotten (and amusing, to boot; Noah credits “Phantasm II” for his sexual prowess and accidentally tears down his “The Virgin Stabbing” poster while Zoe goes “down south”), and it’s nice to see Noah happy outside his usual bubble, even if it’s with a character who probably isn’t long for the show. That’s also frustrating: the only reason Noah turned his back on Audrey was because he wants to get into Zoe’s pants.

Stavo and Brooke are also a thing, now. Last episode, they were sleeping together, fully-clothed. But, now, they had sex because their clothes are off. — but ‘Stavo is still acting creepy, stealing Brooke’s lipstick (the same applied to Emma’s locker note) and basically keeping a good distance from his father, the Sheriff. Stavo also manages to get his hands on the Lakewood investigative file on Jake and the murders. How does he do this? He walks right in. This is the second time, this series, Jake has managed to sneak right into the Lakewood PD, undetected, and been able to nab secure information. The supply closet at my former place of employment had better security than this place.

Stavo finds a couple of interesting things here: first, his Dad has been keeping a file on him and second, he finds evidence that Brooke’s shady Dad is corrupt and had monetary dealings with Jake leading up to his death, something Brook absolutely skewers him for after Stavo reveals it to her. We also find out that Stavo’s some demons he can’t get rid of: he once killed one of his friends by pure accident when they were younger. It’s scarred him for life and also made him embrace the darker things in life. It may be nine episodes into a twelve-episode run, but it’s nice to see Stavo finally get colored in. 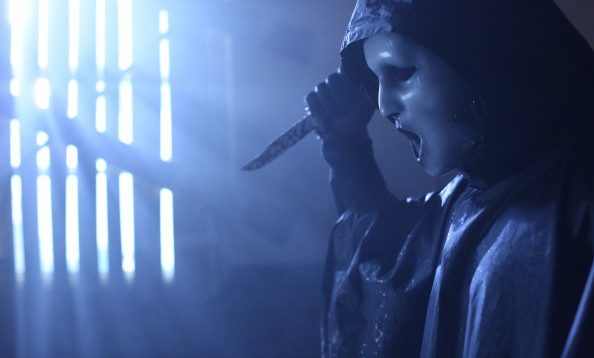 Two reveals this episode: the first is that Ms. Lang knew Piper. We discover this when Emma and Keiran boost her house keys and then not-quite-break-in to her place. Numerous photos of Piper are strewn all over the walls. What this means is…nobody really knows. Since Lang’s in the hospital and was attacked by The Killer, that means she can’t be The Killer, so giving us this reveal after she was attacked doesn’t make any sense at all. The other reveal is that The Killer has been bugging Noah’s room with audio equipment — which, basically, means that Zoe didn’t send the audio file of Audrey’s confession to Emma. The Killer sent it because he/she recorded it. Of course the question of how that device ended up in Noah’s room remains.

And that leads us to the climax of the whole thing: the rave bit. It turns out Piper spent some time in an orphanage. And the Killer wants us the characters to totally get that, so they set up a rave in the abandoned orphanage/asylum/school/whatever and invite the entire teenage population of Lakewood to it. Of course, Audrey, Emma, Keiran, Noah and Zoe all show up despite, yet, another moment where Noah’s like, “OMG This is like that one obscure flick where a bunch of people show up at a place because the Killer tells them to show up and somebody loses their intestines or gets their head cut off and blah blah blah” and nobody cares and the characters all march off to their deaths. It turns out the rave was thrown by Haley’s newest boyfriend. 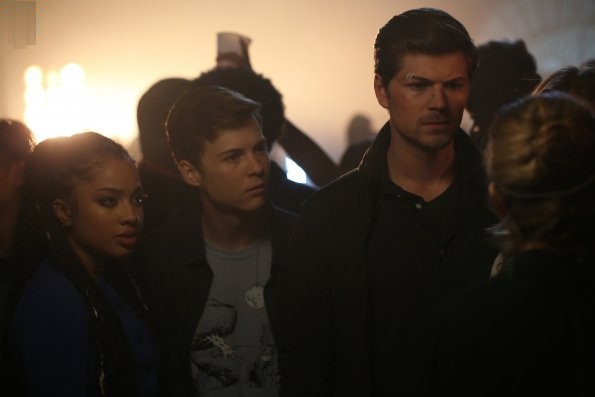 Who is this person? No idea. Who’s Haley? She’s that one girl I’ve mentioned a couple times. Remember? No? Yeah. That’s how awesome she is. She bites it, so the showrunners didn’t give a shit about her, either. Her own “boyfriend” kills her after we get a tease, from the killer, that Noah’s gonna die because he’s “no longer a virgin”, GET IT??? It’s worth (duly) noting that Haley offers The Killer a blowjob before he knifes her. To be fair, she has no idea her boyfriend is The Killer. Even still, it’s bad enough we have throwaway female characters, it’s worse when they’re basically treated like meat on the way out. So, yay. Haley’s dead.

Scream was granted twelve episodes instead of last year’s ten, meaning we have three more episodes to endure. With writing and production quality this low, there was no reason for the extra set of episodes outside of greed. With an overall story arc as thin as the one we’re seeing, the show feels like a visitor that’s overstayed its welcome.

@theworkprint
Follow
Previous article
The ‘Gilmore Girls’ Trailer Sends Me Into A Coffee-Induced Frenzy Of Excitement
Next article
‘Sharknado: The 4th Awakens’ Review: The Kitchen Sinknado