In this week’s episode of The Shannara Chronicles, Allanon is in the clutches of the nefarious General Riga with Wil, Eretria, Mareth, and Jax attempting to rescue him. In Leah, Lyria becomes privy to part of her mother’s plan and we discover just how devious Queen Tamlin is. 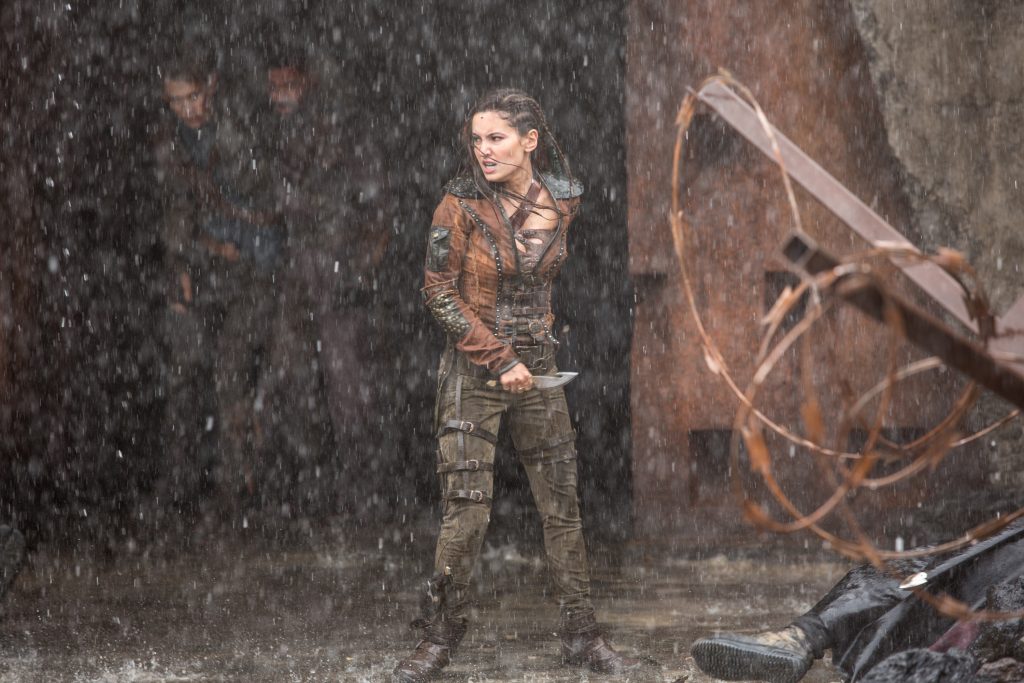 We pick up with Eretria finding Wil inside the barn near Shady Vale and Mareth encountering Jax outside. Looks like the ex-rover paid the mercenary with the bag of diamonds she got from Queen Tamlin to help her track the halfling. Wil is relieved to see a familiar face while she tells him that Amberle sent her. In return he catches her up on what’s happened to him and that he needs to save his uncle (who had been taken by dark Bandon). To do that he needs Allanon whom he discovers has been captured by the Crimson and taken to Graymark.

Jax appears to be the only one to know where the Crimson’s stronghold is but he has no desire to take the group there because obviously it’s dangerous and he doesn’t do causes. The trio manages to bait him though, appealing to his pride because obviously he’s not a chicken. Reluctantly Jax caves in and they go off to rescue the druid. 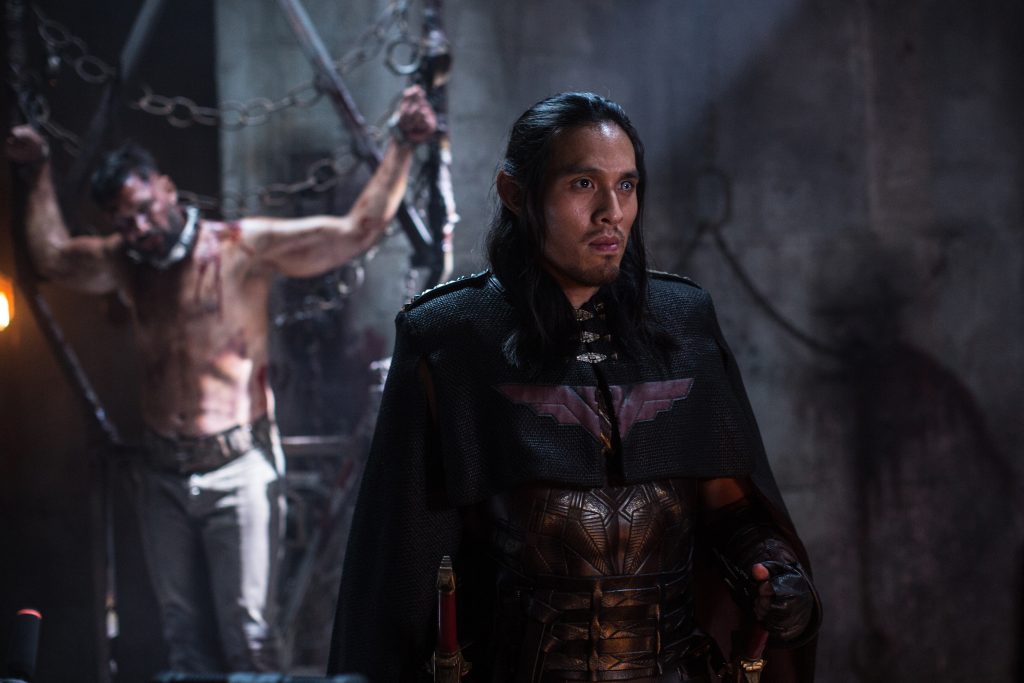 General Riga is impervious to magic himself

Meanwhile inside Graymark, Allanon is being tortured into revealing the location of the Druid’s Codex, a book that contains all their magical knowledge. He doesn’t reveal anything of course and tries to convince the elven general that the real enemy is the Warlock Lord who will be returning to their world soon. The conversation between the two is quite interesting because we get a better understanding of Riga’s point of view. The elf respects magic, however believes that it cannot be controlled. He also appears to be collecting all sorts of magical items but is he really going to be throwing those away? They are currently locked inside his chambers. The general tells Allanon that he plans to rid the Four Lands of all magic and it will be men like him that will stop the Warlock Lord. We even get a backstory that Riga’s mother was attacked when he was still in her womb and he became infected as a result. Interestingly enough it was this infection that allowed him to be impervious to magic. He was also a sickly child who managed to overcome his weaknesses and rise in the elven army. This shows us an individual who has worked hard for everything he has and did not get handouts in life. While he knows Allanon won’t talk, he is also confident that Wil will eventually come to rescue the druid and then he’ll torture the half-elf as another means of persuasion. 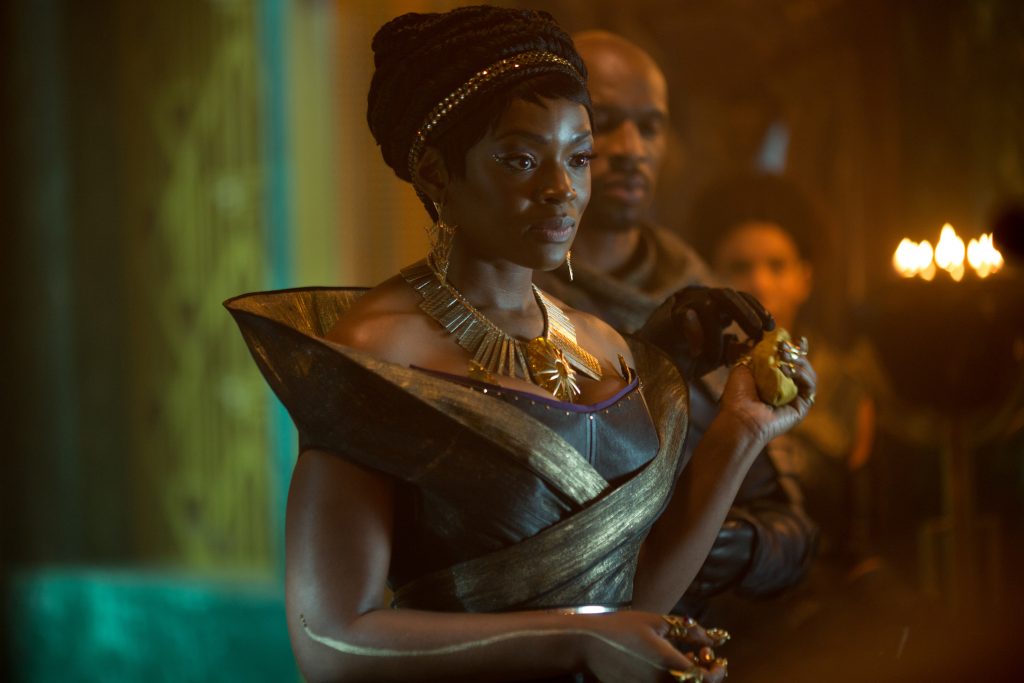 Meanwhile back at Leah, Lyria confronts her mother about her marriage to Ander and demands to know what’s really going on. Queen Tamlin acquiesces and tells her daughter that the elves are on the brink of civil war and that Lyria then will ask her husband to seek aid from her mother once they are back at Arborlon. Once the army of Leah crushes the uprising she will then request that a permanent garrison be set up in the city to keep the peace, thus allowing her mother to take the territory without any resistance. How fiendishly clever! The queen is essentially playing both elven sides. Later on she tells Edain in private that she needs to meet with General Riga stat. If all goes according her plans, she comes out on top with all the elves losing. 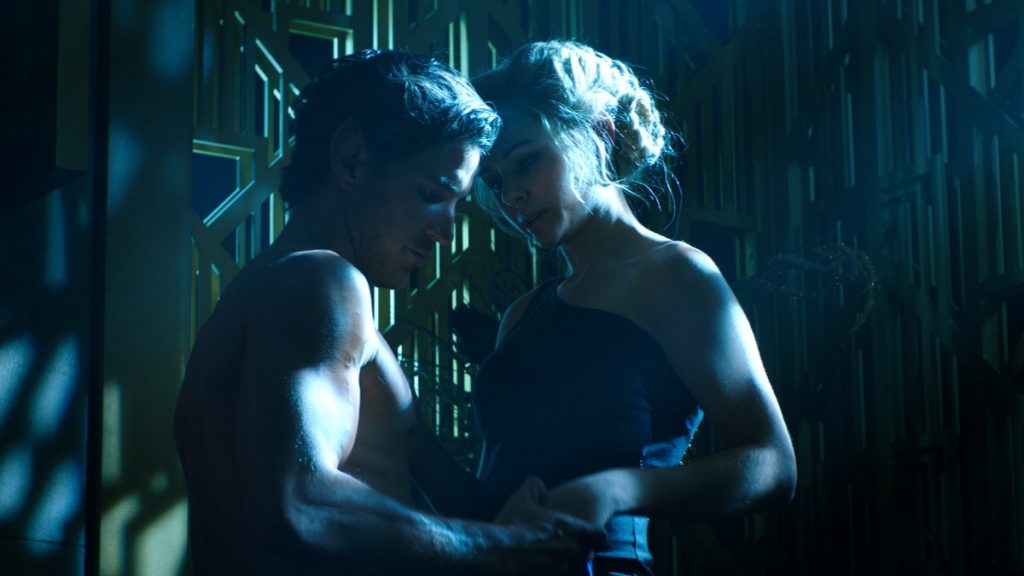 Edain you lying killer! Naturally King Ander has noticed that his lady love is missing, but his second-in-command says that the handmaiden returned to Arborlon because she was having a hard time with his impending marriage. He claimed that Catania didn’t want to be there as a reminder to their king. Ander then tells Queen Tamlin that he accepts her proposal and will marry Lyria to form a true alliance. 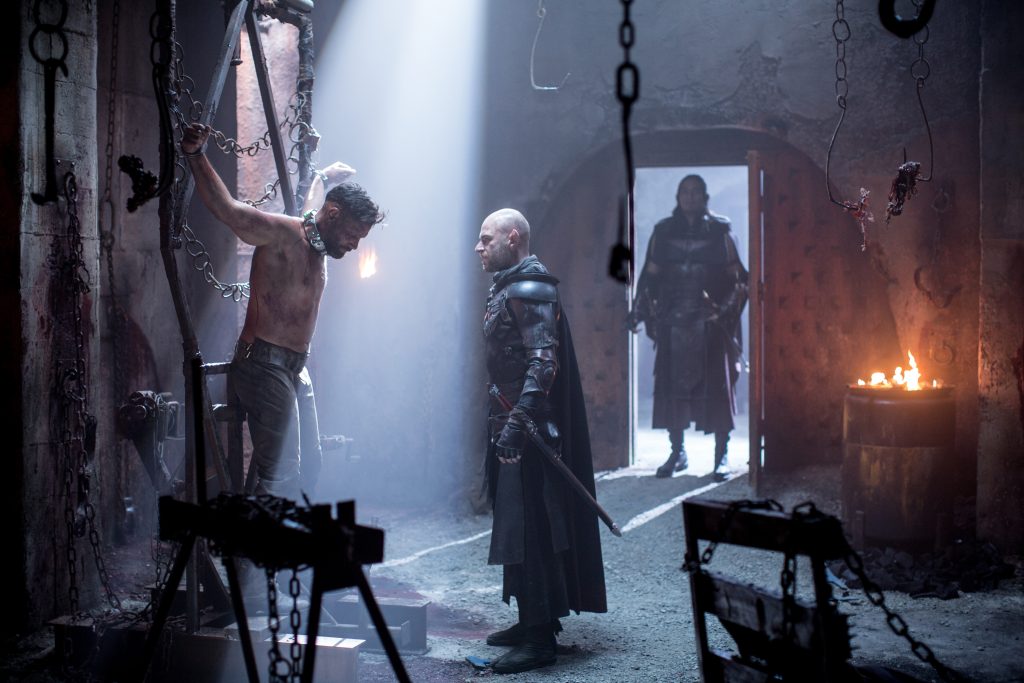 The group’s initial plan was to have Jax take Wil into Graymark his prisoner in order to collect the bounty on the half-elf’s head. Once he is put inside a cell, Wil uses a lock pick to get out of his chains and then a small mixture Eretria gave him earlier to blow the lock from his door. He manages to locate Allanon and starts to free him much to the druid’s surprise. The elder man tells Wil that he shouldn’t have come, to which he remarks that he is doing this to save Uncle Flick. The tension is still very much there as he isn’t ready to forgive Allanon for Amberle’s new life as the Ellcrys. Riga and his minions enter the prison cell suddenly and both are shackled up again. The elven general then sticks a long tube down Wil’s neck and begins to drain him of blood hoping to loosen Allanon’s lips. Mr. Ohmsford still pissed off says that Riga can kill him but the druid won’t say anything because he doesn’t care about anyone. Ouch. The general switches tactic and tries to convince Wil to tell him where the codex is to get back at Allanon but he’d rather just die. 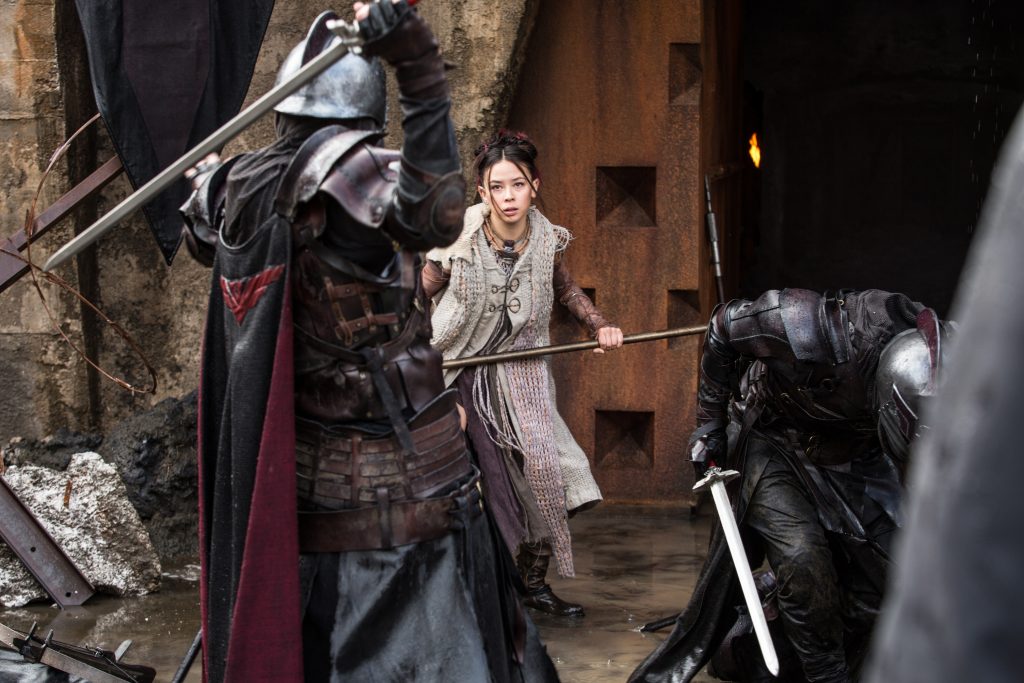 The women save the day naturally

Outside, Mareth and Eretria attack two Crimson guards who are standing in front of a small sewage tunnel that leads into their stronghold. They are saved by Jax who stabs one of the elves with his axe. They are surprised to see him there since the planned seemed to be that he would be inside with Wil. Earlier, he had wanted General Riga to pay more for the elfstones but was convinced otherwise. We learned that Jax had once been the only survivor of a demon attack and that he is still suffering from PTSD. Annoyed that he was bullied by the Crimson, he is in on helping rescue Allanon. The trio make their way inside where Mareth suddenly claims that she can feel the druid’s magic. She leads them to Riga’s room which is empty and naturally the other two are confused. But she tells them to just hold up and let her concentrate on where the magic is coming from. Voila, Allanon’s staff breaks out of the locker and comes into her hand. The druid himself senses something but doesn’t know what it is.

Just as Riga has his man drain Wil of all of his blood, Mareth breaks the door down with magic! She then uses the staff to push Riga’s minion against the wall and then cleverly flings a bowl of fire at the general because he isn’t impervious to that. Soon after Eretria and Jax follow inside to free Allanon and Wil. The druid needless to say is super confused because how can someone else be using his beloved staff? That shouldn’t be possible! Oh dude, when you find out why your life will be irrevocably altered. I can’t wait for that.

Mareth then uses her own magic to make a fake Riga, ordering his men to look for the escaped prisoners in the tunnels. Some minions stay behind though and they are attacked by the gang. Still there are more Crimson coming and so Allanon uses the staff to try and open the gates. Mareth creates a wall of fire to hold back the elves and hopefully buy them some time. Luckily, they all manage to make to just make it through the gate relatively unscathed. 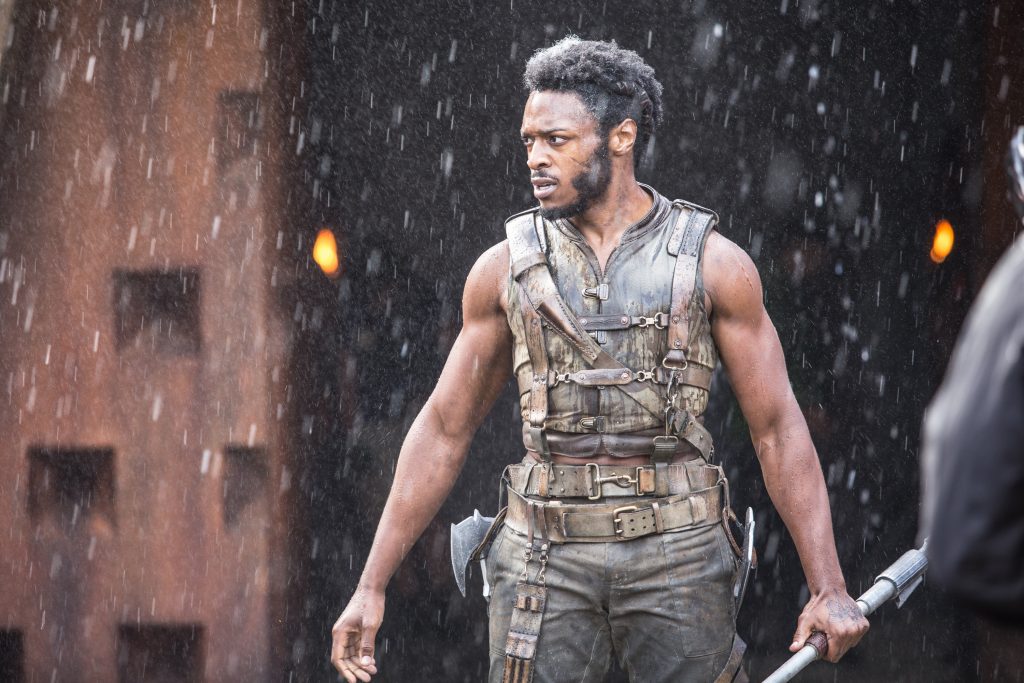 The highlight of this episode for me was learning more on the backstories of General Riga and Jax. As new villainous elements on the show this season it was great to see that they are complex characters shaped by certain experiences into the individuals that they are now. Also it seems like Queen Tamlin actually has Jax tagging along in order to watch Eretria and what’s going on with their group and then report back to her majesty. Mareth definitely got a sense of that as she caught the mercenary eavesdropping on Wil and the ex-rover.

Speaking of which, Wil and Eretria’s reunion was a little awkward at first but perhaps she will be able to help him move on from Amberle and stop using the elfstones to see his memory of the elven princess. She noticed that it was affecting him and while he initially brushed her off, he eventually admitted it. The first step to recovery is admitting you have a problem right? But they can stay in platonic territory for now, I am on the Lyria/Eretria ship. Is Wil suffering from some kind of magic poisoning? Well for now they left the elfstones at Graymark so he can’t use those for awhile but the season 2 promo trailer did show us that he will find the Sword of Shannara at some point.

The sword it is a magical weapon forged by the smith Uprox Screl and infused with magic by the druid Bremen (Allanon’s mentor). It was then given to Wil’s ancestor the elven king Jerle Shannara to use against the Warlock Lord in the Second War of the Races. However it seems that he wasn’t able to wield the sword fully and Brona (aka the Warlock Lord) was able to escape. The blade was then slid into a block and taken to Paranor. Later on Wil’s father Shea used it to finally defeat the evil druid. Looking forward to seeing it in action this season!