On The Shannara Chronicles this week, Team Magic is on a side trip to recover a powerful weapon, while Eretria and Jax return to Leah to warn King Ander about a certain queen’s Crimson related activities. Meanwhile Ander and Lyria spend some quality time together and get real.

As the return of the Warlock Lord draws closer to reality, here are the eight must know moments from season 2 episode 4, Dweller. 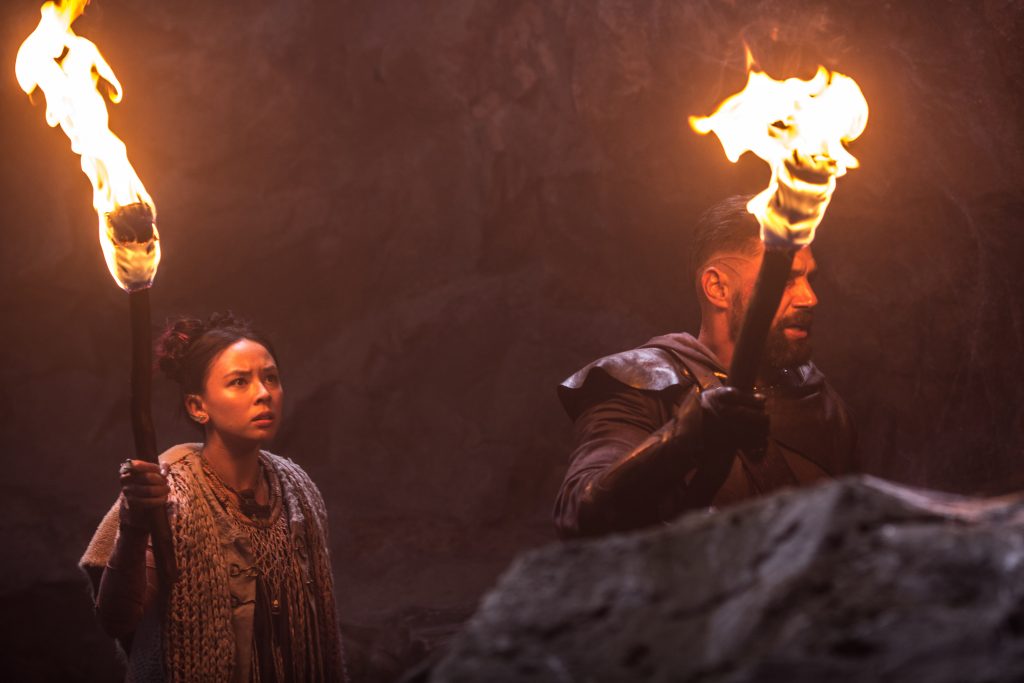 Allanon is the worst dad ever

Back at Storlock (where Wil was aided by the gnomes), Allanon is convinced that he can’t be Mareth’s dad because he was told that the druid’s sleep prevented him from having children. Wil asks him to consider that maybe he had bad information. The guy really shouldn’t rely on magic  as a contraceptive. The druid you should know better! There could be tons of little druids around the Four Lands thanks to the “druid’s sleep.” Poor Mareth though has to deal with the rejection and puts on a brave face claiming that she doesn’t want a dad, just a teacher to help her control her growing powers. 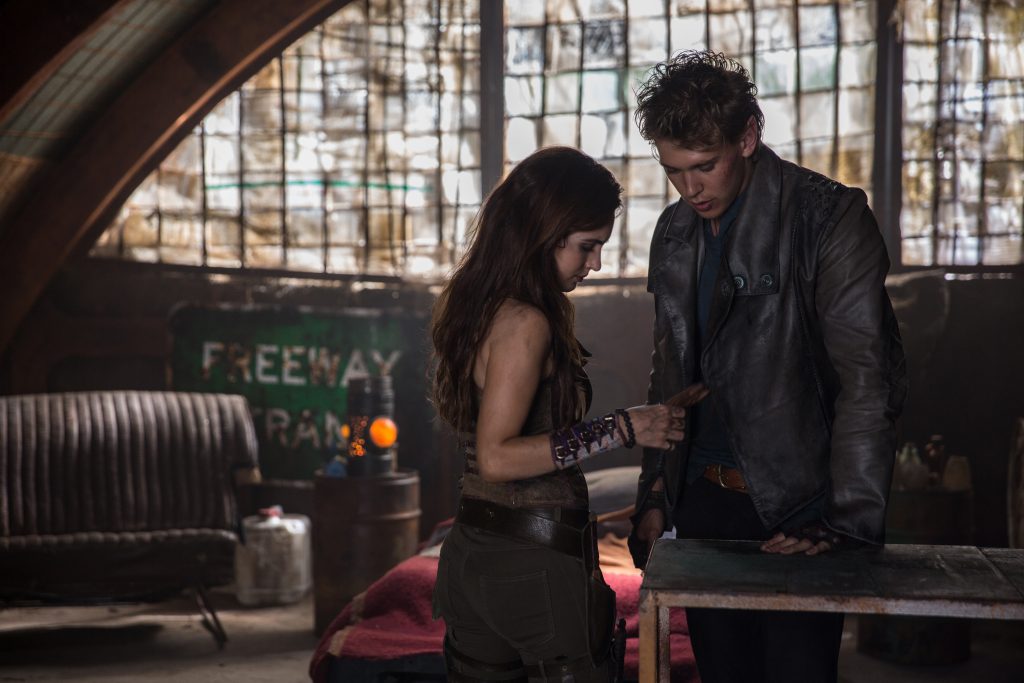 Will gets the elfstones back

Wil being reunited with the eflstones is all thanks to Eretria who found it at Graymark. You’re welcome. It’s super obvious that the ex-rover doesn’t want to leave him again but he tells her that it’s too dangerous for her to go to Paranor with them and that they will see each other again. From his perspective that makes sense since he doesn’t care about Allanon’s safety right now apart from needing him to get Flick back and he doesn’t really know Mareth so both their lives are expendable. Eretria however actually matters to him and so he wants her away from danger as much as possible. 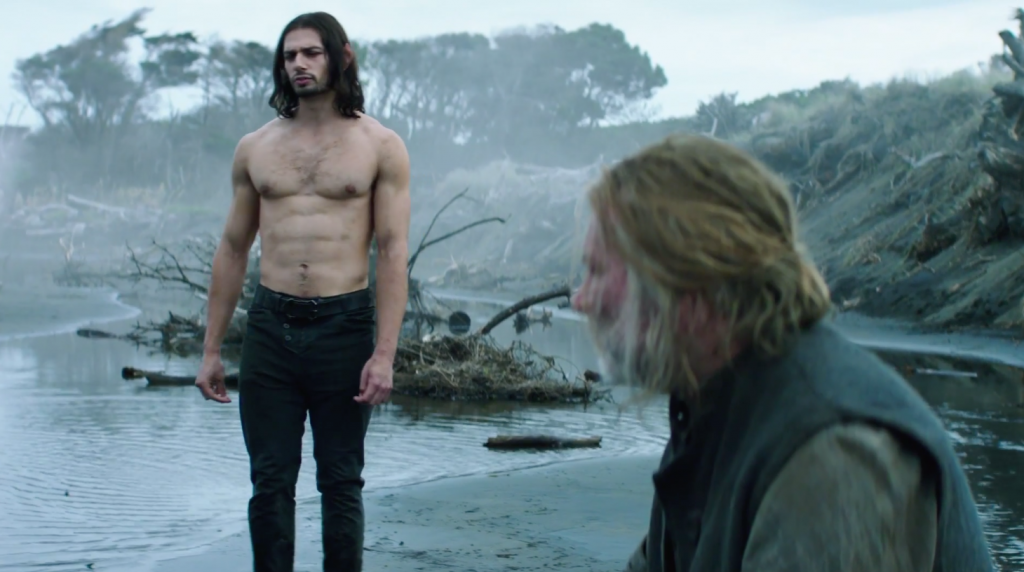 While preparing for a spell of sorts, Bandon goes shirtless while an uncomfortable Flick is trying to remain calm. I may have gasped out loud when this scene happened. The older man tries to convince the magic user that he cannot trust the Warlock Lord. Bandon responds back that the world doesn’t take care about people like him and to prove his point, he and Flick ask a nearby farmer if they could spend the night there claiming to be on their way to Arborlon. The farmer agrees saying that he’s happy to help a fellow elf out. During dinner the Warlock Lord’s servant asks the man and his wife about their life and how they came upon the property. As their hosts chat the conversation moves to magic and how they despise anyone who practices it, believing that it is the cause of all problems in the Four Lands. To make matters worse, the couple’s young son brings in a mask that was used to chain the son of the former occupants of the house. Of course it turns out to be Bandon’s old mask because this used to be his house. Using his abilities he flings back the farmer and his wife, forces the kid to wear the mask and then kills the young boy in front of his parents. Yikes. He’s proven his point to Flick that most people wouldn’t hesitate to do the same to him just because of his gifts. 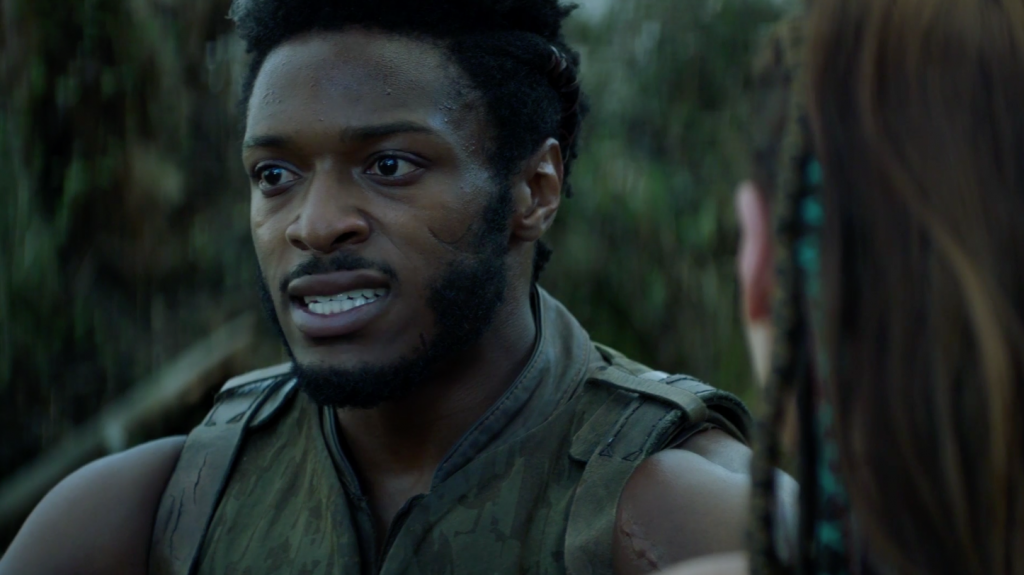 Jax and Eretria have a bonding moment

Allanon sends Eretria back to Leah in order to warn King Ander of the queen’s possible duplicity. Jax had earlier told the druid that the swords the Crimson possessed could only be made by the sorcerers of Leah. While she’d rather go to Paranor to be with Wil and to avoid seeing her ex-girlfriend Princess Lyria, she reluctantly agrees and the with mercenary accompanying her. While camping out, Eretria asks him about the tattoos on his knuckles and if he was a member of the Border Legion. Surprisingly he opens up and essentially confirms it. Jax tells the story of how he and his highly trained men encountered demons during a routine scouting mission and we are led to assume that no one else survived but him. 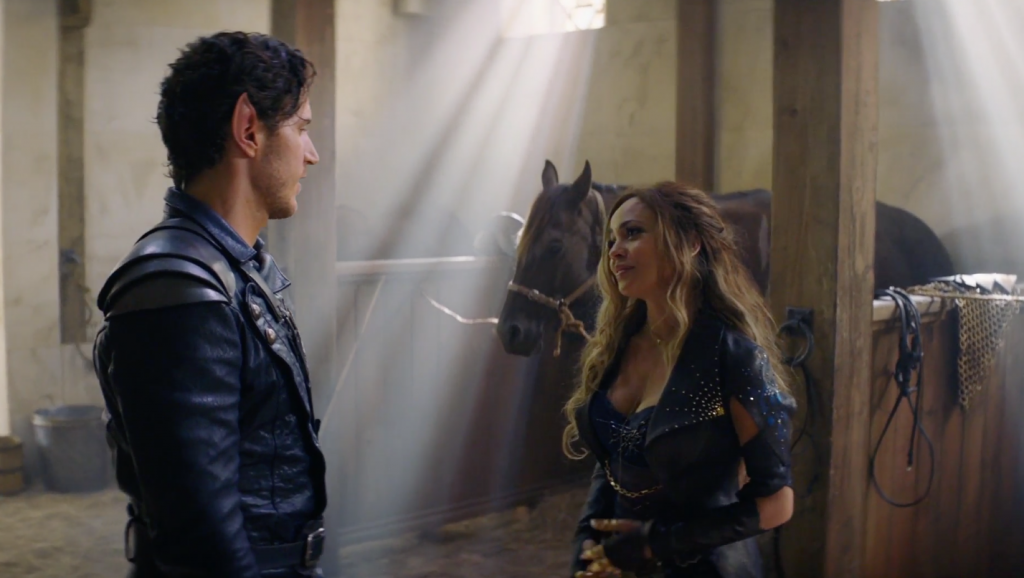 Lyria and Ander get acquainted

Lyria explains her love for Eretria to the elven king, which is a good move on her part. Unfortunately though he also finds himself in a bind because he needs Queen Tamlin’s support. Am I the only who thinks that if Lyria took the throne from her mother then she could do whatever she want and help the elves without all these strings attached? Eretria and Jax just happen to arrive in Leah to overhear this conversation between the two royals. Jax hands over the Crimson blade to Ander and explains how it came from here, while Eretria says that the elven group also kidnapped Allanon in the stables. They had been waiting for the druid and she sent Catania to tell him. The elven king says that she never made it and that Edain told him she went back to Arborlon. The ex-rover rightfully states that the guy is lying and that he’s got to be the mole. Finally! 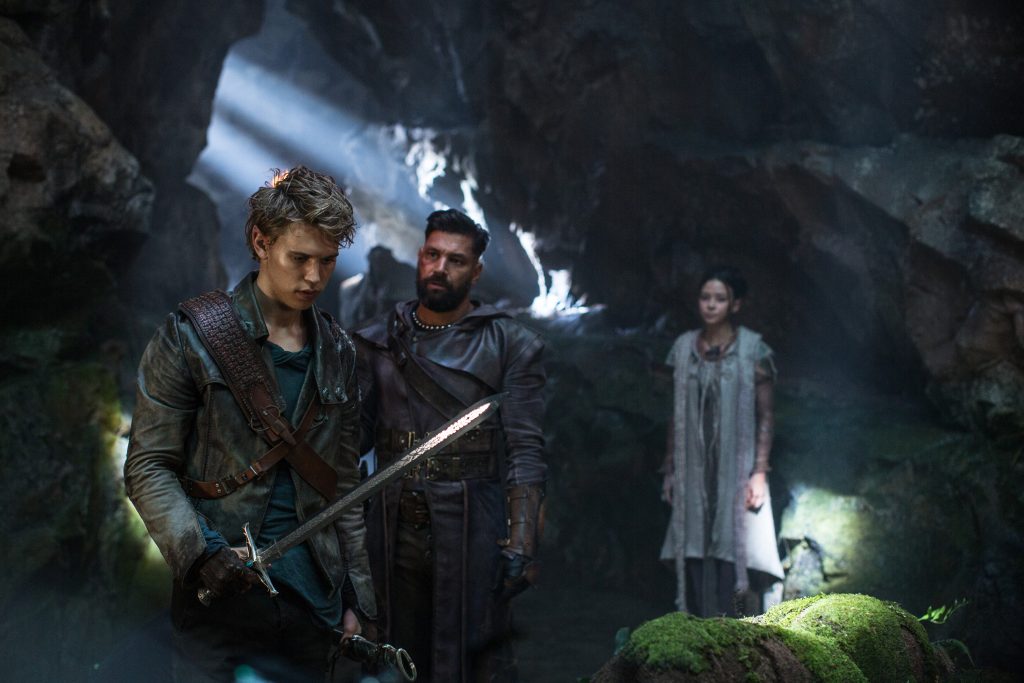 The Sword of Shannara found

Allanon takes Wil and Mareth on a side journey that pisses the halfling off understandably. He explains that to defeat the Warlock Lord, they need to recover the Sword of Shannara that is actually buried with Shea Ohmsford. They go to a hidden location through an underground cavernous labyrinth where the trio find themselves stalked by a creature called a dweller. It manages to capture Wil and takes him to it’s nest. There the poor guy goes through his worst trauma and while the creature feeds of his pain. Props to the special effects in this shot because that tentacle is nasty looking. As the beast begins to suck the life force from Wil, we see a much younger version of the halfling playing with his dad’s sword in the barn. Shea catches him and basically loses it, screams to never touch the blade and then starts whacking his kid with it in a mad rage. Soon though Mareth and and Allanon find the nest and the spider-like dweller is in defense mode. The druid almost gets his head bitten off when Wil is able to destroy it using the elfstones. They then make their way to Shea’s final resting place where Wil is able to say a final goodbye to his father, who left him and his mother when he was still a child. He finally understands his dad’s actions and got closure. Bonus: Wil claimed the Sword of Shannara which reacted to his touch. Now on to rescue Flick! 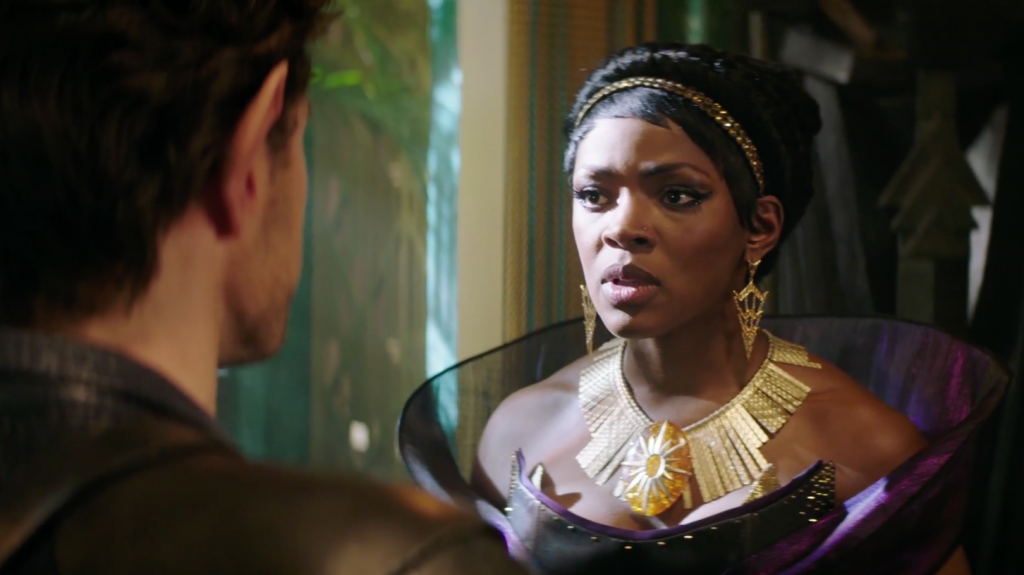 Queen Tamlin lies her ass off

When an enraged Ander confronts the queen after catching Edain red handed, she deftly turns the accusation back on him saying that he’s the one with a Crimson member in his party. She then switches her tactic to threatening him into calling off the wedding/alliance because she claimed to want her daughter most of all. He then comments though that would be great news for Lyria because she has no intentions of marrying him. He then aggressively asks Queen Tamlin if he can count on her support to crush the Crimson once and for all. Reluctantly she gives him her word, but that doesn’t really mean much at the moment does it? 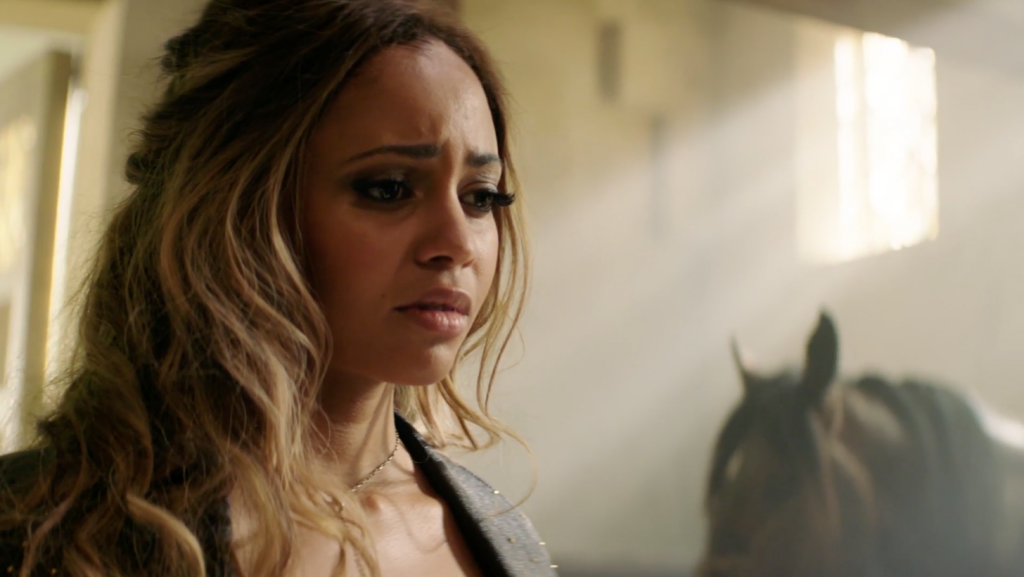 Lyria has her own demands

The princess goes to see Eretria before the other girl is off again and the two women share a tender kiss. The ex-rover tells Lyria that she has so much power because her mother needs her more than she needs her mom. Something clicks in her mind and she informs her highness that when she becomes queen herself, her support won’t be there. In turn an upset Queen Tamlin asks what she thinks she’s doing. Finally it seems that Lyria is learning how to play the game and is opening negotiations to get what she wants. The princess wants to be treated as an equal and for Eretria to be left alone. The kitten has claws of her own!

Really enjoying the Crimson storyline this season because it is incredibly applicable to events going on in the real world. Shannara Chronicles doesn’t shy away from the ugly side of life to depict bigotry and fanaticism. The scene when Bandon kills a child was particularly gruesome as well and not easy to watch. Speaking of which, it was fascinating to see him interact with the family because you can see how he’s lost compassion for people. He seems to give them a chance to prove him wrong but had they acted differently would he have left them in peace? I’m not sure. Still, it’s difficult to digest because both parties are in the wrong. The family for being bigoted and Bandon for murder.

While I’m still shipping Lyretria, it’ll be fun to see how Ander and Lyria work together in a political alliance. I suspect the two may get married only to achieve their own personal agendas.