‘Shadowhunters’: We Say Goodbye To Jocelyn

BooksFeaturesTVTV Special Features
January 31, 2017
By: Nicole C
SHADOWHUNTERS - "Day of Wrath" - No one is safe when the Shadowhunters come up against a new kind of demon in “Day of Wrath,” an all new episode of “Shadowhunters,” airing MONDAY, JANUARY 23 (8:00 – 9:00 PM EDT) on Freeform. (Freeform/ Ben Mark Holzberg) MAXIM ROY, ISAIAH MUSTAFA

In this week’s episode of Shadowhunters, we say our goodbye to Jocelyn, a devoted mother, loyal friend, and kick-ass nephilim. Played by the talented Maxim Roy, she was made of strong stuff having left the shadow world and gone into hiding as a mundane. While she’s made mistakes along the way, Jocelyn was always fiercely protective of those she loved and always fought for what was right.

Jocelyn Fray was born Jocelyn Fairchild and was the only daughter to Adele Nightshade and Granville Fairchild II. She had the fiery red hair that most Fairchild offspring had thank to their ancestor Henry Branwell (also Lydia’s ancestor). Jocelyn grew up in Idris and had been childhood friends with Lucian Greymark, whom we know better as Luke Garroway. 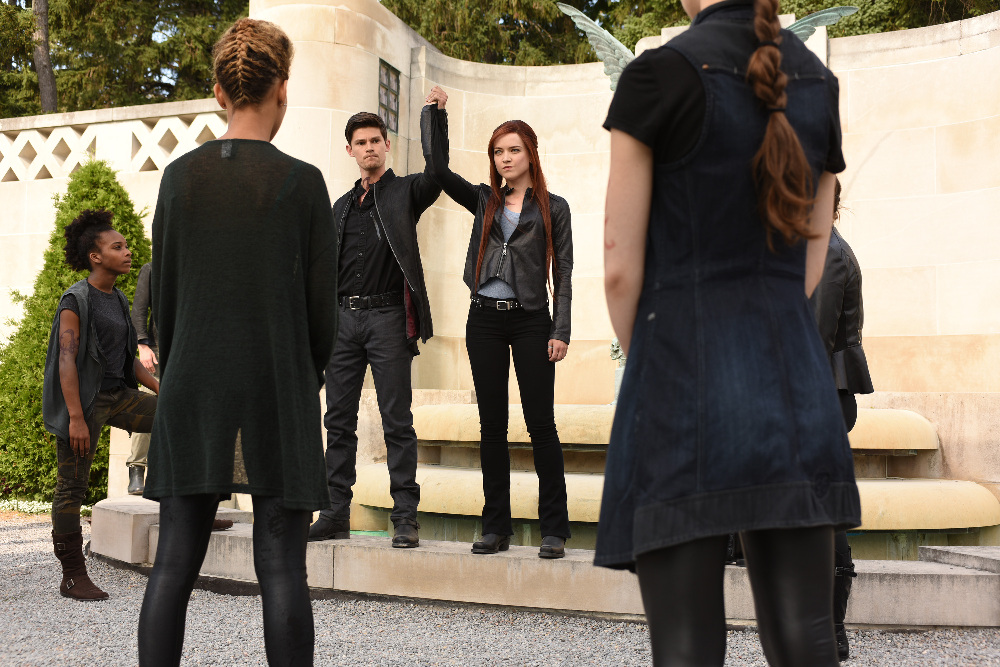 On the show, she’s had a tumultuous life from her younger days in Idris as a member of the Circle with Valentine, Hodge, Luke, Robert, and Maryse. Eventually she realized that her husband’s views on downworld was too extreme and she prevented him from getting the Mortal Cup, going on the run and hiding the cup and her unborn daughter from him. After the Uprising, Valentine had murdered Michael Wayland and his son, and assumed his identity, raising Jace (his son with Jocelyn) to be a Wayland to hide his identity.

In season 1, Jocelyn had been in hiding for a long time and on Clary’s 18th birthday she finally resolved to tell her daughter about the shadow world. But life decided to get crazy as two Circle members show up at her Brooklyn home after they followed Clary there from Pandemonium (they recognized her as Jocelyn). She has Dot create a portal that sends Clary to Luke’s precinct while she dealt with the rogue Shadowhunters. She ends up taking a potion that puts her into a coma so that Valentine can’t extract the location of the Mortal Cup from her. Her sleeping body is taken to a factory in Chernobyl were her husband has been hiding from the Clave.

Upon first meeting him, its obvious that Valentine still cares a great deal for his wife and so he’s happy that she’s returned. When one of the Circle members calls her a traitor, he sticks a needle into the Shadowhunter’s neck, causing the other man to start having seizures and foam in the mouth. Clary and Jace were able to retrieve Jocelyn’s body eventually through the crystal necklace that she had given to her daughter. 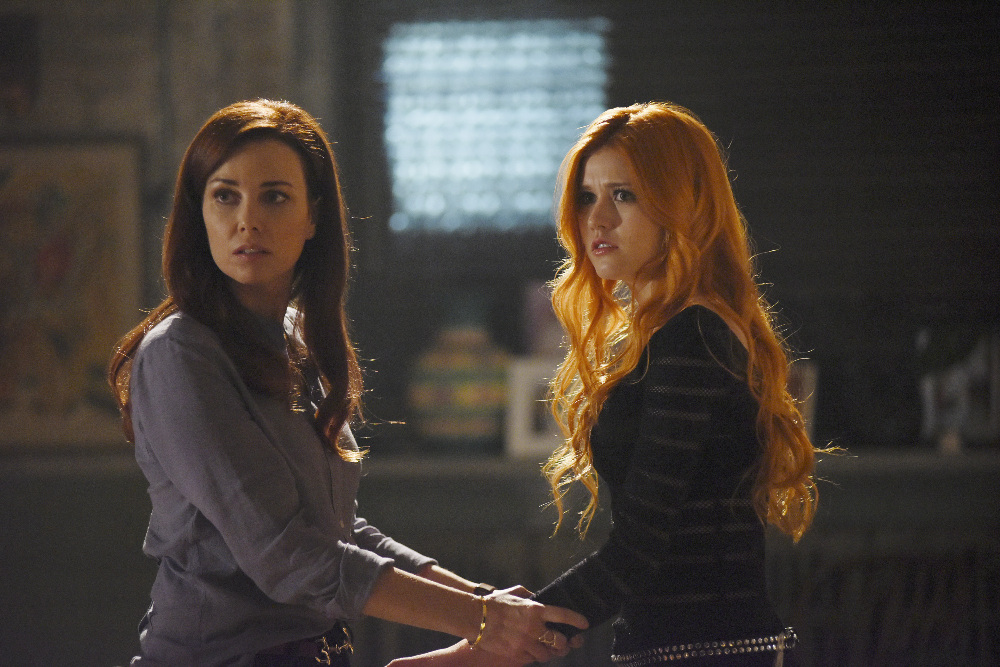 Clary also went to see the warlock Ragnor Fell, who had created the sleeping potion that put her in the comatose state. However, he was killed by a demon before he could reveal how to create the antidote to it. Their only clue was that the Book of the White was needed, which was in Camille’s possession. Clary and Simon had to break the vampire out of the Hotel DuMort and bring her to Magnus’ loft. She is only willing to give it up in exchange for her freedom.

They are able to retrieve the book at the cost of losing Jace to Valentine, but not all is lost as Magnus is able to brew the potion and Jocelyn is brought back. Things however haven’t been easy for the mother and daughter because old secrets resurface now that the shadow world knows that Valentine is back. Jocelyn finds out that her son Jonathan Christopher is alive and that he is now Jace. Knowing that her husband had experimented on Jace while he was  still in her womb, she initially tries to kill him. Infuriated, Clary confronts her mother and Jocelyn is forced to share a memory to show how Jonathan had black demon eyes as a baby and could kill make flowers decay at super speed.

Still, she tries to make some amends by helping Jace get away from Luke and Maia while he was being chased in the hospital. In her final hours, the Clave had ordered Jocelyn to relocate to Idris and she was going to follow because she was tired of running. She asks Clary to come with her but surely she knew that her daughter wasn’t ready to leave Jace or Simon behind. Unfortunately that would be their last conversation because a demon infiltrates the Institute and it possesses Alec’s body who then brutally kills her.

Clary is unable to accept her mother’s death and tries to bring her back through warlock Iris Rouse. As the spell is being cast, she finally realizes that it was wrong to do this and she backs out. Iris however had other plans for her. Clary is able to vanquish the demon that was supposed to impregnate her.

The time finally comes where she must let go of her mom. Clary attends the funeral service at the Institute along with Jace, Alec, Isabelle, Aldertree, and the other Shadowhunters. During the last rites, she is unable to fully utter her mother’s name so Jace does it for her, saying, “Jocelyn Fairchild.”

Jocelyn’s death is a big departure from the books and it’s got to have a huge impact not only on Clary and Luke, but on Valentine and Jace as well. She was a very pivotal character in The Mortal Instruments series and it will be interesting to see how storylines will change given that Jocelyn was an important part of some very big plotlines. Shadowhunters though has certainly gone a darker route with Clary now being an orphan since Valentine isn’t exactly the doting father she can count on. It’s also going to be fascinating to see how her passing impacts the men in her life. Luke is obviously consumed with grief at the moment and because of it he has been shifting into werewolf. How will Valentine react since it was his plan to have the demon infiltrate the Institute as a distraction to begin with? One could easily see him blaming the Clave though for driving her away from him and it led to this.

She was a fierce character who deeply loved those she cared about and fought to protect mundanes. You will be sorely missed Jocelyn and I for one will cling to the knowledge that at least in the books, she got her happy ending and married Luke. And who knows, by some crazy magic she’ll come back. 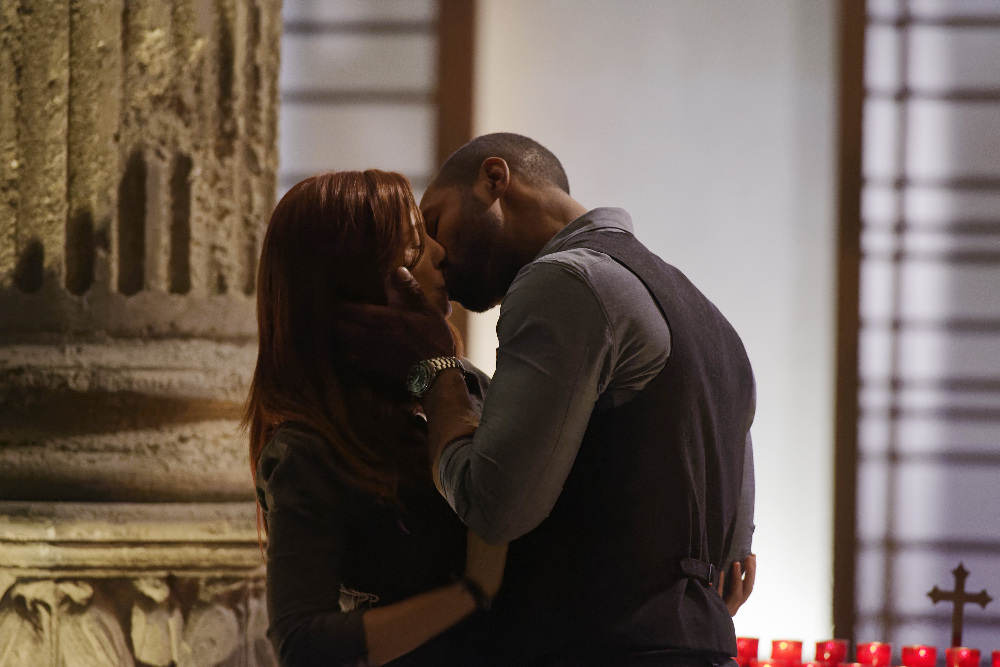 Previous article
‘Supergirl’ Review: “We Can Be Heroes” But Literally Just For One Day
Next article
‘The Magicians’ Review: Let’s Do Some Damn Battle Magic