In this week’s episode of Shadowhunters, Lilith gets her hands dirty, Clary summons an angel, Alec snoops through Magnus’s stuff, Izzy goes on a date, and Simon learns the truth about his new roomie. 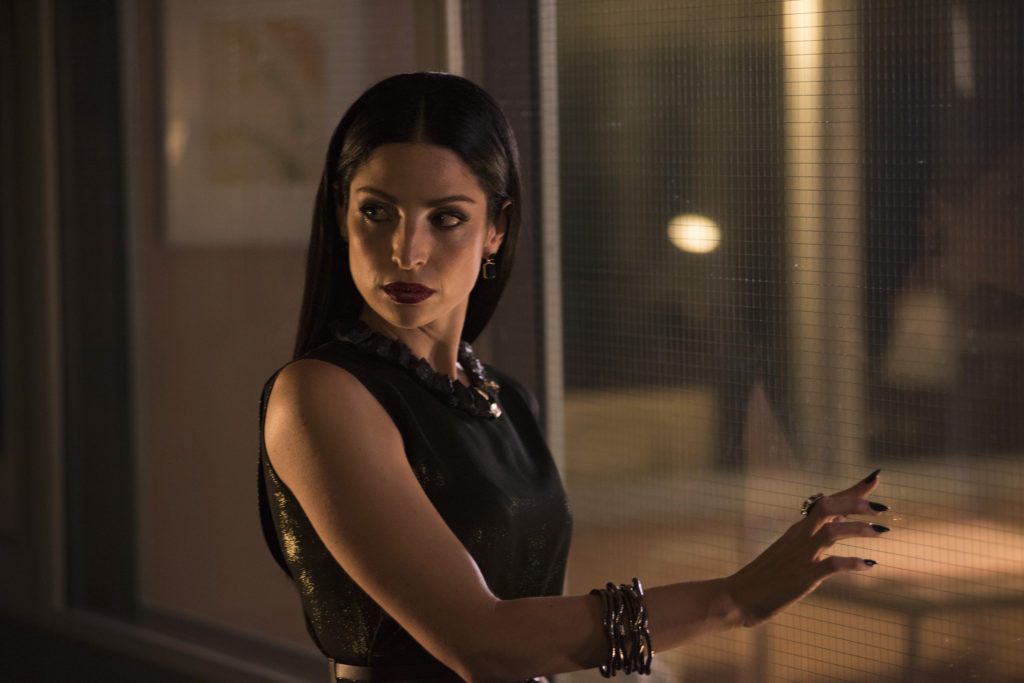 Posing as a fellow warlock, Lilith arrives at Magnus’s loft seeking his aid. She pretends that Ragnor Fell (who died in season 1) recommended him to her and that she wasn’t from around here. She explains that she needs something that can make an individual fall out of love as there is a soldier who is madly in love with her, but unable to focus on his duties (which worries her). Magnus recommends that dealing with heartbreak is always preferable to the alternative, although in this case it seems that she is doing the other person a kindness. He enchants a potion and instructs her to put in a sliver of her soul into the liquid an hour before she gives it to the intended recipient. Lilith looks surprised but quickly smiles, saying that she does know how to do an extraction.

Back at her place, she summons a tracker demon and tells the creature to find Clarissa Fairchild and to get a small portion of the Shadowhunter’s soul. 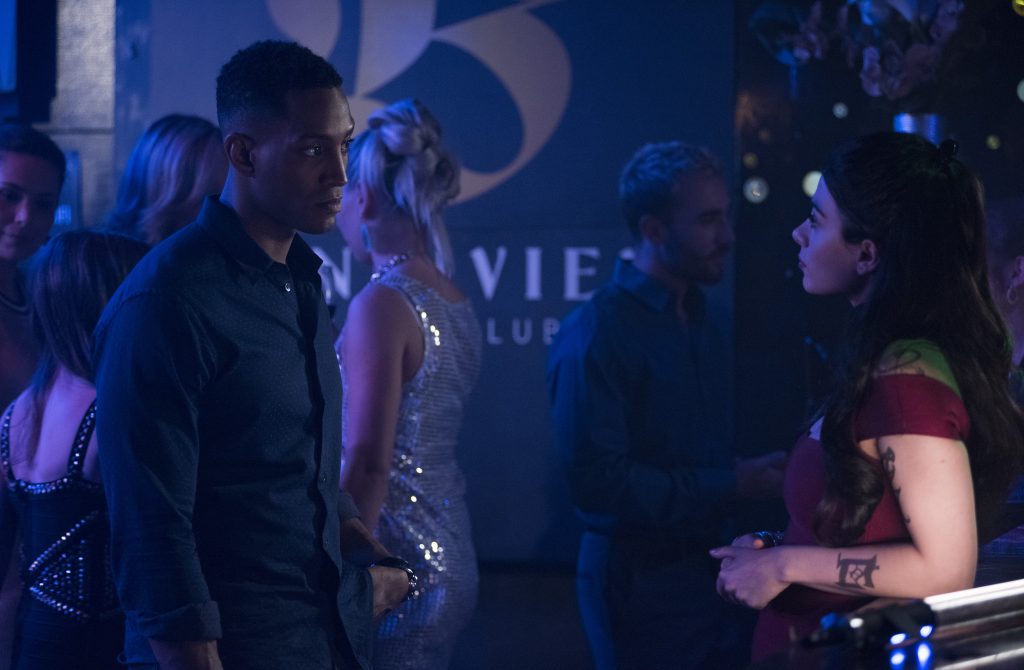 Isabelle Goes on a Date

Taking a night off, the new weapons master of the New York Institute finally goes out on a date with Dr. Charlie Cooper (whom she met at the hospital in the first episode of the season). They had ran into each other again at a party where Jace, Clary and herself were watching over Morgan (the human the Owl intended to abduct next). Izzy gave the persistent doctor her number just to get him off her back and it appears he’s been asking to hang out. Clary convinces the other Shadowhunter to take a few hours to enjoy herself.

On the date, Izzy is indeed having a great time. She leads him to believe that she makes jewelry for a living after Charlie compliments the bracelet she said she made. Unfortunately though, once they are outside the jewel pulses (it might be the same stone from her necklace that had been a Lightwood family heirloom) and it warns her that a demon is nearby. She makes a really lame excuse that has a big order to work on tonight and takes off. Isabelle goes into a dark alley nearby and transforms her snake bracelet into a staff. The tracker demon then appears because she had borrowed Clary’s dress and the creature thinks she’s the other woman. They battle and Izzy is able to defeat the demonic beast. Charlie then sees her in the alley and she’s not able to use her stele in time to put an iratze. He tells her that she needs to go to the hospital with him to get stitched up. She thanks him for patching her up and asks why he came after her even when she ditched him. The physician replies that he was just so worried after all the recent attacks that he had to make sure she was safe. Izzy kisses him on the cheek before departing. 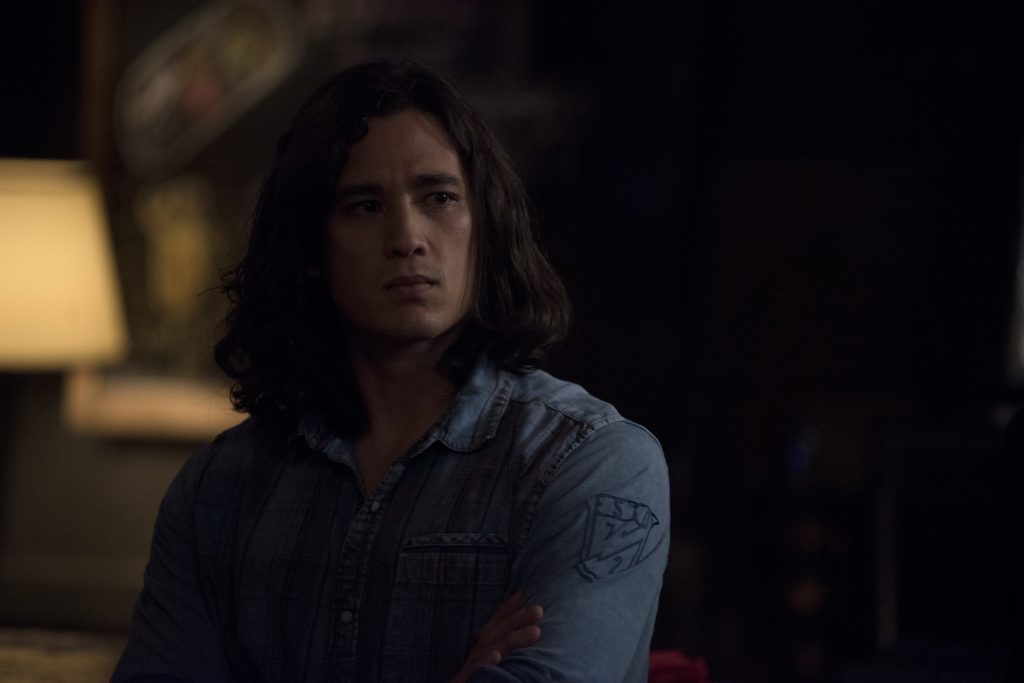 In this week’s episode, Simon gets super pissed because someone posing as his manager called the Hunter’s Moon to cancel his gig. He has no idea who could have possibly did it and runs into Jace day drinking at the bar. The Shadowhunter decides to help Simon out after the vampire explains some of his recent troubles (aka the Mark of Cain). Jace needs a distraction anyways as he’s been contemplating going to the Silent City to get help from the Silent Brothers.

He goes to the Jade Wolf and interviews members of Luke’s pack to see if they could be the one who called the Hunter’s Moon. However, the wolves don’t seem to be responsible for Simon’s cancelled performance and so he goes to the vampire’s new apartment. There he meets Kyle for the first time and gets a weird vibe from the get go. Simon’s roommate makes an excuse that he needs to head to buy some stuff at a bodega and leaves. Jace then asks Mr. Lewis how he and Kyle met and expresses that it’s a weird coincidence that he found this place so fast. He even breaks into the other man’s room and notices a specific plant that confirms his suspicions. Bad timing as Kyle returns and gets pissed that they are in his room. But the Shadowhunter pulls out his seraph blade forcing Kyle to reveal that he is a werewolf with the Praetor Lupus and that he’s been tasked to watch over Simon. Jace instantly backs off and shrugs that the guy is just doing his job. The vampire then angrily asks if it was Kyle who was pretending to be his manager. The werewolf admits to this saying that there will be other wolves there and if the Mark of Cain gets activated many could get hurt. We find out that the Praetor set up the apartment to Simon’s tastes so that they could more easily monitor him. Royally pissed, the young vamp says he’s moving out.

Simon ends up camping out in his van again where Jace finds him sometime later. The Shadowhunter convinces him to give Kyle another chance and that the situation is not that bad. Eventually Simon relents and goes back to Queens to get his keyboard. He tells a surprised Kyle that he’s going to play his gig and that he isn’t going to stop living his life. The vampire says he can come and watch over him there but it was his choice. 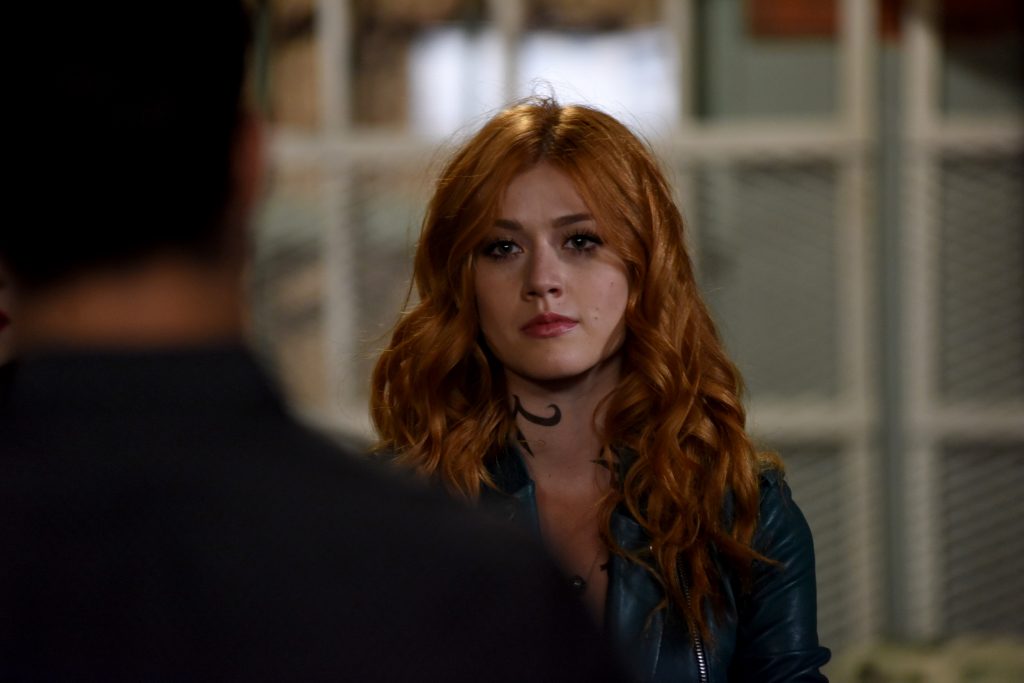 Earlier Jace tells Clary that he is considering going to the Silent City to seek treatment for his mental health issues. He tells her that his mother had also had a history and had suffered alone. Clary isn’t sure this is the right move however because if the Silent Brothers deem him unfit to serve then he’ll be de-runed. Jace understands the risks but would rather know that he’s tried everything at least to get help. She begs him to not do it yet and to let her try something else. Clary believes that the angel Ithuriel might be able to aid them since they both have his angelic blood in their veins.

She goes to Luke asking to see Cleophas. As a former Iron Sister, she would know how to summon an angel. He takes Clary to his farm upstate where Cleo has been hiding out. The elder female Shadowhunter tells the both of them that sadly the angels haven’t been responding to her, likely because she killed a fellow Iron Sister and is no longer worthy. Clary however is and she’ll tell her how to do the summoning.

The three head out to the woods where Cleo sprinkles a substance onto the ground that contains adamis into a circle and then bids Clary to step inside. Once in, she tells the younger Shadowhunter to activate her angelic rune and repeat after her. Ms. Fairchild recites the words and the ring around her suddenly turns bright yellow. Cleo explains that the angel has heard her call and that she Luke need to leave her because he is a Downworlder and she had killed one of their own. It’s interesting that only those deemed pure still are able to communicate with the angelic beings. Soon after the two siblings depart, a much younger looking Ithuriel descends from Heaven and greets Clary. He knows why she’s called for him and says that its not because she brought Jace back to life that he’s been having problems. He explains that the resurrection has left him vulnerable but that they face a much greater threat. A great evil has arrived on Earth and Clary thinks it’s the Owl. Ithuriel says that the Owl has a master but before he can reveal the name his chest bursts. Lilith in her winged demon form has ripped the angel’s heart out and he dies in an explosion of bright energy. The mistress of Edom then proceeds to extract a sliver of Clary’s soul and the young Shadowhunter passes out. Geez Ithuriel has had a really bad experience on the mortal realm. First he gets kidnapped and tortured by Valentine for years. Jace and Clary finally free him, but now Lilith kills him after being summoned by Clary.

She wakes up inside the farmhouse after Luke and Cleo find her unconscious. 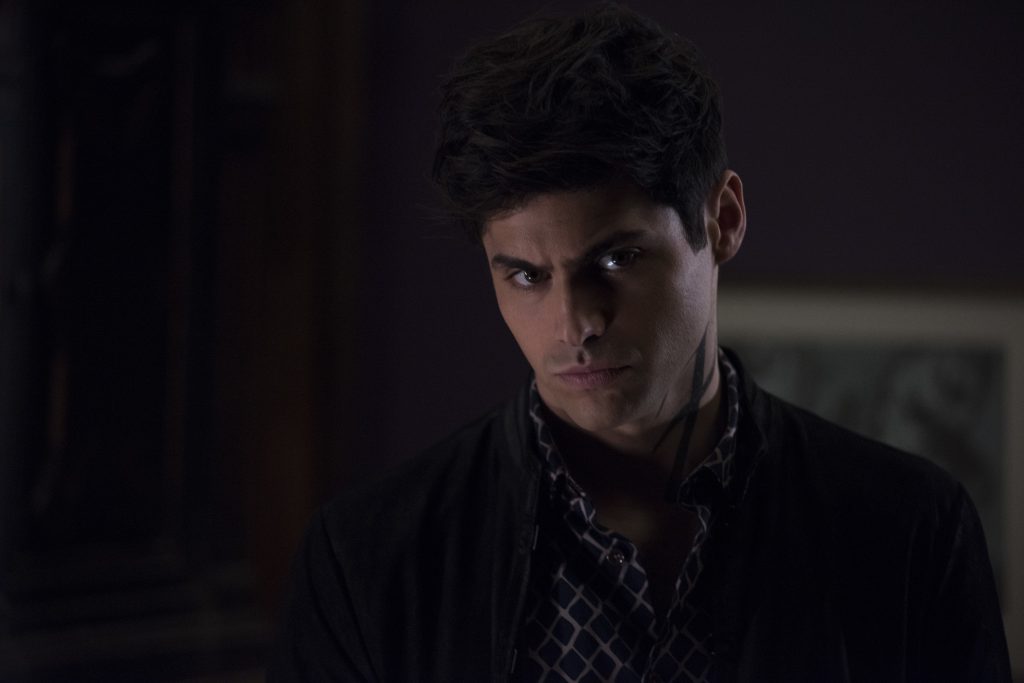 Jealousy rears its ugly head in casa de love when Alec opens a box belonging to Magnus after proposing that he move into to the loft and is gently rebuffed (since they had only started dating two months ago). There would be plenty of time for that in the future. The New York Institute head finds a number of mementos and hones in on an old picture showing the warlock and a soldier. There’s a tender note scribbled behind from a former lover named George. Later on, Alec apologizes to Magnus that he invaded the other’s privacy by looking inside the box. The ex-High Warlock of Brooklyn knew that he had of course and is glad that the Shadowhunter came clean. But when Alec asks if George was still present in the warlock’s heart, Magnus emotionally explains that box contained a keepsake from all the people he had loved and outlived. It’s the first time that Alec seems to fully grasp that the other man is immortal. Magnus further says that he keeps these tokens to remember those he had once cherished. Alec gets upset that one day maybe if he’s lucky one of his arrowheads will be inside that box too. The warlock explodes and says that he can’t change the way he is and neither can Alec. They need to just live in the here and now. The Shadowhunter calms down and agrees. 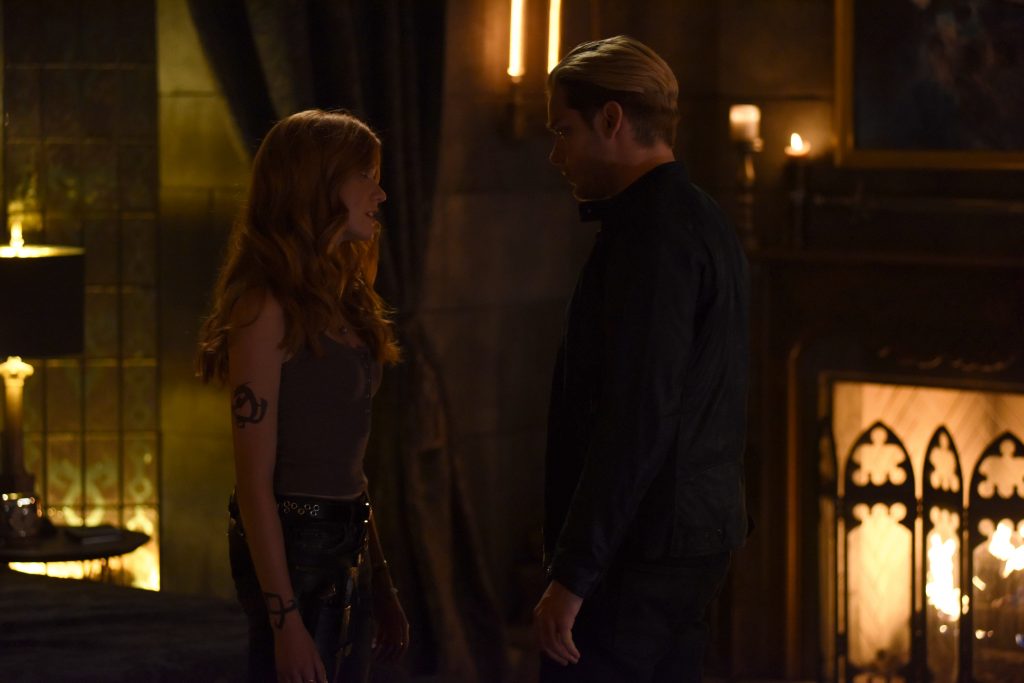 Clace Is In Trouble

On his own, Jace decides to tell Alec that he’s going to seek treatment in the Silent City. His parabatai is supportive naturally and says that he’ll go with him but Jace knows he needs to do this on his own. After convincing Simon to give his news roommate another shot, he heads to the Hunter’s Moon to catch the vampire’s performance. There, Lilith shows up and spikes his drink with Magnus’s special love erasing potion. When she asks him how he feels, Jace answers he’s like a new man. Now theoretically nothing will break her spell over him and he can resume his work as her Owl to gather more disciples so that Jonathan can get resurrected. 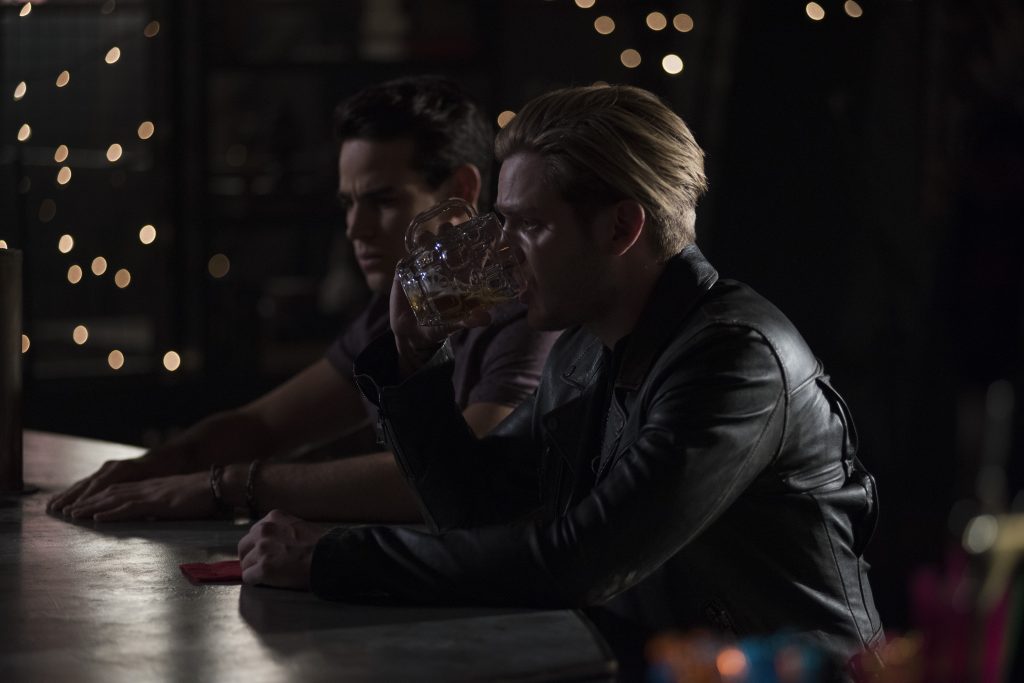