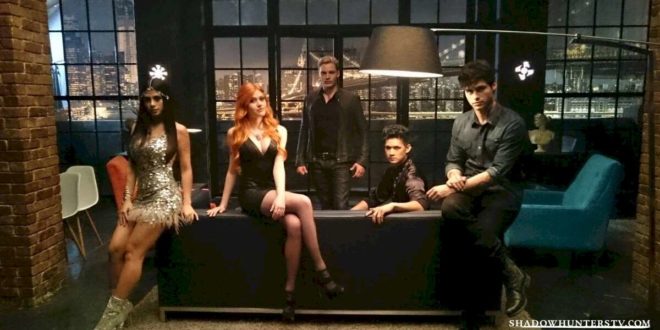 The only character missing from the picture is Clary’s best friend Simon Lewis played by Alberto Rosende.

From the Twitter chat, we also found out that they are currently filming episode six!

I love working with @MatthewDaddario – we shot a fun fight recently , but his wit kills me every time! #AskKat https://t.co/Aimrw861N0 — Katherine McNamara (@Kat_McNamara) July 21, 2015

And sorry folks, CLACE has not kissed yet.

For a complete recap of the Twitter chat, head on over to Shadowhunters TV. For more fun BTS cast pictures, scroll below!

she fights as passionate as she loves… Isabelle Lightwood @shadowhunterstv @abcfamily #IsabelleLightwood pic.twitter.com/FifrPnqab0

Alec: “I also shoot arrows.” @matthewdaddario training with @domsherwood — cut from a longer video but I thought you’d like it 😉 A video posted by Cassie Clare (@cassieclare1) on Jul 16, 2015 at 4:43pm PDT

Alec vs. Clary… Who do you think will win? ➰ @matthewdaddario @shadowhunterstv @abcfamily #regram @Lucescu pic.twitter.com/IuYGtnPPMA

Lastly check out this set tour of the Fray house with Alberto Rosende:

Nicole is the Features Editor for The Workprint. She may or may not be addicted to coffee, audiobooks, and sci-fi.
@niixc
Previous True Detective: “Other Lives” Review
Next WWE Tough Enough: “Swallow Your Pride, It’s Good For You!”

BookCon 2020: A Conversation with Cassandra Clare and Holly Black

In the winter finale of Shadowhunters season three, we at last met the father of …