In this week’s episode of Shadowhunters, we meet the new High Warlock of Brooklyn, Lorenzo Rey, played by Javier Munoz from Broadway’s Hamilton.

As a new character created for the show, Lorenzo is Magnus Bane’s adversary in Downworld as the individual who essentially usurped his position as representative of the warlocks in Brooklyn. We first meet him at a lavish party is being thrown inside his home in honor of his new position. Magnus is invited as its customary for the outgoing High Warlock to pass the baton on to his successor. He brings Shadowhunter boyfriend Alec Lightwood along as his date. The two are soon greeted by Lorenzo.

The Spanish warlock tells Alec that he’s sure they’ll see plenty of each other at the Downworld cabinet meetings. Things get a bit dicey as Magnus states that he’s quite content in his new position and that he’s sure since the other man is young and civic-minded he won’t have an issue with the long hours and little pay. The other warlock responds that he may only be 484-years-old, but he’d spent a lot of time working for the High Warlock of Madrid and so he’s very prepared. Lorenzo then hopes they enjoy the party and moves on to chat with his other guests. The couple are soon joined by Catarina and Madzie when suddenly an earthquake seems to strike. But it’s no ordinary quake, Catarina’s skin begins to turn blue and she says that she can’t control her magic. Lorenzo in the meantime looks at his own hands where we see golden scales rippling. One of the other warlocks then creates a portal to get out of there but his hand ends up getting disintegrated in the process. As the unstable gateway heads towards Alec and Madzie, Magnus jumps in and is able to undo it, though his own cat eyes appear. Lorenzo then gives his predecessor a suspicious look.

We next see the warlock at Magnus’s loft where he accuses the half-demon/half-human male of intentionally corrupting the ley line underneath his home the other night just to make him look bad. Magnus counters back saying that he couldn’t control his own glamour, but Lorenzo believes that proves nothing and that he recognizes Asmodeus’s handy work. This name clearly rattles the other warlock and he insists that he hasn’t seen the greater demon in centuries. Lorenzo won’t let it go however and retorts back that Magnus knows him more than any other being in his dimension. Furthermore, he expresses that in order to protect his people he has no qualms exiling warlocks to the depths of the Spiral Labyrinth and that he was going to expose our favorite glitter-loving individual for being behind all this. 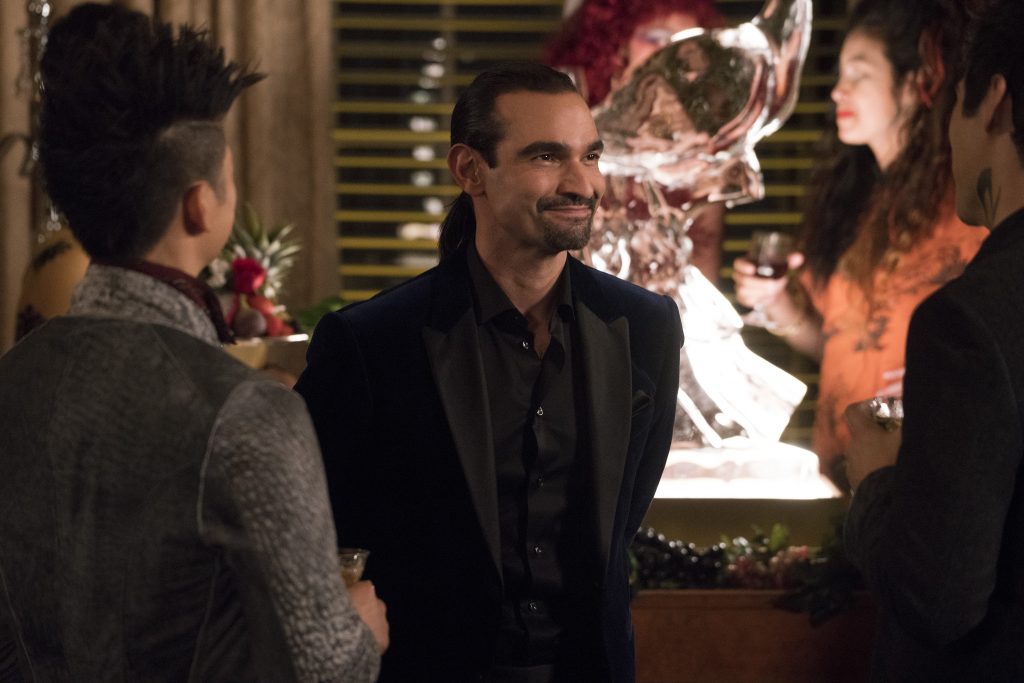 Once they are alone again, Alec asks Magnus why the other man would accuse him of working with Asmodeus and we learn that the demon is the warlock’s father. The Shadowhunter doesn’t hold it against the other man though and says that they need to stop the demon. In order to do that, however, Magnus would need to cast a locator spell and he can only do that if he is able to examine the ley lines back inside Lorenzo’s mansion. So Alec suggests that they do things the non-magic way and he ends up showing at the High Warlock’s front door to take an official statement.

“Señor Lightwood I assume you’re here to defend Magnus Bane?” Lorenzo is understandably suspicious of the Shadowhunter’s arrival. Alec responds unexpectedly and claims that on the contrary, he’s here to keep the High Warlock safe. Mr. Rey asks what if he’s able to prove Magnus’s involvement that would seem that the head of the New York Institute would have a conflict of interest. Alec answers back that he’s only interested in bringing to justice whoever corrupted the ley line and that he’d like to take an official statement. Lorenzo acquiesces and allows him inside. Once in, he explains that he knows Magnus is the only warlock capable of this type of demonic magic. Alec declares that if Magnus was responsible then he’d bring him to the Clave himself. He then suggests that they toast to their new partnership.

As Lorenzo is preparing an Old Fashioned for them both, Alec is moving over to the window to unlatch it and let his boyfriend into the house for some good old-fashioned snooping. With his back turned, the High Warlock talks about how he has been using this cocktail recipe for two hundred years and that while he could conjure it he finds mixing it by hand is the only way to achieve perfection. Alec then nonchalantly moves his position in the guise of looking around the other man’s home. With Lorenzo’s back now against the window, Magnus is able to slip in. To stall for more time, the Shadowhunter then asks about Lorenzo’s antique pot, which turns out to be a sixteenth-century Ming vase that the warlock procured from a Castilian trader when it was still new. Alec then asks if it wouldn’t be too bold of him to ask for a house tour. Lorenzo is unable to resist and jumps at the chance to show off his Fabergé egg that was a gift from the tsar in the late nineteenth century. He begins to tell the story of how he was in the Romanov Easter party talking to Tsar Nicholas II.

Upstairs Lorenzo shows Alec a painting and asks if the baby in it looks familiar. The other man correctly answers yes and it turns out to be the warlock when he was an infant. El Greco was a friend of his mother’s and he used baby Lorenzo as his inspiration. Clearly the dude is very fond of himself. We do learn however that he grew up in Toledo during the “Siglo de Oro” or the Spanish golden age. This was a period when art and literature flourished in Spain so it makes sense why Lorenzo was an avid collector of world-renowned works. 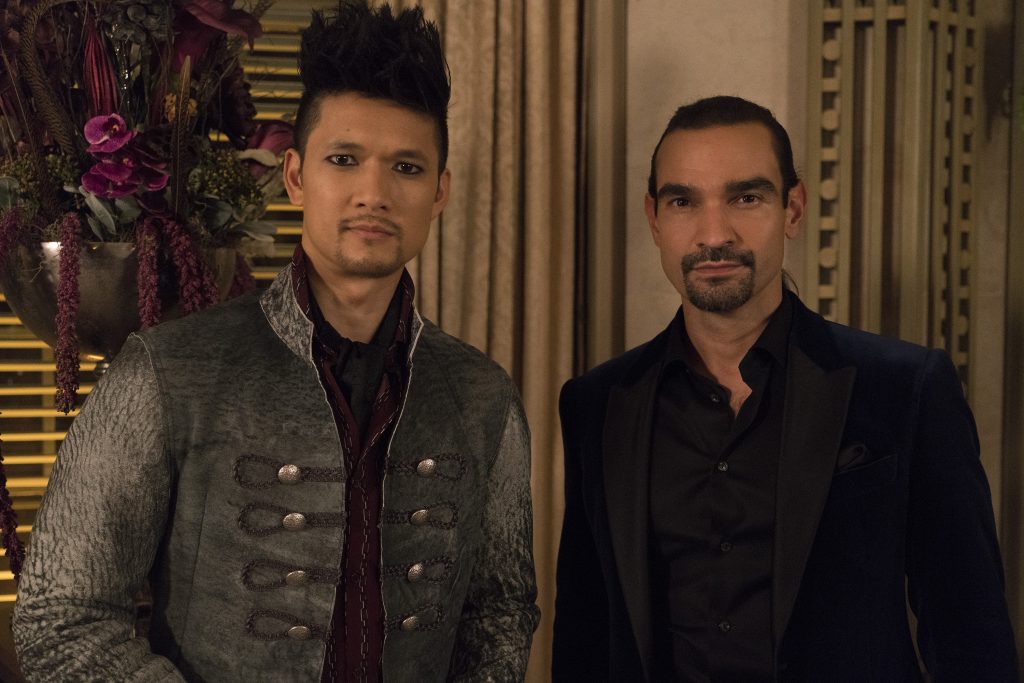 Meanwhile, Magnus was doing his thing and trying to investigate the ley line when his magic seemed to have backfired against him. He gets thrown against a wall and the sound reaches Lorenzo’s ears upstairs. By the time the two men head back down however, the ex-High Warlock had been able to repair the damage and slip outside the window. Alec gives an uncomfortable-looking smile after Mr. Rey says that’s odd when nothing seems amiss. The Shadowhunter departs soon after.

Upon meeting the new warlock representative, we see a very ambitious, calculating, and competitive man. We’ve learned that he is a lover of art, dresses quite well, makes a mean cocktail, devoted to his kind, and unsurprisingly doesn’t trust Shadowhunters. He clearly thinks Alec is biased because he is currently dating Magnus and that Magnus himself is putting his relationship above their people’s interest. This is likely how he at least partially convinced the other warlocks to elect him as their new leader. It will be interesting however to see how powerful he is in comparison to Magnus, whose father is a greater demon from Edom and one of the Princes of Hell.

Still, he is a crafty adversary to be reckoned with and will likely be causing a lot of challenges for both Magnus and Alec alike. It’s going to be great fun to see what sort of intrigues Lorenzo will be up to this season.