In this week’s episode of Shadowhunters, we get a lot of backstory on what happened to the real Jonathan Morgenstern aka the person who has been impersonating Sebastian Verlac.

It was fake Sebastian/real Jonathan (Will Tudor) who blackmailed Duncan into taking the Circle leader to him instead of to the Council (poor Duncan did not survive). In a very musty and abandoned-looking basement, he then revealed his true form to Valentine (Alan Van Sprang), a creature with skin peeled from head to toe and dark dead black eyes.

It’s an interesting storyline where audiences discover that Valentine had experimented on both his biological son and his adopted son Jace (Dominic Sherwood), then sent Jonathan to Edom. One was given demon blood while the other more angel blood. He somehow raised both boys in a remote cabin in Idris while he was in hiding without young Herondale knowing about his adoptive brother. Sebastian/Jonathan goes on to reminisce about how his father exiled him to a demon dimension and it was there where he became the creature he is now.

Apparently, the demons in residence felt that he was too pretty for their world and burned off his skin one layer at a time. Ouch. But hey, they also taught him how to draw power from his demonic blood so they tried to be helpful? He had summoned Azazel in Edom and struck a deal. The former angel would help free him from this dimension and back to Earth and then he would return the favor.

During their father-son bonding time, Valentine admits that what he did was horrific, but to make it up to his child, he would hand over the Mortal Cup. But Sebastian doesn’t care about the cup, he never had. He also reveals that he used Azazel’s attack on Isabelle (Emeraude Toubia) to gain access to the Institute. Sneaky!

The elder Shadowhunter tries to justify his actions by saying that Jonathan was out of control for murdering a young Albert Timberworth. Sebastian counters that it was an experiment because he wanted to see if a 32-foot fall would kill a boy and his conclusion was yes, yes it does. But he also defends himself by saying that it was Val who cultivated his interest in science to begin with. Let’s not forget too that good ol’ dad chained and locked him in the very basement they were in for a year. Valentine then argued that he didn’t know if he was next and Sebastian says that he wouldn’t have killed his own father (well not then anyways). He angrily adds that the other man had a choice and that he chose to protect the other boy (Jace).

Eventually we find out that Clary’s brother plans to send his father to Edom, just like he was sent all those years ago. But before that happens, Valentine grabs the Soul Sword (which activates) and tells his son that he is proud of him and that Jonathan is his greatest achievement. While still holding the weapon, the Circle leader reveals that not a day goes by where he doesn’t regret his actions. Sebastian is stunned of course because it is the truth as his dad has no choice but to speak honestly under the power of the Soul Sword.

This whole time Clary (Katherine McNamara) and Jace have been making their way to the cabin with Izzy joining them only to arrive too late. The Morgenstern men have disappeared without a trace. We next see them inside Sebastian’s apartment in New York where Valentine has just made spaghetti for dinner. The two sit across from one other each with their own devious smiles. Awkward much?

While having Sebastian be sent to Edom is different form The Mortal Instruments novels that the show is based on, it’s not a bad one because in the books he does have deep ties to that realm. Having been given the greater demon Lilith’s blood, he was allowed sanctuary there because it is one of her domains after the creation of the Infernal Cup in City of Lost Souls. In the novels, Valentine didn’t send Jonathan away and kept his son informed most of his plans, it appears that on show the duo end up working together regardless.

This is the most human we’ve seen of Val so far, wherein throughout season 1 and most of season 2 he played an almost one-dimensional villain. How could we believe that he really loved Clary and Jace when he constantly lied and only cared about his agenda. But it was unexpected for his character to grasp the Soul Sword and admit his regret over Jonathan. Even when Jocelyn died he didn’t show any kind of grief. In addition, nothing has scared him until now and we get a sense that here are two predators sizing each other up. But it is clear that he views the young man as a weapon that he intends to use against his enemies. It is possible that he did this out of the need to survive, that if he could convince Sebastian that he cared about him then he would be spared a trip to Edom.

In the novels, Valentine’s cruel parenting turned his kid into a psychopath, though his demonic blood also plays a role. On the show, Sebastian has shown tendencies to be cold and heartless at a young age, which frightened his father enough to send him another dimension. He may have physically become monstrous as a result of his time there, but it is also the act of his father’s betrayal that emotionally and mentally scarred him possibly to the point of no return. The nature vs. nurture theme still translates from the original source to the adaptation. Would he have turned out this way had he been raised by Jocelyn (Maxim Roy) instead? Alas, we will never know. 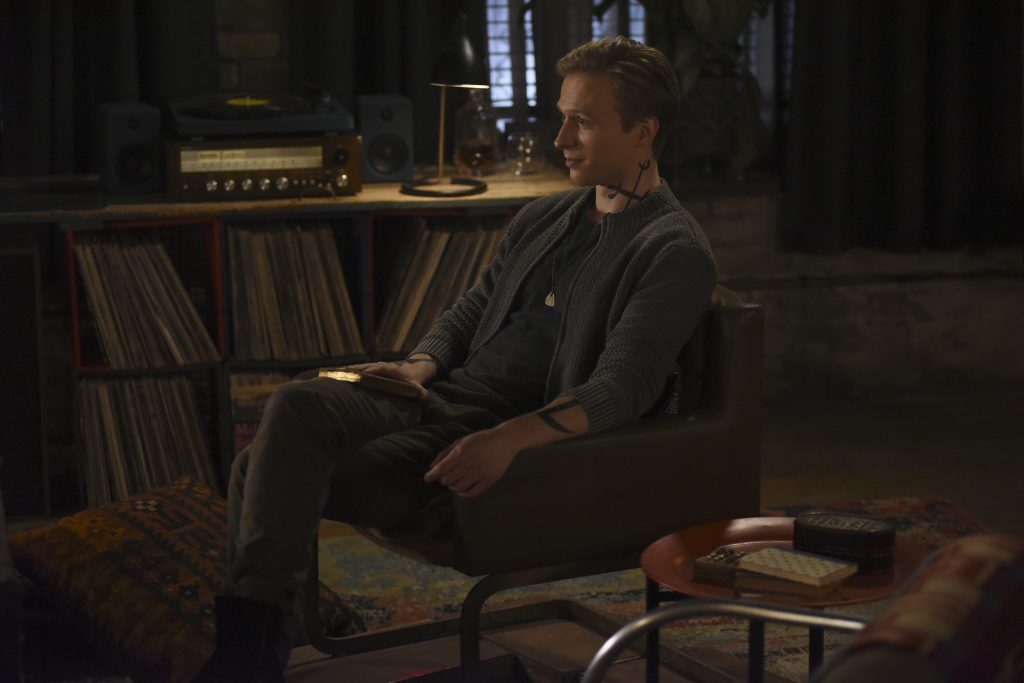 Their evolving relationship is going to be interesting to watch as we find out whether Valentine is really going to atone for his mistake towards his son, or is he going to continue to be selfish? Sebastian is clearly dangerous and may be holding on to a thin shred of sanity that could snap if his father abandons him again. Towards the end of this week’s episode, Jace shows Clary numerous journals filled with his adoptive father’s notes comparing himself and Sebastian. This shows us how clinical the Circle leader approached his experiments and whether or not he still views them this way remains to be seen.

Alan Van Sprang and Will Tudor both did an amazing job portraying the intensity of their characters and their complicated familial ties. It was such a pleasure to watch and certainly the Morgenstern men are up to no good.