‘Shadowhunters’: What Do We Know About Consul Jia Penhallow?

In this week’s episode of Shadowhunters we return to Alicante and meet the new Consul, Jia Penhallow.

Clary, Alec, and Isabelle have come to the capital of Idris to speak to Inquisitor Imogen Herondale about her grandson. Before that though Ms. Fairchild finally comes clean with the Lightwood siblings, Magnus and Simon that Jace had died (Valentine killed him) and she brought him back by asking Raziel for a wish and now he was being controlled by Lilith as the Owl. Alec hugs her and says that he would have done the same thing. This makes total sense because their parabatai bond would trump his loyalty to the Clave. At another team meeting later on, Izzy remembers that there was a piece of cutting edge Clave technology that might help them save Jace called the Malachai Configuration (it was the former Consul who was developing it to trap greater demons). If they could use that to contain Jace, Magnus may be able to figure out a way to remove the mother of demon’s influence on him. The only problem was that the device was in Alicante.

They are forced to tell Imogen Jace’s current condition, hoping that she helps them to save the only family she has left. Thankfully she agrees to aid them, but as they are on their way to the armory they are stopped by the current Consul. Since Malachai Dieudonné’s death, Jia Penhallow had succeeded him in the position. Flanked by two other Shadowhunters, she asks what brings the crown jewels of the New York Institute into town and Clary answers that the Inquisitor was just giving them a tour with Izzy adding that she wanted to see the armory so that she could improve operations back in New York. Jia says that’s a wonderful idea and asks to join them. Without missing a beat Alec asks if he could have a private word with her. As the other three women depart, she asks if this is about Maryse. He answers no, however he was actually having second thoughts about declining the delegate position she had offered him. The elder Shadowhunter is glad that he’s reconsidering it, but unfortunate the spot had already been filled. Well that’s a relief because he didn’t really want it!

Jia was appointed Consul after the Malachai was killed last season by Jace for secretly working with Valentine. She is currently married to fellow Shadowhunter Patrick Penhallow and is the mother of Aline as well as the aunt of deceased Sebastian Verlac (through her marriage). Jia is also an important character in the Shadow world, as Consul she leads the Nephilim and the Council in keeping the world safe and maintaining the accords. She is played by Canadian actress Francoise Yip.

WARNING!! SPOILERS FROM THE MORTAL INSTRUMENTS AND THE DARK ARTIFICES AHEAD

Jia and Patrick had met and eventually ran the Beijing Institute, though they moved to Alicante at some point in time. They have only one child, Aline who lived with them at the Shadowhunter capital. When Jia became Consul, she petitioned to keep looking for a missing Jace but was overturned with a priority to fix the wards on Wrangel Island instead. During the Dark War, her family housed Emma Carstairs and the orphaned Blackthorn siblings because of Aline’s relationship to Helen Blackthorn (the two were engaged to be married then). While her husband was saddened with the end of his side of the Penhallow line, Jia was more concerned that her daughter’s heart would be broken by the half-fairy Helen.

As all Shadowhunters were recalled to Alicante during this time in City of Heavenly Fire, a Clave meeting was called to inform them that the Downworld representatives had gone missing. At this event, she was accosted by Matthias Gonzales who had become one of Sebastian’s Endarkened warriors. Thankfully her life is saved through the quick actions of Alec Lightwood who shot an arrow at the ex-Shadowhunter with his bow.

Jia tries to be a fair and empathetic leader with more tolerance towards Downworlders than other Shadowhunters. She takes Simon’s input as a vampire seriously after they discover that Sebastian had kidnapped the Downworld representatives. She also listened when werewolf Maia Roberts sent a message through warlock Catarina Loss that the Endarkened would attack Alicante. Young Ty Blackthorn later discovers a message (cleverly hidden in an acorn) from his other half-fairy sibling Mark that the fairies had betrayed the Nephilim and Jia is told about this through Julian Blackthorn and Emma. She promises the pair that they will try to get Mark back from the Wild Hunt. The Consul also knew of Brother Zachariah’s true identity as Jem Carstairs. She offers to send him to the Spiral Labyrinth so that he can be with warlock Tessa Gray. She comments that he had served the Clave long enough and that they could ask no more of him. 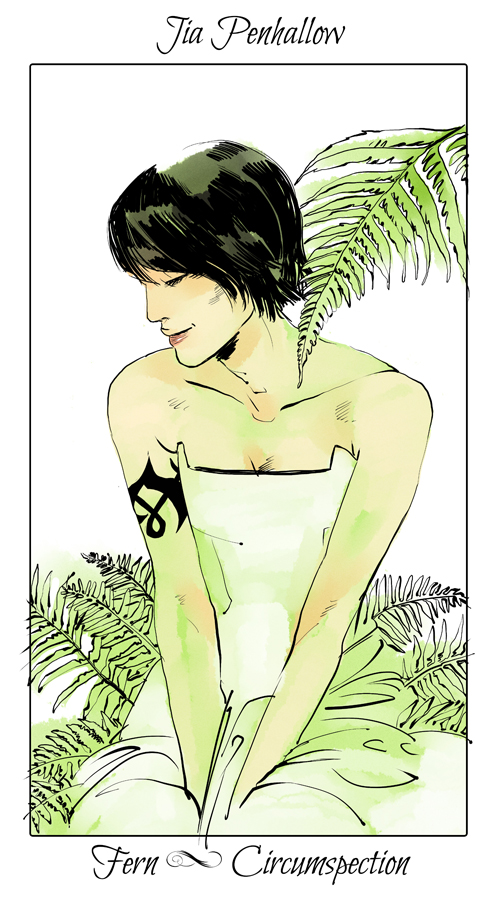 In The Dark Artifices series which follows TMI, she is still serving as Consul when Emma, the Blackthorns, Magnus, and Annabel head to Alicante for the resurrected Shadowhunter’s grave testimony. While a new political power, the Cohort, had arisen after the events of the Dark War, Jia is not fond of their extremist views towards Downworld. She is present while Annabel is brought to the Clave to tell them about the Unseelie King’s plan for the destruction of all Nephilm. Jia, along with the rest of the Clave witnesses the horror of Annabel’s PTSD after she is pushed too far resulting in the deaths of Livy Blackthorn and Robert Lightwood.

Throughout Cassandra Clare’s novels, Jia had always tried her best to be a tolerant, fair, and just leader. Though she still had to adhere to the decisions of the Clave, she did fight for what she believed was right. It will be interesting to see how her character is portrayed on the show given that Clary had just been caught at the graveyard after sending the Lightwoods and Jace away through a portal. Jia will have to help determine what to do with Valentine’s daughter.

@theworkprint
Follow
Previous article‘Royals’ Review: Scandal in Scotland Makes For a Great Summer Read
Next article‘Shadowhunters’: Family Matters in ‘A Heart of Darkness’