‘Scandal’ Review: Heavy Is The Head

Over the course of Scandal, Olivia Pope (Kerry Washington) has fought against a terrorist mother, a titan of a father, hacking kidnappers and even her own Gladiators. But the one battle she’s yet to claim victory with is the tug of war between her common sense and her heart that still madly beats for President Fitz (Tony Goldwyn). Unfortunately, this may prove to be unbearable after five seasons of back-and-forth between wanting to publicize it and the understanding of what may happen if their relationship does go public.

For much of the previous seasons, Olivia has been thwarted by forces out of her power from doing the traditional job of a “fixer” but it seems as if creator Shonda Rhimes wants to wring back the stylistic nature of Season 1 with a heavier focus on Olivia’s profession instead of her personal life. To do this, she pulls from the tragic death of Princess Diana to do an uncanny rip, taking everything from the secret affair to the girl-next-door personality. Honestly, it’s lazy and only serves to continue the calm before the storm of this season. 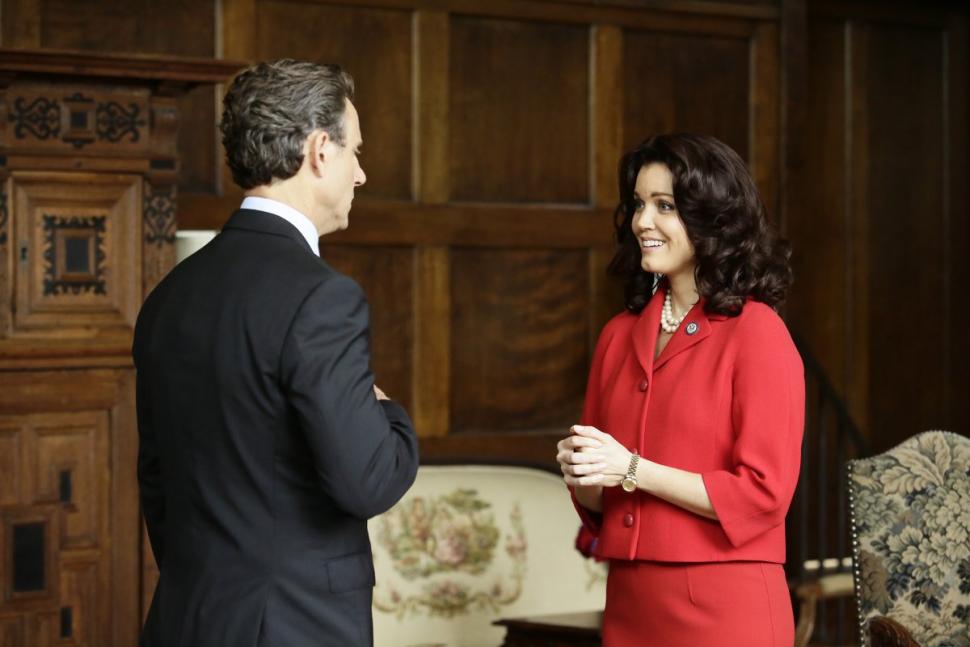 Most of the meatier parts of this episode involve Mellie (Bellamy Young), accepting her new position as Senator of Virginia, the first woman to do so. Despite the immense celebration that she feels internally, Mellie once again becomes the scapegoat for all of the problems caused by those around her. Fitz announces his intention to divorce her, a move that proves that Fitz is just a rebellious 13-year old inside caught up in his raging hormones. Chief of Staff Liz North (Portia De Rossi) is confronting Mellie on her position as Senator being a seat filler for who the real queen is – herself and Sally Langston (Kate Burton)  is continuing to prove why ultra-religious conservatives may just be the terrorists of America by standing in Mellie’s climb every step of the way.

Battle lines are drawn and as Olivia and Fitz find themselves becoming more of a real couple, Olivia is faced with the dilemma of how rocky and fragile her relationship is with the President. For once, she says something beneficial, smart and so real.

“I want you, I want us,” she tells him. “But I want to slow down. I want our business handled. I want our problems fixed. I want to be ready before the world is watching.”

But just as predictable as this Princess Diana story was (yeah, her mother killed her because the Princess wasn’t good enough for the husband, go figure) the show ends with them being exposed (FINALLY) as at least having a casual flirtation, leaving the strings hanging for just how wild this show may end up steering us. One of the strengths of Scandal is its ability to always excite its audience, despite the overwrought script and the disdain towards many of its characters. It doesn’t look like that excitement is fading anytime soon.

Previous article
‘Modern Family’ review: The collar is the “V”
Next article
Smackdown – September 24, 2015: Have Fun But Don’t Watch