‘Modern Family’ review: The collar is the “V”

Watching tonight’s season premiere of Modern Family so soon after watching the series premiere of The Muppets reminded me of catching a Major League Baseball game at AT&T Park — and then venturing over to the city’s Single-A ball stadium to catch a minor-league affair.

That’s not an insult. If it sounds like one, I do apologize.

When we last left the Dunphy Family, Haley was entertaining thoughts of sabotaging Andy’s marriage proposal to his new girlfriend. Alas, Haley ends up staying out of it and Andy’s engagement goes ahead with no interference. From here, the episode buzzes through the entire summer, month by month (separated by the commercial breaks and title cards), which gives us a look at the fallout from that moment and the other stories from last year.

With Haley’s heartbreak as background noise, Mitchell and Cam are in dire straits due to Mitchell’s lack of employment and no job prospects on the horizon. With Mitchell losing his mind and Lily worrying that her family is broke (she’s eating ketchup sandwiches and telling Claire not to lose the foil covering their potluck offering in one several very funny running jokes), Cam recommends that Mitchell take up painting — which he does — but he isn’t very good at it and is eventually outdone by Alex who chalks it up to “being good at everything”.

The second running storyline involves Gloria and Jay attempting to find the right pre-school for Joe, which goes predictably awry. The first school caters to the stars but due to privacy restrictions, the school’s headmaster can’t reveal the famous parents of any of the children — yet, drops obvious hints (“you’ve got a Sixth Sense about that hunch”). The school, however, turns out to have an extensive waiting list — and unsafe furnishings. “It’s ironic that the person donating this stuff couldn’t use a hammer and now we can’t touch this,” she says. The other school turns out to be a borderline hippie commune where the kids have the opportunity to interact with possibly-rabid wildlife like rats and mice. That, and Joe accidentally murders a chicken (off-screen, so as not to piss off PETA which is impossible to do no matter how a show portrays a scene like that), so that deal’s off. Even still, this storyline manages to wring a laugh or two when, following the demise of said bird, Gloria and Jay look on, stunned. In pure deadpan monotone, Gloria grabs her purse and says, “We would be happy to pay for that chicken.” 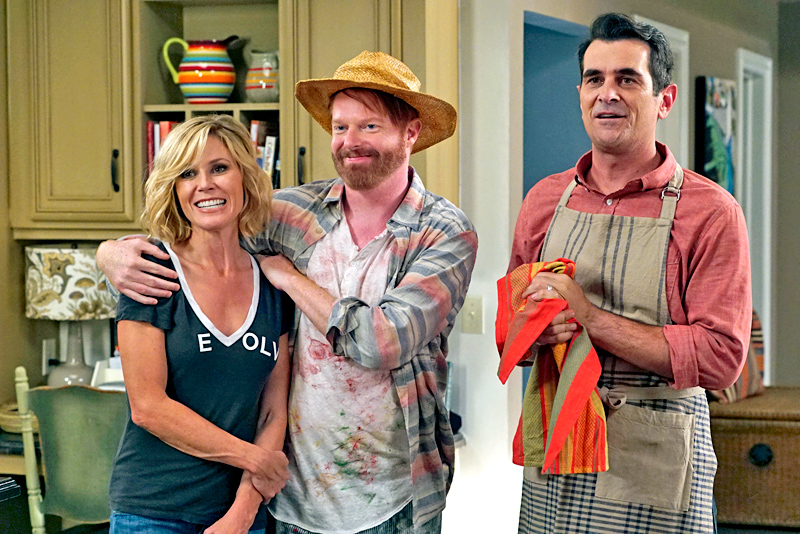 The episode comes together with the Dunphy Family who, for all intents and purposes, are the center of the episode. Whereas Haley struggles with her feelings for Andy, Alex and Sanjay know what they feel — and willingly decide to break it off before going to college so that they remain completely unencumbered or tied up. This proves to be a mistake for both parties who just cannot, for the life of them, accept that love cannot be categorized or statistically quantified. “I had to be strong for the both of us, which he said he admires,” Alex tells Mitchell. “I think [that’s what he said]…it was hard to hear him with all the John Legend and sobbing.” This, of course, leads to the aforementioned painting snafu which results in Mitchell destroying Alex’s painting in a fit of rage. The angst mirrors Mitchell’s appearance: he now fully resembles Vincent Van Gogh, wearing a shirt with pastel stripes and a straw hat. As for Alex and Sanjay, they still attempt to use math to classify their love life. They’ll succeed because they’re smart.

“I learned how to paint in an afternoon!” Alex tells Sanjay.

“Last night, I developed an app that feeds my fish from college!” He replies.

They embrace, united by the reassurance that they’re the “top one percent” at everything. That’s love.

Meanwhile, Phil and Claire’s pact to “no longer meddle” in their kids’ lives backfires again and again…and again. At first, Claire tries to help Haley with her boy problems by keeping her distracted. They hang out daily and even knit (using articles of trendy, hipster clothing Claire no longer wants Phil to wear ever again — like his Kangol hat) — until Haley gets involved with Dylan again. Dylan, to his credit, is trying to start his own clothing business, making t-shirts with uplifting phrases on them. “The neck is the ‘V’,” Dylan tells them after they ask why he’s wearing a shirt that seemingly spells, “LIE”. This impresses the trend-hungry Phil to no end and he encourages the rebound relationship, despite the fact that Dylan’s still dumb as a bag of hammers. “If I could make a bong out of a carrot, I can make you a plate of food,” he tells Haley in his own pseudo-chivalrous way. Of course, thanks to Phil and Claire’s meddling (unintended this time), Andy learns about Haley’s affections and begins to eat more until he gains about 20 pounds as the months fly by.

“Summer Lovin'” works because of its ability to succinctly sum up several of the loose ends it had established from last season. One of the issues I had with the episode, however, is that not all of the plot threads are interesting. The pre-school hunt, amusing as the schools turn out to be, is really a throw-away plotline which ends in moralistic greeting card fashion. Even still, it’s better than the main plot. Haley and Andy really have no chemistry and while the punchline (his weight gain) is a funny sight gag, it really smacks of the writers trying to hard to be funny, working once before it becomes patronizing. Despite this, It’s a fun episode, a nice way to kick off a show that’s become a reliable television comedy standard. It’s an example of what I hope The Muppets eventually becomes: tightly written, world-weary, and too smart for its own good. It’s a veteran in the entertainment dugout. It knows how to get laughs and does so with ease. It’s not the best episode of the show’s growing history but it says something when a sitcom boasts this much quality after six full years.

Previous article
‘Heroes Reborn’: Is That the Kensei Sword?
Next article
‘Scandal’ Review: Heavy Is The Head