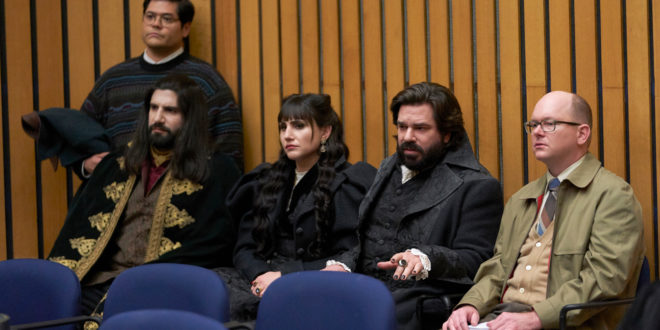 ‘What We Do In the Shadows’ Review: Run For Their Life

Have you ever been reprimanded by a parent? It’s not sunniest of times, but it’s also not the most disheartening. Have you ever been reprimanded by your parent’s parent? That will mess with your psyche so much, you either want to pick yourself up by your bootstraps, dust yourself off and try harder or you want to pull a Kano on yourself and do the disheartening. The former thankfully is where we begin on the second episode of What We Do In the Shadows (FX).

We open up whence we left off, as the Baron rakes the group over the coals in them being lackadaisical in their purpose- to take over the New World within their Old Ways as a path subjugate humanity. To me, Staten Island is a great jumping off point. Geographically, they group is between two worlds (New York, New York and Philadelphia, PennsylVANIA). The housemates feel their feet to the fire and hold an impromptu meeting (in the Fancy Room) to devise their strategy. Not until Colin Robinson, their oft looked over (but most powerful) roommate joins the brainstorming that things are set into motion.

We’re treated to a master scene with all the vamps at a City Council Meeting which is a feeding ground for Colin, which he calls “a smorgasbord of banality and despair”. He knows what he’s doing and he’s Top Shelf with it… If that top shelf were also members on the board and the crowd in tow. Through a series of statutes he proposes on the behest of the rest of the group (whom still barely tolerate him) to have on the books and record for consideration, he is able to drain them all of energy until the perfect one is primed for the picking of the panel. More on that in a moment.

We also take stake (hiss) with a sub-plot of Nadja taking pity on virgin member of the previous LARPING community, Jenna (Beanie Feldstein). As a woman, vampire or not, she understands the being passed over when in a group of guys.. even in the setting where she’d be you would think coveted. I was initially thinking she was going to possibly going to make Jenna a familiar, as hers was voraciously consumed by the Baron himself upon awakening. I get it… some of us want a hot breakfast when we wake up! No judgement. Instead, Jenna is what’s on the menu, but not before her falling for Jenna. I figure it’s Nadja’s way of wanting her even more, which invites some trouble in the homestead with Laszlo. Hey, ya gotta be invited in to be kicked out.

Speaking of seduction, Laszlo, set on his romantic ways feels that going for the head of the City Council is going for the heart. In a failed attempt to win her over, he murders all the Raccoons in Staten Island and lays them at her doorstep like a feline, causing a Racket.

These night-walking denizens are all well meaning, but they still haven’t adapted to the way stuff works, so I would give them a little leeway. By that way, I would say the whole subplot is kind of throwaway, but it’s still funny.

Lastly, we concurrently deal with Nandor, whom, in his own way is contributing to the house. I mean, do these people have jobs? Outside of cleaning the occasional cobweb and Colin having an actual job, the rest just have to simply exist and conquer. I’m not saying that’s not awesome, but I want to know them more as (formerly) living people. I could so see myself commiserating with the likes of any of them, living or undead. Well maybe not Colin unless he let me into his magic.

With the Relentless, Nandor lives up to his honorific, trying to topple the Council and going for the throat.. well, not literally. He plays the long game, going for Doug Peterson, a constituent on the Board hypnotizing him. He plays mind games with him, resulting in one of the funniest scenes I’ve seen in a while. Through a bit of mind prompting, Doug at the next Board Meeting goes ape and this is when we see the full power of his cunning. We also see how turgid Colin gets. To impress a vampire whose sole purpose is to bore you to death? That’s a gift… and probably a curse.

Robert J. Kijowski is a screenwriter who enjoys a good chuckle and an even better weep when indulging in art both good and even better bad. He enjoys the company of strangers in a theatre but adores the camaraderie of friends watching Netflix. He also loves to talk- a lot. This can be read through his recaps and reviews on the Workprint or heard through his weekly movie podcast, After the Credits. His presence can be felt through Facebook, Spotify or Ouija. Don’t use the latter though- he almost always ghosts people.
@writer_wronged
Previous ‘The Magicians’ Review: The Binder Reveals All
Next ‘The Tick’ Season 2: Review

What We Do In The Shadows episode 2.07 Recap – The Cat In The Scat