Earlier this year, I feared the worst for Rogue One: A Star Wars Story. Plagued with stories of extensive reshoots and Director Gareth Edwards being replaced during the post production process, it seemed that this first Star Wars spin-off film was destined to be a mangled mess of conflicting creative input driven by big studio meddling.

Whatever the real story behind the making of this film is irrelevant though, because as it stands the film is something of an action masterpiece.

In fact, Rogue One feels more like a sequel to the 1977 original than any of the films in the series that have come since then. And yes, this is indeed a prequel to that film, but in tone and spirit no other film has come closer to matching it than Rogue One. I realize that some of you are reading that and saying, “But wait – The Empire Strikes Back is the greatest Star Wars film!” And yes, that still might be the case, BUT Rogue One captures the spirit of the original by fully investing in the gritty side of the universe and the sort of blue collar folk who inhabit it. Missing from the main action here are princesses and Jedi Knights. Instead we get a ragtag group of lovable characters who remind of us of Luke, Han, Chewie, and the gang before they became all that they became to be in the various sequels.

The characters of Rogue One are an intoxicating blend of comical, strong, haunted, and selfless. This mix is led by Jyn Erso (Felicity Jones) who has the unwelcome distinction of being the daughter of the man who created the terrible Death Star (Mads Mikkelsen) and the surrogate daughter of a rebel fighter, Saw Gerrera (Forest Whitaker) who has taken to extremism and no longer fights in conjunction with the Rebel Alliance. When forced to try coaxing Gerrera into rejoining the alliance, Jyn eventually teams up with a hard edged spy (Diego Luna), a reprogrammed Imperial droid with no filter (voiced hilariously by Alan Tudyk), a defector Imperial pilot (Riz Ahmed), a blind man deeply religious with the Force (Donnie Yen in possibly the film’s standout performance), and a gun-toting sharpshooter (Wen Jiang). 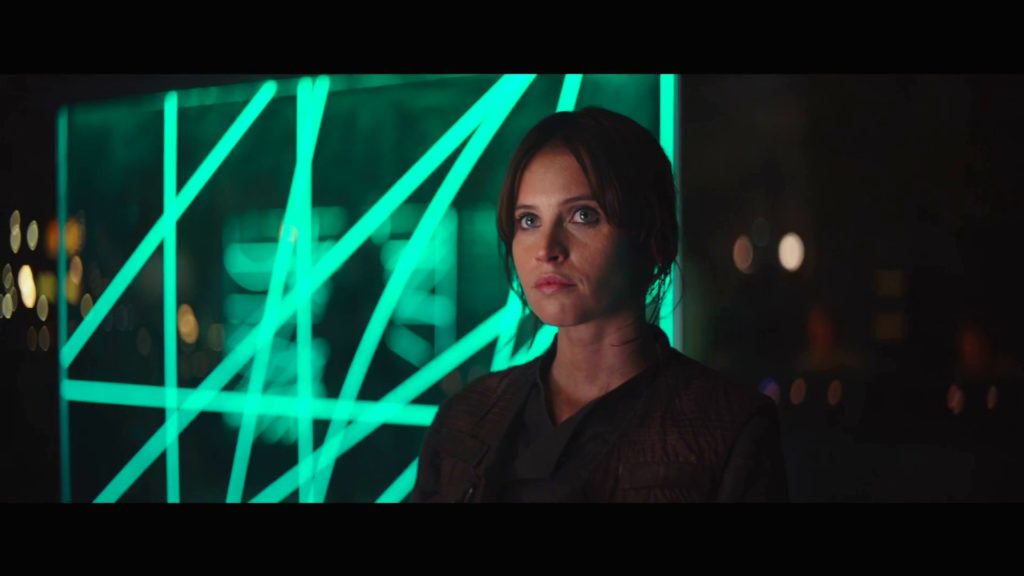 In many ways this crew is the Dirty Dozen in space. Their relationships are varied and complex and ultimately touching as they go on a journey that pits them against a villainous Imperial officer (Ben Mendelsohn) determined to protect his Death Star from Rebel meddling.

I honestly won’t go into more detail than I’ve discussed here because for once the film’s marketing doesn’t give away most of the film’s plot! The story takes multiple twists and turns and features a rousing climax that will make you cheer, laugh, and possibly weep. Seriously, most of you won’t see this type of climax coming from a major franchise film.

What I will reveal though is that fans hoping for some fun cameos are in for a major Christmas treat as some seriously geektastic appearances come at you left and right once the film really gets moving. But beyond that my lips are sealed until you’ve seen it for yourself! 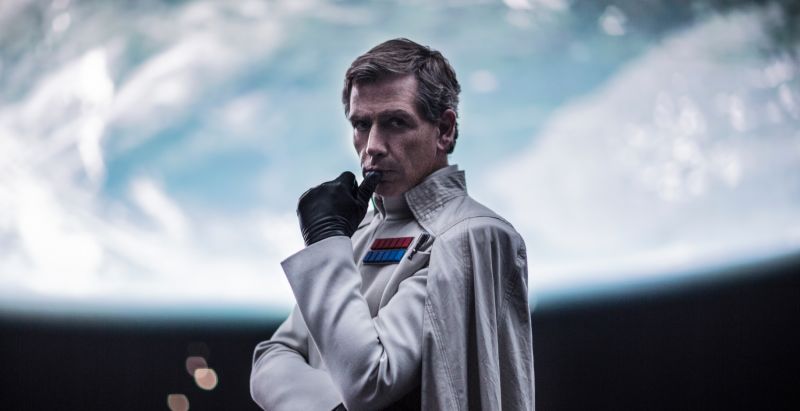 The special effects are of course marvelous, the design is perfectly in tune with the original film, and as the first film in the series to not have John Williams on board as composer even the music feels right thanks to the always reliable Michael Giacchino.

In short, Gareth Edwards has set the bar incredibly high for any future Star Wars spin-offs (the young Han Solo movie being next up on deck) and it’s hard to now look back and worry that he may have fumbled this one. This is one of those rare big movie experiences in recent memory that seems to have fully surmounted all of the bad mojo and rumors that preceded its release. It’ll be fascinating to someday hear the true dirt about how the making of this film played out but regardless of behind the scenes drama, what makes it onto theater screens this weekend is nothing short of a triumph and proves that there’s more magic in Star Wars beyond the story of the Skywalker clan. Rogue One opens the door to endless stories in that galaxy far, far away and I look forward to returning there anytime I can.