Incorporated gets right down to business this week in “Downsizing” as Spiga launches a full investigation into Chad’s treason, and we get to meet Theo’s boyfriend!

“Downsizing” begins with a flashback to 2062 with Aaron/Ben’s father confessing his sins to his son on a rooftop. This scene serves as a nicely packaged exposition to let the audience know a little bit about how the world became the hell hole it currently is. Aaron’s father worked for an insurance company that was rigged to make sure that no one got home insurance payouts when mother nature hit. Instead, everyone in the insurance world was driving around in their gas guzzling Hummers with their AC cranked up to make sure they released as much CO2 into the air as possible. His explanation of the evil insurance companies almost makes it sound like the insurers and Mother Nature were in cahoots? Wait do you think that is why conservatives deny global warming? Because they actually have an under the table deal with the Mother Nature to make more money? Food for thought.

After Papa Aaron confesses his sins he apologizes to his son and he jumps off the rooftop to his death. Young Aaron is now an orphan set to navigate the life of a climate refuge on his own. 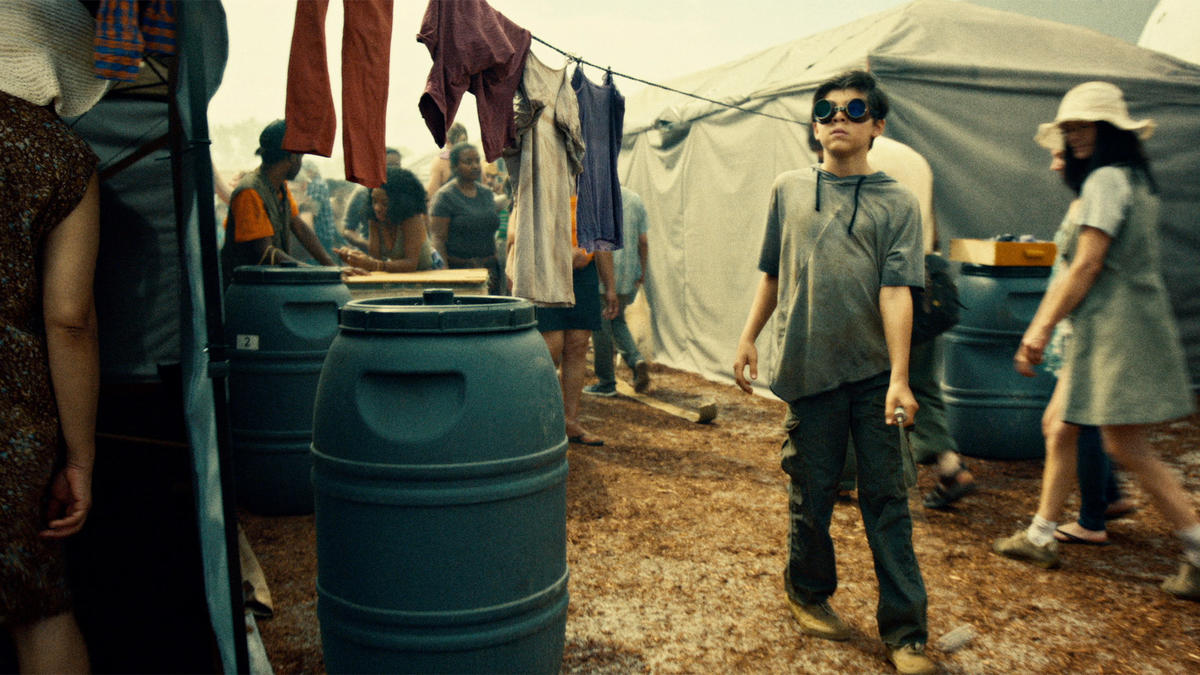 Luckily Aaron is some kind of mechanical engineering genius as he is able to keep himself afloat while also playing Robin Hood for his fellow refugees. He was able to take a computer doodad and re-purposes it into a reverse retinal scanner that looks like welding glasses. His ruse is actually pretty impressive. He puts on those dark welding glasses, pretends he is blind so that the enforcers, who get more rations, looks into his eyes and he reverse steals their retinals (That is how reverse retinal scanners work right?). Aaron almost gets caught carrying out his con but young Elena is there to help him hide and it is puppy love at first sight. They bond over food and Aaron’s brilliance and being young climate refugees together. Their romance is cut short though when Elena leaves the refugee camp to live with her aunt in The Red Zone, a life which is presumably better than living at the camp. 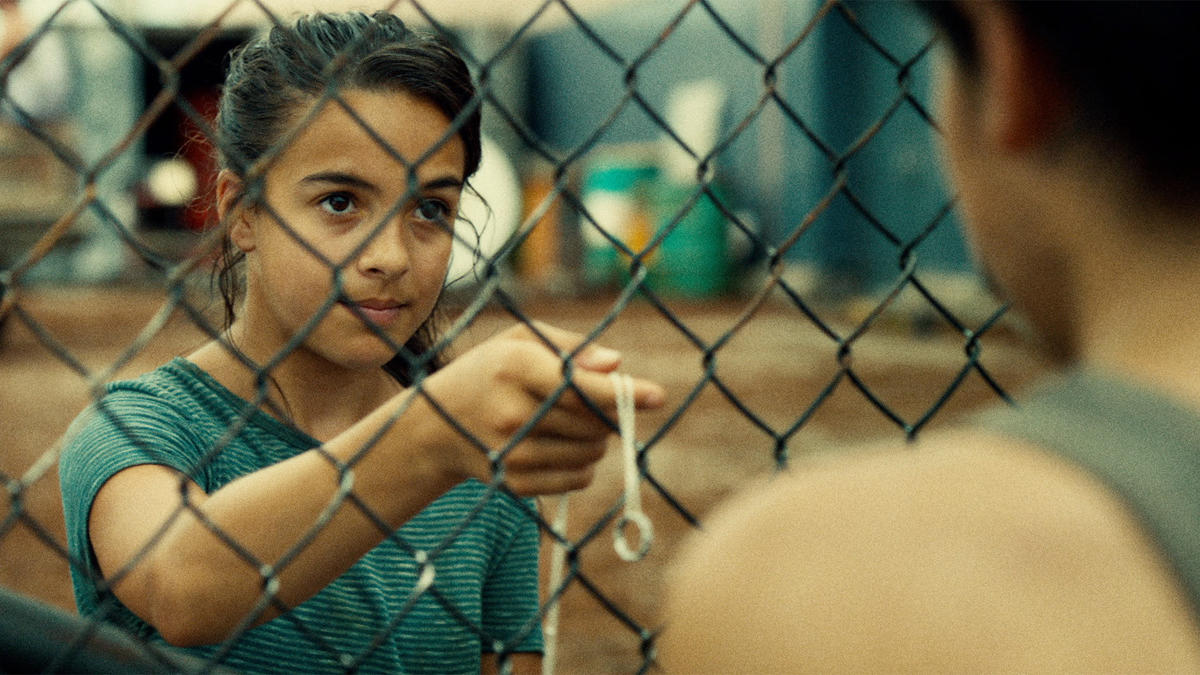 I am going to assume that there is more to the Elena backstory because if there isn’t that will suck. I think what will happen is Aaron searches for her in the Red Zone and they fall in love again. My question is when Theo comes into play? I thought last week he said he was Elena’s brother, but wouldn’t he have been in the refugee camp with Elena then? Maybe he is a cousin and they call each other siblings because they are close and he is the son of the aunt she goes to stay within the Red Zone? I guess only time will tell.

On the topic of Theo, let’s talk about my favorite character. Sporting a black eye he comes home to greet his boyfriend Anthony with dinner and a kiss. What may you ask is for dinner? Well, it is liquid synthetic steak served in a Jumbo Gulp Sized cup. Anthony is not too keen on the idea of Theo fighting for Terrence, the poster child for crazy ass psychopaths, and joining a fighting ring. Just as Theo tries to assure his boo that there is nothing to worry about, Terrence bursts into their apartment to heal Theo’s busted eye via cryotherapy and to inform Theo of his first fight. There will also be a sponsor scout at the fight, so Theo better not fuck anything up for Terrence. 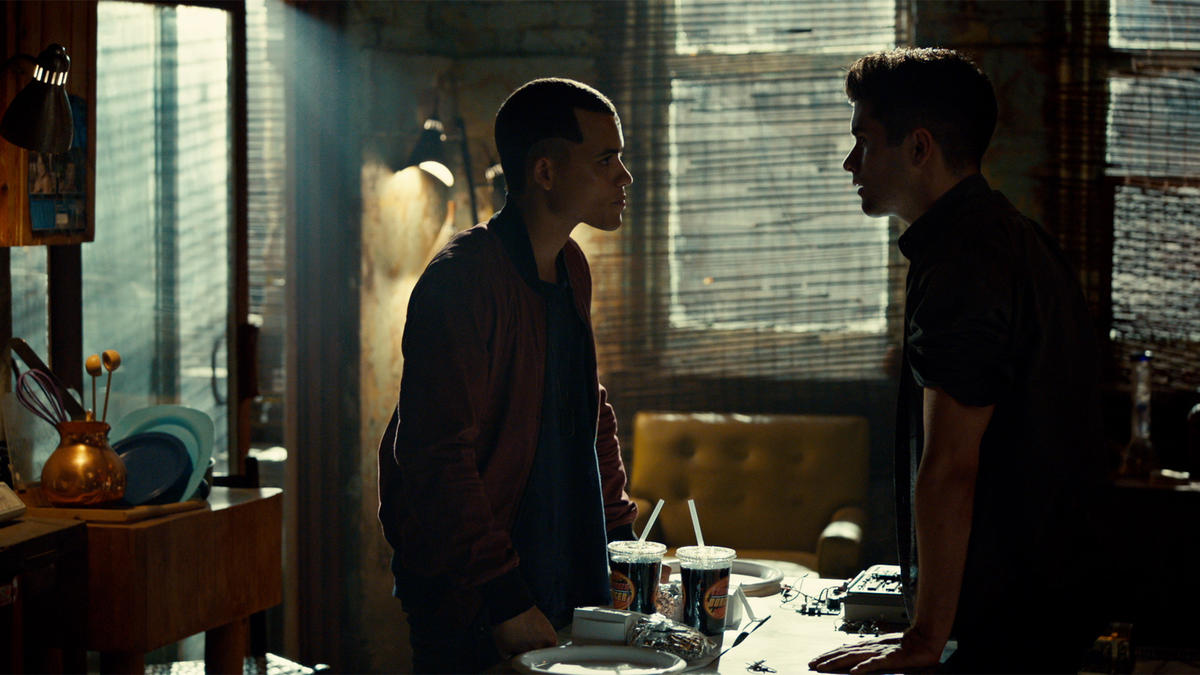 Theo’s first opponent in the Fight Club is a dude so big it is highly possible he is a mythical creature. But the big ogre Sayeed has got nothing on Theo’s youth, agility and ingenuity. While Sayeed is at least three times Theo’s size, Theo stabs Sayeed in the eye with what I believe to be a fang of a Saber Tooth Tiger and subsequently wins the fight. Theo is ecstatic, but it seems as though he is the only one because no one cared to mention to Theo that he was supposed to lose. Terrence goes ape-shit crazy that Sayeed last to a newbie and bludgeons Sayeed to death with an old fighting trophy. Theo is now Terrence’s ticket to getting a sponsored fighter, and well, if he fucks up he faces the same face as Sayeed the Ogre. But, on the plus side, Theo gets to bring home some real non-liquid steaks for him and his boo to eat for dinner.

The treason of Chad is addressed immediately in ‘Downsizing’ as the entire company is on lockdown until they uncover the reason for Chad’s betrayal. And as with all good interrogations, Spiga immediately resorts to torture in the dreaded Quiet Room. I feel like a horrible person that I did not feel super upset about Chad being tortured. I did not know him enough to care, and what I did know about him was he was an asshole, but certainly, I should feel some compassion towards Chad right? I guess I am just a monster with no feelings. 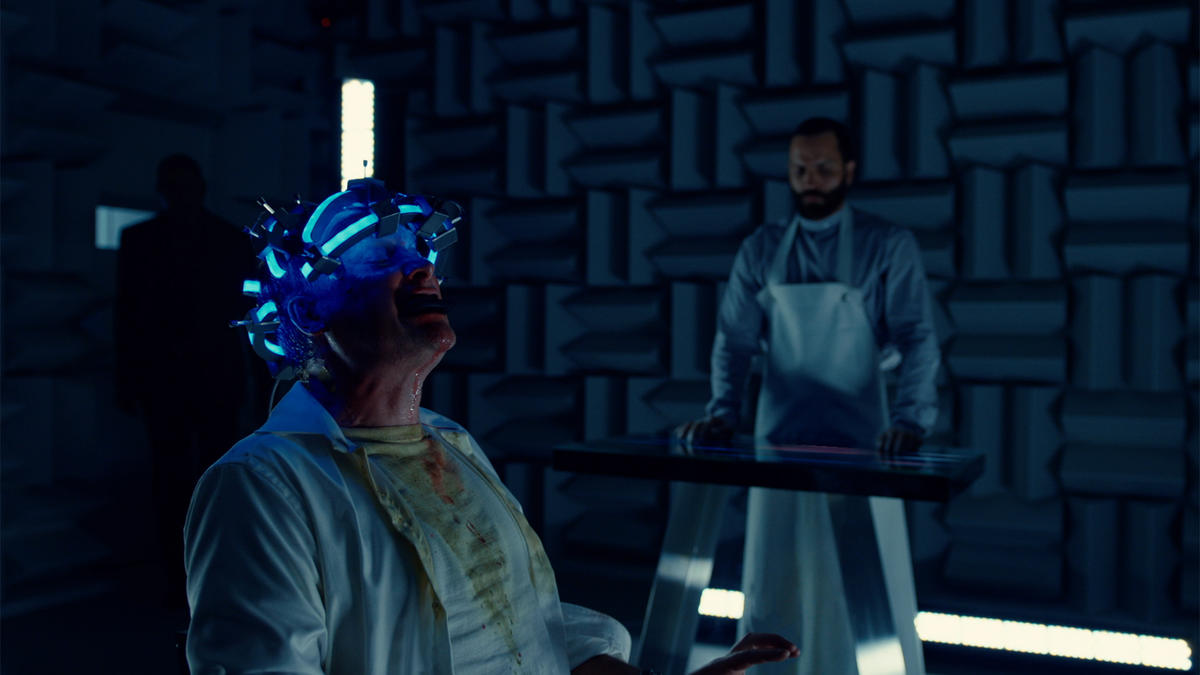 Ben is doing everything he can to cover his tracks and hide his unauthorized tech containing all of his Elena and hacked SPIGA information. Ben is able to slither his way out of almost every roadblock that is thrown his way. He is able to put all of the blame on Chad, hide his unauthorized tech under a table, explain why he checked out that vomit inducing sound gun and so on. But I there is something about the way that Ben does all of this, like his “ I am innocent nice guy thing” that really irks me. First of all, every time Ben is nervous he basically just looks constipated. He looks like a sweaty, constipated, uncomfortable mess. When Ben does not come off looking constipated, he comes off as a smug jerk. He has to get better at balancing the “I am so smart and have an answer for everything” with “I am innocent and a nice guy” to make it more believable. I do not think I am going to end up liking Ben. He is too self-important. He is one of those guys that tells himself that he is not a bad guy for doing all of this bad shit because it is for the greater good. But the thing is, it is not for the greater good. He is doing this to save one girl, and in the process ruining the lives of so many people around him.

Chad’s family and Ben’s wife Laura are just a few of the lives that Ben is destroying in the process. Chad’s betrayal of Spiga has also placed suspicion on his wife and children and they too are brought into custody. This hits Laura especially hard, even though she is not friends with Chad’s wife Fiona. I am still not really sure why Laura is taking this so personally, but I will chalk it up to her being a good person (unlike her husband). She takes it upon herself to find a way to save Fiona and her family, but even after exploiting her relationship with her mother (by using her potential baby as a bargaining chip) there is little she can do to help. The best deal that Laura could get for Fiona was to have her children adopted by a family in the Green Zone and never be able to see or contact her kids ever again.

So yay, the future looks fun! 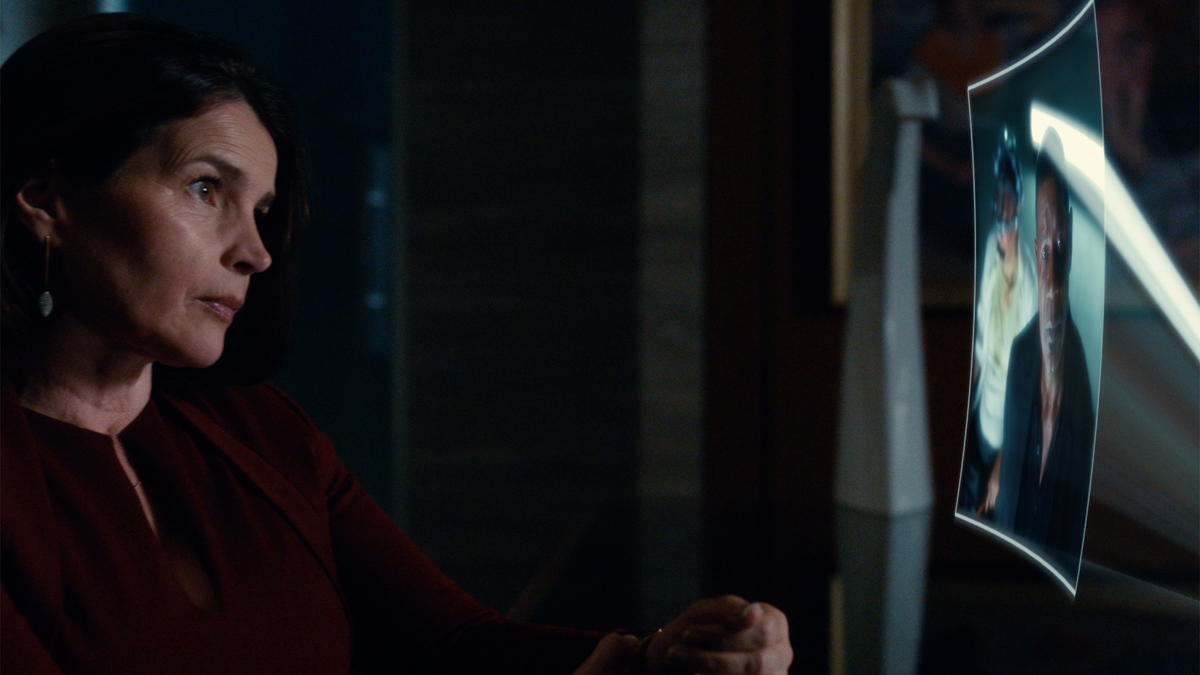 The most interesting part of Chad’s interrogation/torture was to watch the dynamic and tension between Elizabeth Kraus (Laura’s mom/Head of Spiga) and Julian (head of Spiga Security). Julian is the head of security, his main goal is to ensure that Spiga is protected no matter the cost and until this incident he believed Elizabeth was on the same page as him. The involvement of Ben changes everything, though. As much as Elizabeth says that she will treat Ben as she does every other employee, you know she won’t. I am not sure if this is because she has a soft spot for him, or she senses his duplicitous nature and is playing a long game. Either way, her treatment of Ben is causing Julian to question his boss and her motives. and this reaches and this is sure to have repercussions moving forward. The biggest disagreement that these two have is whether or not to terminate Chad’s non-disclosure agreement (NDA). While Julian is adamant that they continue interrogating Chad until they get to the bottom of his betrayal, Elizabeth wants the chaos of Chad to be put behind them. So, Elizabeth goes behind Julian’s back and terminates Chad’s NDA, against Julian’s wishes. “What does terminating an NDA in 2074 entail?” you ask? Well, it consists of completely wiping away a person’s memory. Okay, so I kind of feel bad for Chad now. Maybe I’m not a heartless monster after all.

At the end of the episode, we learn that uber creepy Roger, who is also Ben’s rival is in possession of Ben’s secret drive. That is important and all, but my main takeaway from the final scene of the show was how disgustingly creepy and gross Roger is. This look at this guy, he is like the 80’s blonde preppy bad boy who grows up to be a serial killer and possibly president of the country. 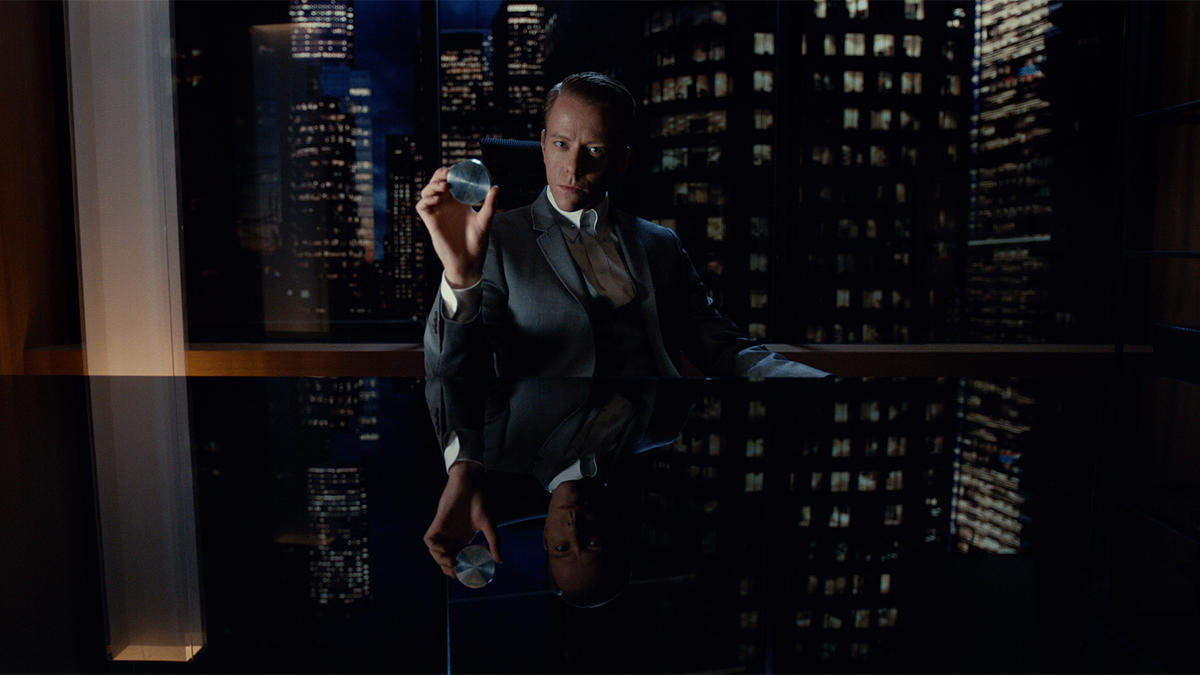 Previous article
Humanity Takes Its Last Stand in the ‘War for the Planet of the Apes’ Trailer
Next article
‘Rogue One: A Star Wars Story’ Review: First Star Wars Spin-Off Exceeds Expectations