Review: It’s no ‘Green Lantern’ but ‘Deadpool’ is alright, I guess

Hey, you. Are you over 18? Then go see the superhero romantic comedy, Deadpool.

Okay, fine. I’m being told I have to write a review longer than 16 words.

I realize that Deadpool is a more niche film than any of the other superhero films released in recent years, but if you like dirty humor and poop jokes like I do, do yourself a favor and go watch and have a giggle, mate.

Deadpool isn’t a perfect movie by any means. I know there are critics out there chiding the crass jokes, the flashbacks, the rote plot and character development, but you know what? Fuck that noise. Deadpool is good, disgusting fun. I haven’t laughed that hard in a movie theater in years. And I saw Jupiter Ascending opening night.

Not every movie has to be pretentious Oscar bait. We’re not all into watching Leo getting mauled by a bear. Sometimes, and I know I’m stepping out on a limb here, you go see a movie for, oh shit, what’s that word? Oh, right. Entertainment. Deadpool will entertain your pants off and then give you a nice gentle squeeze for good measure. You’re not going to see Deadpool because you want to have some grand revelations about the world or to experience the pain of the human condition. (Though there are moments that really make you feel for Deadpool’s character, so there’s that.) You go to see Deadpool because you want to laugh, you don’t mind a little murder in an imaginary world, you like shoulder pads, and you really like WHAM! 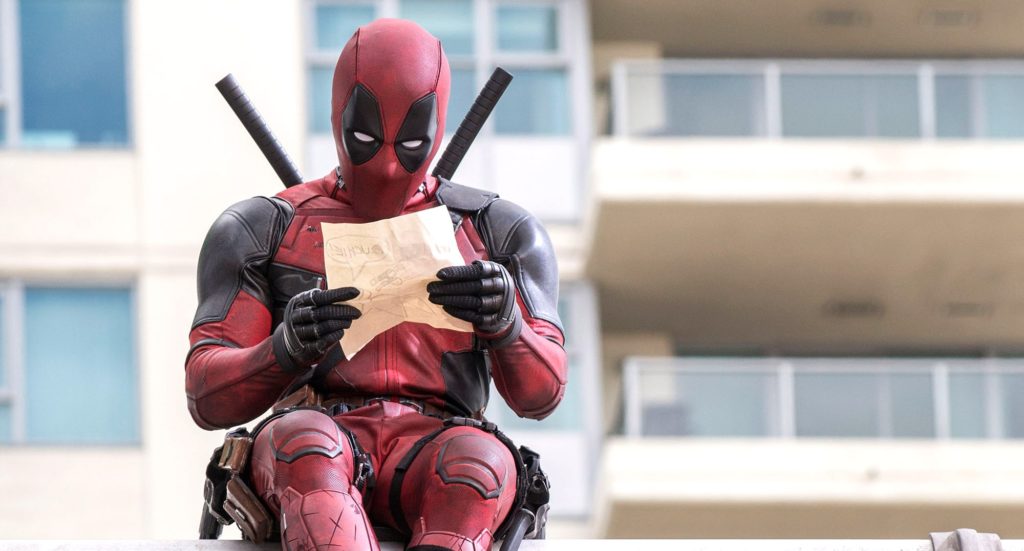 “But Jennnnnnn,” you whine, “what’s it about? I thought you had a review outline you pretend writers were supposed to follow?”

Look whiners, you know what Deadpool is about. We’ve all seen the trailers narrated by the great philosopher and poet, DMX. Deadpool follows the main character Wade Wilson (RyRey) as he fucks his way through life and love only to get cancer EVERYWHERE. It’s a mess, so Wade leaves super hot girlfriend Vanessa (Morena Baccarin) and goes to a back alley where a guy’s selling superpowers and he orders one body without cancer, please, and then he becomes Deadpool. It has revenge, romance, a fully leveled Bloody Mess perk, and it’s beautiful.

Bonus: RyRey looks like my fingers after I’ve been in the bathtub for 6 hours because I’m avoiding all adult responsibility. What can I say? That pruny look’s a turn on for me.

Speaking of RyRey and reprising his role from Wolverine: Origins, he’s perfect as Deadpool. Only RDJ’s Tony Stark comes close to embodying his superhero counterpart. It’s apparent in every scene that Reynolds and the rest of the crew had several dollars worth of fun making this movie.

If I had one qualm with the film it would be that I wish I hadn’t seen any of the trailers before going into the movie. Sure, most of the really R-rated jokes were left a secret but going in I felt like I’d already seen a significant portion of the movie out of context. Most of the bridge scene was put into the trailers so by the time that came around, I’d heard all the jokes before. But I can’t blame the film for a marketing issue and my lack of restraint with watching trailers.

I could spend all night trying to convince you this movie is worthwhile, telling you that the leads had great chemistry, the Stan Lee cameo was top notch, that it actually has a better love story and heart than most romantic comedies, and it definitely earned that R-rating. I could try to tell you that the action and choreography was well done and most certainly over-the-top. I could tell you the addition of Colossus and Negasonic Teenage Warhead and all of the X-Men references were surprisingly the best part of the film.

I could tell you–okay, I don’t have all day here. You catch my drift. Deadpool is a fun 2 hours worth your $10. Happy Valentine’s Day!