Netflix debuted Enola Holmes this week and it’s a quirky adventure that both teens and adults can enjoy, albeit with some lingering questions.

Based on The Case of the Missing Marquess (the first novel in the Enola Holmes Mystery series by Nancy Springer) with Millie Bobby Brown (Stranger Things) playing Enola, younger sister of Sherlock (Henry Cavill) and Mycroft Holmes (Sam Clafin). The film quickly explains how the main character doesn’t really have a relationship with her elder siblings mainly living with her mother in the country. Enola had an unconventional upbringing where Eudoria (Helena Bonham Carter) made certain she knew history and literature, but also had skills in tennis, painting, ciphers, jujutsu, and much more. But she does not know how to embroider. Scandalous.

Mother and daughter were very close but on Enola’s sixteenth birthday, the elder woman vanishes only leaving her child a set of handmade flower cards with the instructions to use them wisely. She calls on her brothers for assistance, but the situation goes from bad to worse with Mycroft planning to send her to finishing school to become a proper young lady. One of the central themes of the film is choice and Enola decides to locate her mother on her own.

She soon finds herself embroiled in the affairs of young Viscount Tewkesbury, the Marquess of Basilwether (Louis Patridge). At first he appears to be just another young nobleman wanting to escape the pressures of his family’s expectations by following his own desires. However it becomes apparent that someone has hired a killer to end the marquess’s life and there is more to this situation than meets the eye.

Enola is shown to be quite adept in sleuthing just like her older brother Sherlock as she is able to get leads on her mother’s motives and plans having remembered clues in the elder woman’s correspondence and secretive meetings with other women. It takes gumption to venture out on her own and while the housekeeper and her brothers think she is terribly naïve, Enola proves that she’s able to fend for herself in the big city of London where she’s gone to find Eudoria. 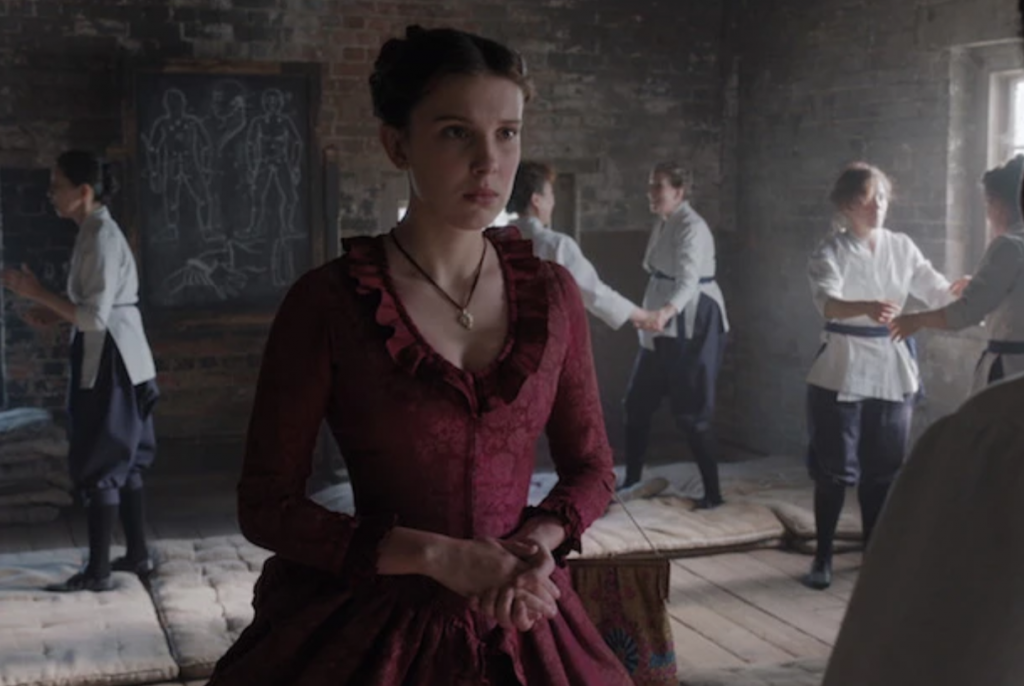 Faced with two mysteries, Enola ends up making the hard choice to help Tewkesbury realizing that there were bigger issues at stake and locating her mother would have to wait. This greater issue was that the death of this particular aristocrat would have an impact on a reform bill that was going to be voted on in the House of Lords. While the film never explicitly says what the bill is about, there’s implications that its related to voting rights. This may be Third Reform Act of 1884, which extended voting rights to the countryside where in all men who owned property that valued at £10 or rented property at an annual cost of £10 were eligible. Enola comments to Tewkesbury at one point when they return to his ancestral home devoid of servants that this was the future. This would have impacted many commoners and allowed them a voice in the political system.

This would make sense as we discover that the true mastermind behind the plot to kill the marquess is the young man’s own grandmother, the Dowager Countess of Basilwether. In one scene she discovers Enola in the woods and explains how tradition is the only way for the country and they must protect it at all cost. The elder aristocrat even admits that both her son and her grandson are progressive thinkers which she clearly disagrees with.

Speaking of the Dowager, one of the most interesting things about the film is its female characters. There are those like the noblewoman and headmistress Miss Harrison (Fiona Shaw) who are staunch traditionalists with very rigid views on women and their place in society.

To contrast, Eudoria’s disappearance is surrounded by a militant suffragist movement with Enola discovering her mother’s dangerous plans involving bombs and gun powder. She meets one of the older woman’s associates, Edith (Susie Wokoma), who worked at a tea shop with a jujutsu dojo on the second floor. Edith has a conversation with Sherlock who informs him that he has never experienced a world without power that’s why he’s not interested in politics. Other people do not have the luxury. The secret group that both women are a part of clearly want change and are willing to do what is necessary to get it. Eudoria has seemingly chosen a precarious path and by the end of the film Enola finds her own way, distinct from any of her relations. Mother and daughter do meet again and we while still don’t really know what the elder woman is planning, the younger seems to have accepted that particular mystery will remain unsolved.

Enola, while progressive is more in the middle. She doesn’t necessarily agree with her mother and Edith’s more radical way of thinking, but she also believes that women are more than embroidery and eating soup a particular way. Enola is smart, witty, gifted, and wants more for herself than to be married off to some man. At the same time however, her conversation in the forest with the Dowager revealed that she still saw beauty in traditions.

Enola Holmes is a coming of age story where the main character is able to overcome numerous obstacles via siblings, finishing school, killers, and societal expectations to forge a life that is hers. While she could have become Sherlock’s ward or gone to live with Tewkesbury and his family, Enola chose to remain independent and live on her own accord.

The film reminds viewers that the future is up to us and now is an important time to heed the message.

With six novels in the book series, this may not be the last we see of the young detective and perhaps we’ll discover what the suffragettes are planning, what becomes of Enola’s new life in London and will she continue to evade her brothers? Time will tell.