I think Alan Tudyk is inhuman. An actual living breathing alien from another planet, rather than accepting the fact, that perhaps he is just this good of an actor. There’s a subtly to his conviction. Whether it’s in I-Robot, Star Wars, Harley Quinn, or Doom Patrol, this Julliard thespian knows how to put on a stellar performance, creating such timeless and heartfelt characters that, somehow, withhold just the right amounts of humanity. Precisely stripping something at something essential. Like a living, breathing, tinman. There’s a calculated and methodological withdrawal that makes Alan Tudyk very gifted at portraying characters that are, ever so slightly, convincingly inhuman. Which tremendously in his new show, Resident Alien.

What Is Resident Alien About?

Based on the popular Dark Horse comic series by Peter Hogan, Resident Alien follows the story of a stranded space alien (Alan Tudyk) who poses as a small-town doctor in Patience, Colorado.  Taking on the identity of Harry Vanderspeigle — a vacationing physician whom his characters murders and assumes his identity — this new Harry/Alien Tudyk, is tasked with helping the nearby townsfolk, as he’s the only physician standby. Having no choice but to try and maintain this false identity while secretly searching for pieces of his wrecked ship to rebuild and return home. What results is the budding of a procedural science fiction drama that’s equally silly as it is serious, as Harry holds a pretty dark secret.

I’ve been covering Resident Alien since its announcement both at NYCC 2019 as well as its most recent developments at NYCC 2020. Mostly, because we’re pretty big fans of the SYFY network here at TheWorkprint. But Personally, I’m also a big fan of Alan Tudyk. Especially in regards to his ConMan TV series, which I wholeheartedly consider, the best digitally self-produced web series ever made. Suffice to say, though I was impressed with the Resident Alien pilot debut back in 2019, I’m even more impressed with it in 2021.

From what I gathered, the pilot and the series, on the whole, have only gotten better in quality over the years. The design work of both the alien prosthetics, CGI, and spaceship, are beautifully constructed (especially, when compared to the greenscreen tennis-ball and metal awning days) and from what I gathered, the extra time spent developing the show seems to have only helped both the writers and actors find their chemistry.

There is both a direction and pacing here atypical of a series’ first season. The show seems sure of itself, and the pilot is a pretty great set-up for a procedural comedy-drama. In many ways, I think Resident Alien is sort of like the show Lucifer except, instead of a calculated and confident devil, we get a clumsy, awkward, and slightly homicidal space alien played by Alan Tudyk. 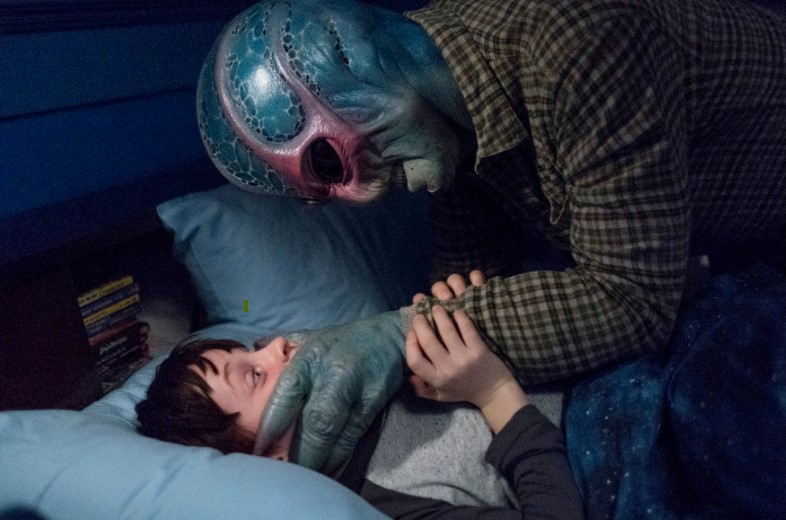 RESIDENT ALIEN Pilot Episode 101 Pictured (l-r) Judah Prehn as Max Hawthorne, Alien Harry (Photo by James DittingerSYFY)And when I say Tudyk excels at playing an alien in this series, I don’t mean his colorful reptilian child-terrifying form (seen above). No, what really sells the role is Tudyk’s portrayal of the human-in-disguise character, Harry. A physician that used to run a pathology lab at Rutgers (my alma matter which I had to mention!). Harry is a creature still becoming accustomed to being quite literally in his own skin. All in awkward attempts of desperately trying to fit in to keep his cover. As a result of his profession and reluctant situation, Harry the alien accidentally often finds himself helping other humans. A prospect which he detests shown over voice-over throughout the series, as he views our species as greatly inferior.

Many of the jokes in Resident Alien derive from Harry’s greater-than-thou perception of the human race, which works in a Mork and Mindy kind of way. And if the prospects of an awkward Alien Tudyk entices you, the pilot episode alone has moments of Harry jiving to Nicki Minaj‘s ‘Starships‘ after a couple of rounds of whisky shots with Asta and D’Arcy the hot bartender, playing silly putty with a human brain during an autopsy, and having to Google search the meaning is behind the word “douchebag” (with a follow-up image search of what a human taint is shortly after).

Atop of this, there are also brilliant moments of uncertainty as to whether or not Harry is actually good or evil. It’s a diabolical naivete style of comedy reminiscent of early-season Stewie from Family Guy. Which makes sense, given that Resident Alien is being showrun by Chris Sheridan, the longtime writer and producer of the long-running Fox series. Having talked with Chris two years ago, you can immediately tell that he was excited to be developing his own TV series, and the fruits of his labor bloom everywhere here in this pilot. It was also rather evident how great of a relationship he’d developed with his cast, letting them showcase their own talents and skill.

Finally, I’d be remiss to neglect to mention that the supporting cast that we’ll soon get to know have been nothing shy of stellar. Sara Tomko plays the heartfelt Asta, a part-Native American woman from a troubled past that’s as equally caring as she is intimidatingly strong. Interviewing her last year was a delight, as she’s taken a seriously cultured yet sentimental approach to her role. I will wholeheartedly admit, Asta is hands-down a favorite character of mine in the series (I’ve seen the first seven episodes as of writing this).

Alice Wetterlund, who plays the wild but funloving D’arcy, is the kind of spirit I personally missing hanging out with at the bar. A zany comedic and in-your-face wild child unafraid of supporting her friends or calling it like it is, often in hilarious fashion. Though she’s not prominently featured in the pilot, she is featured heavily in the rest of the series and I do think she’ll have her own fan club the more that the show takes off.

Corey Reynolds plays ‘Big Black’ Sheriff Mike, the small town policeman whose tough attitude is often overshadowed by a strangely geeky demeanor. Reynolds — who is an actor originally from Broadway — utilizes some free reign on his character development, even showcasing some of his surprisingly talented beatboxing in the pilot episode.

Finally, there is also his deputy Liv (Elizabeth Bowen), who is sweet yet also an incredibly skilled police officer, and who often serves as a great foil to Mike’s character this season. She is also, like the best characters in these ‘everyone’s in on the joke’ sitcoms, the most sensible person throughout the series.

Overall, this pilot episode is both a rather funny and heartwarming introduction to the series. Without spoilers, I’ll also mention that the twist in the end really throws a wrench into everything, adding a funny hook that makes for great tension throughout the series. Again, I can’t stress enough, through years of development, this pilot has only gotten better over time (third iteration watching it), so definitely check out Resident Alien, if you can. I’ll be reviewing every single episode this season.

Previous article
Alan Tudyk on What It’s Like Playing The Alien in SYFY’s Newest Series ‘Resident Alien’
Next article
‘A Discovery of Witches’ Season 2 Episode 4 Review: Trouble Brews in the Present