Pretty Little Liars’ “She’s No Angel” had quite the unusual start.

Spencer is walking around a creepy basement, where she watches a Maddie Ziegler do a super creepy dance in a room with a bunch of creepy bathtubs. The dance, which was choreographed by the one and only Travis Wall, was incredibly bizarre and chilling. If this is what the inside of Spencer’s brain looks like, no wonder she needed pot-cookies. When Spencer tells Aria about her dream the following morning, Aria provides no emotional support. Aria is trying to compartmentalize (aka suppress) all of her emotions from the dollhouse in order to survive. Having Spencer rant about the girl from the Chandelier music video dancing on top of bathtubs is not really helping. I should note, Spencer is nibbling on her edibles during the entire phone call.

Spencer decides to go to school that day, and gets called out by Hanna (the only other liar attending classes) for being high. This prompts her to attend an NA meeting. Actually, I am not sure if she went because of what Hanna said or if she had a bad case of the munchies and really wanted some free snacks. Her former drug counselor (who was previously fired by Mrs. Hastings) is also at the meeting, and offers Spencer a ride home. The two have a heart to heart and Spencer decides to be sober again and hands away her special pastries. Well, sadly, I think that may be the end of the stoner Spencer storyline. 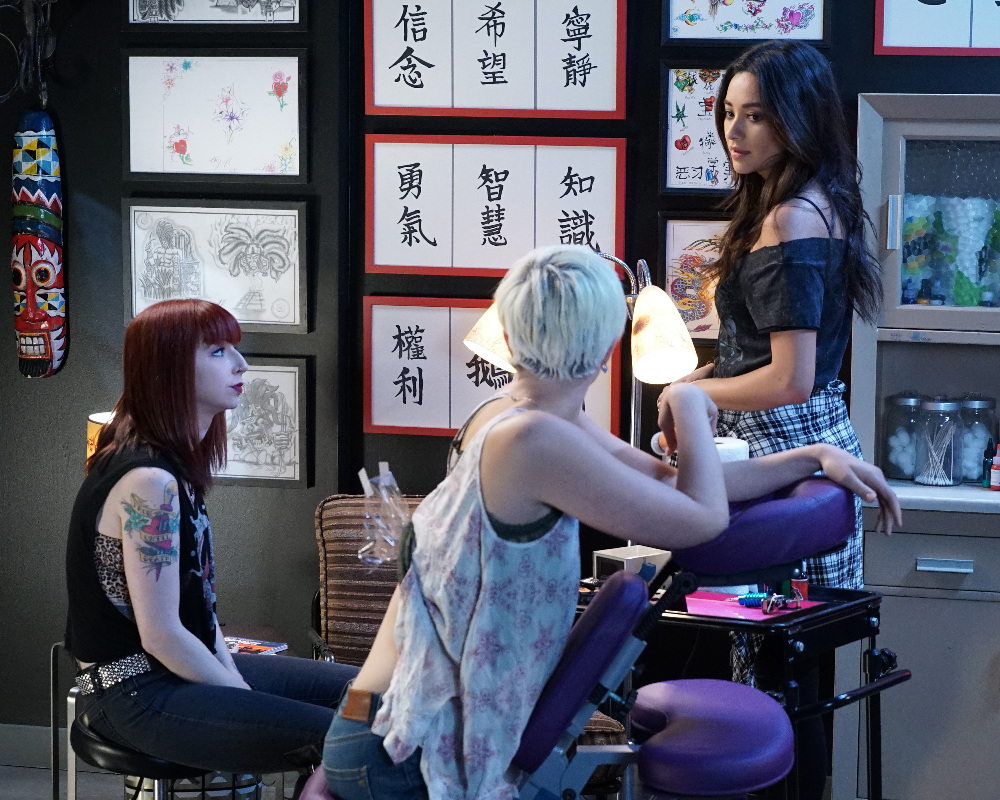 After a phone conversation with her drunken mother, Sara announces to a freshly showered Emily that she needs to move back home. Emily flips a shit and convinces Sara to get emancipated so the two of them can forever be in lesbian together. Emily brings Sara to Rosewood’s foremost expert in the emancipation process, seventeen year old Caleb Rivers. Caleb starts laying down the hard truth; emancipation is not for the faint of heart, and maybe Sara should just wait out living with her mother until she turns eighteen. Emily sternly tells Caleb that Sara has waited long enough and every moment is precious (read: every moment that Sara sleeps in my room is precious so don’t fuck it up Caleb!) Caleb correctly reads Emily’s subtext, and offers Sara a job at his new web design company.

Sara goes to goes to Pennsylvania Child Services, conveniently located in Rosewood, and learns that she can live with Emily until she gets emancipated. Next, they do one of the dykiest things ever and get tattoos together. The fact that the two do not get the same tattoo in the same location allows this not to be an L Word lesbian move. Sara gets a tattoo of a captured dove flying from a cage in the middle of her back, while Emily only gets a Japanese symbol on her hipbone.

Hanna wakes up to an uninvited Mona sitting in her kitchen, who is wearing ridiculously oversized sunglasses. Mona is freaking out that Ali may want payback for the whole framing her for Mona’s fake murder thing, and begs for Hanna to accompany her to the police station. Before heading to the precinct though, Hanna and Mona make their obligatory stop at The Brew, where the two run into Leslie. Leslie rips into Mona for forcing Leslie to take the stand and defend/lie for Mona under oath which consequently ruined Leslie’s life. Later that night Hanna meets up with Leslie at The Brew (you would think that a commercial entity would have claimed The Brew at this point), and Leslie apologizes for being rude to Hanna. She does not apologize though for calling Mona a life-ruiner, and then ominously warns Hanna about digging up skeletons at Radley.

Spencer somehow forces Hanna to break into the abandoned Radley to try to find files on Charles DiLaurentis. I do love how much time Spencer and Hanna are spending together this season! They really work well off of each other and create great scenes. While wandering the halls, Spencer happens to see a poster of the dancing girl from her dream, and subsequently walks into the room of bathtubs. The room from her dream wasn’t from the Dollhouse, it was from Radley!! Luckily for the pair, the bathtub room is also the ‘former patient records room,’ and they are able to dig out reports confirming that Charles is indeed dead. 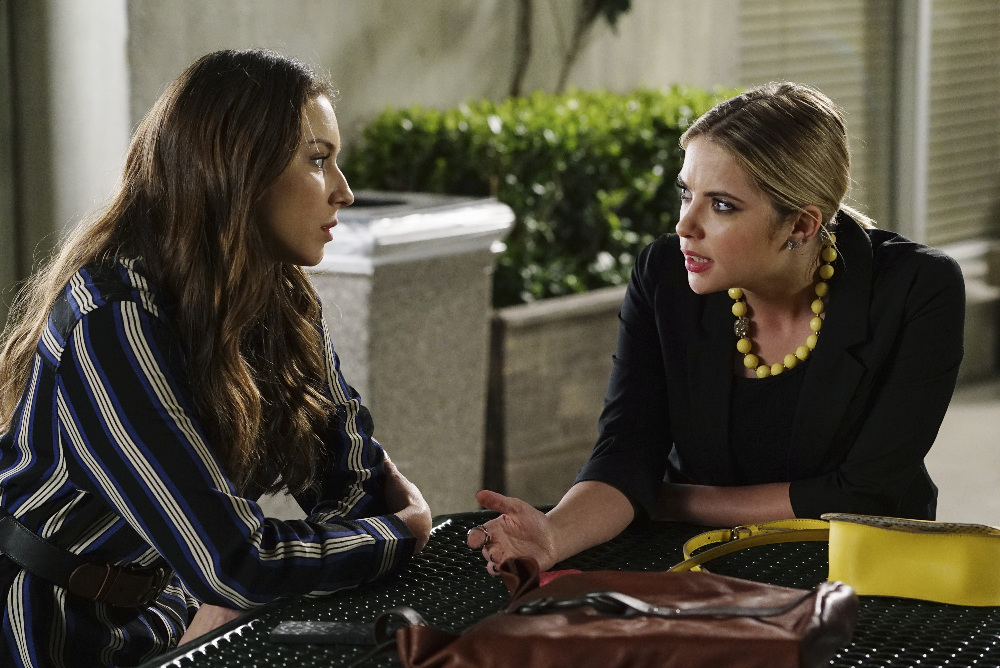 A moment later though, Hanna accidentally knocks some folders into one of the bathtubs and sees a few limbs floating around. Spencer grabs an IV pole and fishes a Resusc-i-Annie out of the bacteria filled sitting bathtub water. Phew, it was not a dead body. Now we at least know that they taught CPR at Radley. Hanna wants to get the fuck out of the bathtub room, especially because creepy noises are coming from above, but like a young Jack Terrier, Spencer can’t stop digging for clues. Hanna finally convinces Spencer to leave, and on the way out they run into Mona, the girl who ditched navigating Spencer and Hanna through the Chamber of Secrets because apparently, her mother said so. Mona had come to Radley to steal Leslie Stone’s Radley file, meaning crazy Leslie Stone was once in Radley! This actually makes me feel better because the fact that Mona and Leslie met in a mental institute makes more sense then the two meeting because Leslie complimented Mona on her Dolce and Gabbana stretch pants.

The big reveal though is that Leslie was once a Radley patient. Not just any patient, but she was committed for so long that she knew both Mona AND Charles. She was even Bethany Young’s (the girl buried in Ali’s grave) roommate while in Radley! If you heard the idea bell above Spencer’s head ringing, then you heard right. It is fair to say Leslie is Spencer’s new suspect. Mona calls Leslie to tell her about her files being found, and she literally flips a shit.

Aria is hanging out in her dad’s office doing homework for classes she no longer attends when Clark, the Warbler photographer, strolls in and invites Aria to come take photos in a junkyard. Aria, the wise young woman that she is, decides going to an abandoned junkyard off of Route 47 with a near stranger is the perfect thing to do while the person who kidnapped and tortured her is still on the loose. In Aria’s new attempt to “embrace the creepy,” she manages to find every creepy doll in the junkyard and take photos of them. While shooting images of a doll whose head just fell off, Aria notices a black hooded figure lurking in the junkyard.

Later, while developing the film in the dark room, Aria realizes Clark was able to snap a shot of A. She calls Emily to ask what she should do but Emily has no time to worry about finally learning who A really is, Emily just wants to help free her boo.

Aria gathers the Liars together to examine the bust size of A. Hanna declares that the boobs prove that A is a female and that as the bust expert, those are definitely Leslie Stone’s . Because Emily does not want the lesbian fandom to attack her, all she will say is that those are most definitely not Paige’s or Sara’s breasts, and as a proper lady she can say no more.

In other random news: Ali and Lorenzo

Ali is basically on house arrest this week. She has two patrol cops who talk shit about her right outside her window, and her dad gets mad at her for sitting on the front porch to get some air. Suffice to say, Alison is not having the best of weeks. Her day is slightly brightened when Officer Lorenzo stops by to discuss the upcoming youth outing that he is planning. Ali tries, again, to explain to Lorenzo that the parents of Rosewood will not be keen on the idea of having the town’s pariah leading a nature walk. Just as sparks start to fly between the two, Mr. D walks in and kicks Lorenzo out. Lorenzo later comes by and they kiss. Surprisingly, I am not incredibly annoyed by this storyline, and it is nice to see the soft side of both these characters.

Quote of the Week: I could not just pick one this week:

Leslie: Really, you think I actually wanted perjury on my resume?
Hanna: I don’t know what that means, but I don’t like your tone.

Hanna: First your texting Toby like some dog in heat, and then you’re gumming at your dessert like my grandma.