Last week on Pretty Little Liars the Liars were trying to adjust to their post-kidnapped/torture life, while their family members tried to comfort them.

The girls are on a tag-teaming phone call discussing the pros and cons of heading back to school that day. Hanna is the only Liar adamant about going back. While school is not her thing, this is not surprising since Hanna’s coping method usually involves taking control of a situation. And in this situation, she has control to ease back into a normal routine and attend school instead of staying home to mope. Even though the other Liars say they too will attend school, all three of them bail, leaving Hanna all alone. While walking into school by herself, Hanna runs into her former therapist Dr. S who is now a counselor at the school. Dr. S tries to convince Hanna to come to a session, but Hanna feels that therapy would only be beneficial if all of the Liars were present. So Hanna goes on a quest to collect the remaining Liars and cash them in for a therapy session. 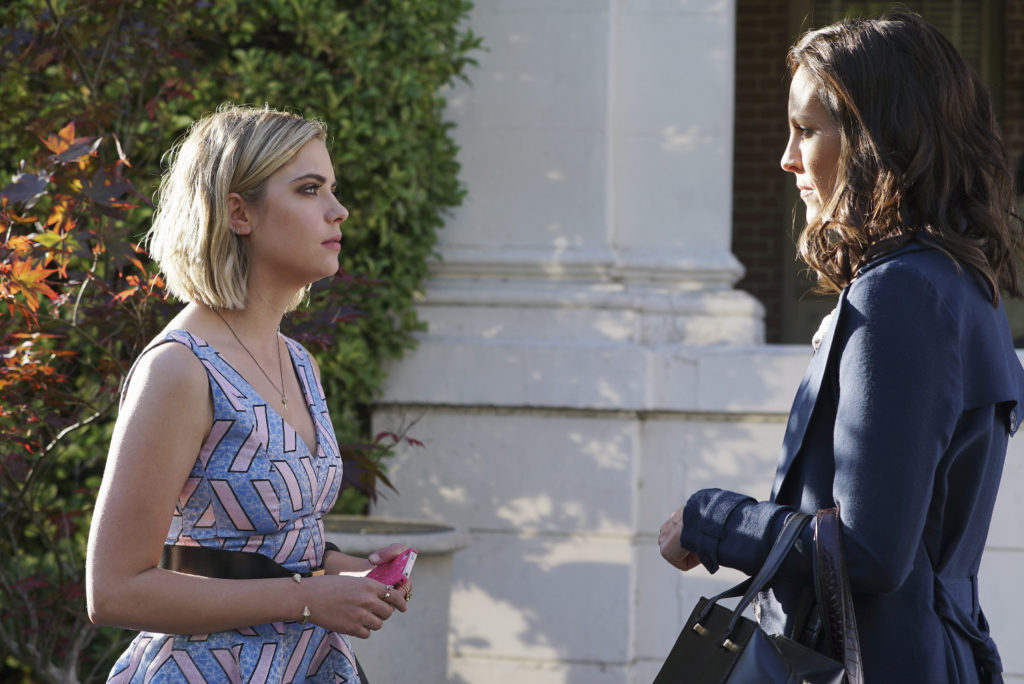 Over at Em’s house, Sara has spent the night after her impromptu midnight visit. She walks back into Emily’s room after her tenth shower of the day, and I truthfully cannot tell if she looks like she is 15 years old or 30.

Sara realizes that at some point, she will probably have to go back to school, but she is scared because all of Rosewood considers her to be a feral animal. Emily assures Sara that she is not feral, she is just a lost puppy in need of some grooming. When Emily goes to stroke Sara’s cheek, Sara retreats like a feral animal. Emily takes Sara’s jumpiness as a sign that she should stay home from school and chill with Mama Fields and Sara for the day. After breakfast, Mamma Fields and the girls are lounging in Emily’s room and the horrible nature of Sara’s mother is further explained (aka chucking all of Sara’s shit to build a new yoga room). Her mom’s behavior is also the reason Sara ran away from home. Mrs. Fields is horrified by the actions of Sara’s mom, and offers Sara to keep anything of Emily’s that fits her. Except for flannels. ALL FLANNELS STAY WITH EMILY!

Later that night, Emily comes home to find Sara transformed into lesbian of the year, sporting a Justin Beiber haircut and wearing Emily’s old Shark sweats. Emily can’t figure out if she is freaked out or turned on.

Aria is spending her morning at The Brew, which obviously means that Ezra is going to interrupt her with some pretentious quip. Channelling his former educator self, he advises Aria to skip school and spend the day in the back of The Brew writing about her experience of being tortured. Aria tells him yet again to fuck off with his writing suggestions, but takes him up on playing hookie for the day. Ezra comes up with yet another brilliant idea. He and Aria should call the local hospital/doctors office posing as Rosewood PD to gain intel on Andrew which includes obtaining his Social Security Number. There should be so many issues with this plan. First, why would a detective be calling a physician to obtain medical information on a criminal? Wouldn’t it be the prison nurse/doctor. Second, Rosewood is not that big. At this point, wouldn’t the sole hospital be familiar with who the cops are in the sole town Police Department? Third, did Ezra really ask for the hospital to give out a patient’s social security? The man is already arrested, you should have that information.  To my relief, there are some residents of Rosewood that loosely follow HIPPA laws, and they do not reveal any health information to Ezra. They do tell him though that the date and location of Andrew’s birth is locked in a vault in the center of the earth due to his adoption. Aria takes the news of Andrew being adopted as a sign from Heaven that he is indeed Charles/A. 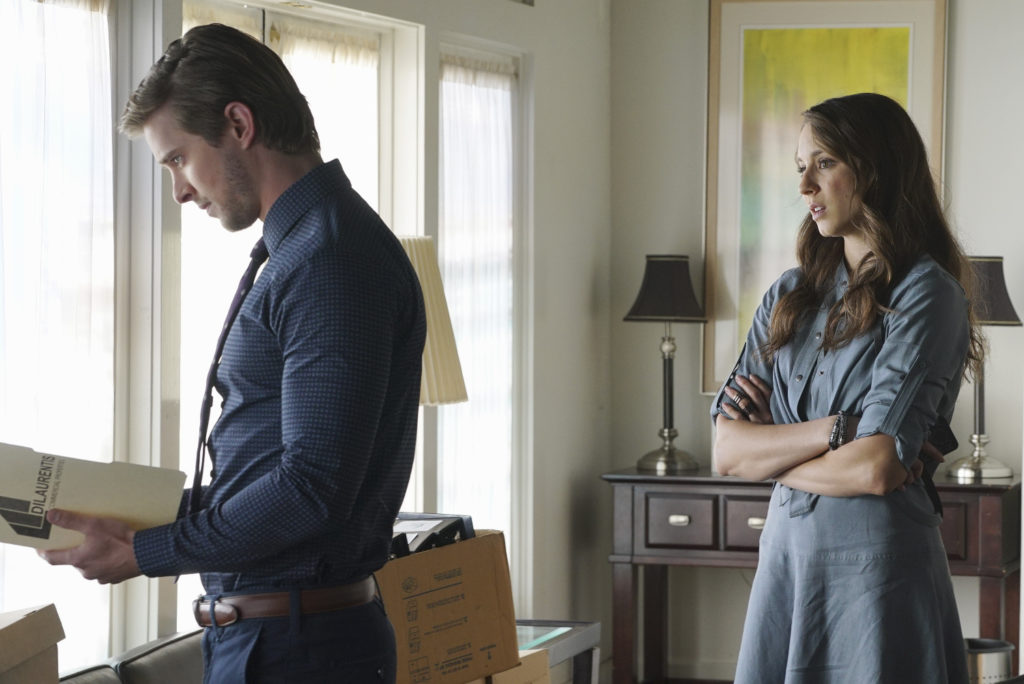 Toby is over at the Hastings estate and tries to convince Spencer to warn Ali off of his new partner Lorenzo. Toby witnessed some Lorenzo/Ali chemistry in town earlier that made him uneasy. Through a cafe window, Toby observed Ali lightly tap a soccer ball back to Lorenzo. Lorenzo was so overwhelmed with Ali’s ball handling skills, calling her a young Megan Rapinoe, and begs her to be the new Youth Leader for the girl’s soccer group. Ha, yeah, like the moms of Rosewood would ever be okay with that. Toby relays this scene to Spencer and asks her to keep Ali on a leash because she is the devil and all bad things happened because of her, and she will never change.Toby has become so spectacularly boring this season, I have a hard time even watching him on screen. Spencer mulls over Toby’s request and instead talks Ali up to Lorenzo when they later meet.

Spencer leaves Toby’s delightful company to gently interrogate Jason about the seemingly nonexistent Charles DiLaurentis. While Jason cannot recall anyone of that name, he does remember his childhood imaginary friend Charlie, who his father sent away when he was younger. Spencer thanks Jason for the intel, feeds herself some scooby snacks and races to the other Liars.

Hanna, Aria and Emily are at Dr. S’s office waiting for Spencer to arrive. Spencer barges into the waiting room and spews out the news about Jason’s imaginary friend Charlie. The conversation is cut short though when Emily gets a facetime request the from burner phone she leant Sara. It turns out to be a video of A  standing over Sara with a knife. A threatens to kill Sara if the Liars do not leave Dr. S’s office in the next 30 seconds. And now comes the Andrew dilemma. If Andrew is in jail, and Andrew is A, how did A facetime a Scream-esque video from Emily’s room.The Liars rush to Emily’s house to check on Sara, leaving Dr. S. high and dry. Sara is alive and safe, although is suffering from dry skin due to her excessive showering. Spencer starts Nancy Drewing out, and charges to the DiLaurentis house to get some answers about Charles. After a full sweep of the house, Aria discovers an old picture of the DiLaurentis boys and it is confirmed, Charlie was not imaginary.

Back to Andrew though, due to the fact that there is zero evidence against him and he has airtight alibis for everything, he is set to be released. The girls happen to be in the town square just as Andrew is leaving the jail. Aria charges forward to confront him and wow, those few days in jail aged Andrew into a Zombie.

Andrew whines that all he wanted to do was be Aria’s saviour and knight in shining armour, and this is how he is repaid?  He leaves them with this nugget of wisdom “Other towns have nice toxic dumps. Rosewood has you.” So many thoughts on this line. First, do that many other towns really have toxic dumps? Are the towns surrounding Rosewood so full of industrial plants that they are just pumping out their toxic waste into nice toxic dumps? Also, how does one determine if a toxic dump is, or is not nice? So many questions Andrew, and so little time!

Andrew exits, and the girls are left alone. Standing there as a group, Hanna forces the girls to open up to each other about what happened while in the Dollhouse. Hanna reveals the psychological torture she had to endure. On a regular basis, Charles forced Hanna to choose one of the Liars to torture. She was scared to reveal this to her friends, because she thought she ashamed that was the reason one of her friends had to endure pain. They realize that Charles played this sick game with each of the girls, but he never physically hurt them. It was all a mind game to prove that when pushed to the limit, they girls would turn on each other.

As I said last week, this show has become fucking dark.

Hanna Quotes of the Week: “Well you’re a doctor, can’t you subpoena them?”

2)      We learn the Liars are on track to graduate in three weeks. Who wants to make bets if this means three episodes, three seasons, or well never?

Previous article
‘Magnus Chase: The Sword of Summer’ Cover Unveiled
Next article
‘Orange is the New Black’ Has Become A Prison Playground