‘Orange is the New Black’ Has Become A Prison Playground

The following post contains spoilers for Season 3 of Orange is the New Black.

Orange is the New Black is a show set within the confines of a minimum-security prison. Apparently.

The food is bland, the monotonous scheduling of walking the grounds, working a menial job, and being told when to use the bathroom is soul-destroying. Not to mention, the constant tension between inmates and guards is enough to make anyone not want to get out of their creaking, pain-inducing bed.

In the third season of Netflix’s hit show, however, none of this is the case.

Litchfield prison, the fictional home to more than 200 minimum risk offenders, is catered to audiences as a summer camp for adults. 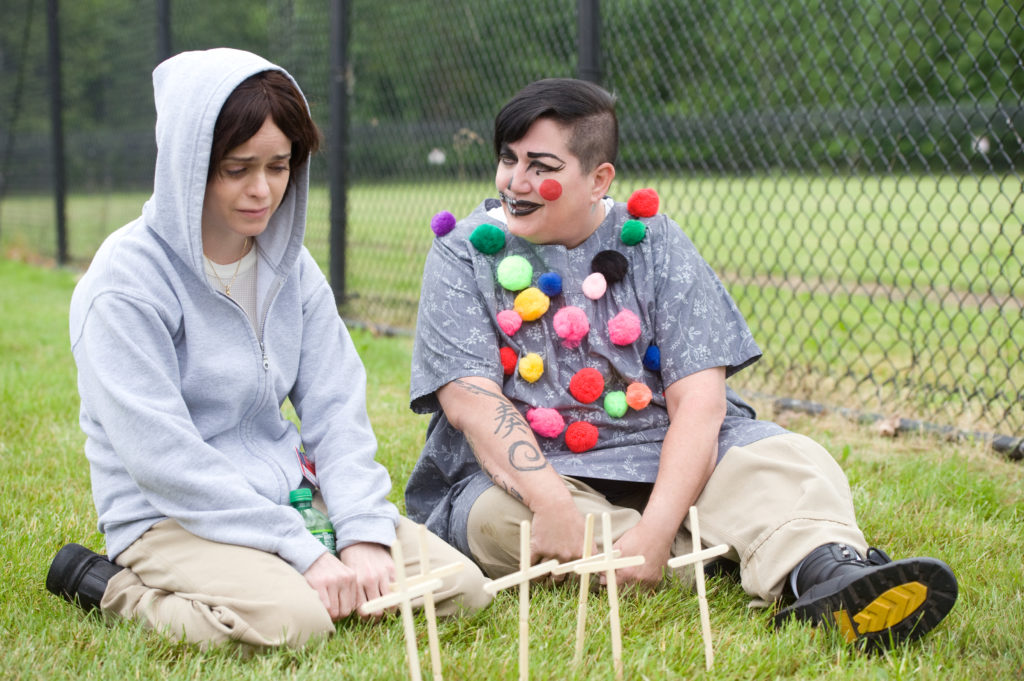 Not only is this depiction of prison life grossly inaccurate, it completely contradicts the hovering aura of the show’s first two seasons and portrays an incarcerated lifestyle that does nothing to explore the horrendous mistreatment of most women held within the U.S penal system.

One of the last scenes in the season finale follows the women as they make a run for the lake that lies just beyond the towering fences following an administrative mix-up. It’s on this secluded beach front that the inmates shed their work boots and heavy socks, pouncing into the water and jovially splashing each other. The hatred they have for each other seems to evaporate into thin air. The violent threats they scoffed at each other not even twenty minutes prior magically forgotten as they swim around the whimsical lake. Not only does it grossly contradict the rough and tough attitudes famously associated with inmates, but it forgets the foundation the show was founded on; fear.

For most of the first season, Piper’s main story arc was learning to navigate the social intricacies of Litchfield without stepping on too many toes. She may have found solace in her ex-partner turned prison girlfriend Alex Vausse, but for the most part, Piper was scared, alone, and living under a sheet of constant anxiety.

For good reason, too. Harassing guards had found a new piece of meat to dangle in front of each other while other inmates put Piper through the ritual hazing process of sizing up the fresh face slinking through the hallways, trying to go unnoticed. 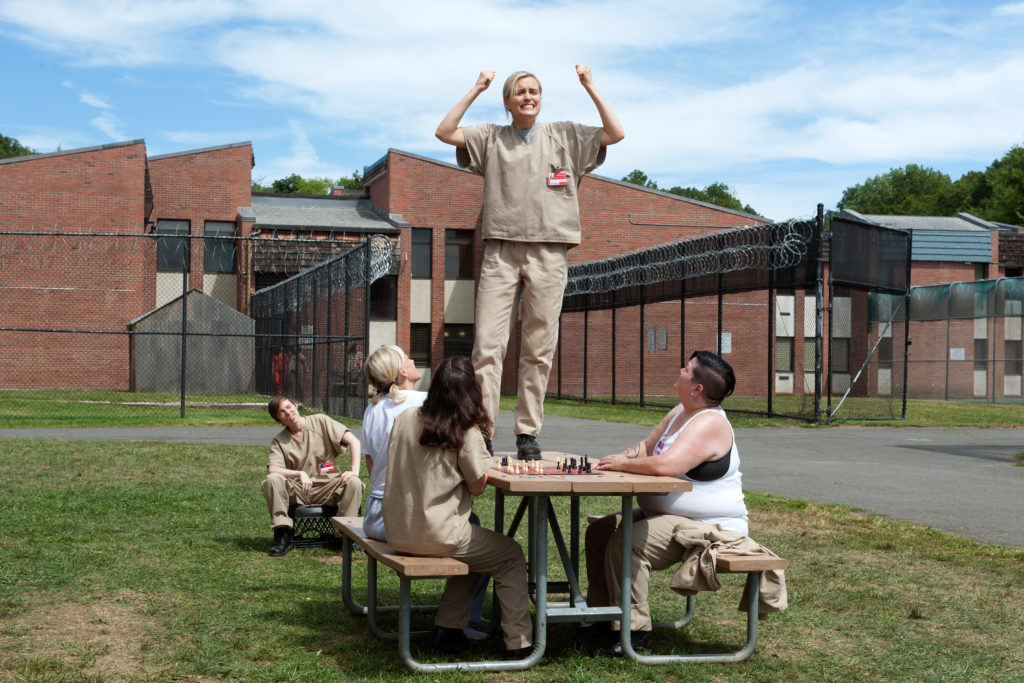 Prison is an ecosystem. There’s a hierarchy of power, the more carnivorous the predator the higher social standing they’re awarded.

Piper starts out as a blade of grass, but over the course of the past three seasons has chewed up and spit out the more ferocious dogs, taking the top spot for herself.

While the mobster mentality makes sense for someone serving an extended stay at a prison, the huddle around a campfire and roast marshmallows over spooky stories does not. Piper has become the court jester. She’s the one initiating a relationship with newcomer Stella (Ruby Rose) and the one mercilessly teasing Alex over her drawn out paranoia about possibly being killed in prison. Through Piper’s nonchalant attitude toward incarceration, it makes the entire debacle seem less contrite as a whole.

She isn’t scared anymore of the inmates she’s gotten to know pretty intimately. Instead, they’ve become like old school chums and they’re devoted to acting as immaturely as possible. In one scene, Piper jumps on top of a picnic table located somewhere on the prison grounds and nearly sings with glee as she tries to draw other women into her circle of illegal employees, wearing freshly sewn panties for a few days before getting her brother to sell them to, “perverts” online.

The scenario makes for a much more comedic show (surprising considering the series is now forced into the drama category for Emmy nominations because of its one-hour run time), but it seems reckless to turn the once fairly dramatic show completely on its head. 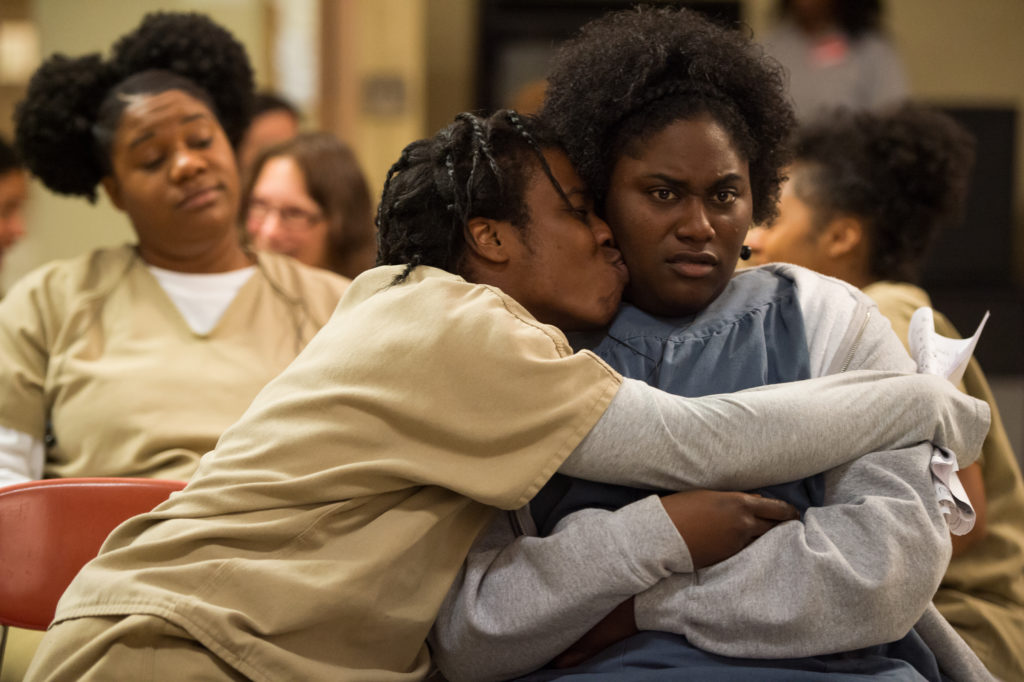 Orange is the New Black was never as grey in conundrums as HBO’s groundbreaking prison drama, Oz, but it wasn’t nearly as ludicrous as Wentworth Miller’s Prison Break.

The show addressed actual travesties occurring within the American penal system, wielding comedy like a flaming sword to keep audiences engaged and entertained. One of the most predominant themes in the third season was motherhood and the emotionally devastating affect it had on the women in prison. From the very first episode, where children are corralled into bleak hallways and mothers are hyper with joy at being able to spend the day with their children to Sophia and Gloria viciously fighting one another after their sons become friends and walk down a path of criminality, helpless to put an end to it, the honesty found within the motherhood theme is haunting.

The show’s third season isn’t horrendous. Not by a long shot. It’s enjoyable, funnier than the previous two combined, yet it’s not the same show it promised viewers it would be when it first aired two years ago.

It’s difficult to flick a magic wand and turn a emotional driven drama into a lighthearted hour long comedy.

Jenji Kohan and her staff of writers may have accomplished what they set out to achieve, but the show no longer provides the same level of mushy warmth the first two seasons served up on a silver platter.

It feels hollow, an echo of its previous self.

And that’s what’s most disappointing. 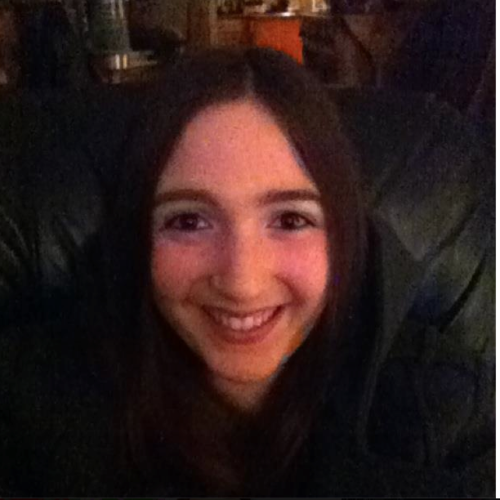