‘Playing House’ review: The Ladies of Pinebrook are back

“You asked us to renew Playing House for a second season!” declared the commercials on USA. “We listened to you!”

“Well…yeah,” I thought. “The show is hilarious. What was this ‘movement’ made of? Six people who thought we’d never see it again?”

Playing House is back on USA thanks to nearly every fan who watched this thing. In a world with 30 iterations of talent shows, yokels hunting Bigfoot on Animal Planet and MTV’s Scream getting renewed just cuz, viewers had to fight to get Playing House renewed.

The first two episodes of the series’ limited eight-episode run aired back to back, starting with “Hello, Old Friend”, which picks up six months after we last saw the ladies of Pinebrook. It’s a fitting title because the main characters feel like old friends. It’s nice to see Emma (Jessica St. Clair) and Maggie (Lennon Parham) back in form. As you’ll recall, Maggie had a baby last season, which might be a bit of a test for the show, seeing as how babies have proven to be entertainment wrecking balls. It’s off to a good start with Emma dealing with a “clinically insane” family photographer who insists on mixing a Fall theme with something tropical. “Let’s go to Rio!” The photographer declares, channeling Ross the Intern. Emma’s got to wear a giant toucan head. These are the things she does for Maggie. It’s either that or she puts on the flesh-color body suit and coconut bra the photographer offers her. The photographer wants to see warmth from them, “Like when they’re alone at night and they’re spooning,” recalling the long-running joke that Emma and Maggie are lesbians.

The crux of the season opener deals with Mark (Keegan-Michael Key) and his exile from Emma and Maggie at the hands of Tina (AKA “Bird Bones”, played by Lindsay Sloane). Mark has settled into his cozy little home life that’s anything but cozy. He and Tina have gone Full Yuppie, wearing matching outfits and are proud owners of a new dog — who’s also wearing the same outfit. Everyone’s uncomfortable seeing one another. Mark smiles his way through it, pushing words through gritted teeth in a veiled cry for help, while Tina is still clearly irritated over Mark and Emma’s failed proposal from last season. Maggie’s totes kewl (as it were) with Tina but Emma hates her guts. The feeling from Tina is mutual but the confrontation, as cringe-inducing as it may be, is hilarious as Emma mocks the dog’s name (Rene) for being “female”, something Tina eschewed in the first season. 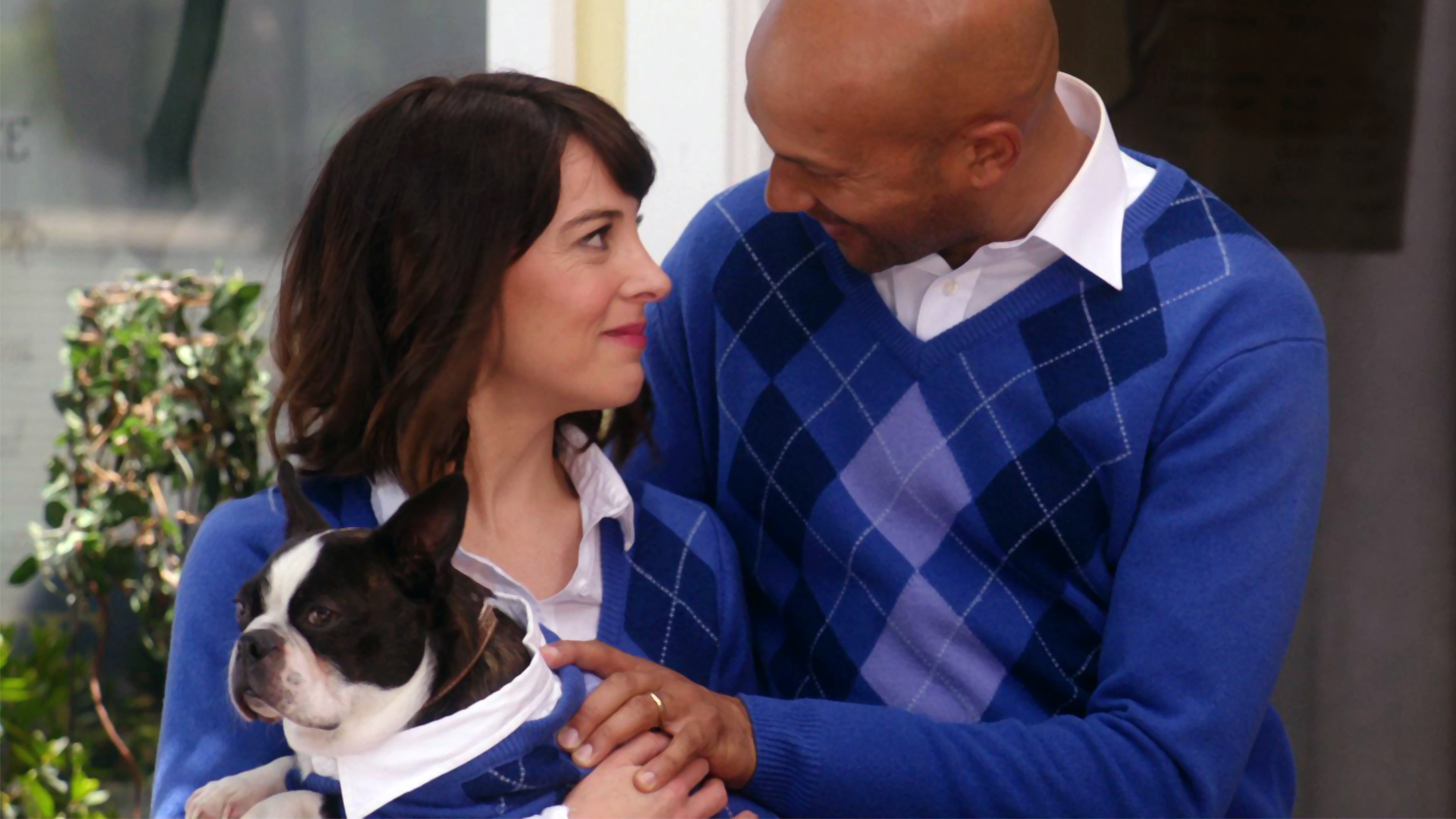 Emma whacks the ball back into Tina’s court: “Uh, was he BORN in France?” When Tina says the dog was born in New Jersey. Emma goes for the kill, declaring its native heritage to be phony and demanding papers. Mark and Maggie have to pull their partners away from one another as they each take parting shots at one another over the French heritage of the breed. Emma wants to see some papers, dammit. Tina says she’ll “mail them to Emma”. Emma says she’ll be “checking her mailbox”.

The situation is a touch more complicated than this, of course. Mark is actually seeing Maggie behind Tina’s back…well, he’s seeing Maggie’s baby, not Maggie. But you get the picture. How does he manage this? He has a trace on his wife’s phone and can see where she is at all times. So far, the scheme works and Mark finds his fingers pinching baby cheeks on a regular basis — except Maggie accidentally leaves Baby Charlotte’s favorite toy behind and the not-so-French “Rene” uses it as a chew toy. Because the two can’t exactly march over and blow Mark’s good thing with Charlotte, Maggie waits until the two of them are on their weekly “date” so that they can ride over and break into their house. Emma thinks Maggie’s nuts — but Maggie’s not giving up. “This is the house of your mortal enemy,” she tells Emma, seducing her inner bitch. “and she got a new farmhouse sink with a hands-free faucet.” Thus begins the mission to retrieve “Mr. Kooky”, Charlotte’s puppet toy in an episode that, for the most part, delivers what fans wanted when they screamed for the show’s return.

Sure, not all of it works: the climax and resolution of the home invasion feels semi-contrived, if not a tiny bit fitting, and the sub-plot with Maggie’s ex-husband Bruce (Brad Morris) living with his mother (Sandy Martin), making giant pots of tomato sauce feels like something that pads out the show rather than contributing to it. Added to this, I can’t be sure where the writers are going with Emma and Mark. Tina is shown to be somewhat sympathetic while Emma is shown to be slightly more selfish. The “group hug” near the end doesn’t do the relationship any favors, either.

Even still, the show has returned and the episode still has the ability to induce some good belly laughs. How can one not, at the very least, smile when Emma discovers Mark’s penchant for binge-watching Murder, She Wrote, and calling it a “cry for help”? This is a real comedy show with really real characters one can relate with. I look forward to more from St. Clair and Parham. They make such a good team and their chemistry is our benefit.