It is All-Star week on this week’s episode of Pitch, “The Break”, and Ginnsanity is still in full swing. The country has taken to all forms of social media to make sure Ginny gets on the All-Star team by using the catchy hashtag #PutHerInTheGame. The movement seems to do the trick because 36 million people have signed a petition to get Ginny in the game and that petition has been brought to the commissioner of baseball. 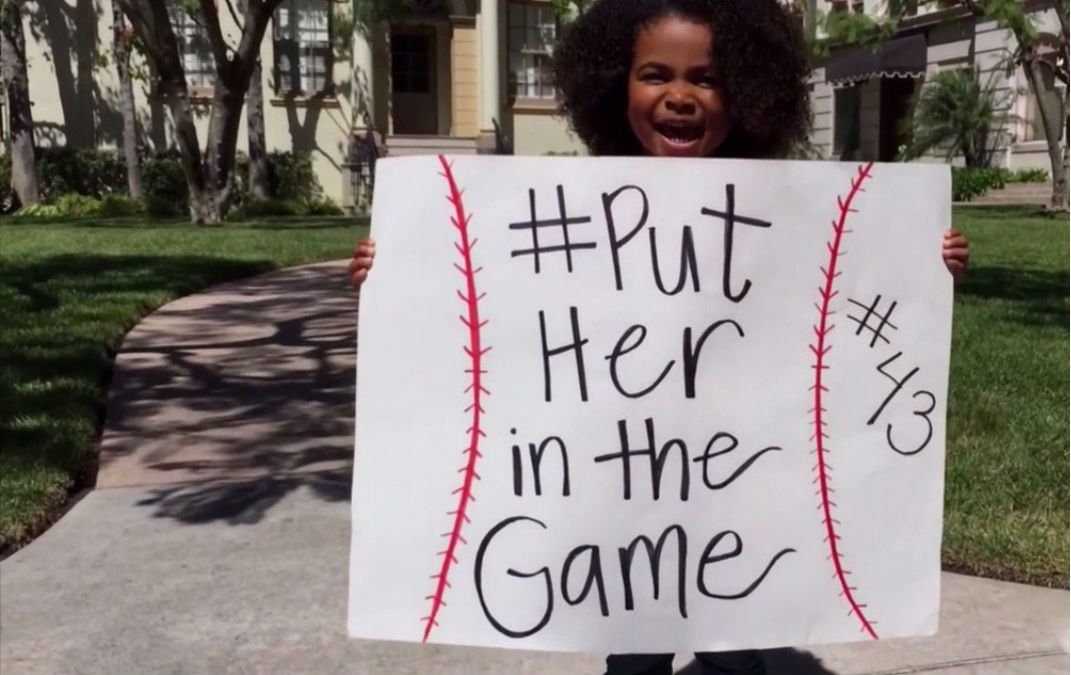 Ginny currently has no chance of making the team because Lawson is the Padre’s representative (I believe that is why). Due to his age, bad back and banging Amelia, Mike Lawson’s body is failing him to the point where he can barely put on a pair of pants.

Amelia suggests that Mike skip the All-Star game to give his body some rest and she will try to get him a spot as an analyst on the post game show. Mike Lawson agrees because being a sports broadcaster falls into what he calls the “Complete Mike Lawson Experience” which consists of three phases:

Phase 1: Hall of Fame player
Phase 2: Hall of Fame broadcaster
Phase 3: I move to the south of France and become the greatest horseshoe player of all time.

Lawson calls Blip to let him know there is an opening on the All-Star team, and the front office should be calling him soon to let him know the spot is his (again, I think this is how it works, I am still not sure). Blip excitedly tells Evelyn, Ginny, and his kids the great news and they all start celebrating as they wait for the phone call from the front office. To everyone’s surprise, it is Ginny’s phone, not Blip’s, that rings next. The commissioner of baseball has listened to the people and decided to #PutGinnyInTheAllStarGame. Blip is visibly upset and torn. He is devastated that his dreams were crushed, but also knows that Ginny isn’t to blame. On the plus side, being passed over as an All-Star means that he can go on the long overdue vacation to Disney World with Evelyn and the kids.

Ginny doesn’t know how to react to being picked for the All-Star team. Yes, this has been her life-long dream but does she really deserve it? I mean, in truth she has only pitched in a handful of major league games. She wants to turn down the spot not only because she feels it is undeserved, but it is also bringing unwanted attention back onto her. She goes to Al for sage advice on how to handle these muddy waters, and sage advice she gets.

Al delivers a moving speech about how when he first asked his wife out on a date she rejected him. Then she saw that he was injured during combat and took him up on his offer out of pity. Fast forward many years they are happily married with many grand kids. Moral of the story: Ginny should take accept the All-Star Game pity date. 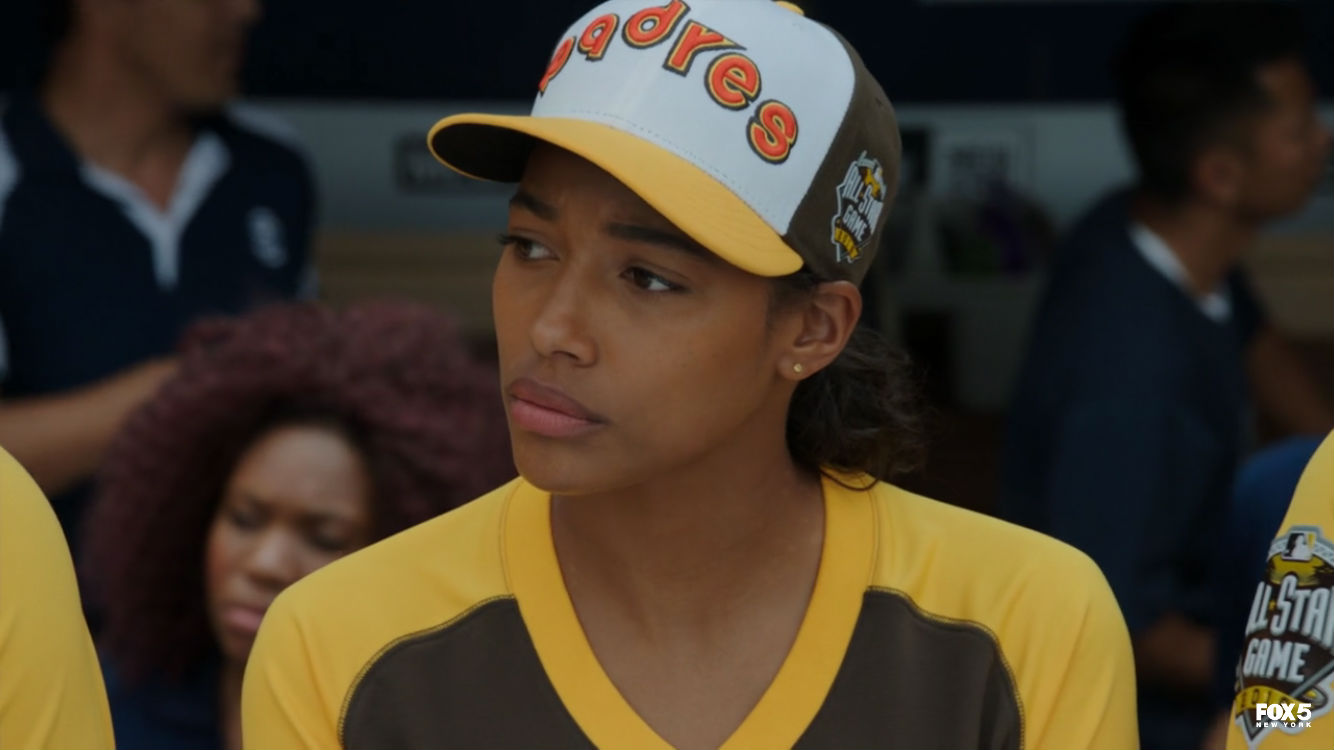 On top of all the All-Star drama, Ginny also has to deal with momma drama. Ginny’s mom Janet is in town for the weekend to visit her daughter. To call their relationship complicated would be an understatement. Ginny is convinced that her mother never has never fully supported her and is condescending and judgey. While at first she was dreading the thought of spending an entire weekend with her mom, now she is dreading having telling her mom she made the all-star team even more as she fears her mom will interpret it as a way for Ginny to get out of spending time together.

Ginny is convinced that her mother never has never fully supported her and is condescending and judgy. While at first, she was dreading the thought of spending an entire weekend with her mom, Ginny ends up dreading having to tell her mom she made the All-Star team. Even more, Ginny fears her mom will interpret it as a way for Ginny to get out of spending time together.

Since Ginny can’t spend the day with her mom, she offers Eliot up to show Janet around town and the pair plan a dinner for the following night. Each of the Baker women bring a buffer to the dinner with Ginny inviting Lawson and Amelia and Janet bringing along her new beau.

The dinner goes as poorly as it possibly could. After Kevin praises Ginny’s dad for raising such a good ballplayer, Ginny loses it, yells “Don’t talk about my dead father” and storms out of the restaurant.

The next day at the All-Star game, she looks up into the stands and sees the seats where her mother should have been sitting empty. And, in a similar fashion to the pilot episode, Ginny gets shaken when looking into the stands and gives up a home run on her first pitch.

The sad thing is that Ginny and her mother used to have a great relationship. Janet provided Ginny with the warmth and comfort that her father did not. She provided relief from the constant training and allowed Ginny to act like a girl her age. The night before Ginny’s first school dance, her father found Ginny and her mom admiring the dress she was planning to wear and gave Ginny an ultimatum: do normal things kids your age do or be a ballplayer. It is a choice no parent should force on a 12-year-old girl and is another example of the pressure and mental abuse Bill Baker forced on his daughter. Obviously Ginny chose to be a ballplayer, but that decision did not drive her mother away. Instead, Janet pulled her daughter aside and told her if it ever became too much, if she ever changes her mind, that she is here for Ginny. And one day at school, while seeing all of her classmate excitedly preparing for the Spring Fling, it did become too much and Ginny rushed home to tell her mom.

When she got home though she found her mother in the kitchen cuddling up to Kevin. And after that, Ginny emotionally pulled away from her mother and the pair’s relationship was never the same again.

After the game Ginny goes to confront her mother and, luckily, this time her post-game parental meet-up is not with a ghost. Ginny accuses her mother for blaming baseball for her father’s death but Janet quickly debunks that notion.

Janet: Baseball didn’t kill your father. A drunk driver killed your father. Baseball killed my marriage and took my daughter away from me.

When she asks Ginny why did they suddenly go from being so close to her ignoring her, Ginny just responds with “Because I was young and didn’t realize how hard it was for you.” I was very disappointed with Ginny in this episode. Her mother has done everything she could for her and has just learned the pain that her mother had to endure over the last 20 years and that is the best apology you can give her? Janet deserved so much more.

Blip and Evelyn
These two are so amazing and cute and adorable they need their own section. As mentioned earlier, after finding out Blip was passed over for the All-Star spot, the Sanders family heads down to Disney World for a family getaway. When they get to Orlando though, Blip gets a call saying that another player was injured, so he has been selected as an All-Star. Awesome right! Well kind of. Blip is ecstatic because this is the most important and special moment of his life and pissed that Evelyn is not showing the same enthusiasm. He even has the audacity of calling Evelyn unsupportive for not being over the moon about ruining their kids’ vacation yet again. Evelyn has neither the time nor the patience to listen to Blip’s whining:

Evelyn: “There’s almost a year of your marriage MIA for all of the road trips and I’ve never complained. Not once. I recap every game, every moment of your life every night and it’s the highlight of my day. I raise your sons when you’re gone. I keep your home while you’re away and I’m ready to uproot our lives if another old man decides on a whim he wants you more than the one who currently pays you. So perhaps you will allow me one single moment of disappointment upon learning our family vacation was just ruined with a phone call.”

Thankfully these words resonate with Blip and he realizes he done wrong. And so, even though he goes to San Diego to play in the All-Star game, as soon as the game ends he hops on a flight back to Orlando. And when he gets into bed next to his amazing wife, he admits that making the All-Star team was not the best moment of his life. The best moment of his life was in college when he built up the courage to buy a hotdog from the concession stands after one of his games to talk to the most beautiful woman he had ever seen.

Guys, these two, I can’t even handle how much I love them. I need Fox to make a faux reality spin-off that looks into the day-to-day life of The Sanders Family.