Peter David and “The Fans Are Buried Tales” Kickstarter

The acclaimed writer, author, and comics legend launches an anthology… from his hospital bed. ​​

Known for his runs on The Incredible Hulk, Aquaman, Supergirl, and so many others – including the creation of Spider-Man 2099 and the Nickelodeon TV show: “Space Cases” – writer, author, Eisner and GLAAD winner, Peter David has had the kind of writing career that most writers would aspire to achieve.

So why is it, that despite being sick and needing to recover his kidney health (he is recovering fine from last that was told to the public), why in his right mind, would he help release a book anthology? A 410 pages long tome of a series that comes with numerous stories – including one that he has written –  on both paperback and digital and in some cases, autographed copies?

Well, it has to do with Farpoint. The following is David’s response, taken from ‘The Fans Are Buried Tales’ Kickstarter description:

“The Fans Are Buried Tales” 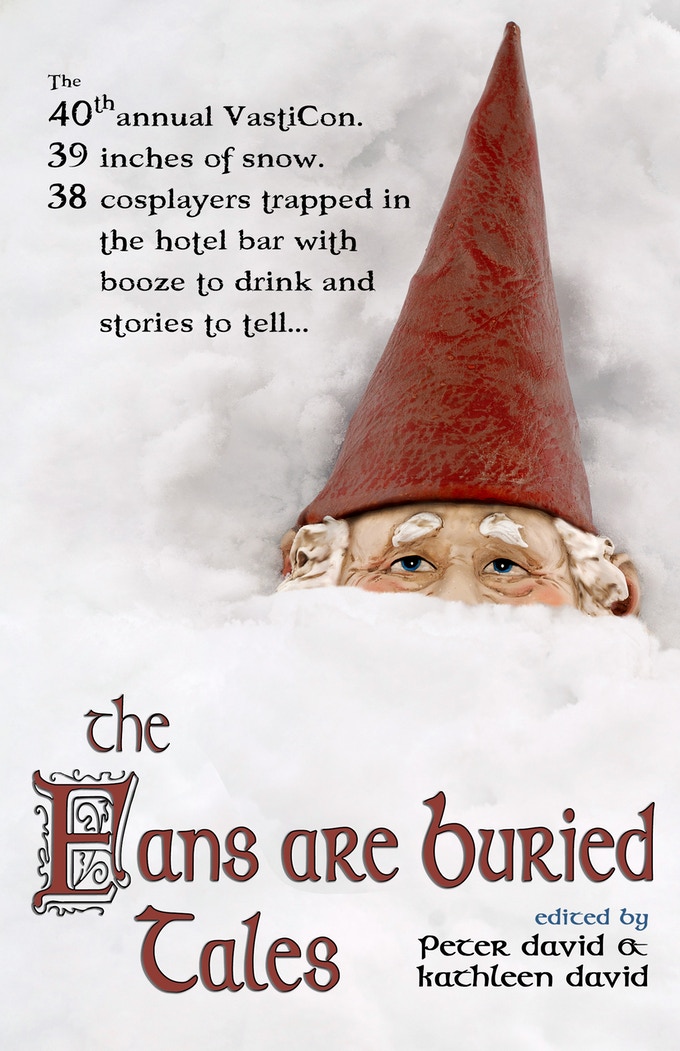 “Most people, when they embark on putting together an anthology, launch a Kickstarter program ahead of time.

I don’t like doing that. I have a problem with asking for people to donate to something that they don’t know what they’re going to get. And since I was doing a pretty broad, sweeping solicit, open to the types of folks who typically don’t get approached for such undertakings, I had no idea what I was going to get.

Who knew that there was so much talent out there? Most of the Crazy 8 Press authors contributed, sure, but we received a murderers row of contributions from fans and pros alike.

What was the premise of the anthology?

Nineteen years ago the attendees of a Star Trek convention called Farpoint got snowed in by a massive unexpected storm. For several days after the expected end of the con, Erin Gray led yoga classes in the lobby, Armin Shimerman conducted acting seminars, and everyone found ways to kill time.

Meanwhile, centuries ago, Geoffrey Chaucer wrote The Canterbury Tales in which a group of pilgrims exchanged stories of their lives on their way to visit the shrine of Sir Thomas Becket at Canterbury Cathedral.

I decided to combine the two, and created the concept of a large, general SF convention in which the attendees are snowed in and wind up exchanging stories of their characters/genres in the hotel bar.

I was flooded with submissions, more than I had money to pay. But I figured, no problem— the copies that I would sell or take orders for at the Farpoint Convention would enable me to pay off everyone.

But now, Crazy 8 Press has just learned that this year Farpoint will not be requiring attendees to present proof of either vaccination or negative test results, which to our mind makes attending the convention too hazardous. Despite the title, we don’t want fans buried permanently.

So… we’re doing a fairly straightforward Kickstarter here, selling copies here that would normally be selling at the show. All the money raised will go to pay the authors.”

Who Is Featured In The Fans Are Buried Tales?

There are also numerous covers designed by Glenn Hauman. Those supporting the Kickstarter will also be able to buy some leftover comics from Peter’s stash – with a certificate of authenticity that they were his. For more details, and if you’d like to help contribute, check out the Kickstarter page. For more details about Peter’s health/kidney failure, check out Peter David’s Facebook page.

@theworkprint
Follow
Previous article
Serendipity At The End of The World: A Kindle Vella Series
Next article
The Failure of Disney+: What Losing Marvel on Netflix Means