Imagine, if you will, that you’re living in Viking times. Only…being a rampaging, pillaging, and conqueror isn’t exactly your idea of a good time. Unfortunately, you belong to a very proud family of warriors and they are gung-ho for a fight. You reluctantly join in the mayhem only to accidentally perish – at least you’re free, right? Wrong. Your borderline coward’s death somehow still counts as heroic enough to land you in Valhalla. Sure, it’s a great place for dead warriors, but you? You’d rather be in Helheim (Viking Hell). Lucky for you there’s a less than capable god and a botched resurrection spell in your future!

This is Helheim Hassle where you play as Bjørn, a pacifist Viking just trying to make his way to Hell. Pesto, a god in need of help, resurrects you, and you have the bright idea of using this turn of events to your advantage. See, Pesto is trying to get to Helheim, and your help is required – she isn’t corporeal, opening doors and whatnot isn’t an option – but you are, and you can. However, Bjørn is no dope. If he agrees to help her, then Pesto has to agree to talk to Hel about him staying in Viking hell. She agrees and our adventure begins.

Helheim Hassle is by Perfectly Paranormal, the same creators who brought you, Manual Samuel. I have never heard of it or played it, but some quick research shows exactly how one game influenced the other. In Samuel, the player learns to control each part of Sam’s body, in this game, Bjørn’s body can detach, and these jettisoned body parts are used in creative ways to solve the many puzzles it takes to make your way to Helheim. It’s an original concept, to say the least, and interesting evolution of the creators’ initial outing.

The gameplay is not hard, which is important. Learning to pick up and use your body parts isn’t challenging at all, and that’s probably because this game doesn’t concern itself with simple controls. No, this game is all about using your head (come on, I had to!). Solving puzzles is the key – how you use your body parts, what kind of combinations you can make, are how you’ll get to Hell. And figuring that out is a lot of fun.

The game starts you off with simple problems, like most games, the first couple is designed to get your comfortable with the mechanics. Press one button to break a body part away, press another to switch between body parts, press another to pick up a part or combine various parts, and you build on these basic beginnings to form a complex toolbox for getting you through any future puzzles. But that’s not all this game has going for it.

The writing and art are sublime. The cartoon style fits the spirit of the gameplay perfectly, while the dialog is both smart and funny. For such heavy subjects as death, existentialism, and spirituality you never feel any weight. The text is witty, self-referential, and down-right honest at times, with characters speaking plainly instead of affecting a faux old-English style. It’s refreshing, and it works excellently for the material. 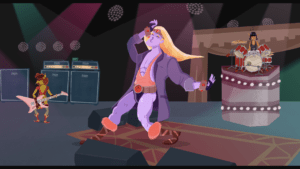 The following is an interview my colleague did with the creator of Helheim Hassle:

[This is Robert J. Kijowski] for the Workprint and I am speaking with Ozan Dros, the creator of Helheim Hassle from Perfect Paranormal. Do you want to describe the game for me?

Ozan Dros: It’s an adventure game and as much dealing with friends as it deals with limbs.

RJ: It’s a puzzle game, but what goes on in it?

OD: So you play as Bjørn, an unusual Viking. All of his tribe is all about dying in battle in order to get to Valhalla, which is the reward for being a warrior. Bjørn, now is the outlier that doesn’t enjoy combat and wants to die of old age so he can go to Helheim, which is basically the chill-out lounge in the afterlife. The other Vikings think that’s super boring, so they want to do the opposite. In the beginning, he’s trying to get out of a major battle, but in doing so he dies in what constitutes as dying in battle.

RJ: He dies in a glorious fashion, people!

OD: Yes! He gets taken to Valhalla against his will and we begin the game there. A thousand years later, he is met with REDACTED to pick up something for REDACTED. The game ties into Manual Samuel and it happens upon the same day.

RJ: Kind of reminds me of James Joyce!

OD: Yes! We put in creatures like Satan and the Four Horsemen of the apocalypse in the previous game and we’re expanding into Norse mythology and one day I hope we can touch onto every story.

RJ: That would be fucking great. Now, I have to say, the humor in this game is ON POINT! It’s very self-referential, it’s super self-aware. With the character design and the color choices, it all fits in to be wacky and kooky. Was there any influence behind the design of it all?

OD: We have one guy that does character designs. We have a lot of characters as well. You can interact with over 80 characters, and that’s just the storyline. Every time a new character pops up, he designs like ten designs for them. The previous game was influenced by old Hanna-Barbara cartoons. This new style is influenced by early 2000s cartoons, like Samurai Jack-

RJ: I was JUST about to say, this art style is very Tartakovsky!

OD: That is really good because we look up to that show so much. It is so good.

RJ: Talk about the gameplay mechanics.

OD: You are dead, a cadaver. You can take up your limbs, throw them around, combine them in unique ways to solve unique puzzles along your journey. It’s basically a team effort. When we did Manual Samuel, you had to do everything manually. Someone said, though not accurate the limbs had a life of their own. We took that to HEART and ran with it. Why not have an arm and a leg go each on an adventure separately? 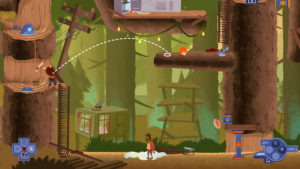 RJ: To me, that’s nearly RPG, where you have different characters, and the limbs are their own character, doing something for a unifying goal!

OD: Yes! Whenever I see an RPG, like the guy with the mallet, he can do one specific goal to help the greater good, or you switch to a character that can fly. Much of that is the same here. Just imagine, like Power Rangers, they can combine their forces.

RJ: With our powers combined!

OD: With our powers combined… you can turn into a normal-looking body.

RJ: The story itself is totally relatable. You have someone that just wants to fucking go to war. He just wants to chill the fuck out and live his life. Bjørn is like a lot of us. We just want to chill and don’t want to be conscripted into battle. Everybody around him is so gung-ho about dying a warrior’s death and Bjørn teaches us, yeah, that’s boring. Was that the pervading theme?

OD: Throughout the game, you may end up in situations where your best bud, Pesto, who is from regular Hell working her way up to Viking Hel, cannot sometimes read the room and gets Bjørn into some serious shit. They play off one another and pays in comedic dividends. She is straight forward, Bjørn is more diplomatic. There’s little combat in the game. It’s mainly puzzle-solving.

RJ: I love that! I love a game where the only thing weaponized is your brain. Are there any future plans for the title?

OD: Right now, as a milestone, we’re looking to release the trailer. Be on the lookout for that! This will be open to everything. Switch, X Box and PC to begin with, with Playstation down the line. ]

I highly recommend this game. It is fun, challenging, and a joy to look at and listen to. As Pesto says “Hells are always better.” 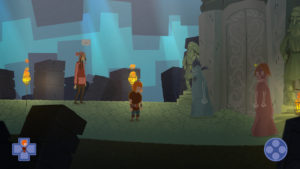 P.S. Shout out to Ozan Dros and Perfectly Paranormal for taking out the time for such insight and a really fun romp through a very innovative and funny game!