Do you know why the dodo went extinct? Spoiler, it wasn’t their fault. Dodos were the victim of colonization, and, ok, sure, their own inability to adapt to change. They were weird flightless birds that became easy pickings for the new people and animals that invaded their lands. On the bright side, none of this dark history is necessary knowledge to play the game Dodo Peak.

That’s right, this addicting mobile game come console entry has a much lighter mission. Sort of…I mean, you’re a mamma or papa dodo that’s lost their eggs, which means you have to go out into the world and rescue you’re ready to hatch babies. In the meantime, snakes, rocks, and all other manners of obstacles will be standing in your way. Oh, and there’s one more hitch you should be aware of. This game is an homage to Q*bert!

Not only are your movements are limited, but as a bonus complication, the movements of your babies are limited. As you jump down onto a platform, your babies will trail behind you leaving them exposed to danger unless you keep moving (or stop, depending on their position and the danger). The more babies you have to rescue, the more complex your return back to the nest becomes. It’s a satisfyingly frustrating mechanic that adds a new layer of challenge to the old Q*bert groundwork.

Along the way, you will unlock new dodo skins and levels. New dodos come with new advantages and weaknesses, while new levels come with better rewards but harder routes to success and more wily enemies. Not too shabby for teaching an old dog (err…dodo) a new trick!

My time with the game was short (if any of you have been to PAX then you know it’s nothing but long lines, waiting, and longer lines), but in my brief experience, I enjoyed my visit to dodo island. The visuals are especially enchanting. Your dodo parent is all soft edges, while your chicks are adorable tiny copies, and when you get new dodo skins, the kids dress up too! The layout of the levels is geometric without being as blatant as its inspiration – you walk on squares, stacked and aligned so as to create the illusion of walls and walkways. Bridges, mountains, bodies of water, and of course plant life to round-out these beautifully crafted islands of terror. The dodo skins themselves not only come with added features such as speed or strength, but they are also fun to collect and see. Some are historical (Hi, pharaoh skin!), some are movie callbacks (Hi, Indy!), and some are fairly random (Ski suites, Gold dodos, and Penguin dodos to name a few). Honestly, if I were to play long enough to get really good at the game, collecting the different dodo disguises would probably be my favorite part. 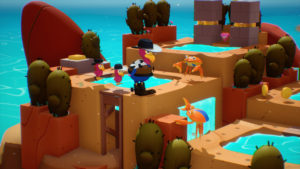 The following is an interview that my colleague did with the creator of Dodo Peak:

[ Robert Kijowski: I am here with Patrick, one of the developers of Dodo Peak. This I would describe as very Q*Bert meets the Last of Us. What would you say is your inspiration?

Patrick McAvena: We were definitely inspired by the classic 80s games of yore. Growing up in the 80s and we felt that we wanted to do that art style and mechanic and put that clean, easy to learn gameplay in place.

RJ: How crucial was it as a game designer to keep the place between open to anyone that can play but not too easy for the seasoned gamer?

RJ: I noticed the color palette in the game. It’s very 80’s-esque. It’s very vibrant. It’s very soothing. How much thought went into the specific colors themselves?

PM: My background was as a VFX artist and commercial industry for a while and one of the other co-creators, James, was a motion designer so with our powers combined did a lot of R & D and found this amazing art director named Maxime Bourgeois and we just went to town on those.

RJ: I wanna say, though it may be a lead-in question, what is your favorite aspect of the game? Is it the speed round? Is it being able to control the difficulty of one level? Or is it an amalgamation betwixt the two? 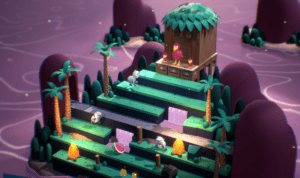 PM: I think it’s the whole picture for me. To get the right feel and the right pacing is super important and we ended up having a lot more mechanics and then pair it down the bare essentials.

RJ: In terms of traps, let’s be honest, was that not fun to create to thwart whom you are piloting?

PM: I actually really, really loved that aspect and it was a lot of fun, and we tried. There was a lot of things that didn’t end up in the game because it didn’t read right. What we found was a lot of static obstacles, but people enjoy more those that they can interact with. The latter ended up being our rule of thumb.

RJ: Is there anything new on the horizon for the Dodo Universe?

PM: We’re coming to Switch this Summer. We also have a really awesome content update next month. Sky world. A whole new way to use the mechanics. Outside of that… we have plans that you’ll have to stay tuned for… ]

I recommend, if you have the time and platform (an iPhone, or a Nintendo Switch in this case) to check this game out.

P.S. Shout outs to Patrick McAvena and Moving Pieces for granting us the pleasure of playing this amazingly chill, sometimes frenetic but always fun and beautiful game. 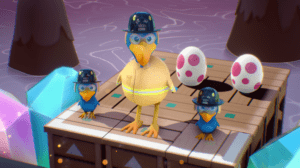