I should preface all of this with: I’m not a hardcore Warcraft nerd. If you’re looking for someone who has several max-level characters on WoW and a deep knowledge of obscure lore, I ain’t it. What I am is a fantasy nerd, a gamer who has spent more time than I care to admit in MMO worlds (including WoW back in the day), and someone with a deep abiding love for an adventure tale. And I’m here to tell you that despite the 27% rating on Rotten Tomatoes, Warcraft is a good fantasy movie.

Believe me, I’m as surprised as anyone else. When the film was first announced, I set my expectations around Eragon-levels of low. Based on a video game and high-fantasy? No way in hell it would do well. It would be a pulpy cult-favorite at best and universally panned at worst. But as the release date grew near, that little nerd inside me that craves excitement and adventure began to awaken. I sat in the theater with my 120 ounce soda and vat of popcorn butter while the opening credits rolled and all those fears of Warcraft failing washed away.

If you’re worried that Warcraft is a niche film, made only for die-hard fans of the series, cast those fears aside. You don’t need to have an in-depth knowledge of the lore to enjoy the film. Sure, there are spoiler-free guides out there (like this one) that can give a viewer a better understanding of the world and characters, but for the most part, those intricate details aren’t what’s important. It’s the world that stands out so well in Warcraft; it’s mysticism and beauty captures the eye, pulls in the viewer, and keeps them there.

You’ve seen the promos: “Two worlds. One home.” And that’s the overriding theme of the film. Warcraft follows two races, orcs and humans, as they seek to respectively find and protect their homeland. There are many, many other races in this world including dwarves, elves, and draenei, but the human and orc war is the focus, which is for the best. It makes for a less chaotic entry into a world with so much culture and history. With the aid of the warlock Gul’dan (Daniel Wu), the orcs have left their wasteland home planet of Draenor for Azeroth, the world of the humans. Only the strongest warriors are able to journey through the first portal to the foreign world so that once there they might acquire the magic necessary to open a second portal to bring the rest of their families through. But to do so, they have to ravage the human lands to get what they need and that forces the humans to gather their men and fight back.

The important thing to note about Warcraft is that it’s not all good guys against bad guys. Our introduction to this world is through the eyes of an orc, Durotan (Toby Kebbell) and his relationship with his pregnant mate, Draka (Anna Galvin). Right off the bat we’re treated to the stunning CGI seen throughout the film, so crisp and clean that I wish I hadn’t watched the trailers beforehand. It’s through this CGI that we witness the surprising sweetness in an orc relationship, so often depicted as wordless grunts and brute force in other media, but in Warcraft, Durotan is a father who cares for his unborn, a mate who wants only to protect the one he loves. He’s gentle as he caresses her pregnant belly and the pair banters about baby names. 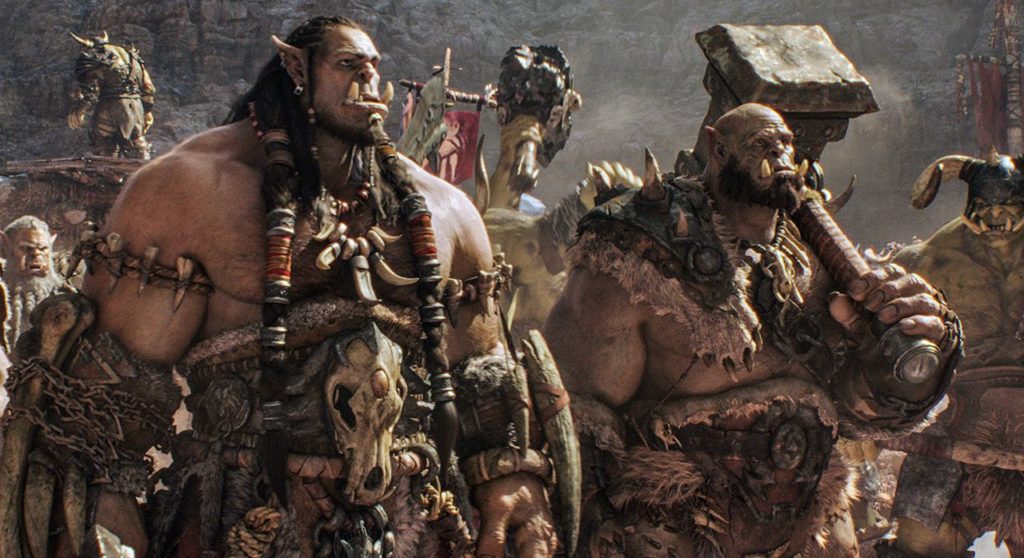 The human side is led by King Llane (Dominic Cooper), knight champion Anduin Lothar (Travis Fimmel), and Guardian Medivh (Ben Foster). It’s up to these human leaders to stop the orc invasion before the Dark Portal allows the rest of the orcs into their world. Sure, the story moves at a breakneck pace, not stopping to hold the viewers hand and stroll through the dialogue. There are a lot of character names and places to keep track of, but it’s better to take the story in as a whole without trying to memorize the minor details.

Without a place in either realm is the prisoner Garona (Paula Patton), the half-orc half-human (maybe half-draenei?) who mostly acts as a translator for each group. It’s through her eyes that we see the possibility for peace between these warring groups. Without a doubt, she became my favorite of the movie, a half-breed who could see the good (and bad) in both sides.

Warcraft isn’t without its flaws, of course. The human side, notably, is filled with rather stereotypical fantasy characters like the clumsy mage apprentice, Khadgar (Ben Schnetzer) and the virtuously bland King Llane. Without the window into the orc world, Warcraft would play out like a paltry Lord of the Rings knockoff. And I admit I was disappointed by the half-hearted attempt at a romance that seemed forced and unnecessary.

And yet, at the end of the day, the battle sequences were well-done, the magic believable with consequences, the creatures (wargs and griffons) looked amazingly real, and the world was fully fleshed out, if given the drive-by treatment at times. The female characters are each strong in their own right, though I don’t know why Hollywood is intent on covering women of color in green or blue makeup. Despite some overlap in races and the Aragorn-esque hair cuts, this isn’t Lord of the Rings. Not every character is safe because they’re good and there are repercussions for every action. Warcraft isn’t quite Game of Thrones shades of grey, but it comes closer than most fantasy.

Warcraft is more than just action marketed as entertainment. It’s a good origin story that sets up the possibility for more stories to come, and I, for one, am thrilled at that prospect.