Since Shayla’s murder, there seems to be an unspoken rule that the writers of Mr. Robot must give us at least one “holy shit” moment a week. Obviously, it wasn’t enough to take her away from us, in the episode that followed, we also witnessed Tyrell murdering Sharon in a very unusual move, considering everything that FSociety has been up to — and will be up to. This week’s reveal changes the game considerably and answers some nagging questions we’ve all had about Mr. Robot himself.

Picture, if you will, a ballet class. Angela and Darlene are students there. Angela’s concerned for Elliot. Darlene attempts to reassure here. “He’s had a shitty month,” she says.”Or last 20 years…take your pick.” Angela replies. Darlene notes that she and Angela always mentally and emotionally pay for Elliot’s personal issues. Angela only has her commute to complain about. Darlene says, “The silver lining is that you get to see moi!” This unusual moment foreshadows everything. We should already know the answer. Darlene’s no longer confrontational. She’s not trying to manipulate Angela…and Angela smiles and giggles with her as they act like long-time girlfriends… 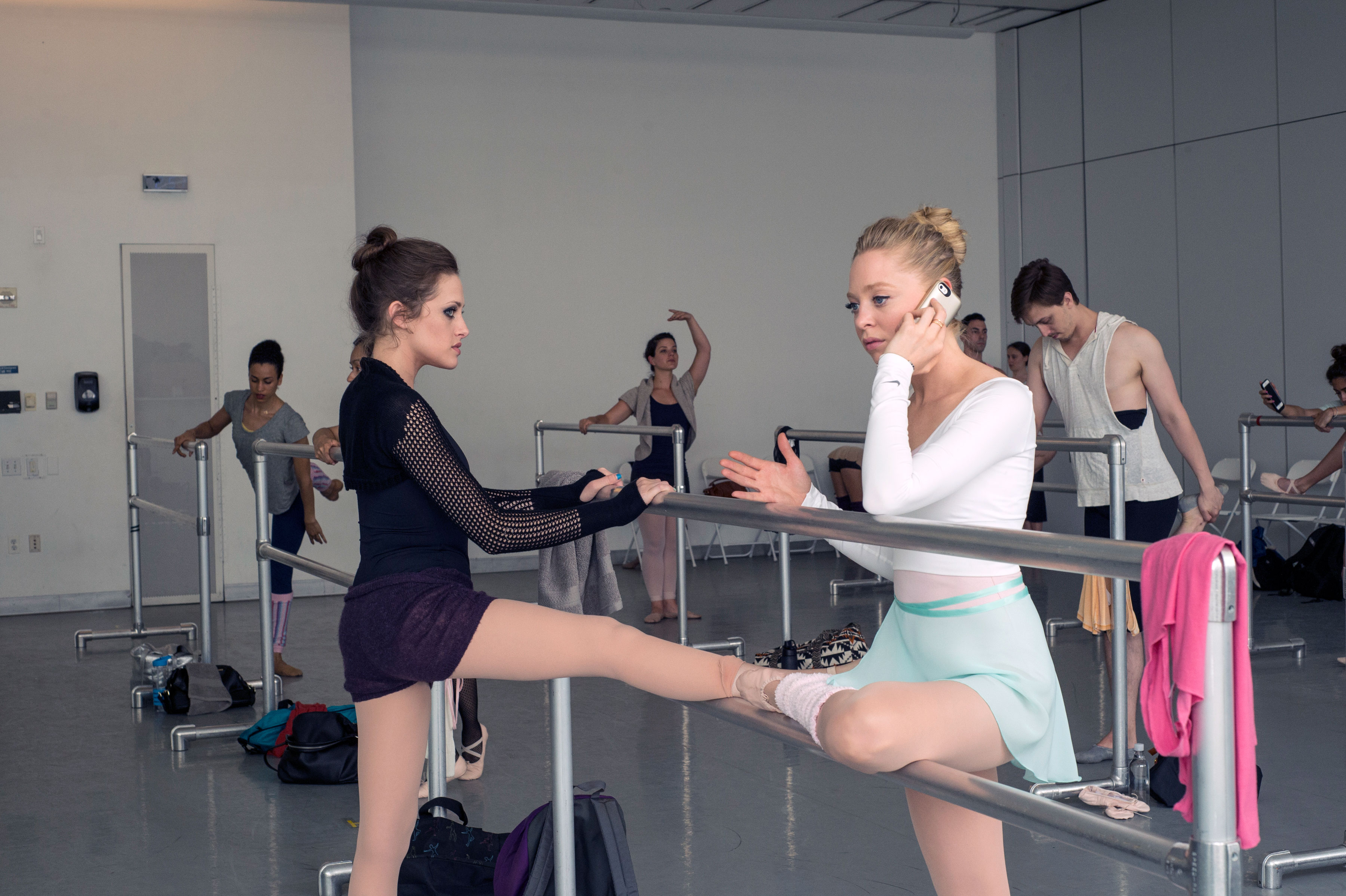 Then comes the next hint: Elliot, staring at a painting of a farm. There’s a figure leaning over a fence, overlooking the valley beyond. He notes that he hurt Krista, his psych, by revealing everything to her. He’s sorry but figures it was necessary. “She’s like everyone else,” he says. “afraid to peek over their walls for fear of what they might see.” Then he goes about cataloging Krista’s life, filing it away in his disk binder (aptly named, “Speaking in Tongues” by The Talking Heads) and goes about his business.

And business is booming: FSociety’s big Evil Corp hack is back on. Robot managed to get the band back together and The Dark Army’s people dropped an incognito message for Darlene on the subway — White Rose is ready to meet. Elliot’s “Raspberry Pi” hack is still active and running. Even though he hasn’t been an active member of FSociety, Elliot’s been doing his part, updating the backdoor program planted in Steel Mountain’s temperature core. Darlene’s fearful. She’s stolen a gun from Cisco, the man she met last week in the park who helped set up a meet with White Rose. She wants Elliot to bring it with him, then hugs him HARD. Mr. Robot’s not having it. He tells Elliot that Darlene’s a distraction. 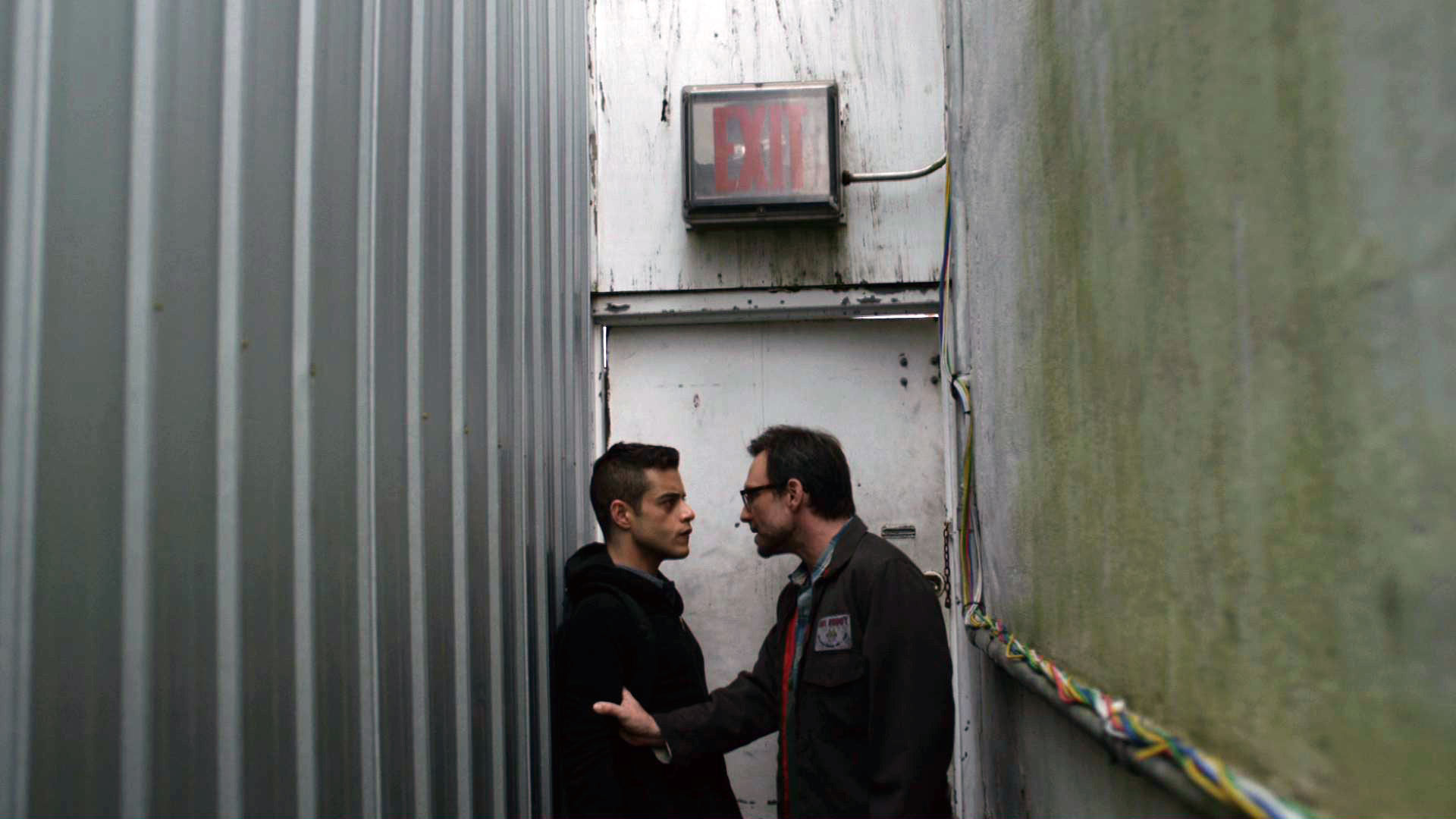 Then why is Robot meeting with the evil Tyrell Wellick? Yes, this happens, too. The pairing is unlikely — and that’s why it shocks us when Wellick proclaims himself to be a “partner” to Robot and his scheme to bring down Evil Corp. He even knows Robot’s “dirty little secret” and threatens to tell “interested parties” all about it, something Robot dismisses as petty. Everything they’re striving for will render that moot, he says. Nothing will matter.

This adds to Wellick’s growing insanity. Did I mention that he’s slowly losing his shit? If the murder of Sharon at his hands wasn’t enough to clue you in, he walks into an Evil Corp office that’s buzzing about it. You hear whispers, you see his eyes — still cold but trembling. He’s fearful, he’s paranoid — and you see him blow up when a colleague spills coffee all over him. What could be worse than that? How about Gideon waiting in his office, revealing that he’s set a trap for FSociety by setting up a decoy server? If they hack this “honeypot”, the jig is up and everyone — including Wellick — will be exposed. Suddenly, the walls are closing in — and if Wellick wasn’t feeling claustrophobic before, the cops are cavorting outside, ready to question him about the murder of Sharon. The camerawork on Wellick this entire episode is fittingly up close and personal. He’s flying apart at the seams. It’s clear that he does things for the sake of doing them. He’s out of control and his only compass is his pregnant wife who is also, ironically, just as insane as he is, only more guided and focused. 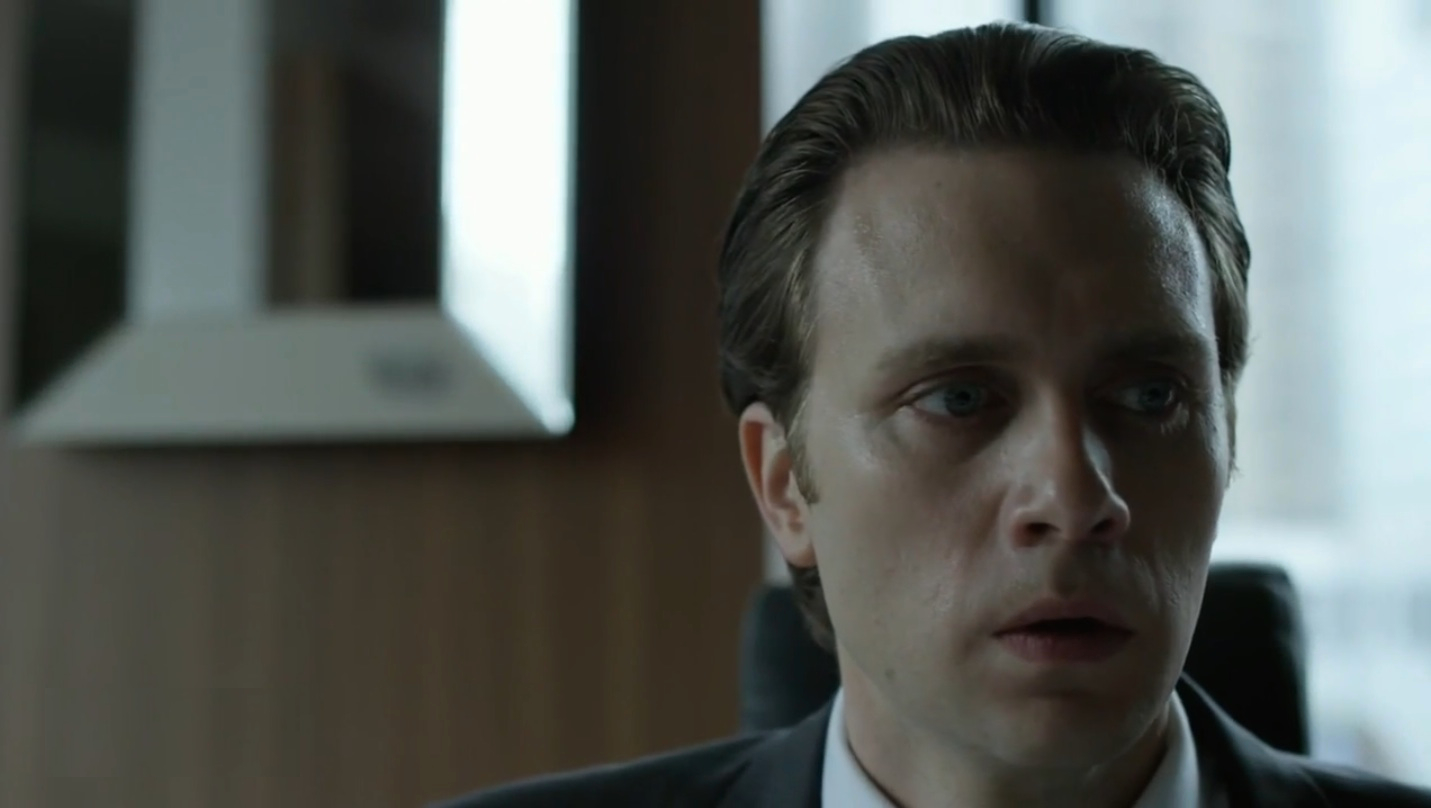 And that’s the thing that interests me about her. Joanna is the real go-getter. Yes, Tyrell is the one going to work, but she picks up the slack when Tyrell always fails — and she doesn’t give a damn, either, which makes her frighteningly dangerous. This woman is nearing giving birth and she practices BDSM, drinks wine at dinner parties, and encourages Tyler to screw any man or woman he sees fit as long as it advances them forward in life. So, to recap, his partnership with FSociety is in jeopardy, the cops are at his front door and they’re ready to grill the Wellicks eight ways from Sunday. His wife sits on the couch, eating pickles out of a jar with a fork and tells Tyrell that his recent behavior isn’t instilling her with confidence. At first, Tyrell pleads with her to join him and FSociety but his wife scoffs. The cops enter the apartment after Joanna invites them in. Suddenly, it all clicks for Joanna: in her head, she deduces that Tyrell has murdered Sharon which means that the trail of guilt will ultimately end up burning a path into their lives. What does she do for an encore?

There’s a scream, the sound of crash. Tyrell runs in to discover that his wife’s water has broken and he immediately tells the cops that his wife’s in labor and that they have to get to a hospital. The timing isn’t coincidental…Tyrell looks over at the kitchen counter…and sees a bloody pickle fork sitting there. Joanna has obviously used it to induce labor. This begs the question, “Just how far will Joanna go to keep her hands near the levers of power?” And is her own husband even safe from her? The plot thickens…

As for Gideon and the “honeypot” trap, Elliot finally meets with the elusive White Rose (B.D. Wong) who turns out to be an androgynous being who is obsessed with time and nothing else. White Rose gives Elliot three minutes to convince them that the Evil Corp hack is still feasible. Turns out The Rose lost a lot of faith and trust in FSociety. The malware disk that Angela used to infect Allsafe? It was a test from The Dark Army to see if anything at all could stop the axe headed for Evil Corp’s neck. Unfortunately for FSociety, the hack exposed Gideon’s plot to catch the hackers. She gives Elliot two days to get rid of the Honeypot, otherwise, The Dark Army moves on — this time, for good. 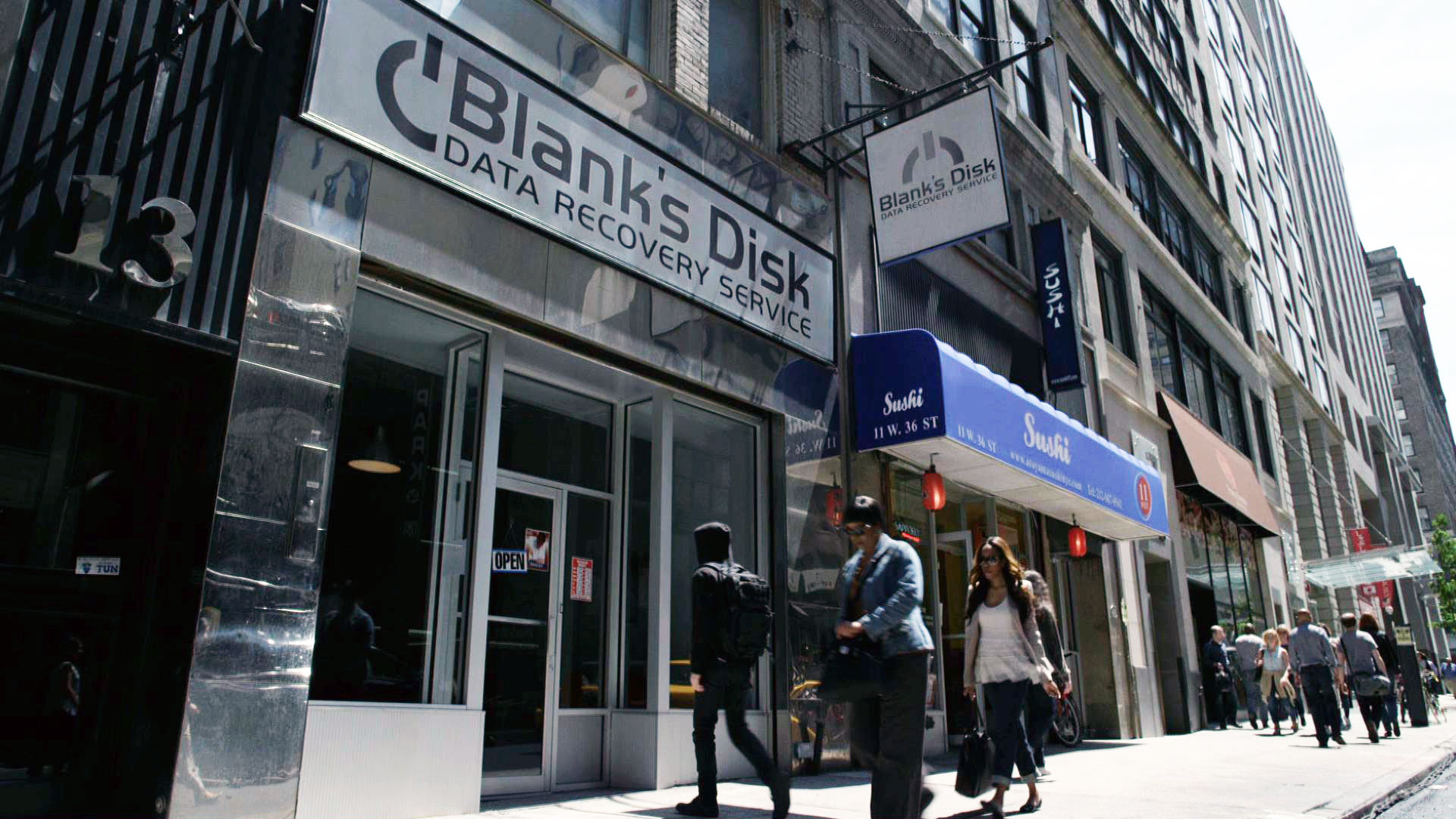 Elliot and Darlene team up for this, with Darlene hacking Allsafe’s meeting room HD screen with a video in order to send everyone into the room to watch it. Elliot uses this time to sneak into Gideon’s office so that he can obtain his e-mail passcode in order to call off the Honeypot. He barely succeeds but he succeeds, nonetheless. The problem? Gideon all but knows Elliots behind the recent trouble with FSociety — so Elliot declares his time with Allsafe over and done with.

This, of course, isn’t going to bode well for his relationship with Angela. It turns out the person who bribed her with the infected disk has released a bunch of private information anyhow — including nude pictures of her. This angers Elliot but Angela doesn’t wallow in sorrow. Instead, she pushes back, telling Elliot that he was never there for her to begin with, so there was nothing he could do about any of it. Elliot tries to play it off, using Shayla’s recent death as an excuse. “It’s so strange,” Angela tells him. “I really miss ‘us’.” When Elliot asks her why that’s strange, she simply says, “Because I never thought I’d have to.” Elliot looks smug and, in voiceover, says that he’s become the “other side of the fence Angela doesn’t want to look over”. The trust is gone. The moment is bittersweet as it will ever be. 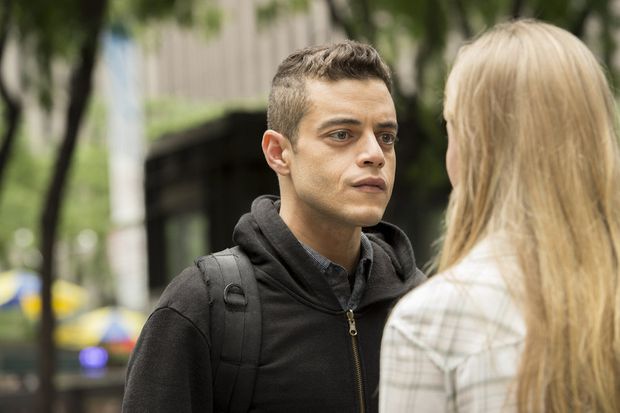 Elliot has more important things to deal with — or so he thinks. After the Honeypot was disabled and The Red Army kept their promise to initiate the final Evil Corp hack, Darlene’s beside herself. She tells Elliot how important he is and that he’s a great man. Elliot, with the loss of Angela’s friendship and Shayla, kisses Darlene…but the aftermath isn’t what Elliot expected — and neither did we, as an audience. Darlene says that Elliot’s forgotten who she is again. Elliot says that he knows she’s Darlene…but then slowly begins to remember the truth:

Darlene is his sister. The moment after in Elliot’s apartment is a thing of beauty. Whereas Wellick has been slowly coming apart, Elliot comes apart faster. He stands in front of a mirror and sees his reflection — as well as the reflections of his friends and FSociety confidants. Then he sees Mr. Robot and gets an idea: he’ll hack himself…but there’s no data on him. He has no identity. Quickly, he goes to his disc binder and finds a blank disc. Loading it and decrypting it, he finds several photos of Mr. Robot…along with pictures of himself growing up with Mr. Robot. That’s when he finds a frame with the family picture — and finds that Mr. Robot is his father. He hears a knock at his door and, coincidentally, Mr. Robot stands there. He smiles and tells Elliot that they need to talk.

This episode was brilliantly conceived on every level. It really says something when a show reveals what nearly everyone’s suspected for so long but still effectively deliver a shock. While I’m positive that Darlene is Elliot’s sister, the whole “Robot is his father” angle doesn’t really compute yet. Of course, we’ll see how this all plays out in the last two episodes of the year, but what a final two episodes it’s going to be. How will Darlene play into things from here on out? Suddenly, the fact that she was wearing a black leotard at ballet while Angela was wearing white means so much more to me. Will the two fight for Elliot’s undivided attention? I believe it’s safe to say that this show continues to be one of the greatest shows on television. Seeing Elliot and Wellick lose it on opposite ends of the spectrum was a thing of beauty and sets up an interesting dynamic since somebody has to be around to pick up the pieces when Evil Corp goes down.

The episode seems to toy with the notion of reality and what we define as absolute truth. That said, it’s very hard to know, with absolute certainty, if Robot’s part of the ultimate problem or if he’s the solution. Is Elliot an heir to the empire?

I really cannot wait to find out.