When we last left Elliot and “fsociety”, they were ready to lower the boom on Evil Corp by corrupting their climate control system, forcing their servers to overheat and crash. This episode sees this attack through — but fsociety finds that even the best laid plans have flaws or, as the episode refers to them, “exploits”.

The episode hits the ground running with Robot sending Elliot into the lobby because why the hell not? Elliot’s there, asking to go on a tour of the facility. They initially deny him even though Elliot tells them to look him up on the Internet. Elliot is supposed to be “Sam Sepiol”, an up and coming tech entrepreneur. After some insistence, “Bill”, a low-level employee looks his name up on Google where he finds a bunch of faked news articles and a full-on Wikipedia page about him. “Mobley has built up a reputation over the years with over 20,000 edits,” Elliot explains. Yesterday, I said Noah’s goofy hacking skills were ridiculous. This may have tied that. 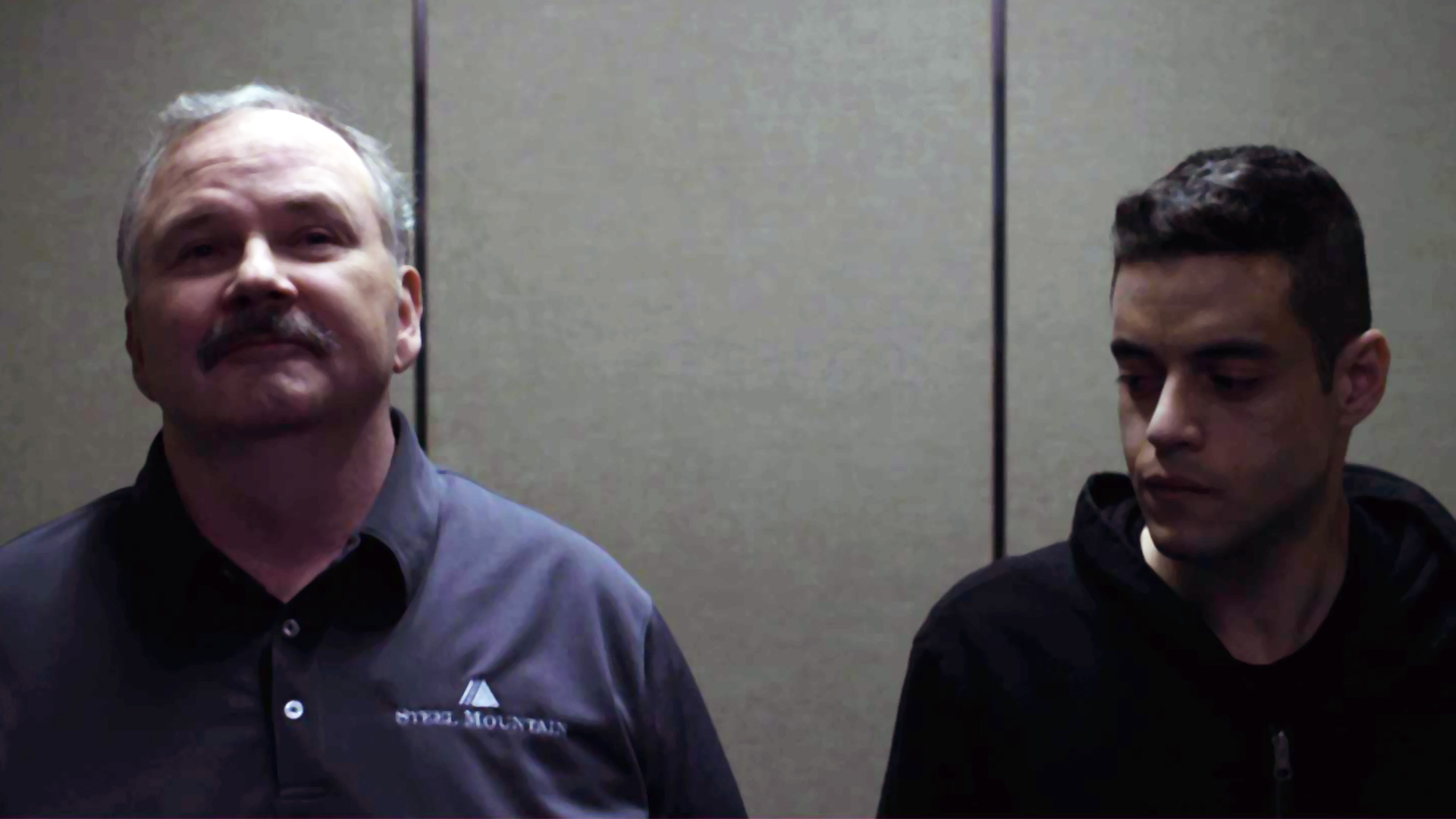 In any case, Bill takes him on the tour — but Elliot needs to get to the server floor. Unfortunately, Bill’s not able to do that. At this point, Robot orders Elliot to completely mentally decimate Bill. Elliot’s unable to do so — at first — but then flashes back to moments in his childhood where his mother would berate him a verbally stomp him into the ground. He channels that and absolutely destroys Bill, telling him that he’s worthless and that, in the event of his death, nobody would attend his funeral. He tells Bill to get a supervisor, which Bill does, voice cracking and teary-eyed. Elliot tries to apologize but Robot screams in his ear not to do it, a moment which you really want to punch Robot for. The problem is that the supervisor is NOT the one fsociety did research on which means they have to scramble to fix the situation.

After dumping the new supervisor, Elliot attempts to navigate himself where he needs to go — only to bump into Tyrell Wellick — and it’s a whole new ballgame. The play between these two characters is always brilliant. Wellick invites him to lunch where he explains that regular people disgust him. This, after telling Elliot that two of the people he deals with fund ISS and the Palestinians against Israel. He mocks their waiter for being somebody who’s content with serving him salad on a daily basis. Elliot sits and listens to Wellick go on and on about what it takes to be a human being in his world, suspecting that Wellick’s eventually going to turn him in for his attacks against Evil Corp — and security guards eventually show up to complete that fantasy — but it isn’t to be. Elliot excuses himself to the restroom where he finds a line to the climate control through the janitorial supply closet. He connects the “Rasperry Pi” hack, only to run into Wellick again. He apologizes and we get an unsettling admission: 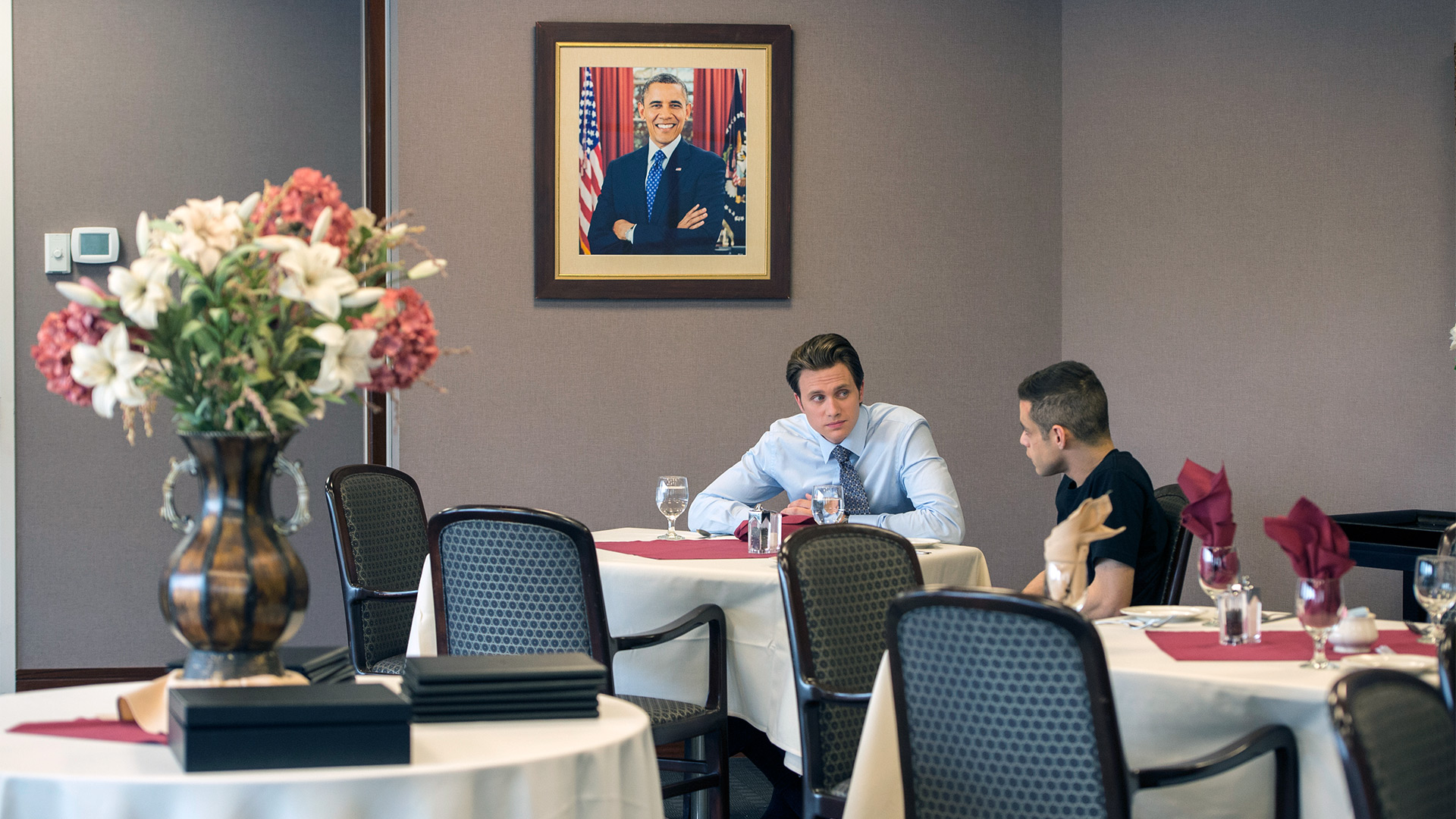 “I know you framed Tyler Colby,” he says. Elliot feigns ignorance — but Wellick doesn’t care about Elliot’s motivations or his ultimate revenge scheme because he believes himself to be above the racket of Elliot and fsociety. This is Tyrell Wellick, a man who lives the meme, “No fucks are given”. He’s a machine. There’s a great scene later on where Wellick and his wife are at a dinner party with Evil Corp’s new CTO and his wife. After the CTO gabs about his wine collection, Wellick turns to the CTO’s wife and asks how she could be with somebody who’s so boring. She excuses herself to the bathroom while Wellick’s wife ends up listening to the CTO’s drivel. Frustrated (and pregnant), she finishes her husband’s wine while Wellick visits the same bathroom the CTO’s wife is in. At first, his wife is offended that Wellick would even have the balls to do such a thing. She asks him what he wants. Wellick says nothing at all. The two just stare at one another. Suddenly, she slowly spreads her legs. He looks at what’s there and smiles. “Thank you for a lovely evening,” he snorts, and walks out. The moment is debatable in terms of meaning. Has Wellick found a weakness in the CTO’s wife? Did she take the power back by offering herself to him in such a lurid manner? What does this mean for the future of the position? We shall see.

In other developments, Angela’s done with Ollie and has moved to her father’s place. Her father lives alone, is “grizzled” (that word never gets old) and still loves saying things like “your boyfriend is a douche”. Turns out he’s a slave to the system, owing thousands in past due bills to Evil Corp in some manner. This makes things a bit interesting in that Angela might end up finding herself in the middle of Elliot’s world soon — if things work that way, that is. It turns out that the Dark Army (fsociety’s partners in this game) have ditched fsociety, sending Darlene into a whirling dervish. She’s ready to go it alone to “damage” Evil Corp. Mr. Robot, however, tells her that “damaging” them isn’t the goal. Completely destroying them is what they’re aiming for. Elliot eventually talks her down in a semi-poignant moment that sees Darlene at her most vulnerable, thus tying into the theme of this week’s show. Where does fsociety go from here?

Good show this week, if not a little marred by the goofy Hollywood hacking moments at the beginning and a plot that seems to have some false starts and stalls. They’re slowly losing the heavy-handed garbage they fell back on in the first few episodes, though the really lame “crossroads” analogy with Angela while she was out for her jog makes one want to punch a baby. Mr. Robot has remained consistently good.

Previous article
Rick and Morty: “A Rickle in Time” Review
Next article
Major Update Coming To ‘Splatoon’ on August 5