“Hello, friend. “Hello, friend”…that’s lame. Maybe I should give you a name. But that’s a slippery slope. You’re only in my head. We have to remember that.”

If Dexter ever met Tyler Durden inside The Matrix, you’d have an idea what to expect from “Mr. Robot”. Starting June 24th, USA Network’s newest techno-thriller show ditches frantic keyboard jockeys typing inhuman batches of code at 732 words per minute and telling the room “we’re in” and, instead, assumes a sleek and meditated approach.

The show’s star, Rami Malek (who, before this, cut his teeth on TV fare such as “Gilmore Girls” and HBO’s World War II drama, “The Pacific”) plays “Elliot”, a sweet, unassuming cyber-security code monkey who, by night (always a fun plot device), becomes a cyberpunk Batman, donning a hoodie instead of a cape.

In the first half hour of the show, we learn that Elliot is your prototypical “tortured soul”. He uses morphine to drown out the crushing depression and sadness which plagues him (stemming from a terribly abusive childhood) and his only real physical connection comes from his dealer who he screws from time to time.

“I wish I was normal,” says Elliot, revealing his desire to escape both his personal demons and his own horribly cynical view of the society he inhabits. He crushes on Angela Moss (Portia Doubleday), his blonde co-worker and childhood friend. But he won’t act on his feelings — or reveal that her boyfriend, Ollie Parker (Ben Rappaport), is a lying, cheating scumbag. “Angela has shitty taste in men,” he tells us. “but I can’t tell her about Ollie because I’m afraid what would come next.” 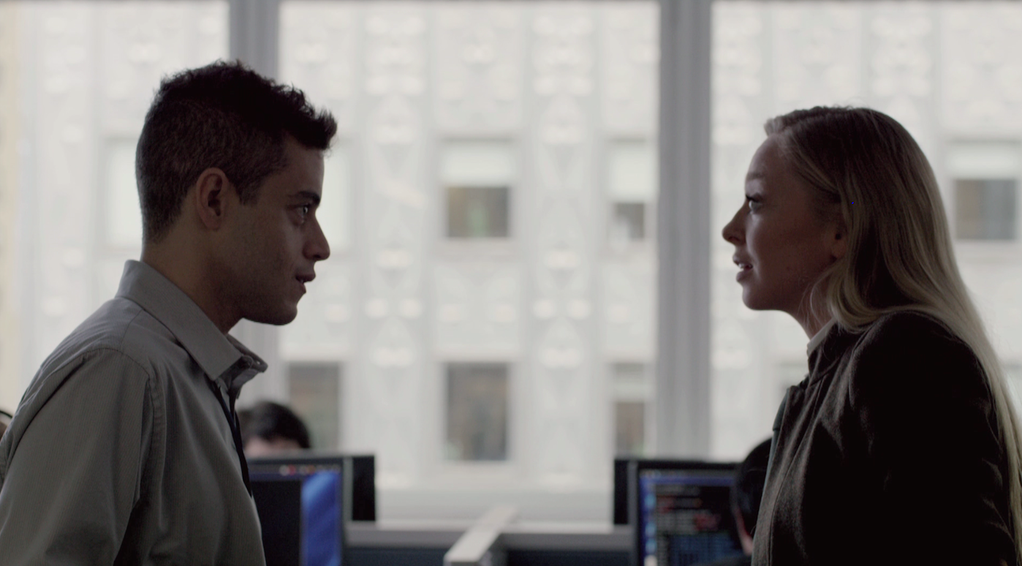 It’s this fear that keeps Elliot in check. Even though he silently rages at the world’s many injustices, he picks and chooses his battles in order to make their “the phony world” a little brighter. While entertaining the notion of wiping out Angela’s student loan debt, he manages to use his skills to expose a one-man child porn ring and forces a married man to break up with the therapist (Gloria Reuben) Elliot sees on a regular basis. Elliot’s awful paranoia (he believes he’s constantly being followed by a group of men in black suits) is the reason he’s even there — and it’s because his therapist has been so kind and helpful that he’s willing to help her in return, for better or worse.

The main crux of the plot deals with Elliot’s security firm dealing with repeated cyber attacks against their biggest client, “E Corp” which even Elliot’s superior, Gideon (Michael Gill) and colleagues dub “Evil Corp” due to their ominous influence on everything from food to technology to science and research. It turns out millions of dollars are being siphoned from the company at an alarming rate by an unknown attacker. This fascinates Elliot and he eventually proves smart enough to I.D. the file causing the mayhem, isolate it and stop the attack — but he secretly keeps the code instead of deleting it as it “scratches his mind”. The file in question (labeled “fsociety.dat”) turns out to be the creation of “Mr. Robot” (Christian Slater), a mysterious hacker whose primary goal is the total financial destruction of Corporate America who, in his opinion, has run amok and bankrupted the common citizen. Robot reveals that the hack was a test and had Elliot failed to stop it, he wouldn’t be offering Elliot a seat with his secret regime. 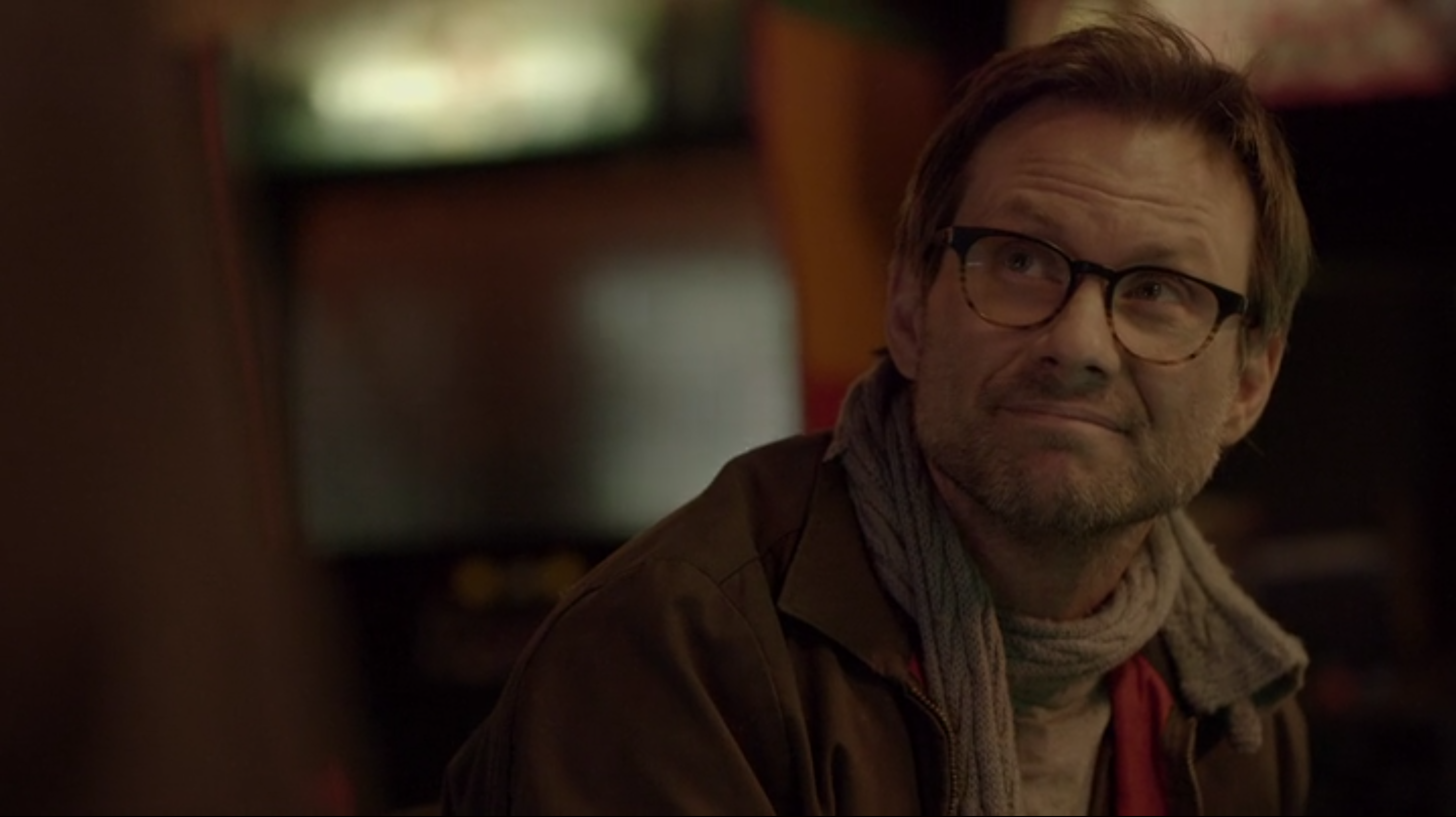 Initially fearful of “what might happen” if “Evil Corp” (complete with a parody of the Enron logo — I wish I was making that up) was ever knocked over, Elliot eventually decides to help Mr. Robot in his quest to bring about “financial redistribution” on a grand scale, for better or for worse.

The show comes into the land of television with a nice amount of street cred, having scooped up the Audience Award at the South by Southwest Film Festival and, after viewing the pilot, it’s easy to understand how they were drawn into it. It has an intriguing premise and the cliffhanger-style climax leaves you wanting more. Helmed by the director of the original “Girl With the Dragon Tattoo” film, Niels Arden Oplev (and co-produced by Propaganda Films, headed by David Fincher, the director of the remake of the aforementioned film), the show has a very cold, concise and neatly-aligned ambiance.

But its strengths are also its weaknesses.

It’s obvious that head show-runner Sam Esmail is not enthralled with the status quo in America and this is his attempt to shake everyone awake. I applaud that. I love bold material. The way he goes about expressing his gripes, however, is flawed. Forgiving the fact that he apes the hell out of Fight Club (while channeling Peter Finch all the live long day), Esmail seems convinced he’s giving us V for Vendetta when, in reality, it comes off more like a digital-age Reefer Madness with all the substance of the goofy political conspiracy click-bait puffery and rhetoric seen on the wall of your crazy uncle’s Facebook page.

At one point, Elliot rants about the world to his therapist, condemning all the broken promises of our politicians and flaming the “heroes” we idolize. Here, he goes after Steve Jobs who “made his money on the backs of Chinese sweatshop workers”, then Lance Armstrong for doping — valid points if there ever were — but then, for reasons I can’t even fathom, he references Tom Brady because of the over-hyped “Deflategate scandal” which only ESPN cares about.

So, that’s a thing that happened.

The generic ranting is heavy-handed and simplistic. It has the unfortunate effect of reducing everyone who isn’t Elliot to caricatures and flat stereotypes. The good people are sweet, helpless individuals who need saving from their douchebag boyfriends while the bad guys wear dark suits and are three seconds away from an actual “MWAHAHAHAHA” session in their Corporate Castle of Doom.

And then there’s Elliot, saving the world in his Super Hoodie. This makes a great deal of the show hard to take seriously.

If you think I’m kidding, take the big bad boss of “Evil Corp” (Bruce Altman) as an example: he sneers and acts like an asshole and arrogantly browbeats Angela during a meeting — and that’s like two seconds into his character’s introduction. He flies off the handle so fast, I was left unimpressed. So much so, in fact, that I couldn’t even bring myself to hate him. His entire demeanor and attitude screams “VILLAIN!!!” so loud, it would blow out any set of speakers if it were actually vocalized. It’s even worse when we finally get our first look at the real people in charge and that’s more of an annoyance than anything else. 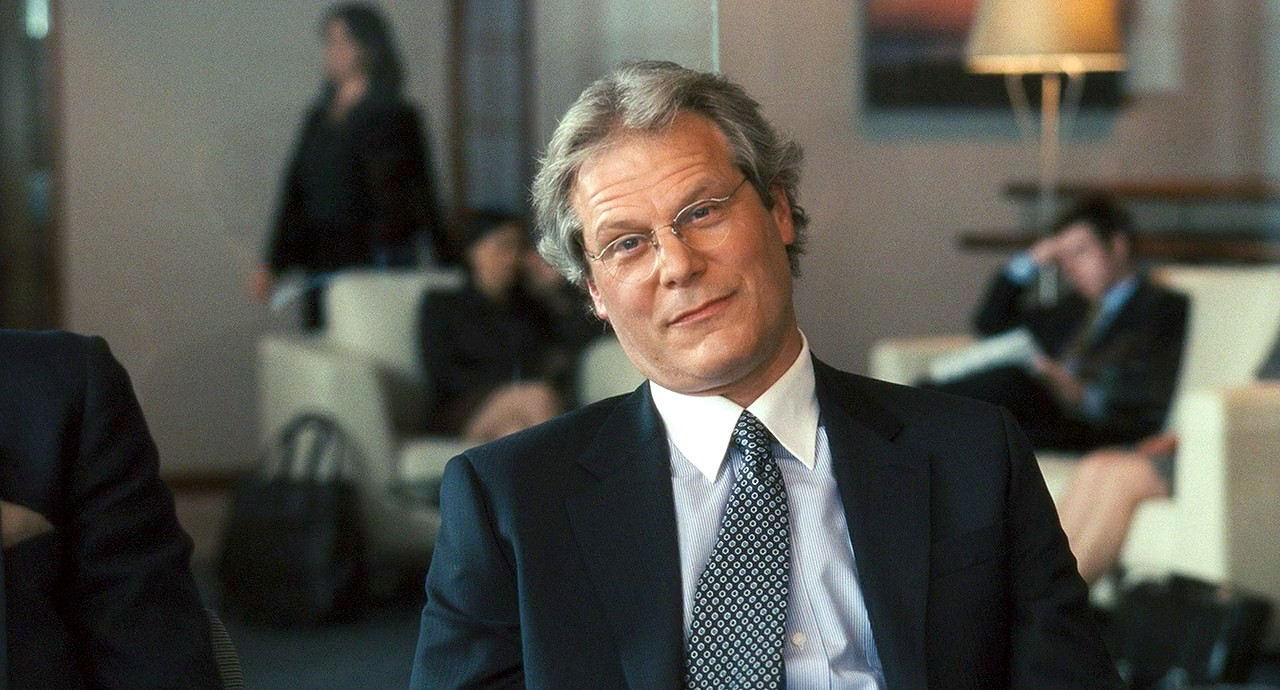 The other issue is that there isn’t much to this — and that creates a potential problem for the show’s future.

Mr. Robot’s grand plan to trigger a financial meltdown makes absolutely no sense on any planet since all financial records are backed up offline to prevent that sort of thing from happening. One could argue that Robot’s plan is more involved and highly intricate, but he never truly confirms that, so the audience is left to assume that everything Robot plans is simple as pushing a button. This, of course, doesn’t really present anyone with a sense of danger or velocity — especially since the Evil CEO is basically a Jabba the Hutt without the intimidation factor or a girl in a slave costume — and when he crashes and burns, a Reddit Shrug seems to be the only appropriate reaction.

One could speculate that being hit over the head with a giant bat is the whole point and that this is a portrayal of the only person who is truly “aware” while everyone else is a colorful product of their environment that they’ve accepted as “safe” — but it still results in forced theatricality.

Despite these faults, the show does work thanks in large part to Malek who is every single superhero you know and love. He has the power to move mountains or destroy one human being — all by using a computer. He’s so likeable, you want to keep watching because you care about him more than anyone else on the show. The cast and crew has crafted a nice indictment on the wealth gap and I’m very much interested in seeing where it goes — even though I’m sure it won’t come close to topping the promise shown in the pilot.