If you loved Moonlighter, you’ll enjoy it’s DLC, Between Worlds.

Moonlighter is an adorably pixelated indie game that focuses not just on dungeon crawling and crafting but the merchant side of killing beasts, as well. By night, your protagonist Will takes to the local caves, killing all manner of enemies in procedurally generated dungeons. By day, Will takes those hard-earned mob skins and claws and whatever else they drop when he beats them to a pulp and sells them in his local shop. It’s an interesting play on the typical fantasy tale, focusing more on the town aspect of where warriors get their goods before they head off into battle. As Will the merchant, you play a capitalist guessing game based on customers’ reactions and adjust your prices accordingly. And despite some of the bugs at launch, I couldn’t help but praise Moonlighter because it is such a unique premise.

A year later, Digital Sun’s Moonlighter has released its first true DLC and with it comes another major dungeon, more weapons, and a bunch of town and story upgrades. You’ll really get the full use of the DLC once you’ve beaten the main game and choose to continue the story. 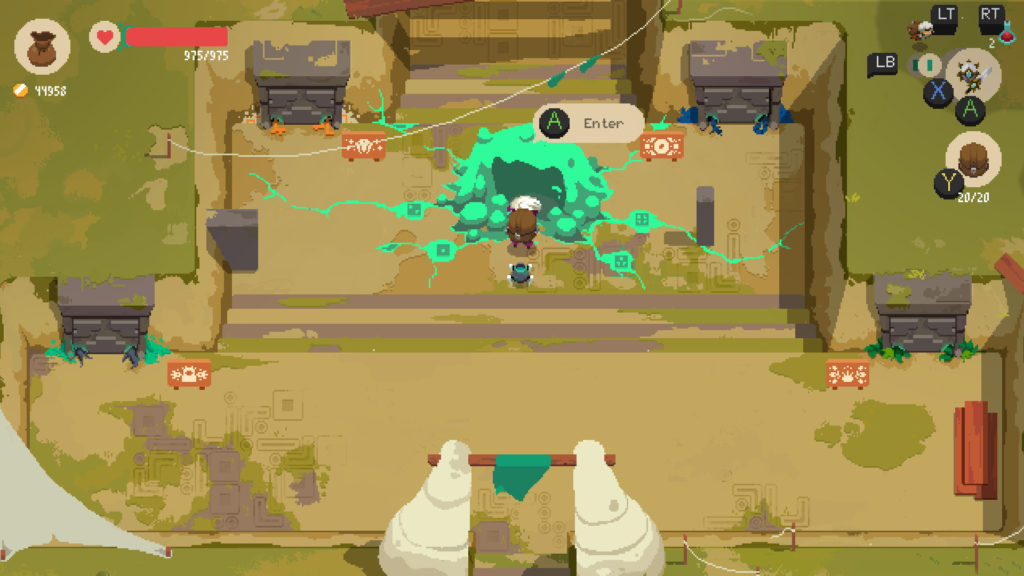 The biggest feature of Moonlighter: Between Worlds is a brand-new interdimensional dungeon, complete with 10 randomly generated floors of dungeon crawling goodness. It’s here that you’ll get most of the content in the DLC, making full use of a new armor and weapon set and two new companions for Will’s entourage. With more gears means more baddies, and Between Worlds introduces 10 new enemies, as well as 5 minibosses. Since Between Worlds encourages players to explore older dungeons for the sake of acquiring long since used crafting items, the minibosses are a much needed addition to keep old dungeons from feeling stale. 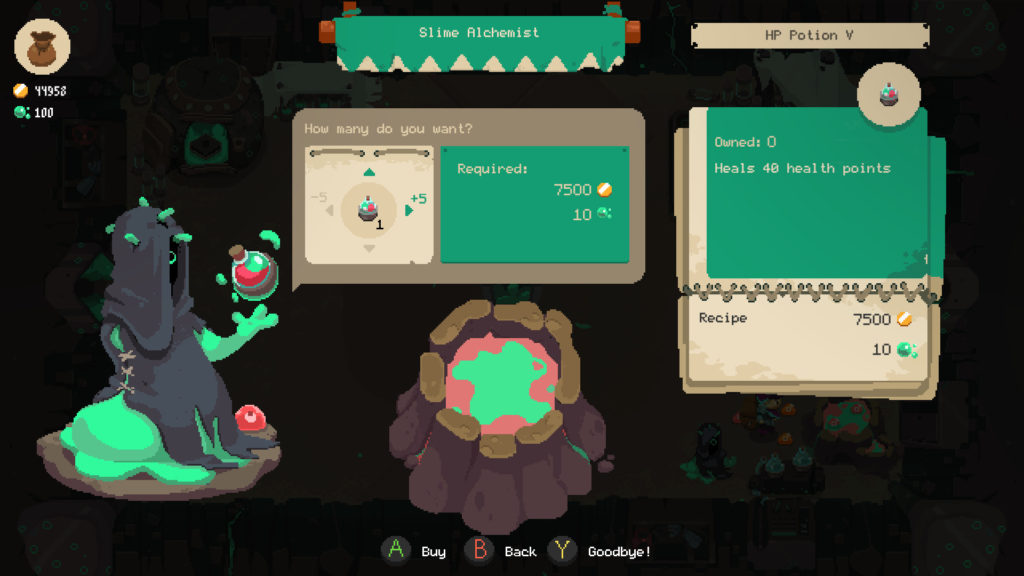 Perhaps the best portion from Moonlighter’s DLC is the new Slime Alchemist shop, accessible only within the interdimensional dungeon. Once Will reaches the second floor (and every other floor thereafter), he can talk with the oddly friendly merchants who use a slimy currency acquired by beating mobs within the dungeon itself. But be forewarned, once Will leaves the dungeon, the currency disappears, and should he want to buy special items from the spectral merchants, he’ll have to fight more monsters to get it. These merchants offer Will potions, portals, and even an assortment of weapons, that like their currency, also disappear after leaving the dungeon. Each miniboss in the DLC dungeon drops an item, be it a blueprint or the actual slime weapon, but the bonus to this gear is that it’s often significantly more powerful than even the best items from Rynoka’s blacksmith. If you’ve got the slime to spare, it’s more than worth it to give the weapons a go.

Other additions for Moonlighter: Between Worlds include: more rings for the New Game Plus players, a couple of additions to Will’s Shop, especially since now he’ll have to suss out interdimensional loot prices, and finally, a new NPC: the Trader. The Trader is an interesting character in that he introduces haggling to the once sleepy town of Rynoka. Long gone are the days of set prices; the Trader allows Will to barter over the amount of items he’s willing to trade for rarer, more in-demand artifacts, including items found only at the Trader. If you want to upgrade your endgame weapon and armor sets, you’re going to have to do business with the Trader. 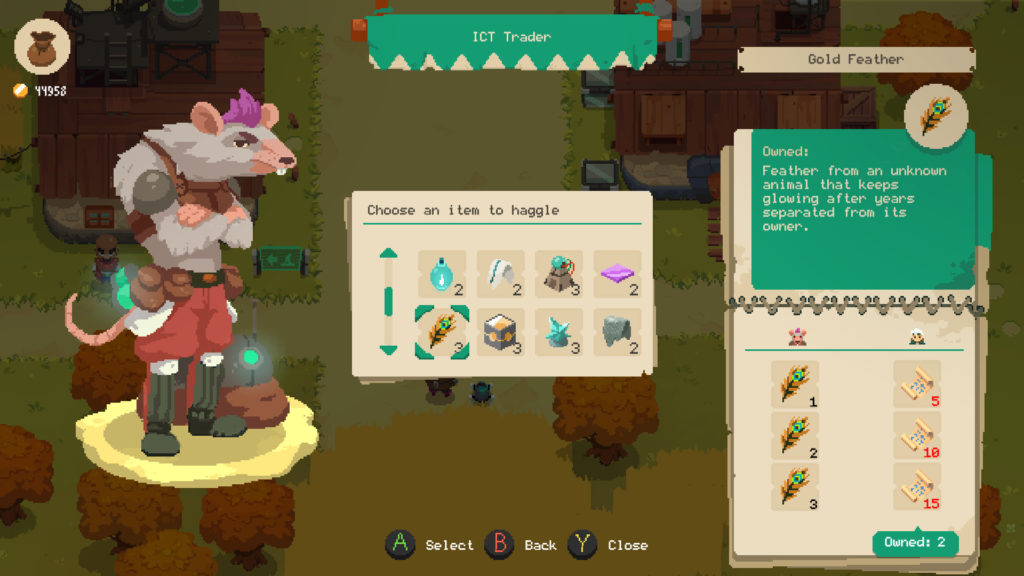 Unfortunately, Between Worlds still suffers from some of the issues that plagued the base game. Bugs keep players from completing achievements; the final rune bow is impossible to craft because the item needed to create it doesn’t exist in the game; the final boss can get stuck in unreachable terrain, causing the player to rely on companions or restarting the fight; customers can get stuck in merchant tables, fixed only by reverting to an earlier save; and most irritatingly, exclamation marks persist above NPCs and chests, despite clearing them of the seen information.

On top of the more glitchy problems, combat still doesn’t feel quite right in Moonlighter. Despite playing on PC, I recommend using a controller because the default keybindings are unnatural and infuriating. Some enemies land hits and do damage despite nailing the dodge combo and one of the mid-tier dungeon enemies still manages to steal items at random, without any chance to recover them (something even the final boss allows). 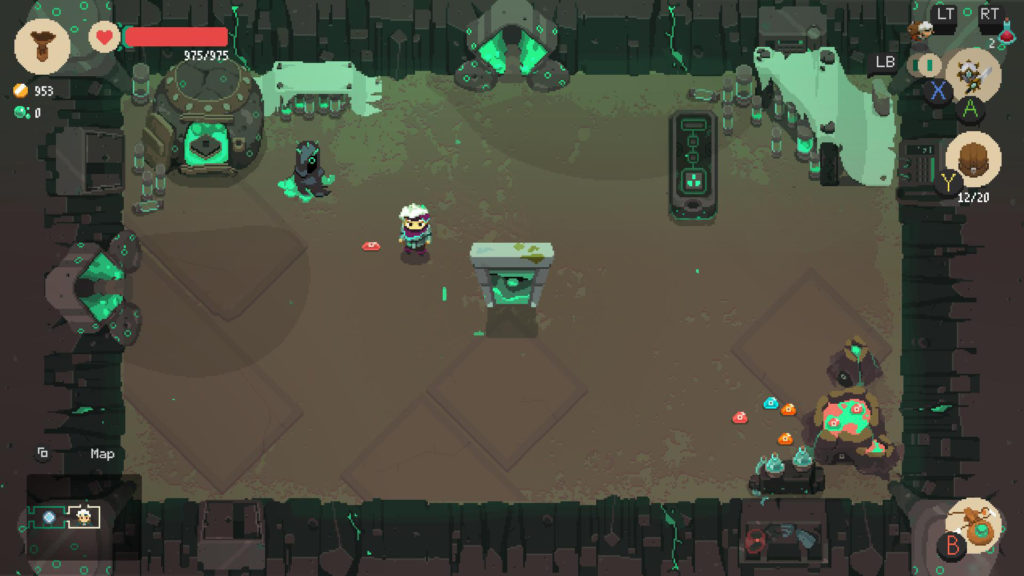 The shop pricing mechanic remains the most unique part of Moonlighter and while I think it’s simply fine as it is, for any planned sequel, I would like to see the developers explore more aspects of the supply and demand. Originally, I believed the customers’ varying levels of interest in an item correlated to how often I sold it, but instead it seems to only be connected to an original selling price. Once I found that sweet spot for an item’s price, managing Will’s shop became automatic and the only change was at which point during the day that stupid bird bring every NPC to a standstill. Moonlighter has the building blocks for an immensely unique gaming experience and with time and tweaks to keep the game from feeling too stale, it could be one of the better action adventure games on the indie scene in recent years. It’s a brilliant mix of retro art design with more modern gameplay elements, all wrapped in a package that doesn’t take a few dozen hours to complete. You can beat of the dungeons in a day or two and not feel drained or like you’re rushing through content.

As it stands, Moonlighter is still an adorably unique experience that has done well to emulate that Stardew Valley feeling of “just one more day”, keeping gamers interested until that final end credits screen appears. Between Worlds is a great addition to the story at large, giving players a satisfying conclusion to the base game and adding enough content to feel new and exciting while maintaining the pieces that made the base game so enjoyable. For the price at $6.99, if you enjoyed Moonlighter, Between Worlds DLC is more than worth the cost.